Court Ordered Rehab: Everything To Know 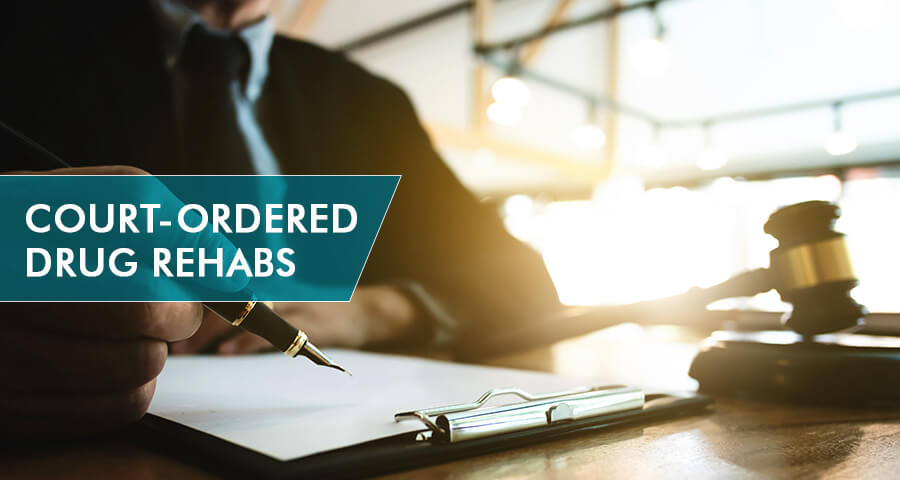 What is court ordered rehab?

Court ordered rehab is something the defendant of a drug-related crime might have to do in lieu of going to jail. If the judge and the prosecution believe that a defendant would benefit from rehab, they would rather try to help that person than put them in jail.

Court ordered rehab, as the name implies, is a mandatory rehabilitation from a drug or alcohol addiction as ordered by a judge as part of a court ruling. It is usually in lieu of a prison term which is a punishment that might not have matched the nature of the crime. It’s a common occurrence for law-breakers who were under the influence of a substance, be it illicit or legal, when they committed a crime to be ordered to participate in a compulsory rehabilitation program.

Such people are addicted to alcohol or other drugs which impair their judgment and lead them to commit a relatively minor crime. At other times, it’s the driving force behind a crime as an offender may steal or partake in some illegal activity just in order to acquire some money to feed the addiction.

People who are ordered to go through court-ordered drug treatment are mostly just regular people. If the crime committed is not violent in nature, the judge has an option of ordering a court-mandated drug program instead of prosecution or incarceration.

The main aims as far as the law is concerned is the complete rehabilitation of the offender and to ensure that the rehabilitated individual does not graduate into even more serious crimes. So a desire for success is very high.

It makes sense to achieve this end with the littlest amount of stress possible, both to the government and the defendant. This is why it is sensible to look before leaping to just any court appointed rehab center available. There is more to it than meets the eye as all rehab centers are not equal or equally suited to everyone.

An emergency court order requires a screening investigation, in which both police officers and addiction professionals take part. The person is taken into custody to determine if they qualify for an emergency order. If they are found unable to control their actions, use drugs every day, are suffering from health problems caused by drug abuse, and behave in ways that threaten the health and safety of those around them, an emergency court order becomes a distinct possibility. A court hearing will be scheduled, at which the addict’s family plead their case. The authorities have the last word.

How to Get Court-Ordered Rehab – Qualifying

Court-ordered rehab is a form of mandatory rehab for drug or alcohol addiction as part of a court ruling. Courts recognize that a prison sentence might not always be the best option. Addiction can impair judgment and lead one to commit a relatively minor crime. It can be the driving force behind a crime as an offender may steal or commit another illegal act to get money for drugs. If the crime committed is not violent in nature, the judge has an option of ordering a court-mandated drug program instead of prosecution or incarceration. The main aim is the full rehabilitation of the offender to prevent him or her from committing a more serious crime down the line. Court-ordered rehab is a way to achieve this with the least effort and stress possible, both to the government and the defendant.

The court may order rehab instead of jail time if the following criteria are met:

Who is Eligible for Treatment instead of Incarceration?

To be eligible for court-ordered rehabilitation, a person would need to meet some requirements. If all of them are met, then the offender should be able to apply for drug treatment instead of going to jail for a minor crime. These conditions are:

Do I have to pay for rehab if it is court ordered?

Yes, in most cases the defendant must pay for rehab eve in it is court ordered. The defendant also has the right to choose the treatment center, allowing him or her to consider a number of factors, including cost, when deciding where to go for treatment.

When an offender is placed in drug or alcohol treatment, it does not negate a sentence until the treatment has been completed successfully.

Participation in a drug court is not mandatory but to be eligible, the defendant must have pleaded guilty to the crime he/she has been charged with and be willing to go through the court mandated drug treatment. The offender once checked into rehab, is expected to abide by some or all of the following terms:

There are several programs that have been put in place to assist people addicted to alcohol and drugs to beat the addiction while avoiding all or part of a jail sentence. Depending on the type of crime committed, a specific drug intervention program will be selected for the defendant.

Who Pays For A Court Ordered Drug/Alcohol Treatment?

The court is never required to pay for a person’s addiction treatment. In most cases the defendant must pay for rehab. The defendant also has the right to choose the treatment center, allowing them to consider a number of factors when deciding where to go for treatment, including cost. This flexibility means the defendant should choose according to specific criteria that will ensure the treatment does not become tiring and tedious. Costs of treatments vary widely, among other factors. If treatment is not affordable, some centers offer sliding payment services or allow clients to pay over a longer period of time. In states where “Casey’s Law” is effective, anyone who petitions for court-mandated rehab must find a way to pay for it. They have to sign a legally binding agreement on the terms of payment. Private drug treatment programs can cost thousands of dollars, but there are many free rehabilitation centers across the US.

Health insurance could help cover rehabilitation. After the Mental Health Parity and Addiction Equity Act was passed in 2008, insurance companies cannot enforce harsh benefit limitations on people suffering from addiction or mental health disorders. Unfortunately, this law focuses mainly on large group health plans, such as those employers provide. It does cover individual policies, but it can be more difficult to find ones that fully cover rehabilitation. If court-ordered rehab is anticipated, it may be a good idea to call the insurance company and discuss coverage options. The company should make an effort to find a plan that at least partially covers treatment.

The Bureau of Drug and Alcohol Services offers a number of non-profit centers aimed at helping people struggling to finance their treatment. Inpatient and outpatient services are provided based on a sliding fee. This fee is calculated according to personal income and savings, meaning the patient won’t pay more than they and/or their families can afford. If the patient has no income, they may not have to pay for treatment at all. As these centers are set up for court-ordered rehab and other forms of crisis intervention, the likelihood of getting access to them is high. Judges are inclined to send defendants to sliding fee centers, because these offer relatively comprehensive rehab programs.

Families of addicts are often concerned whether court-ordered rehab will prove effective. It would seem the success rate wouldn’t be very high as people are practically being forced into treatment. However, the effectiveness of court-mandated treatment hinges entirely on intrinsic motivation – that is, the motivation of the person in rehab, not external factors. Data of the NIDA and Department of Veterans Affairs Health Services Research and Development Service show that mandatory rehab is just as effective as voluntary rehab. A group of men who underwent court-appointed treatment for alcohol and drug problems reported lower levels of motivation at the beginning of rehab. However, their rates of employment, re-arrest, and abstinence five years later were the same as those of peers who had undergone voluntary rehab.
Results of shorter-term studies have shown similar outcomes. A study by the National Criminal Justice Reference Service on coerced treatment effectiveness stated that the person in treatment ultimately “decides upon the outcome” even though court-appointed rehab and other coercive methods of treatment were often shown to be effective approaches to motivate a person to change for the better. Basically, if a person feels no need or doesn’t want to change, they aren’t likely to do so.

All individuals put into a court-ordered treatment program on drug-related criminal charges, including charges their families have made against them, have to complete their treatment as part of their punishment. If they fail to do so, they face prosecution for their crime to the fullest legally permissible extent (in cases of deferred prosecution programs). They may plead guilty, but they will face the conviction and fine that come with the plea. Depending on the judge, the sentence pronounced may be harsher if someone has failed a treatment program. If the person pleaded guilty before the court ordered rehab, they are taken back to court to face sentencing based on their earlier plea (post-adjudication program). They will likely face a minimum of the sentence previously served, although this is subject to adjustment by the judge as they failed to complete treatment. They can change their plea to “not guilty,” if they choose, but their case probably won’t be successful given the circumstances.

If the program is completed, on the other hand, charges are dropped. This model typically applies in cases where the person doesn’t have a criminal record or has had very few legal troubles. Also, the crime will not show up on their record. If the person has pleaded guilty to the crime and received a sentence and a fine, these will be dropped upon successful completion of the program. This method applies when the person has a prior record.

Court-ordered treatment is frequently an effective way to shock a loved one into realizing what problems their abuse has caused. In this situation, most people will get serious about treatment. This may not guarantee a successful outcome, but there is no fail-safe approach to addiction treatment. Only the commitment and willpower of the person in recovery can ensure positive results. Court-ordered rehab forces them into circumstances, in which they have to consider becoming and staying sober. This is often a crucial first step, as they come to see the possibility of leading a full, satisfying life free of drugs and legal troubles.