Demerol Addiction, What Are the Signs, Effects and Dangers of Abuse

Demerol is a narcotic and is under the brand name of Meperidine. It’s an opioid painkiller for the treatment of moderate to severe pain. Overusing Demerol can lead to addiction, and addiction can cause severe withdrawal symptoms, such as confusion, floating sensations, difficulties in concentration and high delirium.

Demerol is the brand name of Meperidine. In 1939 the drug was first shown. It’s an opioid painkiller for the treatment of moderate to severe pain, often after surgery or before childbirth. Like any other opiate, the drug has different side effects that can be lethal, such as breathing problems, and can lead to dependency and addiction.

Why is Demerol addictive?

Demerol is an opioid drug and pain medication, and like any other opiate, it can lead to dependency – just like heroin. Every year many people who’ve been given the drug due to chronic or acute pain or who have sought some recreational effects, such as sedation and blissfulness, get addicted to the drug. Addiction can cause severe withdrawal symptoms.
Demerol (Meperidine) is an opioid painkiller used for the short-term treatment of mild and severe pain-related signs (in surgery and labor, etc.). Also, patients who suffer from constant pain should not use it, but it should apply to acute pain symptoms.

Note that the long-term use can lead to intoxication.

Like any other painkiller, the best time to use the drug is if one notice any symptoms and pain.

They made the drug initially in 1939, and its painkiller traits became very popular. It comes as:

Demerol is one of the prescribed drugs, a narcotic, and that’s why it should be taken accurately, even when given by a health expert. One of the main dangers is that the drug can slow down the breathing (especially in older patients).
It should be applied carefully to patients with:

It’s curious to mention that drinking grapefruit juice while taking the drug is not recommended because the juice can cause an increase in the Demerol levels in the blood.

There are many side effects, and a severe allergic reaction (swelling, hives, and rash) is one of them. Common complications are:

Also, Demerol can cause hallucinations, mood swings, and stress and other signs of drug use.
Another uncomfortable effect is lower sex drive, missed periods (in females) and impotence. The drug can also lead to infertility. It shouldn’t be used while pregnancy or nursing as the medicine can cause inherent disabilities. However, it can be used during labor.
Another danger is that its interactions with other drugs. Always inform the doctor if other opiates have already been using, including cough medications, sleeping pills, or depressants. 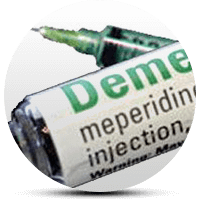 Demerol is an opioid painkiller, and as such, it can lead to dependency. Physical withdrawal symptoms and cravings can be strong and painful.
There’s a strange event in our culture: illegal drugs, such as heroin, are not so popular anymore in comparison to pills like Demerol. Also, the typical user is not a middle-aged housewife with an addiction to pills and painkillers, in particular: many men turn to tablets as a relief of physical and emotional pain as well.
Unfortunately, many teens also abuse the drug using someone else’s pills. Therefore, never let anyone use pills given by the doctor. Do not forget that it can be lethal.

As it can be a strong medicine, the drug can be addictive. Some people develop an addiction as a result of their pain treatment.

Others, however, abuse it due to its recreational values, so after that users need to look for addiction treatment in a certain treatment center.

On the streets, the drug is called Dillies or Dust, plus many more slang names.
Like other opiates, the effects of the drug can lead to a state of deep sedation and relaxation. Some people describe the Demerol high as blissful. In a study by Walker and Zacny, they describe the drug as very intoxicating, leading to:

Many reasons can push a person towards a drug-seeking behavior. Most often when they don’t treat the addiction, adverse social, family and job-related problems can occur. Also, withdrawal symptoms can be painful and uncomfortable. Also, if the addiction has other disorders, such as anxiety attacks or schizophrenia, the drug can be the cause of some bad behavior.
Pain is something that many people fear because it conflicts with their normal life. Treatment of pain should be one of the main aims in medicine. Some specialists, however, call Demerol “an old dinosaur,” which shouldn’t be in use to remove pain. Life without pain and addiction can become a reality, there are many options for Demerol addiction treatment.