How Long Does Rehab Take for Drug and Alcohol Addiction? 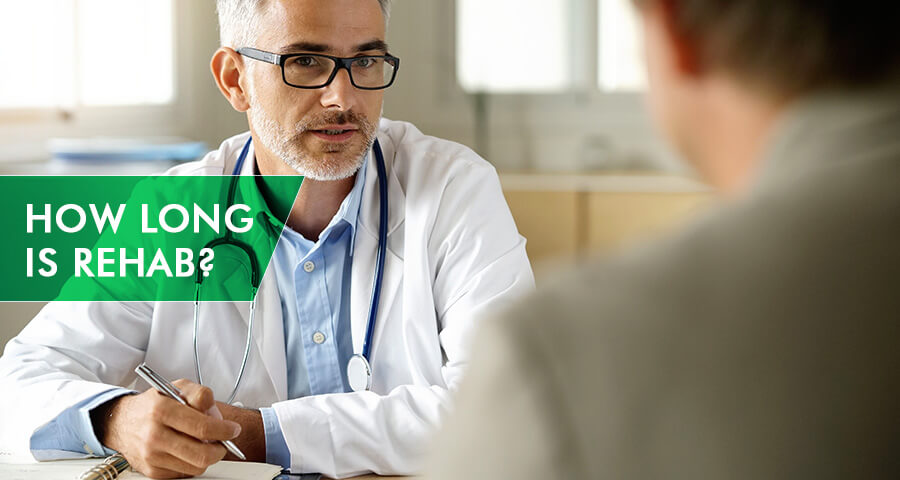 Recovery length varies greatly depending on the severity of one’s addiction: the person’s drug of choice; use habits like frequency and length of binges; and overall length of time that someone has been using or has been addicted.
There is no “fast track” to recovery; actual recovery takes significant time and effort.
While knowing the substance being used can often provide an idea of how long the detoxification process will take, simply detoxing is not recovering from addiction.
While cravings may lessen in frequency and intensity in a matter of weeks or months to minimal levels (comparatively), it may take up to several years for the brain to fully “reset.”

How Long Does it Take to Detox?

When people talk about “detoxing,” they are usually referring to the period it takes a person to detox medically, i.e. to remove the substance from one’s body completely. Determining a timeline for withdrawals is not an exact science.

The time it will take for someone to cleanse their body of a substance depends on many factors.

Withdrawal timelines can be influenced by such factors as:

These timelines are meant as rough guides to determine when symptoms will present themselves and subside. Another factor that affects when a person will start having withdrawals is the form of the kind of drug they are using—whether that form is fast-acting or extended-release. But one also need to keep in mind that drug recovery doesn’t end with the end of withdrawal symptoms. There’s a lot more to be done to recover from addiction successfully.

Note, that it might be dangerous to detox at home independently. The detox should be supervised by the medical specialist only.

With short-acting opiates, symptoms can begin as soon as six to 12 hours after last use.

Alcohol withdrawals tend to have more distinct phases than the withdrawal processes of other drugs.

Physiological symptoms may remain with the patient anywhere from a few months to several years.

Can One Do a Rapid Detox to Avoid Going Through Withdrawals?

Many people looking to break an addiction have heard of something called a “rapid detox.” During this procedure, a person is put under anesthesia and injected with a medication that will help the body purge itself of whatever drug from which the person may be detoxing. Sound a little too good to be true? That’s because it is.

Unfortunately, there is no quick, painless way to become “un-addicted” to a substance. People who do undergo “rapid detox” treatments still experience painful muscle and joint aches, diarrhea, vomiting, insomnia, anxiety, and other typical withdrawal symptoms after coming out from under anesthesia. Patients are often prescribed multiple medications to help manage these symptoms. A study published in the Journal of American Medicine that was performed by researchers at Columbia University Medical Center produced some other interesting findings:

It is likely this “rapid detox” procedure that people are referring to when they talk about three-day detox programs. These treatments usually end up being much more expensive than other detox alternatives and produce results that are not very promising at all.

These programs place someone in a safe environment in which they can detox with the help of medications and constant monitoring of medical professionals. These trained professionals know the physical and emotional effects of withdrawals and can provide relief and support during the worst phases of withdrawal. These programs should never be considered as “treatment”; they are meant as an alternative to those who may not be able to afford inpatient care or those who are not able to leave their home lives for the amount of time that inpatient care requires, often because of their children or occupation.

Outpatient services should be sought out after completing a detox program if a person truly wants to recover from his or her addiction.

The Different Parts of the Treatment Process

How Long Does Inpatient Rehab Take?

Inpatient programs include detoxing services and are typically available in 30-day, 60-day, and 90-day programs. Some facilities will allow extensions on these programs if an individual feels he or she would benefit from more time spent in treatment.

How Long Do Patients Use Outpatient Recovery Services for Drug and Alcohol Addiction?

Outpatient recovery programs can last anywhere from a few months up to a year, or sometimes longer. These programs may require anywhere from six to 20 or more hours of someone’s time per week.

The goal of these programs is to help patients recognize and alter their own cognitive behavior and lead to long-term sobriety.

How Long Do Patients Stay in Halfway Houses and Sober Living Communities?

Extended care facilities, often called sober living homes or halfway houses can be a good transition between inpatient rehab and going out completely on one’s own. Patients typically stay in halfway houses for one to six months, and up to a year. Sober living homes provide the option for people to stay longer, for a more gradual adjustment.
Schedules and daily activities are monitored, but these environments allow the patient to be able to work, attend school, and participate in other activities (such as outpatient recovery services) that will contribute to a productive and sober life.

Full recovery may take years. As one Intensive Outpatient Program member put it—“Sitting at two and half years sober, things are way easier than they were during the first six months or even the first year… But, when I put things into perspective, I did extensive damage to both my brain and my body continuously for a period of 25 years; if I feel anywhere near ‘normal’ at five years into sobriety, I’d say that’s a pretty good deal—five years of work to repair 25 years of damage.”
Recovery will be a lifelong journey. Many people are able to “rewire” their brains to never desire a substance again simply because of all the pain it has caused them. Others may struggle for longer.

Regardless of whether a person reaches that point completely, the struggle does get easier over time.
View Sources
Share:

Addiction Resource » Rehab Questions Answered: What Everyone Should Know About Rehab » How Long Does Rehab Take for Drug and Alcohol Addiction?