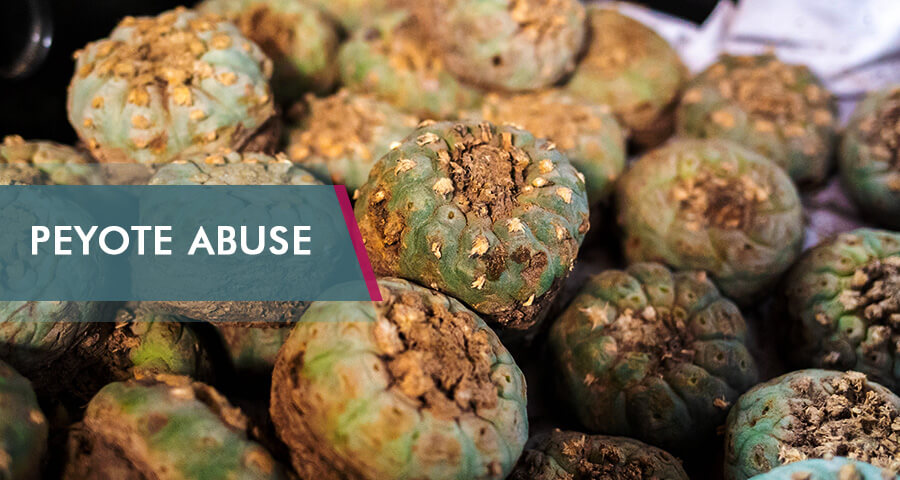 Just like with any other hallucinogen, addiction to Peyote should never be taken for granted. Peyote addiction is a serious medical condition that must be treated accordingly at the most immediate time possible. Otherwise, it may affect the life of the patient, just as it did with millions of Americans who admitted to having used the drug at least once, despite its prohibition.

A spineless cactus that is native to Mexico and Texas, Peyote has been used for thousands of years for spiritual purposes. It has served the same purpose for North Americans for the last 5500 years. Peyote has also been used as a truth serum by the U.S. military, as well as during tribal and religious ceremonies.
Peyote has disc-shaped buttons on the top, which are removed from the plant and consumed in different ways. Some slice and dry the drug for chewing, while others prefer to make ‘tea’ due to its bitter taste. Regardless of the method used, Peyote intake introduces Mescaline into the body. The latter is the active ingredient present in the drug that causes intense hallucinations and mind-altering reactions.
As an illicit drug sold in the streets, Peyote is also referred to as nubs, half moons, P, tops, and bad seeds.

Facts and Statistics: Proving Against the Common Belief

Due to the absence of a comprehensive and in-depth understanding of Peyote’s effects on the human brain, many people believe that the psychedelic is mainly ‘safe’ to use, and is not addictive like other illicit drugs. However, the immediate effects of the drug use prove otherwise.
Even without withdrawal symptoms that accompany Peyote use cessation, users are often psychologically addicted to the euphoric feeling and mind-alterations that the substance brings. Also, most users develop tolerance levels at relatively fast rates with this substance. Like other hallucinogens sold and used in the US and other parts of the world, Peyote causes flashbacks even when the substance is no longer being used as far as there is no definite time for Peyote to remain in the system.
Mescaline sulfate powder, which is derived from Peyote, is the purest and most addictive form of Mescaline. It is no longer surprising that Peyote is one of the most consumed hallucinogens in the country. From 2007 to 2008, the Monitoring the Future Survey recorded a 2.8% increase, from 5% to 7.8%, in the number of high school seniors who have used hallucinogens including Peyote.
Those who use Peyote most are generally 50-60-year-old white males. This may be due to the drug’s use in therapy, however also to its addictive qualities.

How is peyote used?

People use Peyote by removing the disc-shaped buttons from the top of the plant and either chewing them or using them to make tea.

Is is easy to quit peyote?

Yes, it can be easy to quit Peyote in comparison to other addictive drugs. Though quitting Peyote does not bring about physical withdrawal symptoms, a person may experience adverse psychological effects. For this reason, people addicted to Peyote should still seek treatment from a medical professional when attempting to quit.

The Dangers of Peyote Addiction

As soon as a person takes Peyote, there is no way to stop the hallucinations from coming. Most experiences involve the alteration of senses, such that colors and sounds are heard. Euphoria and an increase in energy and appetite are two of the most pleasing side effects of Peyote use. However, no matter the usual satisfying experiences brought about by Peyote use, the trips are highly variable. No one can guarantee a good Peyote trip as it depends largely on the amount of the drug that was taken, the user’s tolerance levels, state of mind, and physical and mental conditions.
Bad trips may occur at different times, and there is no way to determine when they will happen. Additionally, there is no definite and proven method to alter the trip to make it a good one. Bad trips result in extreme feelings, anxiety, fear, depression, and the like. People who are high on Peyote may resort to harmful measures whenever a bad trip occurs.

Is true that Peyote is safe to consume?

Contrary to popular belief, Peyote is not necessarily safe to consume. During a trip, users find it difficult to concentrate on even the simplest tasks due to the drug’s mind-altering properties. In addition, the intense emotions of fear, anxiety, and depression one may experience during a trip can induce suicidal tendencies.
Even in cases when a Peyote user has finally decided to stop using the drug, flashbacks may occur days, weeks, months, or years after the last dose. Flashbacks refer to sudden repetitions of past trips—making the previous addict experience the same feelings they felt during a particular trip. Not only do flashbacks bring back unwanted memories from bad trips, but may also cause the person to relapse.

Signs of Peyote abuse and addiction

Peyote is not a physically addictive drug. However, it is psychologically addictive and therefore, many of the signs of abuse are behavioral. These include sudden personality changes, mood swings, euphoria and unusual perceptions of reality. The few physical signs of abuse will be small changes, such as dilated pupils, appetite changes, and an altered heart rate. However, the signs of Peyote abuse will change depending on certain factors, such as the dosage, the environment and if the user has ever taken the drug before.
Furthermore, the drug can have more long-term signs of abuse. This is due to mescaline’s similarity to dopamine in affecting the way in which the brain works. Long-term, extensive abusers may present such signs of Peyote consumption as memory loss, flashbacks, and paranoia, the symptoms often resembling those of mental health disorders such as schizophrenia or dissociative personality disorder.

Due to its hallucinogenic properties, Peyote can have adverse effects on users lifestyle, such as:

These potentially negative consequences highlight the importance of responsible Peyote use.

Signs to Look For

Statistics show that people who use Peyote are at risk of feeling extreme emotions during bad trips that may lead to fatality, with suicide among the highest particular causes. Hallucinogens are proven to cause mental and psychological conditions such as schizophrenia, depression, anxiety, and the like. The first signs of danger are the inability to function normally without the drug and the insistent use of Peyote to experience its effects even in the face of risks and warnings.
People who are addicted to Peyote lose interest in school, family, and work. Their social responsibilities are taken for granted. On top of that, any person who uses Peyote may be apprehended based on the law.

Before any of these happens, Peyote addiction must be treated using professional techniques and strategies. While anyone can quit cold turkey without experiencing withdrawal symptoms, registering for an inpatient rehabilitation program is the best option for Peyote addicts.

Inpatient Rehabs allow patients to focus solely on the treatment without having to go through the pressures of daily life. In-house addiction facilities provide for a complete medical and psychological rehabilitation of the patient. Reliable treatment processes include specialized therapies focused on cognitive-behavioral areas and other psychological therapies that will help the user stay clean even during flashbacks.
When finding a treatment for Peyote addiction, the right rehabilitation program and center will not only help to quit the drug. They will help to build a resilient resolve to stay away from Peyote, or any addictive substance in the future.

Peyote – Use in Therapy

Peyote’s effects aren’t necessarily all negative. It has been used throughout history in tribes for positive reasons such as helping overcome addictions to other substances. It also has this potential in the modern world.
Traditionally it was used  in addiction treatment programs alongside chanting, dancing, and singing. Using these methods alongside social and behavioral interventions could help to treat addiction and other repetitive actions. Experts believe, in this situation, that the social group’s intervention is actually the more important aspect of overcoming the addiction, and that Peyote may merely, to an extent, be a placebo. However, the visions induced by Peyote are manipulated to show the negative effects that the abused drug can have. This is performed in the hope that it will deter the addict as well as bring them a sense of enlightenment and control over their issue.
Furthermore, due to the residual effect of Peyote, the drug continues to help after initial therapy. This means that patients then respond better to follow up treatments and therapy sessions.
Therapy with Peyote is also designed to help with personal development as well as drug addiction. Peyote allows for increased honesty, self-awareness and integrity, meaning those undergoing therapy can improve personally as well as in their behavior. It is often considered to have similar benefits to meditation.

Peyote abuse has not only affected abusers but the plant itself. The cacti are now considered an endangered species so they are only cultivated in a small amount legally. However, illegal cultivation to abuse Peyote is still an underlying issue.
If undergoing therapy with Peyote,one should make sure it is legally sourced. If not, there are various alternatives that can be used during therapy that have just as much mescaline.