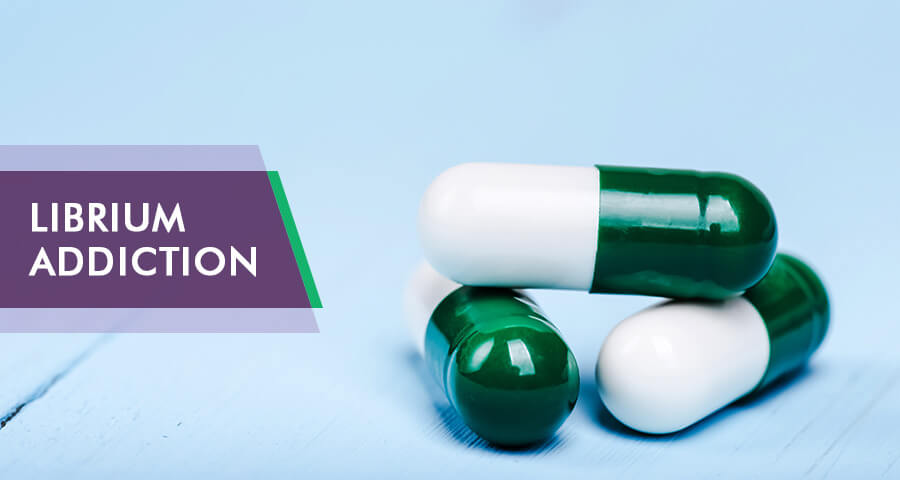 Librium was the first in the class of benzodiazepine drugs and was discovered by accident in 1957 when scientists discovered its medicinal properties while trying to create an artificial dye.

The drug Librium is primarily used by those suffering from severe and debilitating anxiety disorders. It has a strong sedative-hypnotic effect and is a
relaxant for muscles. Unlike some of the newer benzodiazepine drugs, Librium acts on the nervous system more slowly, with its peak effectiveness being reached several hours after ingestion. Its half-life is 24-48 hours. Like other drugs in this classification, however, Librium causes feelings of extreme relaxation and euphoria, which makes it especially appealing for those with severe anxiety, phobias, and panic disorders.
Those who are addicted to Librium should seek professional treatment immediately.
Librium side effects can include:

Overdose on Librium can occur. Symptoms of overdose may include:

Who is at risk?

There are several primary groups who may be more at risk of becoming addicted to Librium, and many different factors are at play when it comes to who will become addicted and who won’t.
Veterans are a high-risk group for this reason, as they often suffer from trauma brought on by deployment and extended periods of time spent away from loved ones. They may be prescribed Librium or another anxiety medication help them deal with symptoms of post-traumatic stress disorder, but this can quickly become an addiction.

How To Identify If Someone Is addicted to Librium?

Someone may be addicted to Librium if:

Those who have high-stress professions are also more likely to abuse prescription medications like Librium.

Other variables that may lead to Librium abuse:

Drug abuse – Many people who become addicted to Librium, much like those who abuse other benzodiazepine medications, are poly-abusers. That means they abuse multiple substances at the same time. Some use Librium to counteract the effects of illicit drugs such as cocaine and heroin. Others mix Librium with alcohol to intensify the euphoric effects of both. This makes overdose a very real and dangerous possibility, especially as higher doses of the medication become the norm.
Mental illness – Those with existing mental illnesses, such as anxiety and depression, may be more likely to abuse Librium. This is true both because it is prescribed to those with anxiety disorders, and thereby, they have the most comfortable access. Additionally, it is commonly used with other drugs, which are often used by those who are looking to self-medicate their mental illnesses. Because Librium withdrawal symptoms can be so severe, using Librium for mental illness for long-term effects is highly risky. This drug is also commonly used by those attempting suicide.
Parental involvement – Like many drugs, Librium is often abused by teens and young adults. This is due to many factors. For one, those who have parents who take this prescription may have easier access to Librium than to other drugs. Those whose parents or another close relative are drug abusers themselves also have a higher risk. This is both due to a genetic component, as well as the fact that teens learn by example.
Gender – Studies show that men may be more likely to abuse drugs than women. That said, women may be more likely to seek professional help for anxiety and depression, due to the stigma surrounding men taking medications for mental illness for fear of appearing weak or not masculine.
Anyone who comes into contact with Librium is at risk of becoming addicted. Users should practice extreme caution during their medicated period, and should only use Librium with doctor’s supervision, but not to get high for recreational purposes.

It can be hard for addicted to Librium to talk about the existing problem. This issue becomes even more complicated by the fact that drug abuse shares many of the same symptoms like depression, anxiety, and other issues often treated by benzodiazepine drugs.

How long does it take to become addicted to Librium?

One can quickly become addicted to Librium if it’s used for more than a few weeks at a time. Librium produces effects such as feelings of euphoria, relaxation, and even pain relief. These effects have proven to be especially appealing to those with severe anxiety, phobias, or panic disorders.
When trying to determine if a loved one has a drug problem, one may notice all of the above, as well as some additional warning signs, such as:

If any of these signs have been noticed, it is highly advised that one consider enrolling in a drug addiction treatment immediately.

There are over 50 million prescriptions for benzodiazepines, such as Librium, every single year.
In the year 2010, there were nearly 23 thousand deaths due to drug overdose.
Approximately 10-15 percent of all Americans have some form of painkiller, such as Librium.

Overcoming an addiction to Librium can be challenging, especially since many users are also addicted to other substances as well. While some may be tempted to try and go it alone, seeking professional help is the best option when it comes to getting and staying clean. Statistically, most people who attempt to get clean on their own will eventually relapse.

What type of treatment is best for Librium addiction?

Inpatient rehabilitation is considered to be the best type of treatment for Librium addiction. Seeking professional help significantly increases a person’s chances of staying clean. While outpatient treatment options are available, these are best used as an extension of treatment after a stay at an inpatient rehabilitation facility.
While there are support groups and outpatient counseling available, these are often most effective when used as follow-up support after an inpatient addiction rehabilitation program. Rehab facilities give users a safe space to detox, talk to qualified counselors, and get clean in a location without the temptation to relapse.