Alcoholism Stages: How Do Abuse and Dependence Occur?

Sharing occasional drinks with friends and loved ones is hardly a problem, but there is the potential for this to get to the point of chronic ethanol abuse. Alcohol is a stimulant, and a feature of this class of substances is the addiction potential. This means that the process of degenerating from having occasional drinks to alcoholism is always a possibility.

To avoid this degeneration to chronic ethanol abuse, one of the important things to know is when to stop. Identifying when “occasional drinks” start to become a little more than that can be crucial to avoid becoming addicted to the substance. To identify this, one needs to be familiar with all the stages of alcoholism, so it is easier to pinpoint which stage applies to each person and how the habit can be curbed before it becomes a serious problem.

This article looks at the stages of alcoholism, reviewing the various criteria for diagnosing these stages and possible treatment options.

According to the National Institute on Alcohol Abuse and Alcoholism, about 17 million American adults have alcohol use disorders, and another 855,000 people (aged 12 to 17 years old) live with the same.

Stages of Alcoholism: Identifying The Dangers

There is some knowledge to be gleaned from the statistic as it serves as proof that alcohol use disorders are quite commonly developed from a relatively young age.

In fact, these young people can be more prone to developing an alcohol use disorder as they have not reached an age of maturity where decision-making is thorough and well-developed.

The term “alcoholism” is used a lot, but the Diagnostic and Statistical Manual of Mental Disorder-5 (DSM-5) uses a diagnostic tool that professionals in the mental health field interpret to determine the presence or absence of various mental health and substance use disorders such as alcohol use disorders.

This process is necessary because the symptoms or sequence of events that led to chronic ethanol abuse in each person are not always the same. The reaction of a person’s system to alcohol use disorder may be different from that of someone else. It is necessary to identify the level of the disorder to efficiently recommend treatment.

For this, the DSM-5 uses eleven criteria to determine the type of alcohol use disorder that a person is living with and its severity. These severity grades begin from a level where the person is experiencing two or three of the listed factors. In that case, the severity of the disorder is said to be mild. 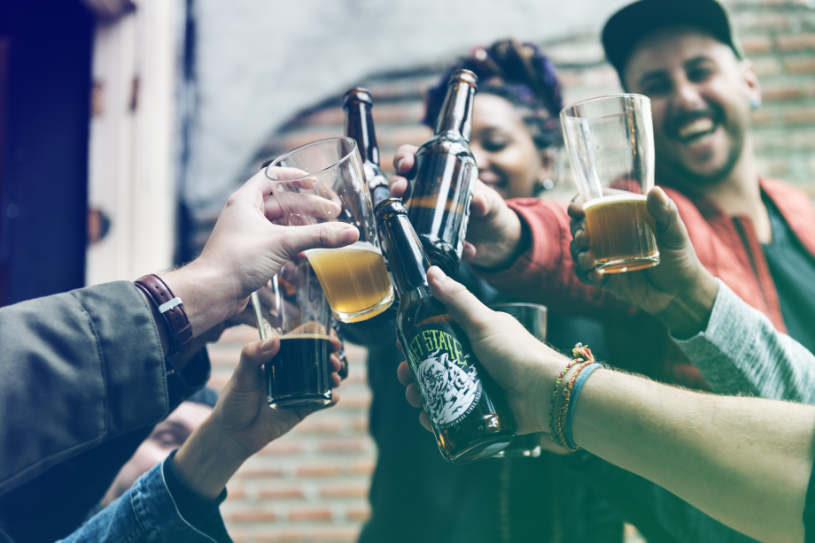 The list of eleven criteria that the DSM-5 uses to determine the stages of alcohol addiction is as follows:

On that note, what exactly are the stages of alcoholism, and how is the diagnosis for these stages presented? 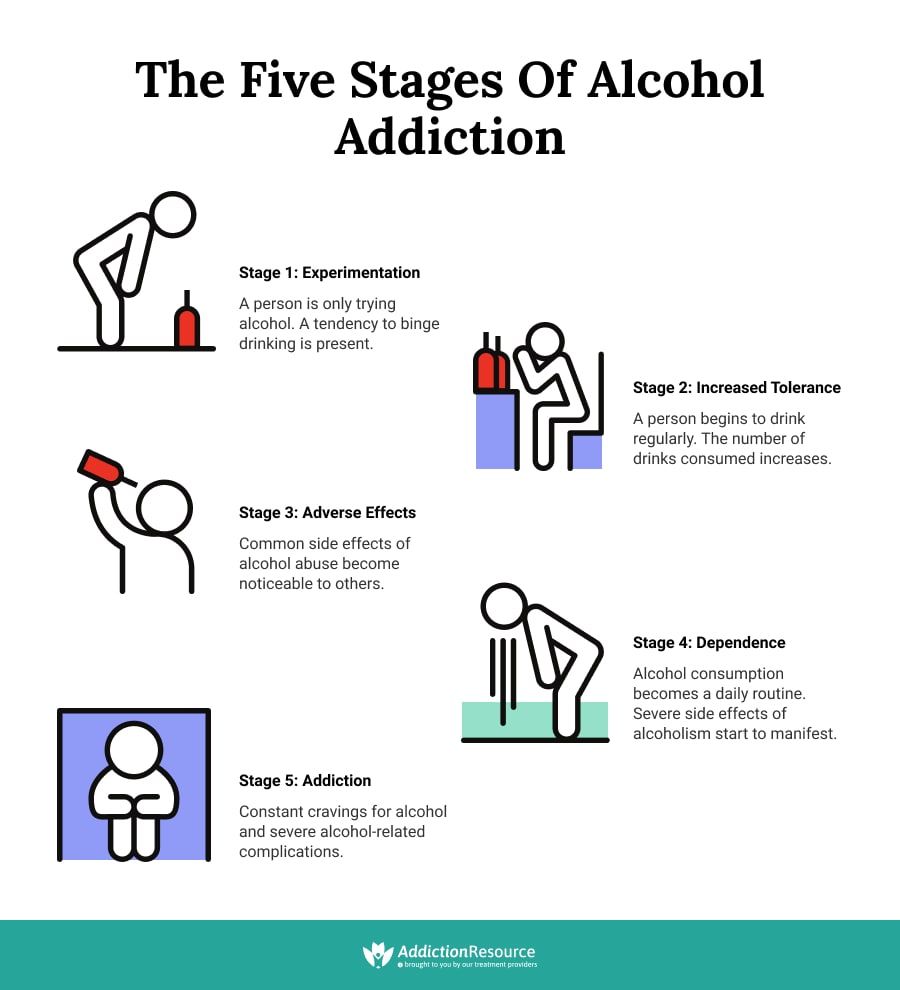 What Are The Five Stages of Alcohol Addiction?

Some sources classify these into three or four stages, but a more exhaustive classification is one with five stages of alcoholism, which are as follows:

This first stage of alcohol addiction is most often undergone at a young age, although some adults do not drink alcohol for the first time until adult age. At this stage, the person is only trying the substance out – possibly out of curiosity or due to peer pressure.

In the experimentation stage, one is more likely to binge-drink. Drinking occasionally is less likely, but when experimental drinkers do drink, they tend to have a few drinks at once. As suggested previously, it is the period of testing limits.

This is particularly true for young teenagers because, at that age, there is a lot of partying and group activities that will involve drinking. At the experimentation stage, only one or two of the DSM-5 criteria may be met, but signs of alcoholism such as vomiting, nausea, and even a coma remain because of the likelihood of binge-drinking. 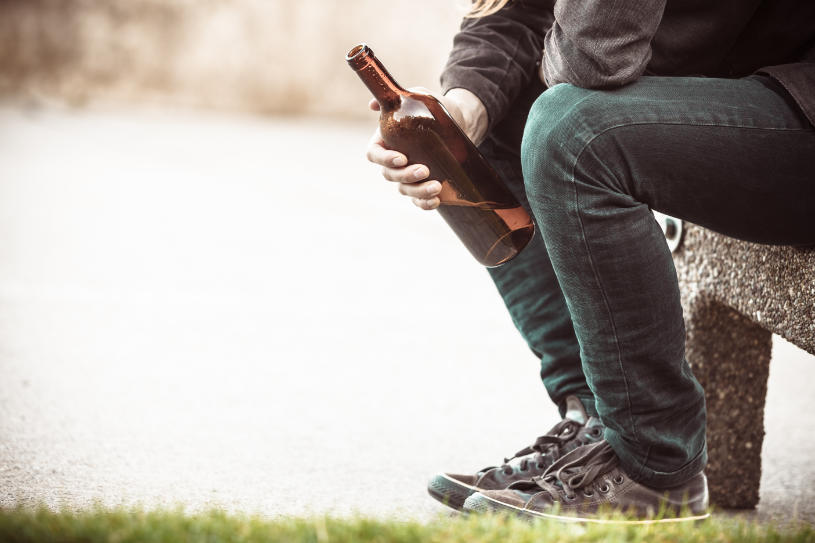 This has been mentioned already. When one begins to drink regularly, one may find that the amount of alcohol needed to achieve the desired effects rises as tolerance levels increase.

Increased tolerance levels also increase the chances that one will binge-drink, so binge-drinking symptoms can also occur at this stage of alcohol addiction. Additionally, one begins to become more dependent on alcohol here. A person at this stage is still said to be a moderate drinker and may only tick three or four of the aforementioned DSM-5 criteria.

This stage of alcohol addiction is above moderate levels but a bit below severe levels. At this stage, close friends or family may begin to notice small (or major) changes in the person’s lifestyle as the alcohol begins to take center stage. Resultant negative health effects may also become more prominent.

The person is likely to tick at least four to five criteria from the DSM-5 list, such signs of alcoholism may be experienced:

An intervention at this stage of alcohol addiction is crucial.

As the title suggests, anyone at this stage has started on the path to alcoholism. It is not yet an addiction, but it is close. At this stage of alcohol addiction, the habit of drinking has wormed its way into the daily routine, and despite being aware of the adverse effects, one does not stop drinking the substance.

As one’s tolerance levels increase and one becomes dependent on drinking, damage caused to the body also increases in severity. Additionally, any attempt to stop drinking alcohol – especially going cold turkey – may lead to withdrawal symptoms. Of the listed DSM-5 criteria, one is likely to experience at least five to six.

Dangers Associated with this Stage of Alcoholism are as Follows: 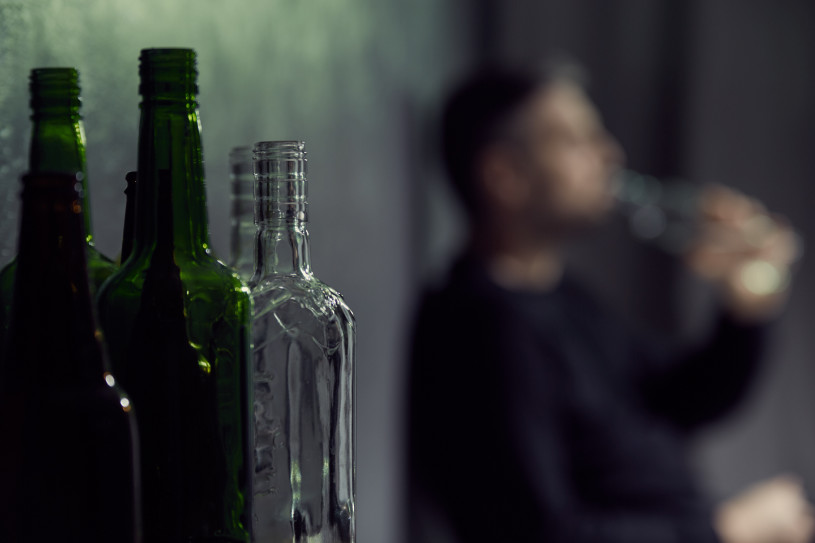 This is end-stage alcoholism. At this point, drinking is no longer for pleasure – it is a need that one can simply not do without. There are constant cravings for the substance, one finds oneself thinking about drinking at the oddest times, and there is little satisfaction in drinking in small quantities.

One of the dangers of end-stage alcoholism is that the constant cravings and feeling of dissatisfaction often leads the person to begin using other substances too. The health issues listed below are commonly associated signs of alcoholism at the addiction stage:

Of the aforementioned DSM-5 signs of alcoholism, a person at this stage of alcoholism is likely to show a minimum of six symptoms. Some people may show every single one of the symptoms of alcoholism.

Curing of alcohol use disorder is possible regardless of the stage the patient is in. The disease will more likely produce better results if tackled in its early stages.

What is the Treatment for Alcoholism?

Alcoholism does not happen overnight, and it takes a lot of oversight or deliberate lack of attention to fall victim. It is also easy to become a victim of alcohol when one is going through a difficult time in life, which is why it is important to always be on the lookout for any signs or symptoms of alcoholism in friends, family, or other loved ones. Early detection helps to avoid end-stage alcoholism, which can be life-saving.

Curing of alcohol use disorder is possible regardless of the stage the patient is in. The disease will more likely produce better results if tackled in its early stages. Carrying the label of being the most abused substance among the rehab attendees, alcohol has been studied vigorously. Hence there are plenty of readily available treatment options on the market. For more information on the suitable treatment facility, call the helpline number.

Just like there are stages of the disorder itself, their stages of quitting drinking, too. The treatment will most likely include a rehabilitation process that should be tailored to one’s particular needs. Although no one center is the same, the key elements shared throughout the facilities will remain similar whatever the stage alcoholic is experiencing. Talking to an addiction counselor or a mental health professional will be the safest option to engage in recovery stages from alcoholism.

Depending on the severity of the alcohol addiction and the length of consumption, a supervised detox might be required. It is essential that the detox process, which is a step in the recovery from alcoholism, is carried out by a professional rather than just going cold turkey,’ as this could potentially worsen the patient’s situation. Once the journey to recovery has been completed, the patient may take over a mentor’s role to help those who are taking steps to stop drinking. It will not necessarily be an easy journey, but it is highly rewarding and well worth its efforts.