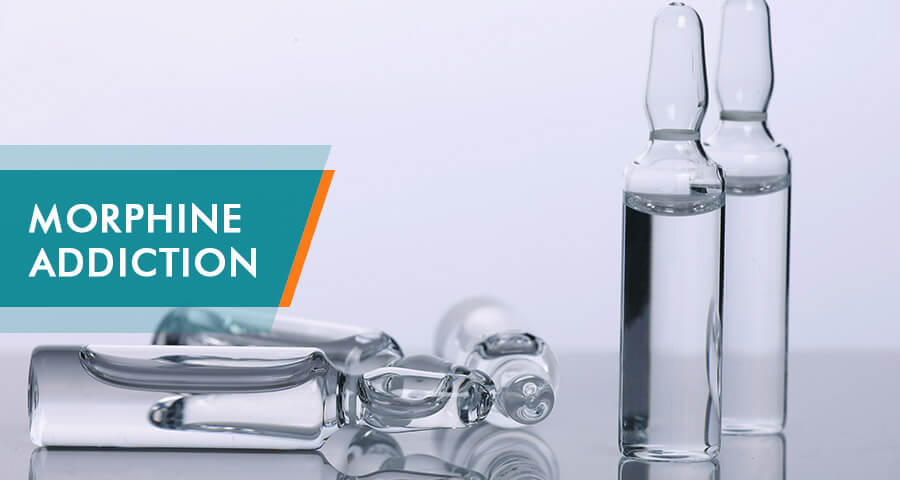 Morphine is an opiate pain medication given to patients with moderate to severe pain, often in a hospital setting. It can be taken as a pill, or in liquid or syrup form through an IV. Drug users may also snort the drug when ground into a powder.

Morphine and Its Effects

Morphine is a powerful pain medication that is given to those with severe pain. It is heavily regulated and should be given under a doctor’s supervision. It is often given to patients during or after surgery, or those with chronic or life-threatening illnesses when patients are being kept comfortable – such as those with terminal cancer. Morphine is highly addictive, and tolerance develops quickly, often before patients even realize they are addicted. Some of the most common street terms for morphine are M, Miss Emma, Monkey, and White Stuff.
Morphine is in the same class as heroin, which is a derivative of morphine that is often injected and found as a black tar substance. These drugs are opiates, and they are depressants. That means they have a depressive effect on the central nervous system, causing everything to slow down. This can lead to slowed or irregular heart rates, as well as low blood pressure. Slower than usual respiration is also a risk, and in some cases, breathing may slow so much the person dies.
When given in a typical dose, morphine may cause:

These morphine painkilling effects are beneficial to those who are suffering from chronic or severe pain, and it has its place in a hospital environment for these purposes. When abused, however, opiates addiction often comes quickly and steadily and often promptly lead to overdose.

Signs that someone has suffered from a morphine overdose include:

When morphine overdose leads to death, it is often caused by respiratory arrest or cardiac arrest. In some cases, users’ breathing will slow down so much; it stops altogether. This usually occurs after they lose consciousness. Over ½ of all overdose-related deaths are due to morphine or heroin. 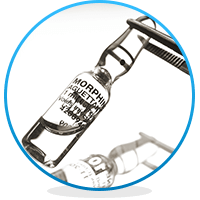 Because morphine is a powerful drug, its side effects are often noticeable more quickly than some other drugs. However, morphine is often given to patients with chronic or painful health conditions, and it can be hard to determine when someone passes from using the drug as directed, to suffering from an addiction.

What are the signs of morphine addiction?

Signs of morphine addiction include:

Tolerance to morphine often happens swiftly, with many users not realizing they are addicted until it’s already happened. Tolerance means that the drug no longer has the same effects it did in the beginning, and more of it is needed to achieve the same effects.

Those who are abusing drugs may:

If suspecting that someone may be abusing morphine, speak to them openly and with concern. Don’t make accusations, but express the worry for their safety and health. Morphine can be easily overdosed, and it is also a criminal offense, which can lead to further troubles with the law. Those who prescribed morphine and other opiates should only use the drugs as directed by their doctors.

Statistics from the Centre for Disease Control and Prevention indicate that narcotic painkillers are among the most popular prescription drugs in the US. The use of these drugs has quadrupled between 1999 and 2010. Doctors write about 300 million prescriptions for painkillers annually. The opioids found in these painkillers make them especially addictive because they enhance the effects of neurotransmitters in the brain called endorphins to suppress pain, reduce anxiety and at very significant levels induce euphoria. These painkillers now contribute to almost 3 out of 4 prescription drug overdose and about 15,500 deaths annually according to the CDC. Approximately 10 percent of all Americans have abused a drug like morphine.

These groups of individuals are at risk of becoming morphine addicts – veterans, teenagers, college students, and professionals. These people often use drugs to cope with their negative emotions, stress, and work pressures.

Anyone can become addicted to morphine. While those who are given the drug for pain may have an increased risk of becoming addicted, especially if they abuse the drug (which means using it in any way not directed by a doctor), over 60% of morphine users report getting the drug first from a friend or family member. It is hardly limited to those who actually suffer from pain.
Some individuals may be more likely to abuse drugs in the first place. These groups include:
Veterans – Post-combat veterans are more likely to suffer from a post-traumatic stress disorder. This mood disorder often causes terrifying flashbacks and nightmares, and sufferers may use drugs to help escape from their negative emotions.
Teens – Teenagers and pre-teens often use drugs to experiment with their use, out of curiosity, or to escape from negative home life.
College Students – More college students have begun using drugs in an attempt to escape from the pressures of college life. Many also use because they want to experience what it is like, and drugs are often readily available at parties, clubs, and raves – places where many college students frequent.
Professionals – Professionals are often unexpected drug users. Many engage in drug use to cope with job demands and stresses, while others may begin abusing before getting into their careers. They are known as functioning addicts because they manage to hold down and job, have families and contribute to society while still engaging in their drug use. Eventually, this lifestyle catches up to them, and overdose is all too common.

How to Treat Morphine Addiction

Withdrawal symptoms from coming off morphine are often intense, and potentially deadly. It is highly recommended that addicts who are attempting to get clean only undergo detoxification when directly supervised by a medical professional. This is best achieved in an inpatient rehabilitation facility, which generally has addiction experts, both medical and psychological, available to oversee the entire process. It is highly recommended to know about the morphine metabolism features.
By the way, it is so important to understand the price of Morphine on the street, as often, it can reflect the drugs purity and what one is putting into their body.

Yes, morphine addiction treatment is effective if conducted correctly. Undertaking a rehab program under the supervision of medical professionals is recommended. There are some addiction treatment programs. The treatment is best carried out in an inpatient drug rehabilitation facility, where medical and psychological support can be provided to the patient.
Once detox is complete, patients are given intensive counseling to help them overcome whatever underlying traumas or issues led to the drug abuse in the first place. Ongoing therapy and post-rehab care are also offered