Addiction Resource » Drugs of Abuse » Morphine » How Long Does Morphine Stay In Your System?

How Long Does Morphine Stay in Your System? Half-Life of Morphine

Morphine is an opioid analgesic commonly prescribed for the treatment of moderate and severe pain. Despite having a high potential for addiction and carrying serious health effects, it is widely abused. It is still among the leading causes of drug-related medical emergency room admissions requiring urgent treatment. Once introduced into the body, it will stay in the body for around 12 hours. Morphine half-life and morphine metabolism are important things to know when preparing for a drug test.

How Long Can Morphine Be Detected in Urine, Blood, Hair, And Saliva?

After its introduction into the body, MSContin will accumulate into different tissues and persist for varying durations of time depending on dose, length of use, and a variety of other factors. The commonest places to detect it will be blood, urine, saliva, and hair.

How Long Does Morphine Stay in Your Urine?

The detection time of the drug in urine can be up to 3 days. If the individual’s morphine metabolism rate is low, it may stay for three days. On the other hand, if one is a frequent user, the detection time can be 5 to 6 days.

How Long Does It Stay in Your Blood?

It will be detectable in blood for up to 15 hours after introduction into the system. Longer detection times can be seen in individuals who have compromised kidney functions or very heavy users.

How Long Does It Stay in Your Hair?

The opioid drug has the longest detection window in a hair test. It can last for 80 to 90 days. As the drug’s effects appear on the scalp after 5 to 10 days of consumption, the hair samples are taken after 5 to 10 days of drug ingestion. This drug test is quite costly, and the testing procedure itself is complicated. Therefore, health professionals or court officials will not use this test for detecting the painkiller in the body. Scientists may use this test, but for research only.

How Long Does It Stay in Your Saliva?

Saliva drug tests are uncommon when testing for the opioid. According to research, morphine can be detected in the saliva for 3 days after use.

Studies have shown that there is no correlation between levels of morphine in saliva and that in the system. Salivary levels can therefore not be used to quantify plasma levels of the drug. 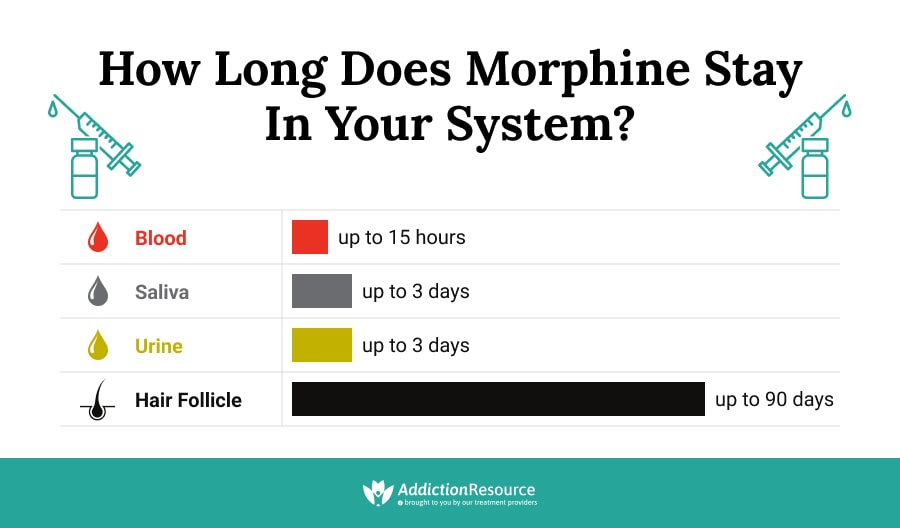 What Does Morphine Do?

Being a naturally occurring opioid analgesic used in medical establishments for pain treatment, morphine mechanism of action is mainly binding to the MOP receptors found in both central and peripheral nervous systems. This results in stimulation and activation of descending inhibitory pathways. Consequently, fewer pain stimuli signals are blocked from reaching the central nervous system leading to opioid-induced analgesia (pain treatment). The half-life of morphine is around 2-3 hours. Same as alcohol, the use of morphine will cause CNS depression.

How Long Does Morphine Last?

The time it takes for the morphine mechanism of action to kick in will depend on the dose and form of the drug used.

The length of time for which the effects of morphine will be experienced depends on the formulation used. For the extended-release painkiller, the effects will last in the system for 12-24 hours, while with the immediate release formulations, effects last anywhere between 4 – 6 hours.

How Long Does Morphine Stay in Your System?

Morphine is the most common form of analgesic opiate present in opium used for the medical treatment of moderate to severe pain. However, some people do not use it for medical purposes, and rather they use it for recreation. It has a high potential for addiction requiring treatment with the help of qualified medical personnel or addiction experts. Its physical addiction can lead to repeated drug abuse. Health professionals often use it for pain management in people with terminal cancer. Once a person ingests the drug, it readily enters the bloodstream and moves to the brain, hence activating the opioid receptors for exerting the medication’s effects. 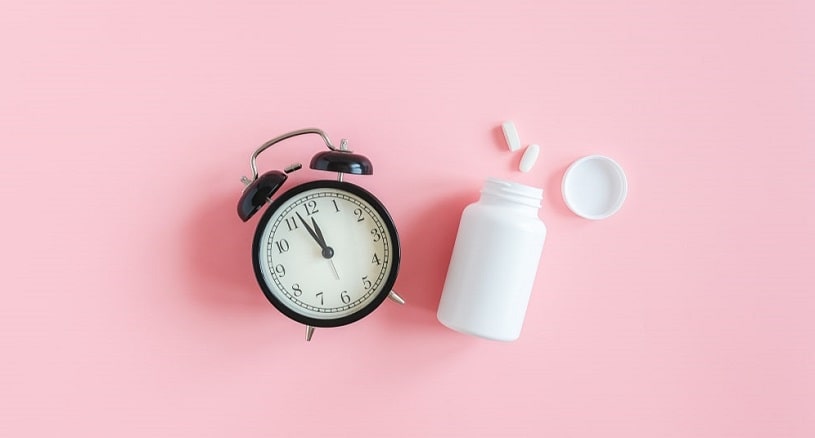 The painkiller has different time ranges for effectiveness and presence in the human body. Generally, the half-life of morphine is between 2 to 3 hours and exits the body pretty quickly. However, certain factors can impact morphine half-life in the body.

Dose of the Drug

The medication is available in different varieties. One can find it in the purest form, and other modified forms like Roxanol, MSContin, Avinza, Dover’s Powder, Laudanum, etc. Many ask, “If I take a smaller dosage, how long does it stay in my system, then? The dosage can dictate how long the drug stays in a system, i.e., the higher the dosage, the longer it will stay in the body system and vice versa.

Not all screening tests provide the same results. Some tests can detect the drug in people for up to 3 months, while others only detect it for a few hours.

Physical factors influence how fast a body will excrete the opioid drug out of its system.

So, as each human being has different anatomy, the results may differ. Also, the detection window can be different depending on the type of drug test.

How To Get It Out Of The System Fast?

Note that the only way to be clear of any drug is to stop the consumption. If one wishes to push the drug and its remains out of the system fast, the following can help:

However, the only effective way to remove Morphine from the body is to stop consuming the medication. The more one consumes, the longer it will stay in the body and the more of a health hazard it will be.

MSContin depresses the respiratory system and slows down the heart rate. If dangerous interactions happen, it can lead to morphine overdose. This effect can occur with other drugs like barbiturates, alcohol, and other CNS depressants.

Don’t drink alcohol or use any drugs containing alcohol when taking Morphine. If a person has a history of respiratory troubles, they should avoid the medication in the first place, let alone a combination with alcohol .

Addiction is pretty common, and treatment is no walk in the park. The usual pathway to addiction begins with the individual requiring higher doses to achieve the same effect – a scenario referred to as tolerance. If the user fails to use this drug, they will experience morphine withdrawal symptoms such as a strong craving for the drug, anxiety, and depression, among other symptoms. The treatment takes a multifaceted approach. Once individuals have made up their minds to stop using, it’s a good idea to involve health experts who will help take care of the withdrawal symptoms while the drug exits the system slowly. Your doctor might even prescribe other drugs that work in a similar way to the opioid. These drugs produce comparatively less addiction and serve to dull down the cravings.

Addiction treatment help is necessary to make sure the withdrawal symptoms don’t cause any health risks.