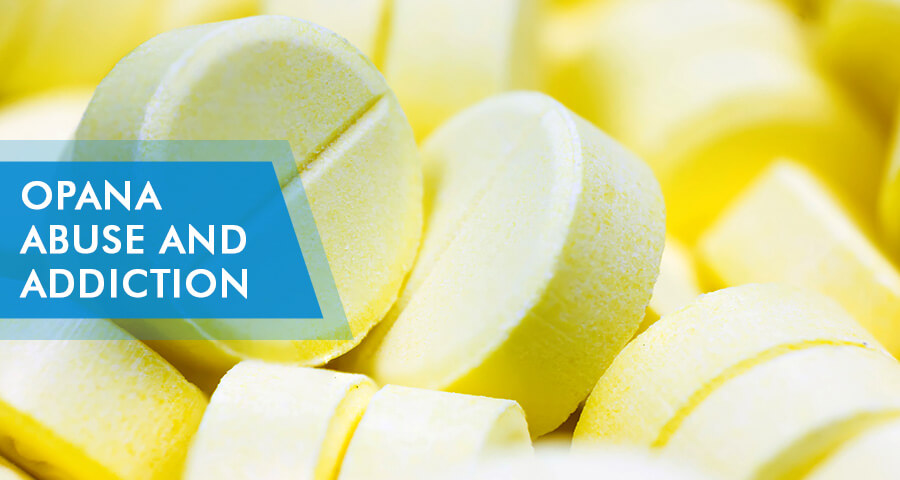 Opana is an opioid pain medication which they define, legally as a scheduled narcotic. They use it to treat moderate to severe pain during childbirth or after surgery.

What is a drug? Opana is the brand name for an oxymorphone formula, similar in effects to morphine. The drug became available for purchase in the US in 2006 and people report it to be twice as potent as OxyContin. It is a popular drug among opioid abusers. In fact, the DEA classifies this drug as a Schedule II controlled substance. It comes in both immediate- and extended-release tablets (Opana-ER and Opana respectively).
The drug has a relatively long half-life of 8 hours, compared to morphine which has a half-life as short as 1.5 hours.

What are the Street Names of Opana?

Sometimes, people refer to Opana by its slang names, which include:

It is a potent prescription drug, often used by people to get high. A patient with a personal of family history of substance abuse or addiction is more likely to become heavily dependent on Opana.
When one takes opioid drugs such as this drug on a regular basis, it may cause the user to form a tolerance towards the drug. As a result, it leads to the user having to take more tablets, or a higher dose of Opana to keep on getting the same effect. This isn’t only the case for legitimate medical use. However, it is also for those taking Opana recreationally. This is why Opana dependence doesn’t only occur with recreational users, but also with users who use it for an extended period.
What happens is that the brain gets used to the presence of the drug in the bloodstream. Opana increases the dopamine levels in the brain. This bypasses the brain’s natural reward pathways. Therefore, it creates a shortcut to pleasure and reward.

How is Opana Misused?

People can misuse Opana in various ways, through snorting, injecting or even smoking it. When one crushes the drug, it bypasses the extended release format. This delivers the entire dose into a person’s bloodstream at once. As a result, this method increases the user’s level of dependency more rapidly.

The Effects of Opana

The specific effects of Opana can include:

Opana and Other Medication

Opana can induce or worsen convulsions. Certain stomach suppressors can increase Opana’s ability to suppress respiration. Using this drug with sleeping pills or tranquilizers could also suppress heart function. Consequently, it can induce cardiac arrest and the results may be fatal.

Withdrawal symptoms of it may be physical as well as psychological. Drug withdrawal typically begins within 14 to 18 hours after taking the last dose. According to the FDA drug report, symptoms of Opana withdrawal include:

How Long Does Opana Withdrawal Last?

Opana in the News

In an FDA report from March 2017, they made an announcement. It stated that the dangers of the drug outweigh the benefits of the opioid painkiller. It also stated that they reformulated Opana in 2012 with the goal to reduce abuse via snorting. As a result, it will make it harder to crush. Crushing the tablets negate the effects of the time release formula. This leads to higher blood serum levels. Unfortunately, it didn’t take long for drug abusers to figure out that the new formulation is relatively easy to dissolve. As a result, users could then inject it. They linked this occurrence to an HIV outbreak in Indiana during 2015, as drug abusers were sharing needles. They have also connected injecting Opana with a rare but serious blood disorder. This is thrombotic thrombocytopenic purpura.
Opana addiction has led to an increase in pharmacy thefts since the reformulation of OxyContin in 2010. Narconon.org reports that 33 deaths occurred in Louisville, Kentucky in 2011. This was due to drug overdose. The other major problem associated with drug addiction is the fact that many users eventually turn to heroin to prevent withdrawal symptoms.
Consuming Opana with food can lead to an increase in blood serum levels up to 50%. Furthermore, consuming it with alcohol can increase blood serum levels by up to 270%. For this reason, it’s advisable to ingest the tablets an hour to an hour and a half before meals and to avoid alcohol.

Signs and Symptoms of Opana Abuse

Opana is an opioid, so the signs and symptoms of Opana abuse are similar to those of other opiates such as heroin. These can include:

Let’s presume someone knows that a loved one is using this drug. There are a few signs that an individual could use to see if he or she might have a problem with Opana abuse:

What Happens When a Person Loses Control Over Their Opana Use?

The only effective solution to deal with an Opana addiction is to get the person into a rehabilitation program as soon as possible. Rehabilitation from this drug will typically last between eight and ten weeks.
Unfortunately, drug addiction doesn’t only affect the user physically. However, it also leaves them with relationships to repair and self-respect to regain. They should learn new life skills, which will replace the harmful ones.

The first step towards rehabilitation from Opana abuse is undergoing a detox. This happens under medical supervision with the intention of helping the patient control different conditions. These are the cravings, emotional distress and possible medical complications when the toxins are exiting the body.
In most cases, one can treat drug withdrawal with other medication. This is because they often consider medical detox the optimal method for dealing with addiction. The reason is that it should ease opioid withdrawal. This should only happen in a specialized facility where the professional healthcare staff can monitor withdrawal symptoms. They may also prescribe some medications, if necessary.
Substitution medications are opioid agonists which they designed to keep withdrawal symptoms under control. These are usually buprenorphine products or methadone. Both are long-acting opioids, with fewer doses needed less often. At the same time, these medications fill the same opioid receptors that this drug used to. Methadone is a full agonist while buprenorphine is a partial opioid agonist. Even though these medications work on the same opioid receptors, it is not to the same degree as the drug. Therefore, it won’t create the same high effects as it would.
Buprenorphine products used for detox contains the opioid antagonist naloxone. It remains dormant until the user attempts to abuse the drug, and then precipitates withdrawal. This is why they can also use buprenorphine combination medications later during treatment.
Adjunct medications can manage specific drug withdrawal symptoms such as a sleep aid. This way, it will help with insomnia or anti-nausea medication. Medical practitioners may prescribe antidepressants to help with the imbalance in the chemicals in the brain which the Opana abuse caused in the first place.
After the detox, addiction treatment can begin in either an inpatient or outpatient facility. Of course, it depends on the outcome of a thorough counseling session. After, they will determine which of treatment facilities would work better for the patient in question.

On a typical day in rehab, activities may include: