Adderall belongs to a class of amphetamines, which are psychostimulants that excite the central nervous system. Adderall uses include being prescribed to treat ADHD disorder and narcolepsy because this medication improves alertness and concentration. Is this medication addictive, and what does it look like? Who is at risk of developing Adderall addiction and how severe are its withdrawal symptoms? Read along further to find out.

The drug is considered a long-acting stimulant and has various neurocognitive, autonomic, and mood effects, as shown in the NCBI study. It has a high abuse potential for dependence, making it one of the most difficult drugs to quit. In 2017 alone, this medicine was the 27th most commonly prescribed medicine in the United States, with its total prescriptions exceeding 24 millions. 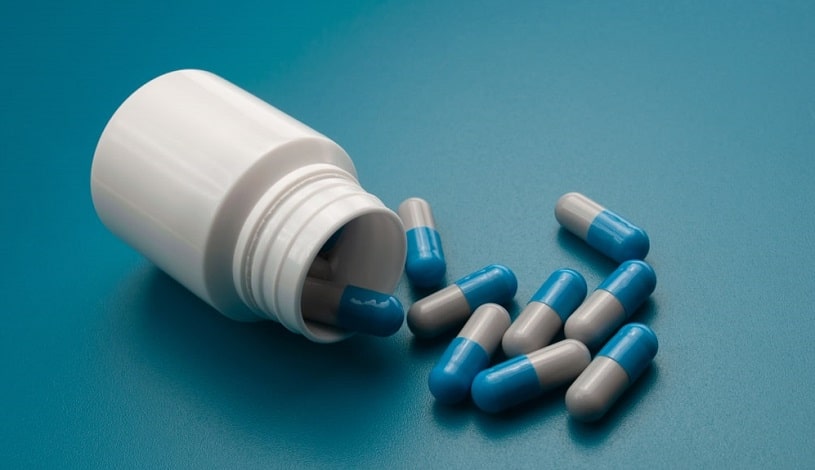 Is Adderall a narcotic?

In medicinal terms, narcotics are drugs that are prescribed for the relief of pain. From this point of view, Adderall is not considered a narcotic due to it being a treatment for narcolepsy and ADHD disorder, rather than pain relief. Sometimes the substance is also used as one of the many drug detox medications, replacing a similar stimulant a patient may be addicted to, such as cocaine.

From a medical point of view, it is not a narcotic but rather a stimulant, which increases blood pressure and heart rate, boosts energy, enhances alertness, and helps maintain wakefulness.

Although, due to the Adderall drug schedule class, the medication is considered legally as a narcotic. According to the US Food and Drug Administration, this medicine is considered a class II substance. It means that this drug is highly restricted in terms of access, and it can be obtained legally under prescription only.

History of The Medicine

Although amphetamines emerged in the world as early as 1929, it was not until 1995 that Adderall was created by combining different amphetamine salts. At that time, it was considered the preferred drug to be used for ADHD. Adderall uses for ADHD disorder skyrocketed in the 1990s, as did legal complications and lawsuits. In 2000, the FDA issued a warning to the manufacturers of the medicine for false advertising, which had become a leading cause for recreational use of the drug.

By 2015, according to Monitoring the Future survey sponsored by the National Institute on Drug Abuse, amphetamines were the most abused prescription drugs by high school students. It became increasingly common for students or professionals to pop an illegally obtained prescription stimulant to deal with academic and work pressures.

This medicine’s chemical structure consists of amphetamine and dextroamphetamine mixed salts. Adderall prescription drugs come in the form of tablets and capsules, which can be of different shapes and colors according to their strengths. 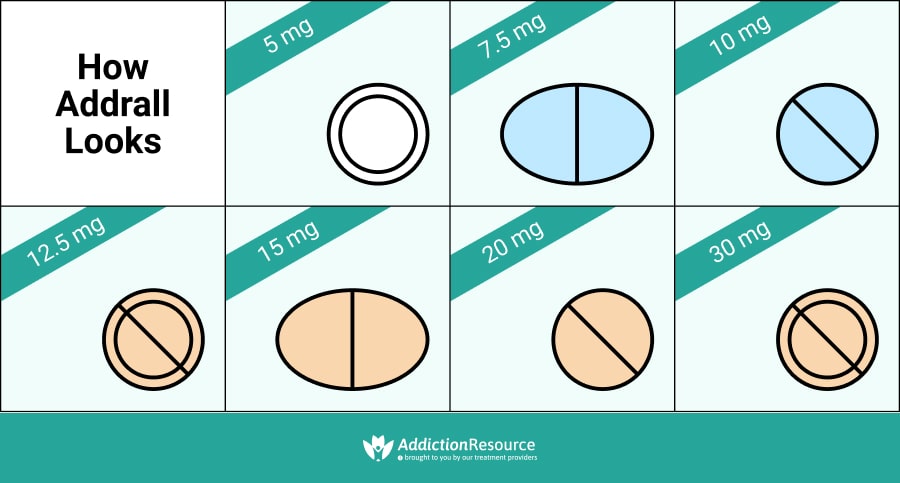 These are Described Below:
Capsules come in the following strengths in blue, yellow, and orange colors:

The 5mg strength tablet comes as a white Adderall pill that is round and flat. Other tablets are as follows:

What is the Difference between Adderall XR vs IR?

Both formulations of the medication contain the same active ingredients, dextroamphetamine, and levoamphetamine in a ratio of 3:1. However, the XR version of the drug, which was introduced by Shire Pharmaceuticals in 2001, is a longer-acting formulation that provides prolonged relief of symptoms for up to 12 hours. In contrast, the immediate release IR format is shorter acting, and its effects only last 4-6 hours, which means the patient needs to take it 2-3 times every day. This complicates treatment, especially in children with ADHD who require supervision by a parent or school nurse for medication administration. XR capsules are more expensive than Adderall IR tablets, but there is no significant difference in efficacy, side effects, or potential for dependence.

Does This Medicine Expire?

The medication can maintain its potency for years after the expiry date and is safe to take for the most part, although the effectiveness may decrease over time.

Is Addiction To Adderall Possible?

Adderall is a combination of amphetamine and dextroamphetamine: a potent stimulant that increases the levels of dopamine, norepinephrine, and serotonin in the human brain – three key neurotransmitters associated with feelings of pleasure, motivation, and attentiveness. They improve concentration and control sleep and appetite. In the United States, the Adderall pill is a controlled substance. It is in the same category as cocaine, methadone, and OxyContin. Drugs in this category carry a high risk of physical and psychological dependence. For this reason, this medicine can only be legally obtained with a physician’s prescription, and repeat-prescriptions must be arranged directly between the doctor’s practice and pharmacy. 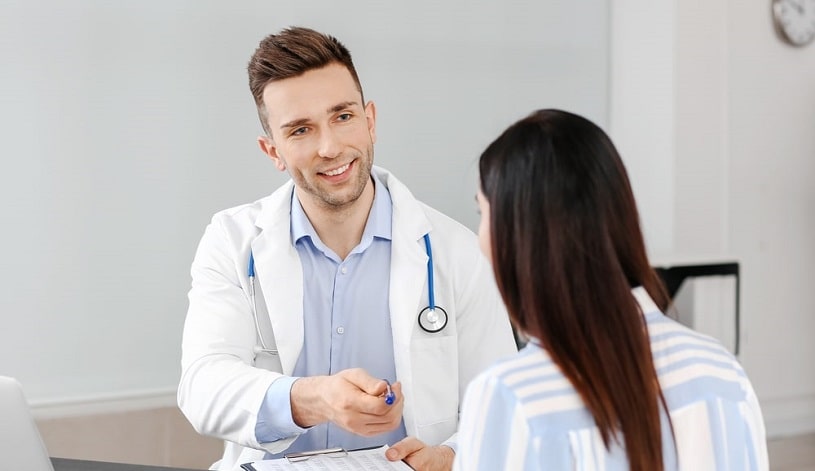 If addiction does develop, stopping Adderall prescription and functioning without it can become a day-to-day challenge. Dependency can often go unnoticed by those in contact with a person using it (especially in the early stages) because a seemingly driven and ambitious person is not necessarily associated with someone who has a drug dependence. Conversely, often the user themselves will be unaware of their dependency. However, possible early-signs and symptoms of addiction could be noted if one knows what to look at.

It’s important to be aware of Adderall drug interactions, i.e., medications such as MAOIs (a type of antidepressants) and others that interact with amphetamines and may cause problems.

Signs of Addiction To Adderall

It can be difficult to recognize Adderall abuse symptoms because users do not usually resemble the stereotypical ‘drug user’. Often, individuals with an amphetamine addiction are young professionals, high achievers, and students who use the medication to enhance focus and concentration. The easiest way to recognize an addict is to request an Adderall urine test. However, this is not always possible as the person can reject to pass one. So, what are the signs someone is abusing this medication?

There are certain tell-tale signs and symptoms of Adderall addiction. These can further be divided into physical and behavioral symptoms.

The physical symptoms of Adderall addiction can include the following:

Some of the more serious signs of its abuse include:

There are some behavioral symptoms associated with the abuse of amphetamines: 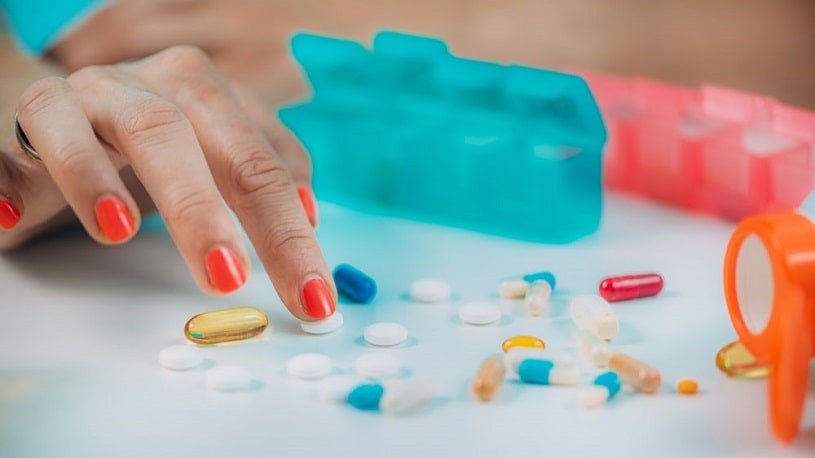 If someone has a prescription for this medication, they can still develop a dependence on the medicine by:

This medicine is mostly abused by people who require higher levels of focus and concentration, such as college students and the working class. Athletes and individuals with eating disorders are also at risk of abuse. These are further described below:

According to SAMHSA, each year, about 137,000 full-time college students abuse prescription stimulants (an average of 400 new users per day). During ‘finals week’ (end-of-year exams), the price of a 30 mg tablet on the street market can go up to as much as $10 per pill. In addition, some people abuse it for anxiety because it enhances sociability, confidence, and energy levels.

The Bloomberg School of Public Health 2016 research, which carried out a survey on how many college students take this medication for studying purposes, revealed that 60% of users are aged 18-25-years old, which accounts for 10.7% in 2013. Non-college students accounted for 6.8%. 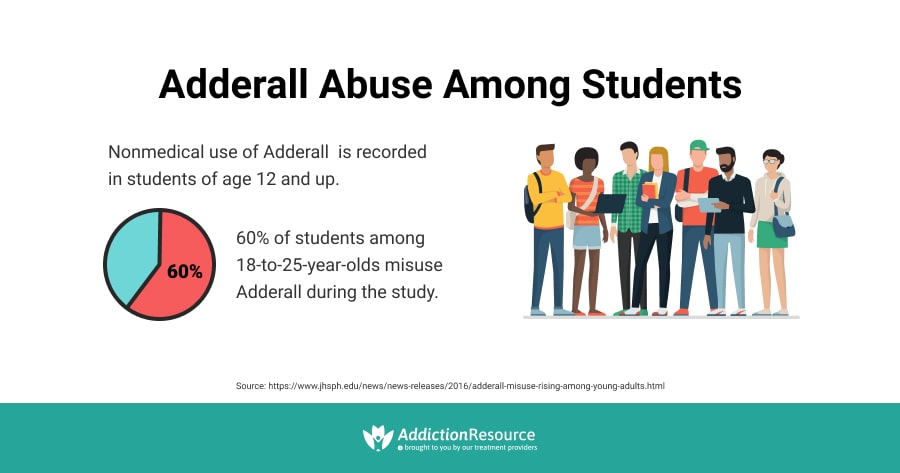 Just like college students, working professionals also abuse this drug to gain a competitive advantage or under peer pressure. According to the Quest Diagnostics Drug Testing Index, the use of amphetamines such as this medicine doubled in the years 2013 to 2018.

Athletes also pose a high risk of developing an addiction to this medication to enhance their performance and fight tiredness and fatigue. Several athletes test positive during drug testing, which results in their suspension. 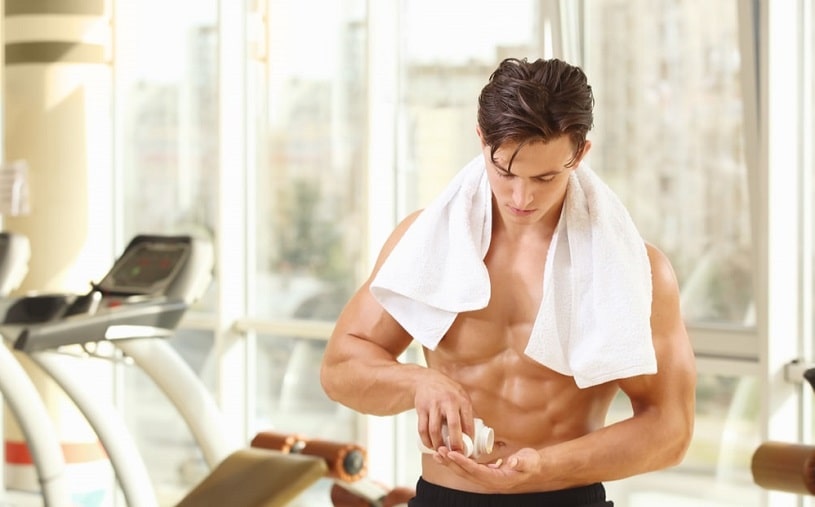 One of the side effects of Adderall is that it suppresses appetite, which may cause individuals with eating disorders to abuse it. This, in turn, can lead them to become addicted to it. For example, when comparing  Adderall vs Vyvanse they are formed from different amphetamine derivatives, and differ in structure. Vyvanse is also an approved treatment for binge eating disorder, but Adderall use for weight loss is not approved by FDA.

How to Help a Person with Symptoms of Adderall Addiction?

Helping someone with symptoms of dependence on stimulant medications requires an understanding and non-judgmental mindset. The first signs a person might be regularly using this medication are changes in behavior, such as becoming increasingly paranoid, violent, or secretive. The user might also be experiencing racing thoughts, insomnia, extreme mood swings, and maybe even severe depression whilst trying to keep up academic or work performance.

It’s a good idea to involve a professional therapist in any confrontation or intervention with a loved one. Professionals are trained to bring up the subject gently. They know the best language to use without sounding accusatory or judgmental. They can also guide family and friends on how to cope with the stress of living with an addict.

People with signs of Adderall addiction are often high achievers and driven to do well academically or professionally. They begin misusing these medications to improve focus and performance. When approaching someone who shows signs and symptoms of addiction, it’s important to express support and understanding and listen to their fears and reservations about coping with life without the medicine.

Here are Some Tips to Help a Person with Signs of Addiction:

I Think I’m Addicted to Adderall – What Should I Do?

Treating alcohol and drug addiction is a complicated process and must be done under the supervision of healthcare professionals. Quitting the medicine cold turkey is not a good idea. Withdrawal from the medication requires a slow taper to ensure it is safe and comfortable. The symptoms of withdrawal can be rough, and detox should be performed under the supervision of medical professionals.

Detoxification at one of the best drug rehab centers can ensure that withdrawal from the drug is as safe and as comfortable as possible.

A number of outpatient and inpatient rehabilitation facilities offer various aftercare programs for people with a recent addiction to the medicine. 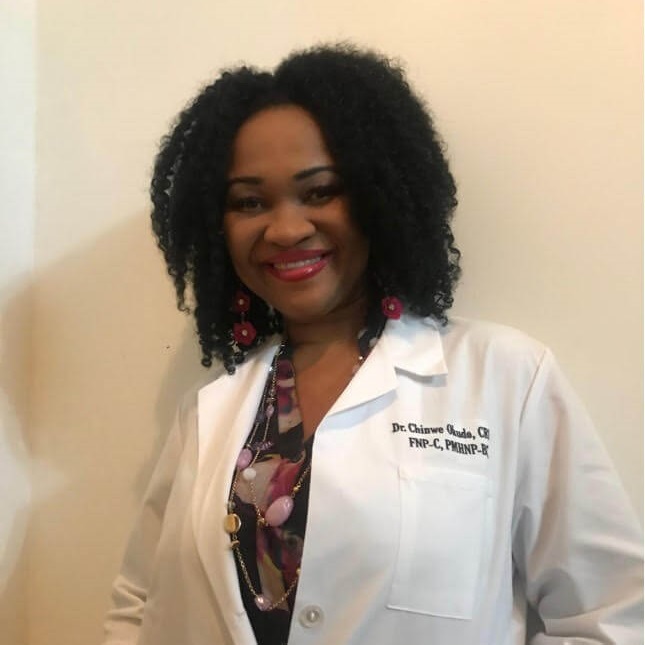 Dr. Chinwe Okudo is a graduate of Loyola University New-Orleans, where she was trained as a Family Nurse Practitioner- primary care with emphasis on behavioral Health, (Bachelors-doctorate program track. Eventually Post-Doctoral certification from Brandman University focus on Psychiatric mental health. and is now currently Dual Board certified as a family Nurse Practitioner and a Psychiatric Mental health Nurse practitioner.