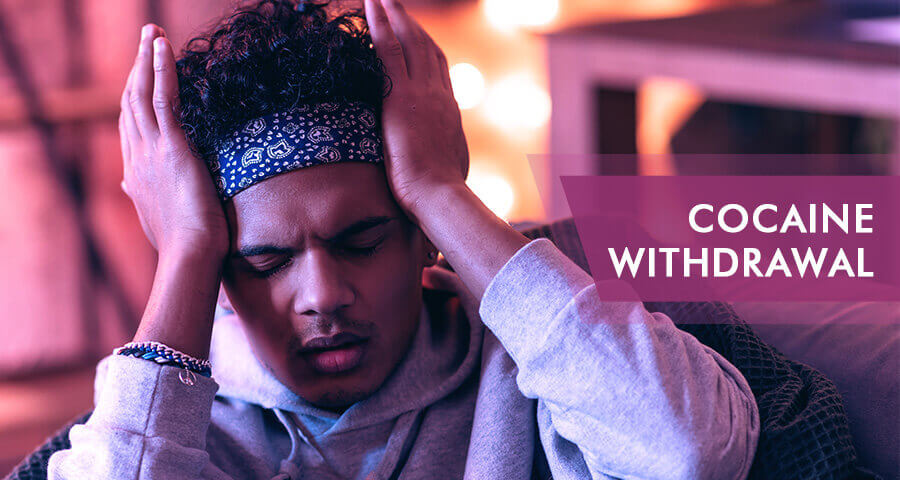 A complex concoction of genetic and environmental factors can trigger cocaine use. The first smoke may be provoked by stress or being brought up in an environment where there is a rampant abuse of the drug.
It doesn’t help matters either that some individuals are genetically prone to addiction. Cocaine also acts on the brain in peculiar ways to create tolerance and dependence that make it difficult for the individual to quit his habit even if he intends to. And then there are the withdrawal symptoms! It is vital to know what does cocaine do to one’s body.
The withdrawal symptoms of cocaine range from the unpleasant and inconvenient to the terrifying, morbid, and life-threatening. It is the desire to avoid these symptoms and get a grip on their sanity that makes people seek refuge in cocaine once more. The result is a relapse. While there are therapies to combat the symptoms of cocaine withdrawal, awareness helps one be prepared that in turn, empowers him to battle his addiction and prevent cocaine from taking over his life once more.

Why To Learn About Cocaine Withdrawal?

According to the National Survey on Drug Use and Health (NSDUH), the use of cocaine in the U.S. has remained stable since 2009.
The National Youth Risk Behavior Survey is carried out amongst 9th through 12th-grade students in public and private school students across the country during the spring semester every two years. According to this report, the incidence of cocaine use amongst this population has decreased to 5.5 percent in 2013 from 6.8 percent in 2011.
These statistics are indeed encouraging. But on the other hand, there are also numbers that provide a reality check and remind that the war against cocaine is not yet over.
According to the NSDUH, the incidence of cocaine use amongst adults aged between 18 and 25 years is the highest amongst all groups. This is the time when they define their purpose and goals in life, search for meaningful vocations, choose careers, and nurture dreams of owning their first homes and raising happy families.
The NSDUH report also mentions that there are still 913,000 Americans whom the Diagnostic and Statistical Manual of Mental Disorders guidelines classify as being dependent on cocaine or who abuse the drug.
Knowledge is power in the battle to beat these numbers. It is still assuring to know that cocaine withdrawal symptoms afflict almost every user who is trying to quit and inspiring to learn that even hard addicts and long-term users can overcome the symptoms and reclaim their lives.

How many deaths are related to cocaine overdose?

Cocaine overdose deaths in the U.S. increased by 42% during the period between 2001 and 2014, according to a report by the National Institute on Drug Abuse (NIDA). The likelihood of a cocaine overdose is directly linked to the abuser’s tolerance level.

How Soon Do Cocaine Withdrawals Manifest?

Cocaine is a powerful stimulant that acts on the brain very soon after taking it. What does cocaine feel like? It floods the brain with dopamine that produces a “rush” of euphoria and makes users mentally and physically energetic. However, this high is short-lived and is almost immediately followed by a “crash” because the cocaine is eliminated from the body rapidly. This is the onset of the first of the many cocaine withdrawal symptoms that subsequently follow.
Some cocaine withdrawal symptoms can last for several months after stopping use altogether. However, this is more common among people who once abused the drug heavily and often took it every day. As scientists have pointed out, the severity of the cocaine withdrawal symptoms is generally directly proportional to the frequency of use of the drug and the severity of addiction.

What Are The Symptoms Of Cocaine Withdrawal?

What Are The Stages Of Cocaine Withdrawal?

Because cocaine withdrawal symptoms tend to manifest over an extended time period of several months, many researchers divide the process into three distinct phases. Before delving into their details, it is important to note that these stages may set in early or late, overlap, or manifest in varying degrees depending on the severity of addiction, the way in which the individual’s body metabolizes the drug, and his peculiar genetic makeup that may predispose him to certain psychiatric disorders.

What Is The First Phase of Cocaine Withdrawal?

The first phase is the crash stage that manifests almost immediately after the last dose of taking cocaine. The symptoms include extreme fatigue and drowsiness, anxiety, irritability, increased appetite, and intense lack of pleasure. Users may also develop depressive tendencies that are caused by a severe drop in the levels of serotonin and norepinephrine, the mood regulators in the brain. Some patients may also exhibit symptoms like paranoia.
Cocaine withdrawal-related anxiety tends to manifest more intensely in women than men. Scientists believe that the female sex hormone estrogen has a role to play in magnifying anxiety. The feelings of restlessness, nervousness, and panic are so acute that these might even trigger a relapse.
Scientists have also discovered that early in the abstinence period, the cocaine user tends to exhibit impaired cognitive skills. It was found in a study that users in the early phase of withdrawal faltered on cognitive flexibility tasks and had impaired verbal fluency and verbal memory.
Contrary to popular notion, cocaine withdrawal symptoms can occur even when the user has traces of cocaine in his body. He need not be entirely off cocaine for the first phase of withdrawal symptoms to manifest.

What Is The Second Phase of Cocaine Withdrawals?

The lethargy manifested during the “crash” phase can continue for up to 10 weeks, which is well into the second phase of cocaine withdrawal. This phase is characterized by irritability, lack of concentration, depression, vivid unpleasant dreams, and erratic sleep patterns that compound fatigue. This withdrawal phase may begin a week after taking the last dose of cocaine and last for up to 10 weeks.
A dangerous symptom during this phase is the development of an intense craving for cocaine. The craving coupled with the unpleasantness of the symptoms drive many towards a relapse.
The risk of overdosing oneself is also high during this period. After a chronic period of abuse, cocaine users usually develop tolerance towards the drug. They need more of it than earlier to experience the high they once experienced. This increases the chance of an overdose. According to a report by the National Institute on Drug Abuse (NIDA), the number of cocaine overdose deaths in the U.S. has increased markedly by 42 percent during the period from 2001 to 2014.

What Is The Third Phase of Cocaine Withdrawal?

The third phase of cocaine withdrawal is known as “extinction.” It is marked by a profound sense of dissatisfaction with life (dysphoria), a feeling of uneasiness, and episodic cravings for cocaine. This stage may last for up to 28 weeks after taking the last dose of cocaine.
It is interesting to note that withdrawal symptoms like dysphoria, erratic sleep pattern (insomnia/hypersomnia), psychomotor agitation (inability to control physical movements), and vivid and unpleasant dreams tend to manifest more in cocaine users who have a history of depression.
There are no intense physical symptoms of cocaine withdrawal.
Heroin or oxycodone withdrawal periods are marked by symptoms like muscle aches, spasm, severe stomach cramp, diarrhea, vomiting, nausea, and dizziness that are hard to miss. On the other hand, cocaine withdrawal symptoms are mostly emotional and psychological, which makes them more dangerous. There is a tendency for family members, co-workers, teachers, and/or neighbors to miss the signs and not seek help for their loved ones. Yet some symptoms like depression and dysphoria, if not managed, can trigger a relapse or worse, drive cocaine users to commit suicide.

How Long Does Cocaine Stay in the Body Without Detox?

Are Crack Withdrawal Symptoms the Same?

According to the University of Maryland Center for Substance Abuse Research (CESAR), crack is significantly more powerful and addictive than cocaine. It is the most potent form of cocaine and also the riskiest. Tolerance to and dependence on crack develop very quickly and abuse turns to addiction faster.
Crack cocaine profoundly impacts the brain’s reward and punishment system. So crack cocaine withdrawal symptoms set in quickly after the last dose. The symptoms are similar to what cocaine users usually experience during the abstinence period. But in the case of crack cocaine withdrawal, the symptoms may be more severe. According to CESAR, depending on the severity of the addiction, some users may also develop psychosis, a condition that is characterized by feelings of suspicion, paranoia, and hostile behavioral tendencies. By the way, the beginning of withdrawals depends on how long does cocaine stay in one’s system.
Like cocaine, crack cocaine withdrawal symptoms also manifest in multiple phases.
The first phase, the acute withdrawal period, follows almost immediately after stopping the drug. Sometimes, the onset is as fast as an hour. The second phase of post-acute withdrawal symptoms (PAWS) may set in weeks and even months after quitting crack cocaine. This phase is characterized by severe psychiatric and emotional symptoms that set in with much more intensity than what cocaine users generally experience during abstinence.

What Is The Outcome of Cocaine Withdrawal Treatment?

Scientists believe that the severity of crack cocaine withdrawal symptoms can predict the outcome of treatment and rehabilitation efforts. Those who are admitted to treatment and rehab clinics with severe withdrawal symptoms are most likely to discontinue treatment. They are less likely to abstain from cocaine for very long and have the greatest chance of relapse compared to users who exhibit milder degrees of symptoms.
Researchers believe that this could be due to the way in which people who abstain from cocaine react to clinical doses of the drug. They experience a more intense high during the abstinence phase than when they were taking the drug regularly. The pleasures of this high make it difficult for them to stay away from the drug.
Cocaine and crack cocaine withdrawal symptoms should not be ignored either by the user or those who live and work with him. When withdrawal symptoms are detected early and managed promptly, the outcome of the cocaine-dependence program improves considerably and the user has the greatest chance of being drug-free.