Side Effects of Cocaine: The Path of Destruction 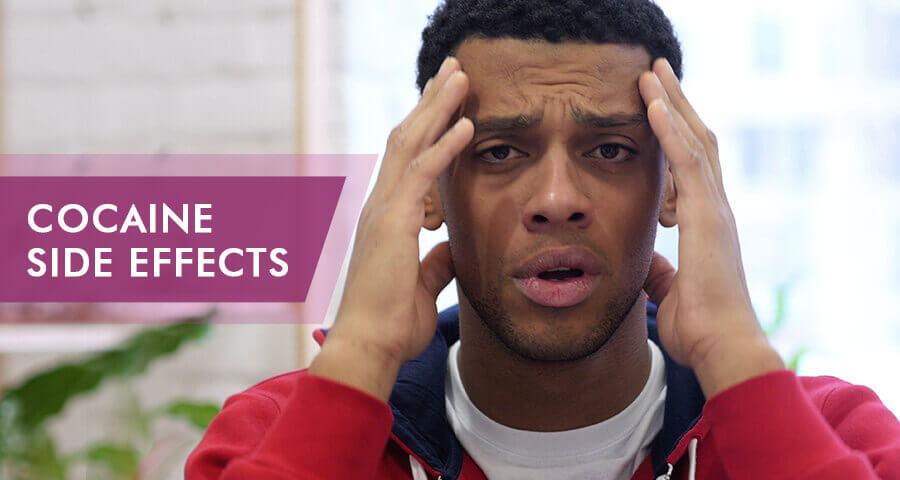 Abuse can lead to severe and adverse physical and psychological side effects. When learning about the side effects of cocaine abuse, one will realize why it is considered a dangerous drug.
The United States Drug Enforcement Administration (DEA) classifies cocaine as a Schedule II drug. This means that cocaine has a high chance of being misused.

The Dangers of Cocaine: Possible Irreversible Physical and Mental Damage

Besides the initial powerful kick, cocaine use triggers a host of short-term effects. The intensity of the symptoms depends on the amount of cocaine taken and the route of administration. For instance, cocaine is absorbed faster by the body when it is injected. The resulting high comes on within minutes, and so do the other side effects. Binging on cocaine magnifies the high and also triggers more intense side effects that are usually not associated with taking small doses. However, many of these short-term effects subside almost immediately.
But with repeated cocaine use, short- and intermediate-term effects cumulatively go on to trigger a range of other physical and mental symptoms that last for months or years. Some of these effects are irreversible. According to a study published by PubMed, cocaine abuse leads to irreversible structural damage to organs like the brain, heart, kidney, liver, and lung.
It is also disturbing to note that maternal abuse of cocaine adversely affects the brain and the heart of the developing fetus.
In some rare cases, an immediate effect of cocaine use can even be death. According to the National Institute on Drug Abuse, these are usually cases where cocaine use, usually an overdose, triggers a cardiac arrest or a stroke. Sometimes a cocktail of cocaine and heroin or cocaine and alcohol can trigger a fatal cardiac arrest.

How does cocaine work? The effects of cocaine manifest almost immediately after taking the substance, whether by inhaling, snorting, or injecting. That’s because cocaine enters the bloodstream and is absorbed rapidly. This leads to a buildup of dopamine, the “happy” chemical that the human body produces. The result is the instantaneous feelings of euphoria—the high—that cocaine users experience.
Initially, cocaine also increases the levels of norepinephrine and serotonin. The symptoms of a cocaine-induced high include:

These effects, however, do not last very long—15-30 minutes if the drug is sniffed and only 5-10 minutes if it is smoked. So some users binge on cocaine to experience the high again. Sometimes the side effects return, more intense, and manifest as angry outbursts, aggression, irritability, hallucinations, delusions, restlessness, anxiety, panic, and paranoia.

Some common short-term neurological side effects of cocaine use are increased heart rate and blood pressure caused by an increase in norepinephrine levels, and abnormal heart rhythms. According to this research, chest pain is one of the most common side effects of cocaine that requires a visit to the emergency room. That’s because cocaine constricts blood vessels in the short term and affects the natural rhythms of the heart. On the other hand, cardiac arrhythmia caused by cocaine use may not resolve on its own and can worsen and lead to a cardiac arrest. Sudden death from cardiac failure is possible even in first-time cocaine users or right after taking large amounts of cocaine.

What are the short-term neurological effects of cocaine?

The short-term neurological effects of cocaine are:

The other common short-term physiological side effects of cocaine are vertigo, uncontrollable muscle twitches, and tremors.
The neurological side effects of cocaine use include headaches, seizures, strokes, and coma. Cocaine use also tends to worsen existing headaches.
Seizures, strokes, and coma can accompany cocaine overdose. According to the findings of the study, conducted by Sean Treadwell and Tom Robinson, cocaine can lead to strokes and coma or sudden death even in persons with no cardiovascular risk factors. This is because cocaine constricts blood vessels and may lead to the formation of life-threatening clots.

According to the National Institute on Drug Abuse, sudden death right after taking cocaine can occur usually in cases where cocaine has been mixed with alcohol or heroin.
Cocaine and alcohol react to produce cocaethylene, a substance that magnifies the effects of alcohol and cocaine on the heart. According to research, cocaethylene can increase the risk of sudden death in persons who use cocaine mixed with alcohol.
Heroin and cocaine taken together can also lead to fatal consequences. Because the stimulating effect of cocaine is offset by the sedating effect of heroin, users may unknowingly binge on heroin. The effects of cocaine subside sooner than those of heroin. This then intensifies the effects of heroin and may cause respiration to slow down in the person and sometimes, stop altogether.

Cocaine consumption can cause permanent damages to the health such as:

The long-term effect of cocaine on the heart is well-documented. Cocaine causes:

There are several potentially life-threatening neurological side effects of chronic cocaine abuse.
Long-term use of cocaine increases the risks of strokes and seizures. Chronic users can also suffer from bleeding inside the brain and swelling of the walls of the cerebral blood vessels. Both these conditions can increase the risk of life-threatening clots forming inside the brain.
Chronic cocaine abuse can cause memory disturbances and increase the risk of developing Parkinson’s disease. This interesting study states that cocaine abuse damages gray and white matter in the brain. This impairs cognitive functionalities and inhibits the impulse control mechanism. Thus impaired, users exhibit poor decision-making, risk-taking tendencies, and rash, mindless behavior that can harm both themselves and those around them.
One of the most severe effects of long-term cocaine use is the development of cocaine dependence. For abuse to turn into addiction, considerable neurobiological changes must occur. The alterations in brain chemistry make it extremely hard for the addict to voluntarily give up cocaine. Trying to quit the addiction results in cocaine abstinence syndrome with unpleasant side effects—anxiety, paranoia, depression, and aggression—that resemble the “crash” of the cocaine withdrawal phase. So addicts are compelled to seek out cocaine.

Cocaine ravages the body from the inside out. Besides the physiological, neurological, and psychological symptoms, the drug also produces a range of long-term effects depending on the route of administration.
Snorting cocaine regularly can cause infection of the nose and other adjacent structures, persistently runny nose, bleeding, and loss of sense of smell. Users can also experience hoarseness and have trouble swallowing. Smoking cocaine damages the lungs and worsens the symptoms of asthma.
Many cocaine users prefer to inject the drug because it then reaches the brain quickly through the blood stream. Long-term cocaine users who inject the substance often have puncture marks on their forearms. There may be swelling at the site. Some users can experience allergic reactions to the cocaine itself or the adulterated versions of the drug sold on the streets. Users who inject cocaine are also at an increased risk of contracting diseases like hepatitis C and AIDS through sharing of infected needles.

Side Effects of Crack

Getting high on cocain entails tremendous health hazards, as well as legal liabilities. No one should even try to get high on the drug.

Cocaine Dangers for the Unborn Child

Yes, cocaine is extremely dangerous to the unborn child. Maternal cocaine abuse can severely hinder fetal organ development, often causing brain and heart deformities and functional deficiencies. These children often suffer from cognitive and behavioral disorders, and are at a higher risk of developing substance abuse disorders later in life.
There have been countless studies on and extensive media coverage of the adverse effects of cocaine on adults. But using cocaine during pregnancy can harm the woman and her unborn child as well. When a pregnant woman uses cocaine during the gestation period, the drug crosses the placenta and reaches the fetus. It is then distributed in the organs of the fetus in greater concentration than in blood. The developing heart and the nervous system of a fetus are at most risk from maternal cocaine abuse. There are both short- and long-term effects.
<h3″>The Effects of Cocaine Exposure on the Fetal Heart

According to this study, maternal abuse of cocaine leads to babies being born with structural deformities and functional deficiency of the heart and ventricle, abnormal heart rhythms, and conduction abnormalities. In many cases, these symptoms persist for months after birth.
A large number of studies have been carried out to determine the effect of prenatal exposure to cocaine on the nervous system.
The autonomic nervous system (ANS) regulates certain cardiac functions, and cocaine affects the ANS. In some studies, newborns that had been exposed to cocaine in utero had altered heart rate and heart rate variability. Many researchers believe that long-term prenatal exposure to cocaine can even depress the ability of the ANS to regulate cardiac functions to such an extent that these babies grow up with an increased risk of developing heart disease later in life.

The Effects of Cocaine Exposure on the Fetal Brain

Because cocaine affects the neurotransmitter pathways in the brain, there have been many studies on the effects of prenatal exposure to the drug on the developing brain.
Prenatal exposure to cocaine inhibits the neurological development of the fetus. The results are abnormalities in the transmission of signals and structural and functional deficiencies in regions of the brain that control cognitive functions. For instance, in this study, infants who had been exposed to cocaine in utero show lesser gray matter in the prefrontal and frontal regions of the brain that control executive functions.
Many of these changes are permanent and according to this study, cocaine-exposed children exhibit increasing degrees of cognitive, behavioral, attentional, and motor deficits as they grow older.
These children have difficulty learning, behaving appropriately in social situations, and coping with stressors in life. As a result, many of them go through life experiencing difficulties in forming and sustaining meaningful relationships, holding on to jobs, and leading independent and unassisted lives.
But more disturbing is the finding of this study. Prenatal exposure to cocaine increases the risk of the child developing substance-abuse and binge-eating disorders during adolescence.
Cocaine is one of the most destructive drugs out there that affects almost every major organ of the body and causes a range of unpleasant, bizarre, harmful, debilitating, and potentially fatal side effects. One must seek help to stall cocaine abuse in its tracks and prevent abuse from turning into the addiction.

Addiction Resource » Addictive Substances: The Anatomy of Drug Addiction » Cocaine and Crack Addiction and Treatment » Side Effects of Cocaine: The Path of Destruction