Addiction Resource » Drugs of Abuse » Cocaine » How Long Does Cocaine Stay In Your System?

How Long Does Cocaine Stay in Your System and How Fast Does it Act?

Cocaine’s mechanism of action includes blocking the reuptake of neurotransmitters responsible for feelings of energy, confidence, and euphoria. It binds to the neurotransmitter receptors and blocks their removal, which results in the increased accumulation of neurotransmitters such as dopamine, serotonin, and norepinephrine. The resulting continuous stimulation leads to pleasurable feelings, as shown in this research.

According to the University of Arizona study, the time it takes for coke to start acting depends on whether it was injected, snorted, or smoked. It also affects how long coke stays in your system. When it is smoked or injected, it reaches the brain the fastest within a few seconds. In the case of snorting, the feeling of high is achieved after 1 to 5 minutes. The mode of intake also affects the period of cocaine staying in the system of an individual.

How Long Does Cocaine Stay in Your System for Drug Tests?

A drug screening test can determine how long cocaine lasts and detect its metabolites in users’ blood, saliva, hair, urine, and sweat. The standard testing window for its detection is about 2-4 days, but this depends on how the test is being carried out. How cocaine stays in your system, especially the blood, saliva, and urine, depends on the sample type and how the test was carried out.

How Long Does Cocaine Stay in Urine?

How long does cocaine stay in your urine is usually 2-4 days. But after binges in chronic users, it can be detectable for up to two weeks. Urine testing is the preferred approach for screening coke use if there is no medical emergency.

How Long Does Cocaine Stay In Blood?

Blood testing is mostly used in emergency situations of acute intoxications. Coke can be detected in a user’s blood for up to 12 hours and its metabolite for up to 48 hours after the last consumption.

How Long Does Coke Stay in Saliva?

Coke’s half-life in the saliva is two hours, which means that it can be detected for only about 1 to 2 days after use.

How Long Does Coke Stay in Sweat?

The peak level of coke in sweat is between 4-24 hours, but it can stay there for several weeks.

How Long Does Cocaine Stay In Hair?

Hair testing is the most reliable test. It has the advantage of the largest detection window. But it also requires advanced detection techniques, which makes it less practical. The concentration of coke in hair is traceable for at least a month or two. 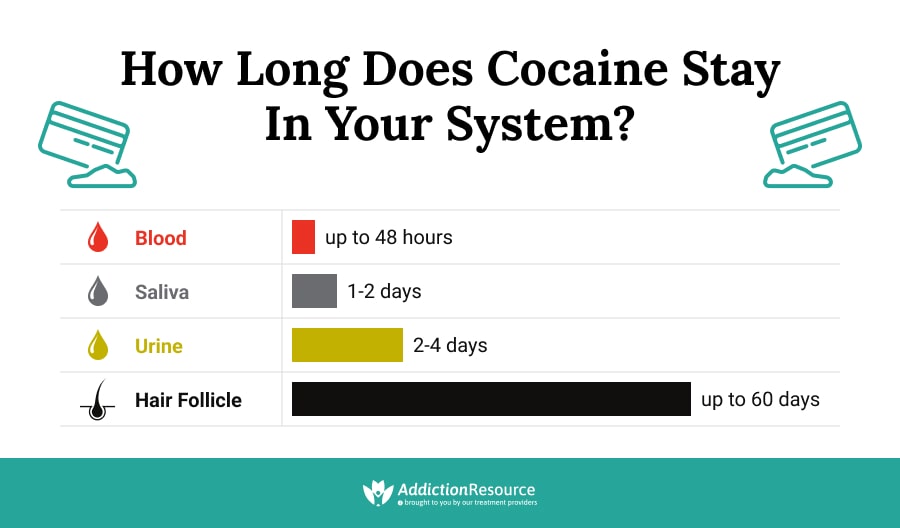 How long cocaine stays in the body depends on its half-life. It has an apparent half-life of approximately one hour. Its peak concentration in the blood, urine, and saliva is around 5-10 minutes after intake.

How long cocaine stays in your urine, blood, and saliva depends on their elimination times, which are as follows:

How is Coke Metabolized?

According to the cocaine mechanism of action, after its ingestion, it is metabolized by the liver. The liver breaks it down into smaller metabolites to be eliminated from the body through urination. The time coke stays in your system also includes its metabolites. 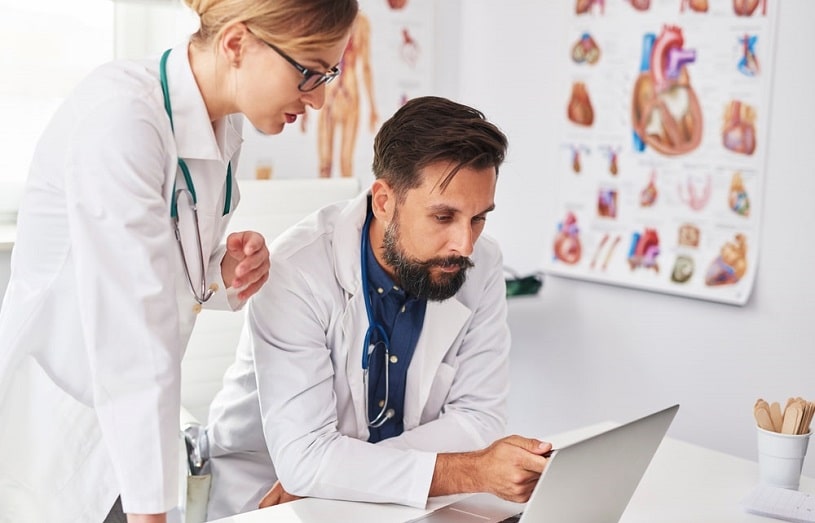 These Metabolites Include the Following:

Mixing it with alcohol delays the whole elimination process: it can take a month to clean the toxins. Consuming coffee also holds back benzoylecgonine in your body.

This metabolite is present in minimum quantities in humans after the process of metabolism completes in the liver.

Certain factors determine how long cocaine lasts and how it is metabolized in your body. 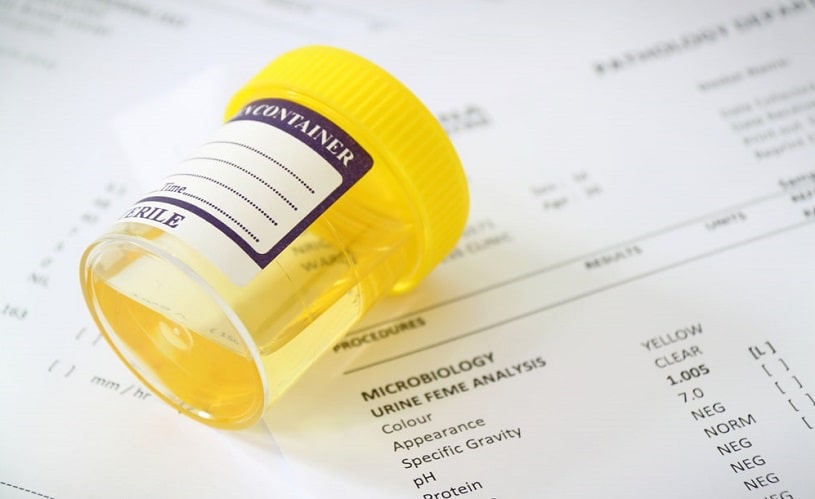 Some of the tests which can detect cocaine and its metabolites include:

Benzoylecgonine happens to have a much longer half-life than cocaine; it can reach six hours, sometimes more. And even longer in chronic users. So it takes much longer to get eliminated from the body than cocaine. It can even be detectable for several months in some specific tests. That is why it is the preferred substance to detect when testing for its abuse.

Immunoassays are drug tests that aim to detect benzoylecgonine. If coke itself can be traceable in minuscule amounts in the first hours of substance use, there is more time for its metabolites. Sporadic users will test positive for benzoylecgonine for the next 4-5 days, while that can go up to 12-20 days for chronic users. A level of 2 ng of benzoylecgonine per mL or urine is the threshold for declaring a positive drug test result. That makes benzoylecgonine a preferred substance to test for coke abuse.

The most common screening method for coke use is a urine test for benzoylecgonine. However, some laboratories with less accurate technology available sometimes obtain false positives. Certain medicines produce metabolites with a somewhat similar structure to benzoylecgonine while some other substances may cause a false positive. 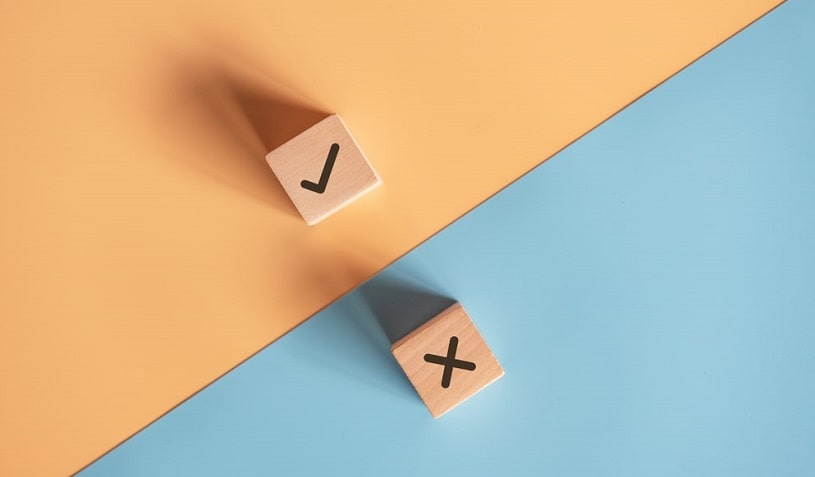 The Аollowing Substances May Cause a False Positive Test Result:

What Else One Should Know

Long-term cocaine usage leads to its accumulation in the body’s fatty tissues, particularly in the liver—every subsequent dose results in adding another fraction to the stock. As a result, this person has a permanent drug that releases in the bloodstream. Time it stays in the system can even lead to serious cocaine side effects and disorders. Professional help in such a case is highly important so that its addiction can be broken and the user can start to live a sober and healthy life. If addiction is suspected, one should contact a professional rehabilitation and addiction treatment center to guide the user and provide all the relevant information. Total detoxification of coke in long-term consumers usually takes six months, which can best be possible in a professional detox facility.

All this help, information, and guidance will help the patient during the treatment course and all the people around.