What Is Hydrocodone Addiction? Opioid Strengths and Uses

Hydrocodone is the most frequently prescribed opioid pain reliever in the United States. This potent medication is used when other pain medicines have been unsuccessful in alleviating symptoms. It is also an effective cough suppressant and is present in antitussives such as Tussionex, which is a chlorpheniramine hydrocodone combination.
Some of the other drugs in same class as hydrocodone include oxycodone and morphine, and like them, it has a high potential for addiction. According to DEA classification, hydrocodone schedule is II, indicating a high risk of physical and psychological dependence and addiction. What is in hydrocodone? Who is at risk of developing an addiction to this opioid drug? What can one do to prevent prescription painkiller addiction?

Hydrocodone bitartrate was first synthesized in Germany in the 1920s, and despite fears about potential addiction, it was approved for use in the United States because of its effectiveness in managing pain and suppressing cough. Over the next few decades, even as reports of its addiction potential became available, the use of this pain-relieving medicine grew. In the late 1990s, the hydrocodone-acetaminophen combination was introduced to the American pharmaceutical market

Hydrocodone drug class is a narcotic (opioid) analgesic. Like all opioids, it is a derivative of the poppy plant, but it does not occur naturally. Rather, it is semi-synthetic opioid that is manufactured by chemically modifying codeine, a naturally occurring opium derivative. In terms of chemical structure, it is a hydrogenated codeine derivative that is more potent and has a higher risk of addiction than its precursor.

How long does it take for hydrocodone to work? In addition to generic hydrocodone, the drug is available under different brand names, such as Vicodin, Lortab, and Norco. These immediate-release formulations provide quick pain relief and must be taken every 4-6 hours for continued pain relief. Extended-release hydrocodone formulations, such as Zohydro ER and Hysingla ER, are designed for gradual release of the drug into the body, and they provide prolonged pain relief of up to 12 hours. Misuse of both types of formulations can lead to addiction. 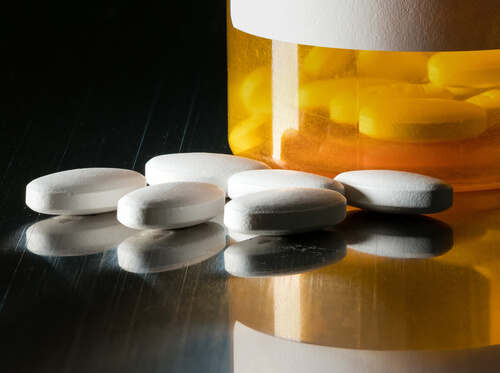 What does hydrocodone look like? Different hydrocodone strengths and combination products are prescribed for different uses. For example, Lortab 10/500 is pink hydrocodone with 10 mg of the opioid and 500 mg of acetaminophen. It is used for relief of moderate to moderately severe pain. Other products such as hydrocodone homatropine tablets, available under brand names Hycodan and Tussigon, are used for short-term treatment of a dry cough. Vicoprofen is hydrocodone without acetaminophen and instead includes an NSAID (ibuprofen) along with the opioid. All formulations that contain the narcotic have the potential for addiction.

Indications for Hydrocodone Opioid Analgesic Use

The two main hydrocodone uses are to alleviate pain and suppress a cough. The opioid is available with analgesics for pain relief. The medicine is only prescribed for intractable pain that cannot be managed with safer medicines that have less risk of addiction. Hydrocodone mechanism of action is by binding to opioid receptors in the brain and altering the way pain is perceived.
Hydrocodone for a cough consists of combination products that include the narcotic plus an anticholinergic like homatropine or an antihistamine like chlorpheniramine. Hydrocodone cough syrup is a centrally-acting medicine that suppresses the cough reflex. Misuse of these cough syrups can lead to addiction because of their narcotic content.

The drug is available in multiple formulations, such as tablets, capsules, and syrups, for ingestion by mouth. Some people misuse this medication and develop an addiction to it. Addicts may crush the tablets and snort hydrocodone to obtain a rapid high.

This can be extremely dangerous and can damage the nasal mucosa and lungs.

Like all opioids, this medicine is a central nervous system depressant. Side effects include slowed breathing, sedation, dizziness, mental fog, euphoria, agitation, and constipation. Doctors advise against the use of alcohol and hydrocodone together because this can result in fatal respiratory depression. In addition, there are a number of other dangerous hydrocodone interactions, which is why the medicine should only be taken by prescription and under supervision by a physician.

Prescription Pain Pill Use and Abuse: What Do the Numbers Say?

The misuse of hydrocodone opiates is a serious public health concern and a national crisis in the United States. People who misuse narcotic analgesics are at risk of addiction as well as hydrocodone overdose symptoms including coma and death. Here are some statistics that reveal the true extent of hydrocodone abuse:

Yes, it is a powerful prescription painkiller with a high potential for abuse and addiction. People who are dependent on the medication may experience certain signs and symptoms upon sudden withdrawal from hydrocodone. People who have developed an addiction to prescription pain relievers tend to seek out the drug compulsively. Some addicts attempt to reduce the amount of non-opioid components in combination products to nontoxic levels with techniques such as hydrocodone cold water extraction. However, these processes do not protect them from the dangers of opioid addiction and overdose.

What are hydrocodone addiction risks?

This is a class of drugs that includes street drugs such as heroin as well as prescription pain relievers. Doctors prescribe these medicines to help manage chronic pain in cancer patients or pain after major surgery or injuries. In addition to hydrocodone side effects and the risk of overdose, misuse of these drugs can lead to dependence and addiction.

People who misuse prescription pain pills can develop a tolerance to the drug. Once tolerance develops, the person must take higher doses to achieve the same effect. Tolerance can progress to an addiction to hydrocodone pills. Addicts cannot stop taking the drug even if they want to because of physical and psychological dependence. They end up spending an inordinate amount of time trying to obtain, use, and recover from drug use. They continue abusing the medication despite being aware of its negative effects. Some of the causes and risk factors of prescription painkiller addiction include:

If any of these signs are noticed in someone who is using prescription pain pills, seek professional help. If the medicine is not used exactly as prescribed, it can quickly progress to chemical dependence and a compulsive need to use the drug regardless of the consequences.

Who is at Risk of Addiction to Opioids?

Addiction is common amongst patients who were originally prescribed the medicine for pain management. Some patients gradually increase their dosage when they find that the prescribed dose no longer works and eventually develop tolerance and addiction. That’s why it’s essential to follow the doctor’s orders on the best way to take hydrocodone.
In addition to people with chronic pain problems, certain populations are at increased risk of hydrocodone addiction:

There is a misconception that prescription medications are safer than street drugs. In 2011 there were more than 82,000 ED visits related to the non-medical use of this medicine.  Recreational users abuse the drug for its euphoric effects. Because of the widespread warnings about the dangers of oxycodone, many people falsely believe that hydrocodone acetaminophen high is a safer alternative, even though this combination contains Tylenol which can cause severe liver damage.

People who have been prescribed narcotic analgesics can take several steps to reduce the chances of developing an addiction to these medications:

Hydrocodone half-life is around 4 hours, meaning the effects of the medication start to wear off after a few hours. People with chronic, intractable pain sometimes start taking higher or more frequent doses to control their symptoms and eventually develop an addiction.
Addiction to hydrocodone opiates is not easily recognizable in people with chronic health conditions who have been prescribed the drug for medical reasons. However, there are some hydrocodone addiction signs that should raise a red flag. Abuse is somewhat easier to identify in individuals who do not have a prescription for a valid medical diagnosis. Signs and symptoms of abuse include:

If one suspect someone may have an addiction to prescription pain pills, it is important to seek help. Abuse of these medications can result in a number of serious adverse effects including coma and death.

Helping Someone With An Addiction to Pain Pills

If one think someone is struggling with an addiction to prescription opioids, it’s important to do something about it. If one decide to stage an intervention, approach the person carefully in a non-confrontational manner. It does not help to put the person on the defensive.

Is hydrocodone abuse treatable at home?

It can be extremely dangerous to attempt hydrocodone addiction treatment at home. Detoxification from prescription pain medications needs to be closely monitored to manage potentially life-threatening side effects and debilitating withdrawal symptoms. That’s why addiction treatment must be obtained at a reputable drug rehabilitation center.

Can hydrocodone addiction be treated medically?

Professional help for opioid addiction is available at outpatient and inpatient drug rehabs around the country. Once addiction is confirmed, appropriate treatment will be recommended, including medication-assisted drug withdrawal. Counseling sessions during drug addiction treatment help prevent relapse and ensure long-term recovery.