What is Alcohol Dementia? How Can ARD Be Treated?

Most people know that prolonged alcohol abuse can cause physical illnesses such as liver and heart disease. Still, a few know that abuse can lead to many mental illnesses, and one of the most dangerous is alcohol dementia. Alcohol-related dementia (ARD) is caused by prolonged, excessive consumption of alcoholic drinks.

While many people are concerned about the rise in Alzheimer’s disease, it’s important to remember that alcohol-induced dementia can result in similarly impaired cognitive function and neurological damage. And while the causes of Alzheimer’s and its ability to strike anyone at any time are not fully understood, there is no such mystery about ARD.

Keep reading to get several cautionary facts about alcohol and dementia, one of the most serious results of alcohol abuse. Dementia is not just something that could happen to elderly grandparents. ARD can potentially happen to anyone of any age.

What is Alcohol Dementia?

Alcohol dementia is a condition characterized by impaired neurological and cognitive functioning and excessive alcohol consumption over many years. Other conditions and side effects may influence ARD. Still, the link between dementia and alcohol consumption cannot be ignored – the primary cause of the condition is continuous alcohol abuse.

Many people think of ARD as a problem that only affects the elderly or those with other underlying conditions that worsen over an extended period as they enter old age. This is not true of ARD caused by alcoholism. Cognitive disabilities from alcohol can develop and slowly deteriorate as the individual ages. According to reports, alcohol abuse may accelerate changes that may typically be characterized as age-related cognitive degeneration. Older adults are most vulnerable to ARD, but younger people can be affected too.

ARD is thought to be a reactive combination of conditions triggered by abuse. In the following section, we examine the two underlying conditions most associated with alcoholism and dementia.

Statistics have shown that at least 20% of admissions to the state mental hospitals in the US are ARD cases. However, the debate of dementia or neurotoxicity due to alcohol abuse still remains.

At this point, one may be tempted to ask, “Does alcohol cause dementia?” The answer is no. There is a difference between occasional or even frequent consumption and the type of abuse that can lead to alcohol-induced dementia. Drinking to the point of feeling tipsy or inebriated is one thing. Still, if one is prone to drinking until one becomes ill, highly intoxicated, and subsequently hungover on a regular basis, this type of behavior qualifies as abuse and can over time cause ARD.

Indications of Abuse May Include:

Alcohol-related blackouts, or frequently ‘passing out’ while drinking, are also dangerous and have a cumulative effect on the human brain.

Alcohol can and will, over time, impair and potentially destroy mental capabilities. Coupled with the severe physical and social problems abuse can cause, alcohol abuse can seriously influence cognitive ability and memory. If present along with Alzheimer’s disease, ARD can become a progressive and incurable condition known as alcohol-induced psychosis. 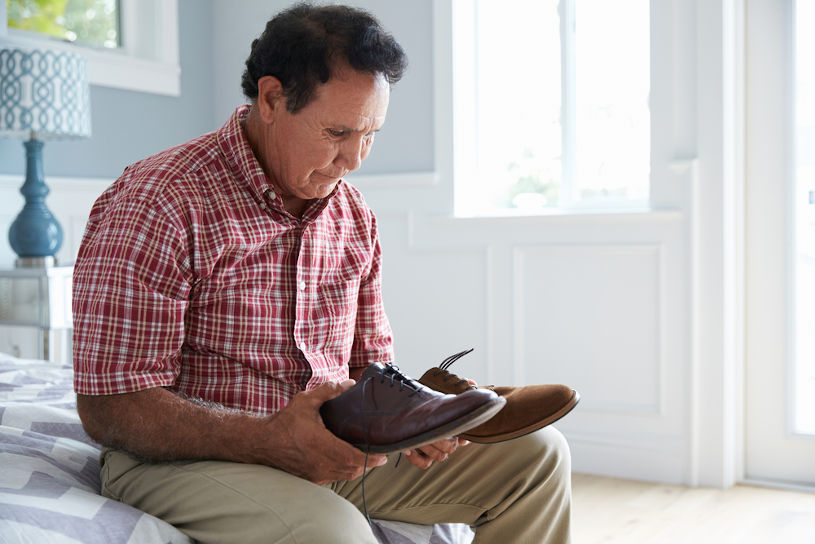 There are quite various dementia types, such as Primary Progressive aphasia (which affects speech and reasoning). In the case of Korsakoff syndrome, the affected person may tell lies without even knowing. There are both early and full-blown signs and symptoms of ARD.  These warning signs include:

The individual may exhibit observable differences in their personality, ranging from speech to cognitive abilities. The person may be completely unaware of this difference and has the tendency to forget every encounter they had.

A person suffering from alcohol-induced dementia may forget familiar road maps and routes that they use regularly and may get lost following familiar roads.

Alcoholic dementia causes memory disruption on a critical level. The brain is unable to function at optimum capacity in retaining small current details, and the individual may find themselves forgetting basic information, even as much as being unable to have a conversation because the person cannot remember pieces of details.

A clear sign of ARD is declining cognitive abilities such as the inability to cook, poor problem-solving skills, and frequent confusion. Individuals suffering from critical alcohol-related dementia may lose track of time or even forget their current location.

In most cases, alcohol dementia may degenerate to a stage where the person would suffer from speech inhibition; the person may find it hard to understand conversations or even create words themselves. This also applies to reading, writing, and other activities where communication is inclusive.

Comparing the neuropsychological differences between alcohol-induced and other types like cortical, subcortical, Alzheimer’s disease, and vascular dementia, it was reported that patients who struggled from alcohol-induced dementia demonstrated an even worse case of amnesia than all other categories. Patients with ARD exhibited distinct impairment in memory and cognitive abilities.

While alcohol abuse is the main cause of this form of dementia, there are other critical mental health problems that are caused by ARD, one of which is the Korsakoff syndrome. So, what is the relationship between alcohol-induced dementia and Korsakoff syndrome?

Alcohol dementia has been found to cause a degenerative brain disorder called Wernicke’s encephalopathy, which occurs largely due to a deficiency in Thiamine (vitamin B1).

How Does It Happen Exactly?

Alcohol abuse leads to a constellation of negative effects such as eating disorders, dietary deficiencies, vomiting and ion depletion, and others. The deficiency of Vit B1 in the hypothalamus and thalamus of the brain leads to critical health conditions such as low blood pressure, mental confusion, poor muscle coordination, among other problems.

The deficiency in Vit B1 develops into Korsakoff syndrome, also called an amnesic syndrome. Korsakoff causes the damaging of nerve cells and other coordinative and cognitive cells in the spinal cord and the brain. Especially the part of the brain that is largely responsible for memory. The problem with the mental disorder is the inability to acquire new memories and retrieving past memories.

Even though Korsakoff’s psychosis and Wernicke’s encephalopathy are related in terms of symptoms and causes, medical professionals believe the two disorders to be different stages of the mental disorder.

Alcohol dementia may result in irreversible brain damage, and the alcoholic will continue to experience memory deterioration despite quitting alcohol. 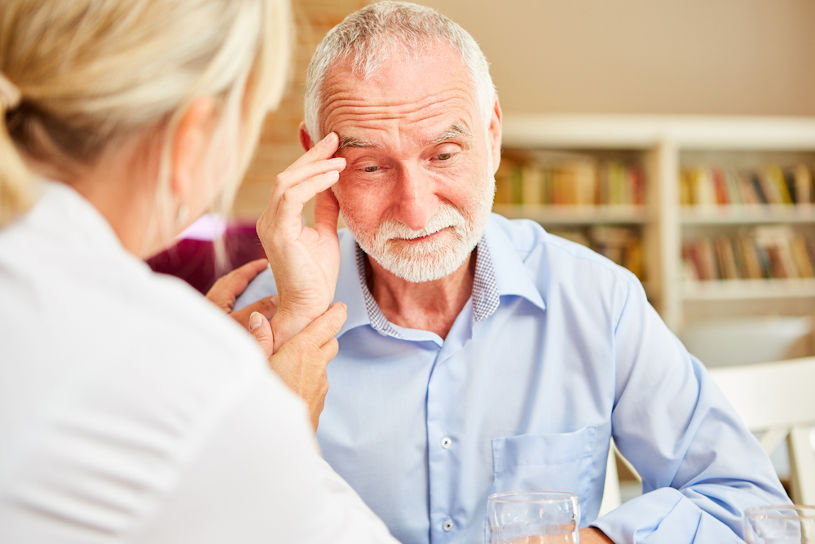 Some of the Tests that Can be Conducted to Diagnose Alcoholic Dementia are:

It may be a bit difficult to detect its early stage in the elderly as its signs may be similar to issues that may occur with aging. An early diagnosis is important for effective treatment.

The treatment methods reserved for ARD cases are largely dependent on the individual and their history with alcoholism. The first stage of treatment is usually quitting alcohol. It is imperative to stay off alcohol because of its effects on the brain and health risks. Quitting alcohol must be followed by a healthy diet that is rich in vitamin B1. In serious cases, intravenous therapy may be necessary to replenish the body of essential nutrients such as B1, which is needed for brain functions and general health.

The Use of medications such as Memantine 20 mg/d as an anti-dementia agent also proved effective even in cases of individuals that have experienced an alcohol relapse.

A prompt diagnosis of ARD and alcohol cases can be beneficial, as symptoms discovered early can be treated in time. A full-blown Wernicke-Korsakoff syndrome can be complicated to treat; however, with intravenous therapy (IV), the development of the mental condition can be lessened.

The risk of alcohol-induced dementia is high in adults that use alcohol abusively. The health problems associated with alcoholism are extremely high, and the risk with alcohol and co-occurring cognitive disabilities makes it all the more terrifying. Those who are addicted to alcohol can seek care and treatment from a rehab or addiction support center. There are support services and helplines available for personal or family use.

How to Prevent Alcohol-Related Dementia?

The probability of health problems connected to alcohol and cognitive disabilities usually starts from casual drinking. Living a certain lifestyle can expose one to alcoholism, and the more drinks a person takes, the closer they are to alcohol-related health problems, irregular eating habits, and disconnection from the family in some cases. Before the downward spiral from alcoholism, one may abandon family and disconnect from friends and other probable sources of help. It is a fact that those who interact with their family, even with their addictions, have a better chance of beating the addiction. Those who seek help or support promptly may scale through the addiction phase.

The best way to prevent alcohol-induced dementia is to completely abstain from drinking, eat a balanced diet for good health, and seek professional help if necessary.