MAOI Drugs: Their Side Effects, Uses, And MOA

MAOI antidepressants are among the four common types of depression medications. These are prescription drugs that are mainly used for the treatment of mild to moderate depression. In the United States, the use of MAOIs is low. In 2005, it was reported that the rate of prescription of MAOI drugs is only less than 0.1%. Furthermore, in 2007 the yearly prescriptions of MAOIs were around 1.4/100,000. Although these statistics are decreasing, it is necessary for patients who are treated with these medications to know what is an MAOI.

In this article, information about MAOIs’ mechanism of action, uses, side effects, list of MAOI drugs, food and drug interactions, contraindications and warnings, and how to treat, manage, and prevent MAOI antidepressants addiction will be provided.

What Are MAOI Antidepressants?

What is an MAOI? MAOI depression medications have been in use since 1959. Standing for Monoamine Oxidase Inhibitors, these were among the most common antidepressants used. Their effects were discovered by accident when certain compounds that inhibit monoamine oxidase were used in tuberculosis patients, and euphoria was among the observed side effects of use.

These medications are effective. However, they have declined in popularity in recent years. As newer depression drug classes have developed, doctors have turned to selective serotonin reuptake inhibitors (SSRIs), serotonin-norepinephrine reuptake inhibitors (SNRIs), and TCA antidepressants more. MAOI drugs are often not used until other classes are deemed ineffective for a given patient.

In the United States, There Are Several Monoamine Oxidase Inhibitors. The List of MAOI Drugs With FDA Approval Is as Follows:

How Do MAOI Antidepressants Work?

Understanding MAOI antidepressant mechanisms of action requires understanding the function of monoamine oxidase in the body. According to a clinical review of psychiatrists from Canada, monoamine oxidase is an enzyme that assists in removing norepinephrine, serotonin, and dopamine from the brain. These are all so-called “feel-good” chemicals. For individuals with depression, having these chemicals removed from the brain can leave them with levels so low that they fall into significant depressive episodes.

Furthermore, the mechanism of MAOIs is inhibiting the actions of the monoamine oxidase enzyme. This results in higher levels of norepinephrine, serotonin, and dopamine in the brain. As a result, someone taking MAOI drugs is then likely to feel less depressed and suffer from fewer extreme mood changes. How long antidepressants take to work can vary. MAOIs are among the fastest-acting depression medications, with effects being felt as soon as two weeks after beginning treatment. However, full effects are generally not experienced until four to six weeks after the first dose is taken. 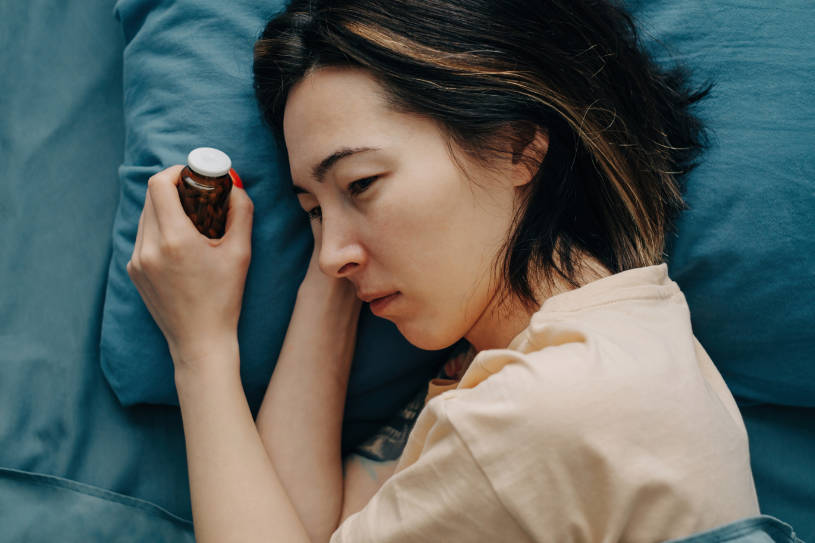 The FDA-approved use of monoamine oxidase inhibitors is for the treatment of major depressive disorder. In one study published in the Journal of Affective Disorder, MAOIs can improve the health conditions of patients with treatment-resistant depression. However, as new clinical trials and studies appear, MAOIs can also be used for other health conditions. These are called off-label uses, and the common one is for the treatment of anxiety. Antidepressants and anxiety treatment are common, and MAOIs are no exception. Consistent with a clinical review from the United States, MAOIs can be used to treat the depressive states of mixed anxiety and agoraphobia.

Other Off-Label Uses of MAOIs Include:

Sometimes patients have sexual dysfunction that is not due to depression but still related. Most antidepressants and sex drive effects are negative. However, for some, MAOIs can increase sexual desire and performance. Another concern is the way antidepressant drugs and weight gain interact. While some MAOIs can cause weight gain, others can make it easier for patients to manage their binge eating disorder and help them lose weight.

Side Effects Of MAOI Antidepressants

Some of these short-term effects include the following:

Aside from these, when the MAOI inhibitor Selegiline is administered in the form of a patch, a skin reaction may occur at the patch site. Based on a study published in the American Family Physician, up to 18% of those taking the medication transdermally may experience those symptoms listed above, while ⅓ of the patients will experience skin reactions.

Although the use of MAOIs has declined and death due to monoamine oxidase inhibitors is rare even though the risk of toxicity remains possible. When a patient uses these medications for a longer period, long-term side effects can occur. MAOI antidepressants abuse can also increase the risk of these side effects. Some of these include insomnia, weight changes, and organ damage.

Just like the other antidepressant side effects, there is an association between MAOI antidepressants abuse and sleep disturbance during the day and night. Based on the study of researchers from Massachusetts, the use of monoamine oxidase inhibitors can cause or exacerbate insomnia, and this is one of the reasons why some patients stop the use of these medications.

Monoamine oxidase inhibitors are likely to induce weight gain. However, the severity of this long-term effect depends on the antidepressant. In a clinical review of pharmacists, it was reported that the drug Phenelzine is most likely to cause weight gain. In terms of Isocarboxazid, weight gain is less common. On the other hand, no weight gain effect is associated with Seleginine and Tranylcypromine.

As cited in a study published in the Drug, Healthcare and Patient Safety, the prevalence rate of experiencing sexual dysfunction during monoamine oxidase inhibitors treatment is 40%. The common signs of sexual dysfunction include delayed orgasm and reduced libido. Furthermore, men are slightly at a higher risk of developing this health condition than women, with a prevalence rate of 62% and 60%, respectively.

Another long-term effect of MAOI antidepressants abuse is hepatotoxicity. The liver injury will usually arise 1-3 months after the initial dose of the antidepressant, specifically, Phenelzine. Although these were only acute cases, severe jaundice and fatalities due to liver injury were also reported.

Depending on the patient, no side effects or symptoms may develop. However, most monoamine oxidase inhibitors users do experience at least a few side effects. In some cases, they are significant enough to stop use. All patients taking these medications need to be closely monitored by a doctor to ensure side effects are not potentially deadly, and if stopping is needed, make sure that the use is ended safely.

Whether someone is abusing their medication or just contraindicated for monoamine oxidase inhibitors use, once the medicine becomes dangerous, it is time to stop. However, abruptly stopping the use of these medications causes withdrawal symptoms.

Food and drug interactions are highly possible to occur when it comes to monoamine oxidase inhibitors. Usually, MAOIs interact more with foods than most other medications. According to a study published in the Journal of Clinical Psychiatry, when an MAOI inhibitor is mixed with any food that contains tyramine, hypertensive crises can occur.

Some of the Foods Containing Tyramine Include:

Grapefruit and antidepressants also should not be mixed as the former contains small amounts of tyramine. Additionally, alcohol consumption should be avoided. Drinking on antidepressants is dangerous as this could cause an increase in blood pressure.

Moreover, for the Drugs That Interact With MAOIs, Take a Look at the Information Below:

Take note that serotonin syndrome is a fatal condition that results in excess serotonin levels in the system, and the mortality of this condition can be as high as 12%. To avoid this fatal event, patients are advised to tell their medical doctor about all the drugs, substances, and food, including the natural antidepressants they take. Medical doctors are likewise encouraged to establish rapport with their patients so that the patients could be more confident in sharing their personal information.

Anyone With the Following Health Conditions Is Advised to Avoid the Use of Monoamine Oxidase Inhibitors:

In a study of medical doctors from Virginia, orthostatic hypotension is the most common side effect of MAOI medications. However, there is a risk of antidepressant overdose that can lead to hypertensive crises and irregular heartbeat. Also, taking monoamine oxidase inhibitor antidepressants while pregnant or breastfeeding is not recommended.

A Group of Medical Doctors from Australia Reports the Following Dangers to Both Mother and Child:

Sometimes, knowing this information makes a patient stop the use of the medications. But, MAOI medications should not be stopped suddenly because antidepressant withdrawal symptoms would occur. How to get off antidepressants safely requires tapering off the drugs and being under medical supervision. Any changes during treatment should be discussed with a doctor.

How To Treat MAOI Antidepressants Addiction

With drug rehab centers, it is possible to end dependence on MAOIs safely and effectively. In these health resources, there are treatment stages when it comes to MAOI antidepressants addiction. A healthcare professional from these institutions may consider drug intervention and develop a relapse prevention plan for a safer, faster, and more successful MAOI antidepressants addiction recovery. During this time of the pandemic, patients can also consider online Narcotics Anonymous meetings.

Is Lexapro an MAOI?

Lexapro or Escitalopram is not a monoamine oxidase inhibitor. It belongs to the drug class selective serotonin reuptake inhibitors or SSRIs.

Is Zoloft an MAOI?

Zoloft or Sertraline is not a monoamine oxidase inhibitor. It belongs to the drug class selective serotonin reuptake inhibitors or SSRIs.

Is Wellbutrin an MAOI?

Wellbutrin or Bupropion is not a monoamine oxidase inhibitor. It belongs to the atypical antidepressants.

Is Prozac an MAOI?

Prozac or Fluoxetine is not a monoamine oxidase inhibitor. It belongs to the drug class selective serotonin reuptake inhibitors or SSRIs.