What Are Atypical Antidepressants?

The atypical antidepressants list includes medications that have the ability to alleviate or eliminate symptoms of Major Depressive Disorder (MDD) but do so in a way that is unlike the mechanisms of action of common antidepressants. The majority of these medications are not well-known, and many doctors will only prescribe them if other types of depression medications have been demonstrated not to work, or they have produced significant and intolerable side effects.

Each of these medications works in a different way and the spectrum of different atypical antidepressant side effects also varies. As a result, selecting the right medication requires careful consideration and potentially trial and error. Therefore these drugs should never be used without medical supervision.

Other classes of depression-fighting medications get their name based on a shared mechanism of action. For atypical antidepressants, the exact opposite is true – they get their name based on the fact that there is no mechanism of action that unites them. As such, the atypical antidepressants mechanism of action must be considered on a medication by medication basis. The MOAs of all the drugs in this group affect neurotransmitters in the brain, altering brain chemistry and changing communication within the brain’s circuitry. It is how they do this that varies. Some may target dopamine, others serotonin or norepinephrine, or any combination of the three.

How long it takes for antidepressants to work also varies between medications. However, like other depression-treating drug classes, effects tend to be felt somewhere between four and eight weeks after starting the medicine. This can be frustrating for people looking to feel better quickly, but it takes a while for the drugs to make a significant difference in brain chemistry. 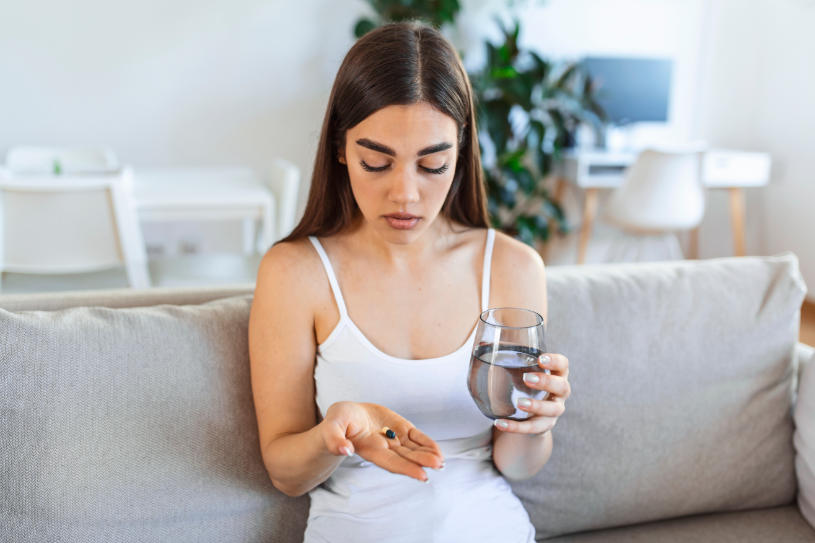 The most common indication for the use of atypical antidepressants is the management of depression that is refractory to the more commonly used first line agents. However, like their MOA, the specific uses of different members of this group varies on a drug to drug basis. For example, the most known agent in this group, Bupropion along with being able to treat Major Depressive Disorder (MDD) can also be used to tackle specific symptoms such as hypersomnia, weight gain, and fatigue in combination with typical antidepressants, as well as be used for smoking cessation. Another known agent Trazodone, can be used for sleeping difficulties and nightmares that are associated with posttraumatic stress disorder (PTSD).  Therefore it is common to see these medications being used not just for depression but for other mental disorders as well.

The List of Mental Health Conditions That Can Be Managed With Medication From This Group Include:

It is very important to note that the conditions mentioned above are managed by different medications and a single agent may not be suitable for all conditions.

As with discussing the MOAs and uses, atypical antidepressants side effects, both short- and long-term, also vary from one drug to the next and can even be specific to a given agent. The sections below give atypical antidepressants side effects associated with the most commonly used agents from the group. Individuals should inquire about the side effects associated with the specific agent that have been directed to take with the prescribing medical doctor.

Physical and Psychological Short-term Atypical Antidepressants Side Effects Include:

In some cases, patients will be given the option to see if the side effects will go away with use or just live with them if they are less significant than the effects of their depression or other conditions. However, given that some of these side effects can be significant or intolerable to users, the prescribing doctor may choose to have the patient discontinue use or compare atypical antidepressants vs SSRIs, SNRIs, or TCAs and consider switching the patient to one of the alternative agents.

Lastly, the information about atypical antidepressants side effects mentioned above is not exhaustive and includes those which are the most frequent (>5%), therefore users should consult their prescribing physician before starting these medications or look for herbal antidepressants that may also be an option to cope with some symptoms of depression and anxiety.

The correct medication should be selected only by a medical professional and should be tailored to an individual’s specific mental health condition. Therefore it is important to remember that these medications should never be taken without direct medical guidance and supervision.

Unfortunately, insufficient information exists regarding atypical antidepressant list of side effects.  A study by the Massachusetts General Hospital’s Depression Clinical and Research Program that evaluated late-onset side effects that are reported during long-term treatment found the following adverse effects to be the most frequently reported.

As such, much information still remains unknown about adverse effects associated with long-term use, and it is important to discuss any and all new concerns one may have with their prescribing medical doctor while using any of the medications mentioned in this article.

Because there is such variety within the atypical antidepressant drug class, users need to research information to know exactly what contraindications and warnings may be associated with their specific prescription.

Some contraindications and warnings that should generally be considered include:

Individuals should consult their prescribing physicians for the full list of contraindications and warnings, as well as other side effects of antidepressants that are specific to the medication they are being prescribed to treat their mental health disorder or are specific to them.

Individuals suffering from atypical antidepressant abuse and addiction require professional medical therapy from detoxification and drug rehabilitation centers to help them overcome their substance misuse. These facilities help individuals during their recovery process by providing medical supervision to treat any associated adverse reactions as well as regimens that help them alter their behavior or mindset in order to cease use and maintain long term abstinence. What refers to getting off antidepressants, it is important to note that individuals should never stop any antidepressant medication use abruptly and on their own as this can put them at great risk.