Natural Antidepressants And How To Treat Depression Without Drugs

Can One Buy Antidepressants Over The Counter?

The list of MAOI antidepressants, SSRIs, SNRIs, Serotonin Modulators, and Tricyclic antidepressants contains many drugs that proved effective in treating depression. But these cannot be purchased over the counter without a prescription. One can buy only natural alternatives to antidepressants such as St. John’s wort, Omega-3 fatty acids, Saffron, SAM-e, Folate, 5-HTP, DHEA, zinc, and other vitamins and minerals without visiting a doctor. Although over-the-counter options work well for some people, there are both pros and cons of antidepressants. Some can cause adverse neuropsychiatric reactions in patients or can interact with other drugs from the list of SNRIs, SSRIs or MAOIs.

What Are Natural Antidepressants?

These are medications that are SSRI alternatives and are effective at treating the mental disorder known as depression. They work in the brain in a similar way to the mechanism of action of antidepressants and help to alleviate some of the symptoms associated with depression. Over the years, there has been a spike in the number of people using alternative medicine. For instance, WHO research notes that about 70% of the world’s population prefers alternative medicines. So, it is not surprising that more people are treating depression without antidepressants. 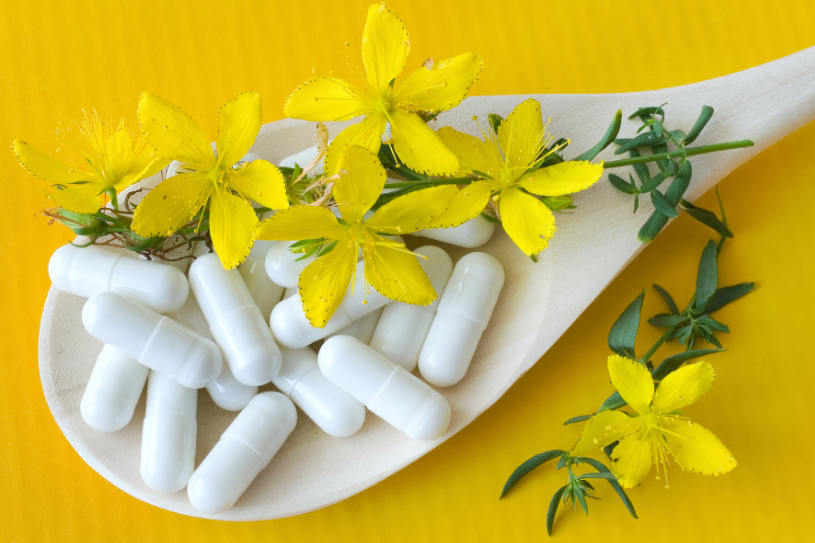 However, it comes with some side effects. Among the side effects, it is worth mentioning dizziness, dry mouth, constipation, confusion, and gastrointestinal symptoms. It should be noted that St. John’s wort can interact with some antidepressants leading to an alarming increase in serotonin.

Some side effects of omega-3 fatty acid supplements include fishy burps and stomach upset with higher doses and the possibility of increasing the effects of blood-thinning drugs. The advised dosage is no more than 3 g per day to avoid the risk of bleeding.

One of the natural herbal antidepressants is saffron. It is very popular in areas both as a herb and a spice in countries such as China, Greece, Egypt, and India. Saffron has anti-inflammatory and antioxidant properties, and its thread-like stigma and petals have proved to be efficient in mild and moderate depression. Saffron has shown favorable short-term results in patients with depression, but more studies are needed to clarify its potential. Saffron works in the brain by increasing serotonin. The increase of serotonin regulates happiness and lessens anxiety. The herb is as efficient as an antidepressant and a clinical study of the effects of Saffron showed significant improvement in patients with depression. However, because saffron is one of the most expensive alternatives to antidepressants, many websites are selling low-quality saffron, with no health benefits. Caution is required when purchasing saffron supplements.

Because the effects of some of these alternatives to antidepressants can be severe, patients should not use them without consulting with a doctor. No one also should replace their prescribed medications with OTC alternatives, as the reactions can be unpredictable, causing more damage than benefits.

S-adenosylmethionine or SAM-e is a compound that is produced naturally in the body from adenosine triphosphate (ATP) and the essential amino acid methionine. The compound is involved in methylation, a process that regulates neurotransmitters such as serotonin. Therefore, SAMe might play a role in depression. Although current research has shown that SAMe can offer positive effects in the treatment of depression, the studies were made on a small number of people. That is, a more in-depth research is needed to consider the SAMe among the treatments for depression.

Another option for those who choose alternatives to antidepressants over the counter is folate. Folate or B-9 is a vitamin that plays a vital role in the formation of red blood cells, cell growth, and division, protein metabolism, as well as prevention of neural tube defects. Folate deficiency may lead to anemia and major depressive disorder, among other health problems. Although folate supplements have little efficacy in treating depression, folate can boost the effects of antidepressant drugs. The drug works by modulating the levels of tetrahydrobiopterin also known as BH4. Tetrahydrobiopterin is essential in the formation of the neurotransmitters dopamine and serotonin. Therefore, folate boosts the production of BH4 which in turn regulates the production of serotonin, helping to treat depression.

A study showed that patients who were treated with folate in addition to other antidepressants registered significant improvements. Some side effects of folate include poor appetite, nausea, funny taste in the mouth, bloating or gas, feeling overly excited or depressed, trouble sleeping.

5-hydroxytryptophan or 5-HTP is an amino acid that the body produces from l-tryptophan, a dietary amino acid. Also known as oxitriptan, it is one of the most common SSRI alternatives. As one of the antidepressants OTC, Oxitriptan can be made into serotonin which aids in the treatment of depression. As already mentioned, serotonin is the chemical in the brain responsible for regulating mood and happiness. An increase in serotonin may result in the patient feeling happy and excited. 5-HTP might prove efficient in depression if it’s integrated into a patient management plan, not being administered on its own. With regards to its efficacy, the FDA assessed the drug but refused to include it on its list of medications approved for the treatment of depression. However, 5-HTP is contraindicated to administer this amino acid alone, as it can facilitate the depletion of neurotransmitters. Together with creatine, 5-HTP might boost the effectiveness of SSRI medication.

Another of the herbal antidepressants that is an alternative to antidepressant drugs is DHEA or Dehydroepiandrosterone. DHEA is a hormone naturally produced by the body which helps to produce other hormones such as testosterone and estrogen. Specialists have linked changes in DHEA levels with depression. They believe that DHEA fights depression by increasing the levels of testosterone in men and estrogen in women. Several studies showed that DHEA could improve depression symptoms in patients with anorexia nervosa, schizophrenia, adrenal insufficiency, and HIV. Even if DHEA supplements are usually well-tolerated, some possible side effects include fatigue, hair loss, high blood pressure, oily skin, stomach upset, facial hair in women, changes in the menstrual cycle.

Low levels of zinc in the body can lead to a drop in immunity and, therefore, affect mood. Studies support the use of zinc supplements as an adjuvant in depression, being efficient in reducing depressive and psychotic symptoms. Zinc is also effective in boosting the effects of antidepressants. Some possible side effects of zinc supplement intake include diarrhea, headaches, stomach pains, vomiting, loss of appetite, nausea. 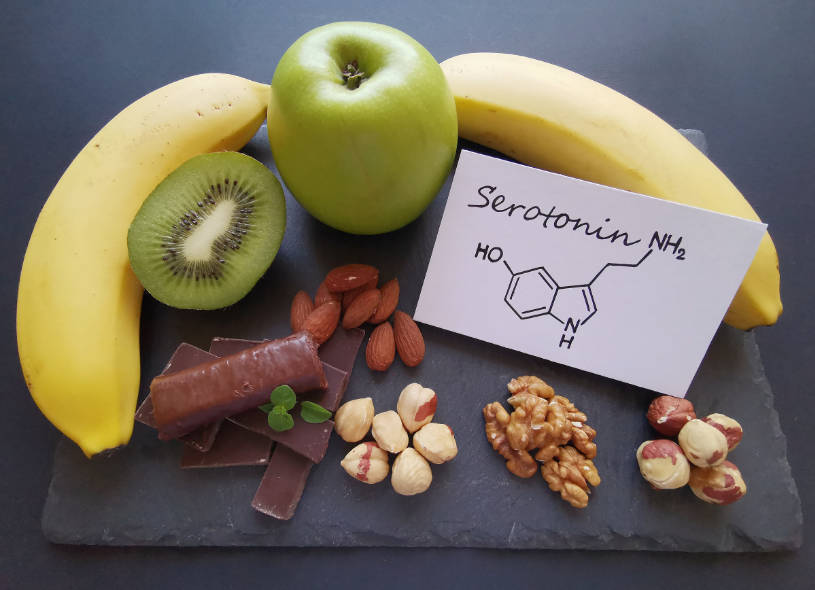 Natural antidepressant supplements have their benefits when it comes to depression, contributing in one way or another to diminish the effects of this medical illness. But what many people do not know is that sometimes supplements can cause more harm than good.

It is highly unrecommended to use natural alternatives to antidepressants without a doctor’s consultation. In the case of developing an addiction, patients should seek proper treatment as soon as possible.

What Can Help Depression besides Medication?

People who don’t like taking drugs or supplements wonder what can help depression besides medication. Fortunately, there are several ways of treating depression without antidepressants. Some of these ways include meditation, physical exercise, a change in diet, and getting more sleep. These methods require constant practice if they are to be effective.

Putting about a half-hour a day of exercise into a daily routine can go a long way to help with depression and antidepressant addiction. A clinical study revealed that Physical exercise helps to lift mood and reduce anxiety, which is a major trigger of depression. Physical exercise doesn’t have to be strenuous or it might be counterproductive. It is advisable to take physical exercise outdoors, as fresh air and sunshine can help to calm the body and fight depression.

A Change in Diet

Eating mood-improving food has been found to be effective at treating the disease. Meals should be well-balanced, have a great aroma, and taste delicious. Patients should get plenty of fresh foods, fish, and nuts that are in omega-3 fats. Also, foods high in probiotics are known to support brain health, thus patients should feed on them to help fight depression.

Another method to help fight the disease instead of using antidepressants OTC is meditation. Depression stems from stress and anxiety so relaxing the body and mind through meditation can support the fight against it. Meditation done in privacy has been shown to be effective in helping with some of its symptoms.

Sleep affects mood, poor sleep results in bad which can trigger depression. Studies show that there is a link between insomnia and depression; this is why medical doctors advise patients to get enough sleep. Sleeping relaxes and relieves the mind and body of stress. To get enough sleep in privacy, patients should declutter both their minds and bedrooms and make the room as dark as possible. They should also avoid screen time before bedtime to ensure a good night’s sleep.

People with major depression should not rely solely on alternatives to antidepressants for depression and anxiety. Often, natural supplements such as 5-HTP, omega 3, folic acid, or SAM-e are not more effective than a placebo in major depression.

Because of this, medical advice is crucial before taking any natural supplements, and professional help is needed for a personalized treatment plan. Also, patients should avoid substituting medical treatment with other methods. Instead, it is advisable to combine both medication and the other methods of treating depression such as sleeping and exercising. Using the other methods without medication can be risky and prove ineffective. Patients should be careful to not overdose on antidepressant drugs as that can be deadly. Combining antidepressants and alcohol can also be deadly. If any signs of abuse are noticed, it is important to contact the rehabilitation center.