It is very common for depressed patients to be on an antidepressant drug. This makes people want to know if it is safe to drink alcohol while on these medications. So, can you drink on antidepressants? To answer this, keep in mind that drugs for depression also interact with many other medications, including over-the-counter drugs, and food, such as alcohol. Based on a study of researchers from Finland, it was reported that alcohol-related causes of death account for 50% and 30% among depressed men and women who use antidepressants, respectively. Because of these statistics, it is safe to say that antidepressant interactions range from mild to severe ones. Thus, these interactions are what the patients should be aware of to keep their health safe.

For individuals battling depression, alcohol is often a way to self-medicate. Some people take the substance as their support, which is extremely dangerous. Using alcohol as a way to deal with problems is so common that 64% of those with alcohol use disorder also have depression. As a result, many individuals in treatment for depression will likely suffer from alcoholism as well. In terms of the antidepressant mechanism of action, these drugs work by inhibiting the reuptake of neurotransmitters through selective receptors. This means that they act in the brain to balance the neurotransmitters in the brain.

On the other hand, alcohol also acts on the brain. Thus, consuming this substance will inhibit the balance of the neurotransmitters in the brain. So, what would happen when one takes antidepressants and alcohol? Can you drink on antidepressants? Based on the study of healthcare professionals from Indiana, when alcohol and antidepressants are mixed, there would be an increased risk of sedation and a sudden drop in blood pressure (orthostatic hypotension).

According to Scientific Information These Five Types Promote Different Effects When Consumed with Alcohol:

People who have major depressive disorder will often withdraw and isolate themselves from society. Once they learn how to get on antidepressant drugs and start to feel their effects, they might want to become more social. This then puts them in a difficult position where drinking might be a part of positive social interaction, but at the same time present a new risk. 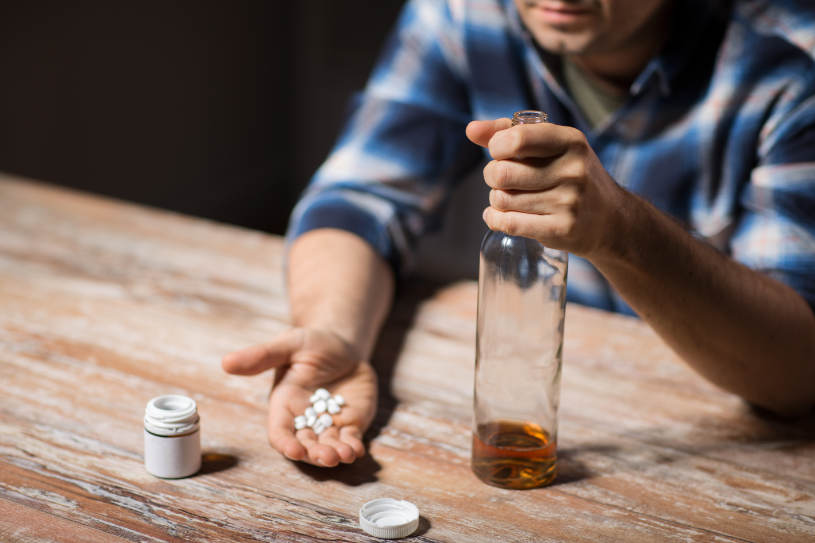 Antidepressants and Alcohol Side Effects

Some of the Adverse Effects of Mixing Antidepressants and Alcohol Include:

Drinking on Antidepressants: When Is It Safe To Drink Again?

Generally, it is highly advised to avoid consuming alcohol and antidepressants or any other medications together to avoid even the smallest drug interactions. Keep in mind that alcohol is a depressant itself. Thus, taking them with an antidepressant counteracts the action of the drug, making it not useful in managing depressive symptoms. Taking alcohol and antidepressants together can waste a patient’s money and doctor’s efforts to improve the mental health of the patient. Aside from these, doctors report that even at a small alcohol dose, intoxication can already be possible. In case of intoxication contact medical services as soon as possible.

Just like any other medication, there are also drug interactions when it comes to drugs for depression. Based on a report of medical doctors, patients with comorbidities and having multiple drug therapy are most at risk of antidepressant drug-drug interactions. Additionally, an antidepressant drug can cause side effects when mixed with stimulants, contraceptives, heart medications, and even the Covid-19 vaccine. These interactions will be discussed in this section.

Those experiencing antidepressant sexual side effects may find them significantly worse. Individuals who are experiencing these signs and symptoms are advised to contact medical professionals and seek support to avoid other health dangers.

Extreme caution is required when a woman is taking antidepressant drugs while pregnant. Trans women who are taking hormonal birth control methods or hormone-based therapies can take antidepressant drugs for postpartum depression. This poses mental and physical health hazards, so when this happens, contact or seek a doctor’s consultation is required.

Sexual dysfunction is a common side effect of depression medications affecting between 30% and 70% of patients. Viagra, taken while under depression treatment, has two benefits:

There is no problem with taking Viagra and depression medications as long as the recommended dose is taken, and the doctor’s advice is followed.

In a study of medical doctors from Belgium, it was reported that those with mental health issues such as depression may experience an increased risk of severe respiratory syndrome mortality and morbidity due to Covid-19. But what happens when these patients get a shot while on antidepressant drugs? What happens when there is a Covid vaccine and antidepressants interaction? As cited in the same study, it was said that the Covid vaccine and antidepressants interaction is beneficial because antidepressant drugs can normalize the vaccination response of 60 years old and above patients with major depression to the vaccine. 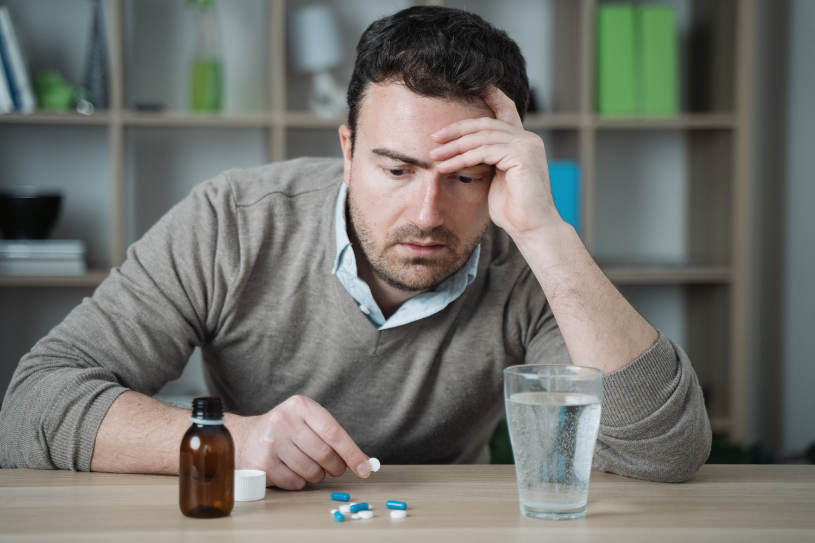 Aside from drugs and alcohol, other substances may also interact with antidepressant drugs. Some of these include illicit substances and hallucinogens like weed, shrooms, and lysergic acid diethylamide (LSD). Generally, just like antidepressant drugs, these substances act on the brain. Thus, mixing them imposes mental health dangers. In this section, information about these dangers will be elaborated on.

The use of weed alone is already dangerous to one’s health, more notably because it causes addiction that can ruin one’s career and relationship. Thus, patients who want to quit their addiction to these substances may consider resources such as rehab centers. Even during this time of the pandemic, addiction during Covid-19 can be resolved with the help and support of professionals.

Shrooms, magic mushrooms, or psychedelic mushrooms contain psilocybin, which is the main psychoactive component. This compound alters specific neurotransmitter systems, the same ones that some depression medications work on. That is why there is a high risk of overstimulating the body. Shrooms also cause the body temperature to intensely fluctuate, from shivering and chills to sweating and flushes. Caution should be taken when it comes to antidepressant drugs and heat intolerance. Some depression medication can affect the body’s temperature regulation, which means the patient will struggle to deal with heat.

LSD affects a series of neurotransmitters, among which serotonin. That is why combining LSD and depression drugs might cause Serotonin syndrome, which occurs when two drugs that increase serotonin levels are taken simultaneously. The condition’s symptoms include delirium, hallucinations, confusion, restlessness, shivering, tremors, irregular heartbeat, flushing, fever, hypertension, diarrhea, and tearing of the eyes, among others. The condition can be lethal.

Interactions Of Antidepressants And Food

There are also some food interactions that patients taking depression medications should be aware of. Although this does not apply to people taking natural antidepressant foods. Nonetheless, for this, pharmacists and medical doctors are highly encouraged to provide proper medication counseling to patients to avoid dangerous food-drug interactions.

The use of grapefruit and antidepressant drugs should be avoided because the fruit contains furanocoumarins, a chemical that interferes with the drugs’ metabolism by affecting the enzymes which break down depression medications. This means that the drugs are not broken down properly, and even a safe dose can be dangerous. Therefore, a drug will linger in the system more than it is intended with the usual dose. If the depression medications are being absorbed too fast, without being properly broken down, it can lead to side effects such as nausea, dizziness, or even an overdose. 200 ml of grapefruit juice or a whole grapefruit is enough to boost the concentration of the drugs and cause side effects.

The food a patient eats can affect the pharmacokinetic properties of the drug: absorption, distribution, metabolism, and excretion. When these properties are altered, the function and activity of the drug change. Furthermore, another food interaction to note is caffeine and antidepressant drugs. Based on the study of pharmacists from Ethiopia, caffeine slows down the metabolism of antidepressant drugs. Thus, caffeine can make the heartbeat irregular and increase blood pressure in patients taking MAOI treatment. Caffeine can also cause restlessness and increase anxiety in patients under SSRI medication and decrease the effectiveness of TCAs.

Antidepressant interactions can result in serious and even life-threatening side effects or diminish the medication efficacy, leading to an overdose. While many wonder what happens if one takes too many antidepressants, the issue of interactions is important, too. If someone is misusing alcohol or antidepressants, they need professional help and support. Drug and alcohol rehabilitation centers can help users identify the root cause of their antidepressant addiction and develop strategies that prevent them from using it in the future. Furthermore, stopping antidepressants cold turkey can also be problematic, so with centers all across the country, the right treatment option can always be found.

Before being prescribed depression medications, the patient should let the doctor know about any other drugs that they are currently taking to prevent possible interactions. Some interactions may lead to accidental drug abuse and addiction in the future if no actions are taken. That’s why it is critical to contact the drug rehabilitation centers as soon as any of the signs of abuse are noticed. There, the patients can get the best substance abuse treatment possible with long-lasting effects.