Available information indicates that out of every 10 Americans age 12 and over, one is on antidepressant drugs. However, it doesn’t end there. The same findings show that 60% of people taking these drugs have done so for at least 2 years with 14% using these drugs for about 10 years. These medications can cause dependence and lead to antidepressant overdose and addiction which, in turn, can cause antidepressant withdrawal symptoms. These symptoms can be deadly which is why many of the users are getting off antidepressants. However, antidepressant withdrawal is associated with health problems (including depression) if not done properly. Thus, the decision to stop taking these drugs should be made only with the support of a specialist to avoid risking a recurrence. Once the patient decides to stop, the physician will create a personalized plan to minimize or prevent the withdrawal symptoms that can occur if the treatment is stopped too quickly.

This article will discuss what happens to the body during antidepressant withdrawal and how to go about safely getting off antidepressants.

What Happens To Your Body When You’re Stopping Antidepressants?

Antidepressant withdrawal, also known as antidepressant discontinuation syndrome, is defined by the side effects experienced by some patients who suddenly stop the treatment for depression. Studies show that almost 20% of patients will develop the syndrome after abruptly stopping the treatment. Though its exact cause is still being studied, scientists believe that antidepressant discontinuation syndrome is caused when the levels of antidepressants in the brain reduces. When the serotonin levels in the brain drop, it takes time for the body to adjust and this can lead to withdrawal symptoms.

The withdrawal symptoms can appear a few days after the treatment is stopped. No one can predict if the patient will experience withdrawal signs, and scientists cannot tell exactly why some people experience them while others do not.

The Most Common Withdrawal Side Effects Are Similar to Those of Flu:

Some people might also experience what is called brain zaps, a sensation similar to an electric shock in the brain, making people, especially teenagers, prone to suicidal thoughts and actions. If the symptoms are severe, the doctor might decide to reintroduce another antidepressant and reduce it more slowly to better manage the symptoms.

Other Possible Antidepressant Withdrawal Symptoms Include: 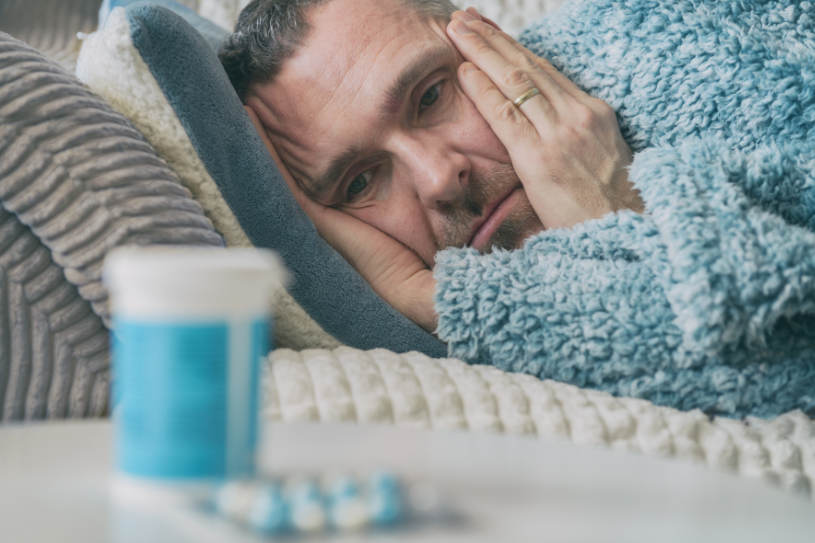 Coming Off Antidepressants: Which Are Harder To Stop?

Although all depression medication comes with the risk of discontinuation symptoms, some drugs are considered harder to stop. These drugs have a short half-life, which means they break down and leave the system quickly. On the other hand, drugs with a long release leave the body slowly, causing fewer problems when stopping the treatment.

Some of the Drugs That Are Harder To Stop Are:

Each person has a different withdrawal timeline when going off antidepressants, which depends on the severity of the discontinuation syndrome, the antidepressant used, the period of the treatment if the antidepressant was combined with other drugs, the patient’s psychiatric and medical history, and other factors.

However, the common withdrawal timeline is as follows:

The patient might be diagnosed with discontinuation syndrome if symptoms appear days after stopping the treatment, and if the side effects go away when the depression treatment is started again. Depending on the types of antidepressant medications the patient is on, the symptoms vary in intensity and duration. That is why anyone deciding on stopping the depression treatment should address a doctor who will know how to do this process safely or contact a rehab facility and apply for a treatment program.

There are two ways of stopping antidepressants each with its advantages and disadvantages. Stopping cold turkey is when one quits taking the medication abruptly which can lead to severe health implications. Tapering off, on the other hand, aims to avoid or minimize the effects of getting off antidepressants by gradually lowering the dose to ultimately quit taking the drugs. However, the best method recommended by health professionals is the tapering off routine.

When tapering off these drugs, the severe withdrawal symptoms will be avoided, as the brain gradually adapts to the lower dose and the subsequent chemical changes. Some doctors also advise patients to use mood calendars while stopping antidepressants to record their mood every day and write any side effects they might experience.

Also, patients should avoid alcohol while quitting the medications since mixing antidepressants and alcohol is dangerous. Sometimes the patient might also need other medicines to address insomnia or nausea, for example, or the treatment could be switched from a short-acting drug to a long-acting one. Patients must strictly obey the tapering off plan if they want to enjoy the benefits of getting off antidepressants.

How To Manage Withdrawal Safely

The first step in managing withdrawal safely is acknowledging the possibility of such side effects. A doctor can properly inform the patient on how to get off antidepressants to minimize the chance of experiencing them. This way, the patient can prepare for them and even take time off for a couple of days if the withdrawal symptoms are severe. Side effects, such as disrupted sleep, tiredness, and irritation, can make everyday activities more difficult.

Sometimes, it is difficult to distinguish relapse from discontinuation symptoms, that is why it is crucial to seek medical help before deciding on weaning off antidepressants.

Quitting antidepressants should not be done without a doctor’s supervision.

How Long After Stopping Antidepressants Before You Feel Normal Again

Going Back on Antidepressants After Stopping

Going back on antidepressants after stopping is possible when symptoms of depression and anxiety rear their heads months or years after treatment and recovery. According to available information, this happens to around 20% of people who have recovered.

Signs of Going Back on Antidepressants After Stopping Include:

Some of these side effects may also be present when medications are switched. Symptoms may differ from one person to the other and may even lead to suicide attempts. Thus, people need to note what triggers the depressive episodes and take steps to avoid them. Also, patients are advised to stick to treatment plans to avoid going back on antidepressants after stopping. Patients can share information on their health with their doctors to help doctors track the signs of anxiety and depression and take appropriate steps.

Always Consult With Your Doctor Before Stopping

There are lots of benefits of getting off antidepressants like antidepressant weight reduction and getting rid of antidepressants adverse effects. However, not knowing how to wean off antidepressants can make this process more challenging than expected. This is because weaning off the regular use of an antidepressant medication could result in symptoms like nausea, diarrhea, chills, headaches, strange sensations, etc. That is why getting professional help during withdrawal is of utmost importance. The doctor may prescribe a tapering off method which may take like weeks or months, depending on the severity of the symptoms. Patients can also try natural antidepressants like Omega 3 Fatty foods, saffron, and folate.

Patients are reminded to stick to the use of the treatment plan if they are to enjoy the benefits of getting off antidepressants. In some cases, patients need the help of drug rehab centers to come off the drugs safely and to cope with the emotional, mental, and physical imbalance caused by this change.