How Long Does Methadone Stay in The System?

The half-life of methadone is 8-59 hours, which means that one might need between 1.83 and 13.52 days to get the drug out of their system.
Many factors can affect the duration and the elimination of the drug. Dosage, age, body mass, metabolic rates, and diet are among the variables that affect methadone and its effects.

How Long Does Methadone Stay in System?

Methadone is a potent synthetic opioid, which doctors only use in various maintenance programs. At the same time, the drug is easy to abuse due to its recreational properties. It’s important to know how long the drug stays in the system as many users get hooked on it hoping to get clean from other opiates. Many deal with its painful withdrawal symptoms and thousands of addicted women use it during pregnancy.
Usually, users can feel the effects of methadone within eight hours. However, its full effects do not begin for about 3-5 days of treatment.
The drug has a half-life of 8-59 hours, which means that one will need between 2 and 14 days to get clean.

How Long Does Methadone Stay in Blood?

Methadone is very powerful, and peak plasma concentrations occur within four hours. However, the drug is still in the blood even 30 minutes after intake and up to a few days.

How Long Does Methadone Stay in Saliva?

Oral samples also can detect methadone, and just like blood tests, they can detect the drug in 30 minutes and up to a few days after ingestion.

How Long Does Methadone Stay in Hair?

Although it takes some time for methadone to accumulate in hair segments, professionals can detect regular use via hair tests, with a detection window of up to 90 days.

How Long Does Methadone Stay In Urine?

As the drug excretes through urine, urinalysis is the most preferred method for the detection of methadone. Usually, the drug can remain in one’s urine between two and four days.

As stated above, the range of methadone half-life is broad. That’s because many factors affect the duration and the elimination of the drug. 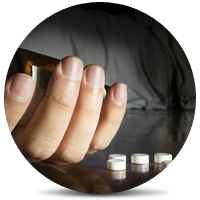 It’s important to say that pregnant women can clear their system quicker than non-pregnant. Information on the topic is vital as many addicted pregnant women use methadone during pregnancy.

How Is Methadone Metabolized?

Like other substances, the drug undergoes liver metabolism. Multiple enzymes are involved in the process. Most of the drug eliminates through urine and small amounts through sweat and feces.

Various tests can be used to detect methadone.
Urine tests are among the most reliable techniques to detect the drug, for up to 2-4 days. The cut-off levels are at 300ng/mL. Some people claim that the drug can be detectable for up to two weeks after intake.
Blood tests are not so standard when it comes to methadone detection. Still, they can detect the drug as soon as 30 minutes for up to few days.
Swab tests have similar detection times, but unlike blood tests, they are noninvasive and quick.
Hair tests can also detect Methadone. With time, methadone accumulates in hair samples. Note that hair tests provide a long window of detection, up to 90 days.