Painkillers and Alcohol Together: Is It Safe?

Learn About Mixing Painkillers With Alcohol:

Taking over-the-counter painkillers with alcoholic drinks, when rarely done may not lead to serious complications. However, if alcohol is taken in huge quantity, this could eventually lead to serious health issues. Aspirin, ibuprofen, naproxen, and acetaminophen are common painkillers that are sold without a prescription and may cause severe side effects when mixed with alcoholic beverages in a large quantity.

Over-the-counter painkillers and alcohol mixing cause following side effects:

The body’s reaction to mixing pain meds and alcoholic beverages is different in every individual. Some experienced mild side effects, while others experienced fatal complications.

It is always important to ask a doctor about the possible effects of mixing OTC pain medication with an alcoholic beverage.

Prescription pain medications are more potent than over-the-counter pain meds, and mixing prescription painkillers with alcohol could result in more serious health implications. Some people purposely mix pain medications with alcoholic drinks with the hope that it will make the pain go away in just a short period of time. However, mixing them can lead to serious health issues which include but are not limited to the following: 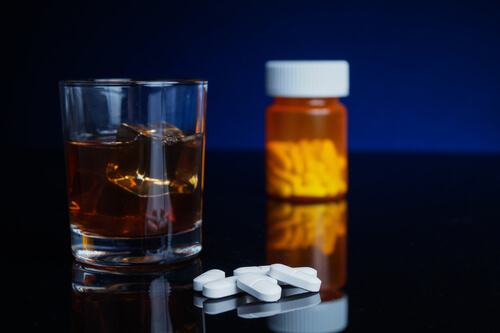 What Pain Meds Are Safe To Take With Alcohol?

What painkillers can one take with alcohol? It is best to talk to a doctor or pharmacist to know what type of painkiller can be taken with wine and other alcoholic beverages. A moderate amount of alcohol and pain medications like acetaminophen, ibuprofen, and aspirin generally has fewer side effects. These OTC medications are the only painkillers that can be mixed with alcohol without severe complications. According to the FDA data, it’s recommended to take no more than 3 alcoholic drinks per day if one takes  acetaminophen-containing drugs.

However, it is strongly recommended to get advice from experts such as doctors and pharmacists about the recommended limit for drinking alcohol with painkillers mentioned above.

Painkillers safe with alcohol like acetaminophen with correct dosage have less serious health implications than prescription pain medications, but the safety isn’t that much established, especially for older, younger, and pregnant patients.

Some people may even mix alcoholic beverages with weed and painkillers in order to get high or when prescribed pain meds don’t work. However, it’s very dangerous and may lead to side effects, overdose, and addiction development, this must be avoided.

How Much Time Should Pass After Taking Painkillers To Drink Alcohol?

How long after taking painkillers can one drink alcohol? Alcoholic drinks and drugs are filtered from the body through the liver. The most suitable time to drink alcoholic beverages is when the liver has already excreted the drug and vice versa. It is important to note that the ability of the body to process alcohol and drugs varies from one person to another. For immediate-release pain medications, the individual needs to wait for at least four to six hours before taking alcohol. For extended-release pain meds, the patient needs to wait for at least 8 to 12 hours before drinking alcoholic beverages. 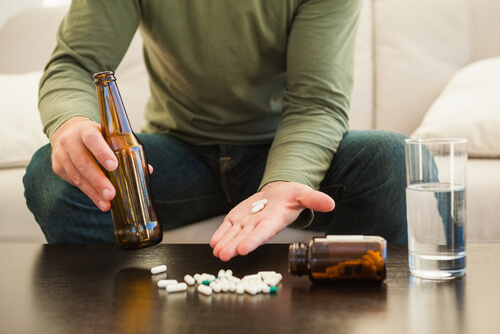 Pregnant women should consult a doctor to find a safe pain medication during pregnancy, and avoid all kinds of alcoholic drinks.

Getting Help After Mixing Painkillers With Alcohol

Alcohol when drinking moderately may not cause significant harm to the body, but painkillers and alcohol combination can be detrimental to one’s health. If it happens, the patient should stop taking painkillers and alcoholic beverage and consult a doctor immediately. Sometimes the headache that does not respond to painkillers may be a reason of frequent alcohol consumption. In this case, stopping drinking alcohol will be a primary solution.

If negative symptoms occur after taking painkillers along with alcohol, it’s essential to visit a doctor as soon as possible. Most likely, it will be necessary to undergo follow-up and pass tests. If the symptoms are very severe, call an ambulance immediately.

If anybody is habituated in drinking alcoholic beverages and also need painkillers, it is crucial for the person to know how to find a doctor who will prescribe pain medication and give  consultation about mixing them with alcohol. The doctor may also help to find alternative painkillers to minimize the risks if one wants to allow oneself a few alcoholic drinks during the celebration.

Nowadays it’s as easy to buy any painkillers online or from the pharmacy, as to buy alcohol in the shop, which led to a significant increase of the abuse of these substances among american population. This also increases the risks of more severe addiction development, as it is often difficult to control the use of one substance if the person is already under the influence of another. Once the patient develops an addiction, a sudden stop could lead to the development of symptoms of withdrawal from painkillers, which are even more difficult to tolerate due to exposure to alcohol. Mixing of painkillers and alcohol can cause liver damage, stomach upset, bleeding, ulcers, etc., so the patient should not delay getting medical treatment. Hence, it is of utmost importance to seek immediate addiction treatment. There are many rehab facilities in the U.S. that treat and manage addiction.