Celexa Side Effects: The Adverse Drug Reactions Of Citalopram

Citalopram, marketed as Celexa, is an antidepressant belonging to the group of Selective Serotonin Reuptake Inhibitors (SSRI). Selective Serotonin Inhibitors (SSRIs) first appeared on the pharmaceutical market during the 1970s and Celexa was approved for use in 1998. These drugs were developed with the hopes of being a “magic bullet” that would solve the problem of intolerable side effects associated with older antidepressant drugs such as Tricyclic Antidepressants (TCAs) and Monoamine Oxidase Inhibitors (MAOIs) by substituting them for the treatment of depression. This was true for the most part, as SSRIs were highly receptor-selective for Serotonin and did not affect other receptor systems like their predecessors, as a result having much fewer side effects without minimizing their efficacy. This lead to the ever-increasing rise in the use of SSRIs, including Citalopram, for depression as well as for other conditions such as alcohol use disorder, coronary arteriosclerosis, obsessive-compulsive disorder, panic disorder, postmenopausal flushing, and premenstrual dysphoric disorder. With Citalopram taking place among the top 30 drugs prescribed in the last few decades. However, with increased and continued use, more Celexa side effects and questions about safety and tolerability arose. This article will discuss these side effects of Celexa, as well as provide information about those special topics, concerns, and precautions that individuals should be aware of before taking Celexa. 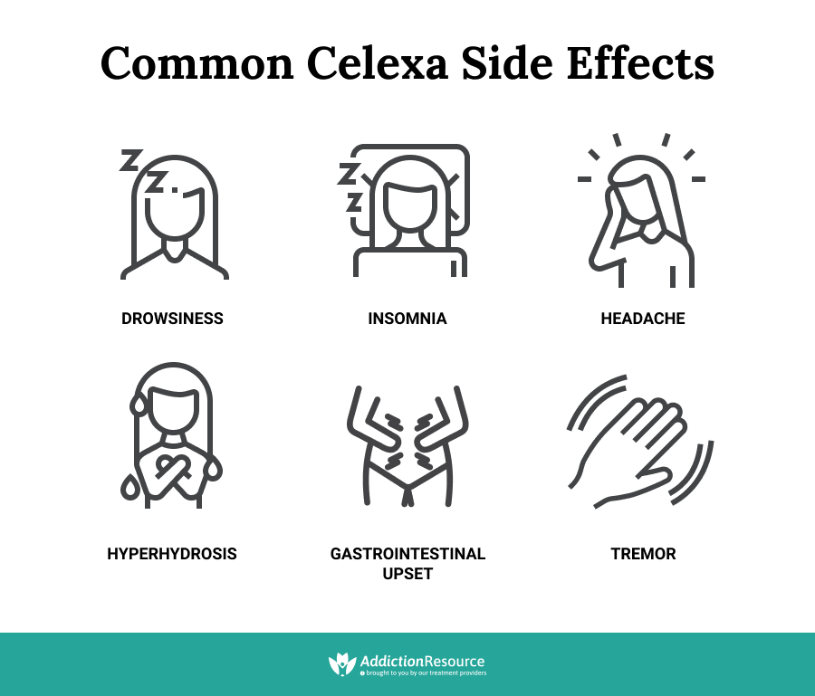 Factors that Impact the Development of Celexa Side Effects

Celexa side effects are defined as undesirable effects that are associated with its use that may occur as a part of its therapeutic action or may be unpredictable/idiosyncratic in their occurrence. Furthermore, side effects of Celexa are multifactorial in origin, meaning that various different factors both intrinsic and extrinsic may affect their development.

Below are offered some of the factors that could impact the development of Celexa side effects:

These are just a few of the numerous factors that can impact the development of Celexa side effects.  Numerous other complex factors such as dose, drug formulation, route of administration, and drug-drug interactions due to polypharmacy all play important roles. As such, it is important to consult a medical doctor for information about individual factors that one may possess that may predispose them to the development of various Citalopram-associated adverse reactions.

What are the Side Effects of Celexa?

Citalopram is a Selective Serotonin Inhibitor (SSRI) as already mentioned. This means that it selectively targets seven classes of Serotonergic receptors and sub-receptors. These receptors govern not only functions related to mood, which is important for the treatment of depression, but also functions relating to anxiety, sleep, appetite, sexual function, pain, and nausea. It is interactions with these receptors that cause the side effects of Celexa.

The most frequently(≥5%) encountered Celexa side effects related to its Serotonergic effects include:

Less frequent( ≥2%), yet more serious and possibly life-threatening reactions could include:

In addition to the adverse effects mentioned above, there can be a vast array of other rare adverse reactions based on information from users in various post-marketing studies. However, it is important to remember that these can be brought on by numerous other factors and there has not been a causal relationship established between Citalopram use and their emergence.

One more factor that warrants a mention, includes the dose-dependent quality of Celexa Side Effects. What this refers to in simple terms is “taking a higher dose will result in a greater degree and/or frequency of adverse drug reactions experienced.” For example, adverse reactions of 20mg Citalopram may be more commonly encountered or may be more severe than that of 10mg Citalopram. As such, if a patient is experiencing adverse effects, they may just need their dose adjusted by a doctor.

There is not much that can be done to “prevent” the development of side effects, as they are an unfortunate consequence of treatment. However, taking the medication as exactly as directed and taking certain steps to mitigate the developed adverse effects can certainly help.

Long-Term Effects of Celexa Use

Not much is known about the long term effects of Celexa Use. One study at the University of Auckland, New Zealand evaluated patients’ views and experiences of long-term antidepressant treatment. Although the majority of patients involved reported that antidepressants helped reduce depression and improved their quality of life, they also reported long-term adverse effects. These included:

There is still much that remains unknown about the long-term effects of Celexa use. Therefore it is important to screen for such effects with regular health status monitoring and frequent discussions of any new concerns with the prescribing doctor. 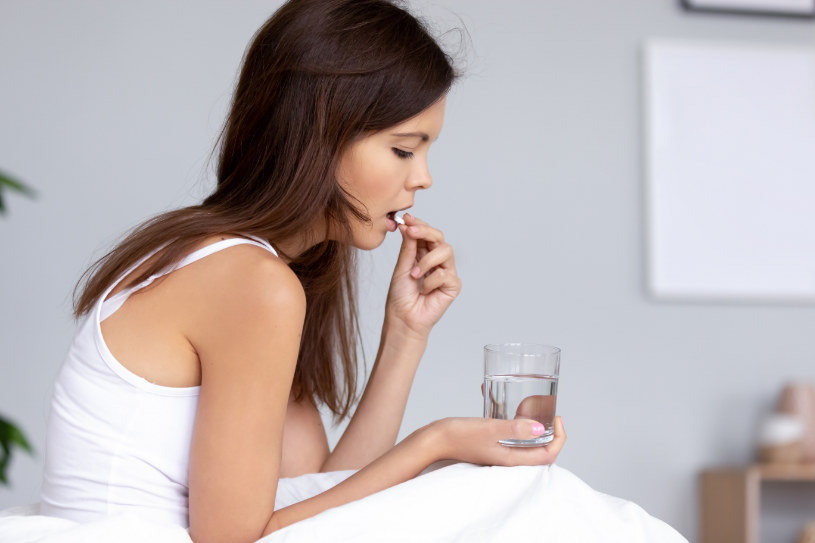 Sexual dysfunction is among the most commonly reported adverse effects of antidepressant use. This is especially true with Citalopram use. Sexual dysfunction is a very complex and delicate subject. As such self-reporting of this particular issue has an incidence of 2-7%. However, when individuals were evaluated with a questionnaire, the prevalence of associated SSRI and Celexa sexual side effects rose to as high as 70-90%.

Furthermore, the sexual act is very complex and comprises five successive stages: Desire, Excitement, Plateau, Orgasm, and Resolution. Each of these is regulated by a complex interaction between neurotransmitters, hormones, and peptides. A dysfunction is produced when an alteration in these regulating factors occurs. Such alterations are produced both during depression as well as during its treatment with antidepressants. Therefore symptoms of sexual dysfunction can occur with untreated depression and during treatment with antidepressants, making it quite difficult to determine their exact cause.

Celexa sexual side effects can manifest as any dysfunction in any of the five aforementioned stages of the sexual response cycle. However:

Celexa sexual side effects whether it be related to Celexa sex drive or anorgasmia can be quite distressing to individuals. So much so that it may lead to the discontinuation of antidepressant therapy. This can be detrimental to the individual’s mental and physical health. It is vital that doctors pay careful attention and promote open discussion with individuals who may be experiencing sexual dysfunction as a result of Celexa use. In certain cases, treatment options such as watching and waiting, dosage alterations, additional drugs, or switching to a different agent may be available that can help alleviate the symptoms of sexual dysfunction.

Celexa is currently listed as a Category C drug. This denotes the fact that animal reproduction studies have shown an adverse effect on the fetus, but there are no adequate and well-controlled studies in humans. However, doctors can use Celexa during pregnancy if the mental health benefits of its use outweigh the potential risk to the fetus, a decision that should be made on a case-by-case basis.

There are, however, several associated dangers of SSRI use during pregnancy.

Due to the risks, the use of Celexa during pregnancy is not recommended. However, pregnant women must work closely with their doctor while doing so as the effects of stopping Celexa can also harm the baby.

As with most drugs Citalopram is excreted in small quantities in breast milk, but no effects other than somnolence, decreased weight gain, and poor feeding have been reported. The decision regarding the use of Celexa while breastfeeding should be made by a doctor who will take into account the various risks associations and weigh them against the health benefits.

One more factor that warrants a mention, includes the dose-dependent quality of Celexa Side Effects. What this refers to in simple terms is “taking a higher dose will result in a greater degree and/or frequency of adverse drug reactions experienced.”

How Long Do Celexa Side Effects Last?

The onset of the therapeutic action for depression will take about one to four weeks from the initiation of treatment, but the full response may take as long as eight to twelve weeks.

The half-life of Citalopram on average is 35 hours. However, the duration of half-life can almost double if Citalopram is used in patients with hepatic and/or renal impairment, and elderly patients over the age of 60.

The complete elimination of Citalopram and/or its metabolites from the body(Blood, Urine, Hair) can take up to two weeks.

The following are the main contraindications to use and warning that individuals should be aware of before starting Citalopram:

These are some of the major contraindications and warnings regarding Citalopram use. As always there can be others, as such, it is advised to disclose all medical conditions as well as all medications taken in the last six months to the prescribing doctor for evaluation of the risk of developing other complications. 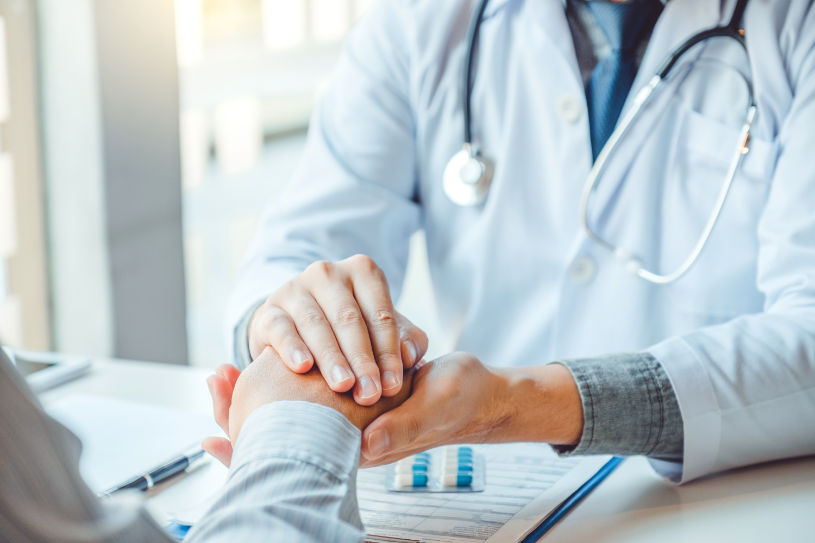 Preventing Celexa Side Effects And Getting Help

There is not much that can be done to “prevent” the development of side effects, as they are an unfortunate consequence of treatment. However, taking the medication as exactly as directed and taking certain steps to mitigate the developed adverse effects can certainly help. Certain steps such as chewing sugar-free gum can stimulate salivation and help with dry mouth, nausea can be alleviated by staying hydrated and consuming small meals at more frequent intervals. Also, it is of paramount importance to never stop taking or alter the dose of Citalopram without first consulting a doctor. Abrupt discontinuation of Citalopram can be dangerous and may lead to the development of discontinuation syndrome.

If individuals decide that they wish to discontinue the use of Citalopram due to intolerable adverse effects, or possible weight gain, rehabilitation centers can help users stop the drug safely through a guided tapering schedule which will avoid and manage withdrawal symptoms associated with Celexa discontinuation.

Does Celexa Cause Weight Gain?

The phenomenon of Celexa weight gain is complex. Alterations in weight, both gain, and loss, can be experienced differently by different patients. Generally, some patients may experience initial weight gain which some attribute to the regaining of lost weight during depression. To find out more, read the section on Celexa weight gain.

Does Celexa Make You Lose Weight?

Does Celexa Make You Sleepy?

As mentioned above, one of the common side effects of Citalopram is drowsiness and somnolence. So yes, it has the ability to make a user sleepy.

Does Celexa Cause Hair Loss?

In rare circumstances, SSRIs can cause what is known as “Drug-induced Alopecia”, which can be manifested with diffuse hair thinning on the scalp. If recognized early and treatment discontinued the hair loss is reversible and the lost hair will regrow.

Does Celexa Cause Headaches?

Headaches, particularly migraine headaches, have been reported as a frequent side effect of Citalopram use in post-marketing studies. Their frequency is around 1/100 users.