Addiction Resource » Drugs of Abuse » Celexa » How Long Does Celexa Stay in Your System?

Celexa Half-Life: How Long Does Celexa Stay in Your System

Celexa is an antidepressant classified as an SSRI (selective serotonin reuptake inhibitor). It is among those drugs that stay in the system for an extended amount of time. Celexa half-life is a lengthy 35 hours in healthy people, and longer when it comes to other population subgroups. For instance, Celexa half-life ranges from 45.5 to 52.5 hours for older individuals (60+ years of age) depending on whether they take a single dose or multiple doses, respectively. This antidepressant stays even longer in individuals with reduced hepatic function as studies have found that Celexa half-life doubles for them.

Citalopram is known to interact with over 600 drugs, with some interactions being a potential contributor to the severity of side effects one may experience. Before combining it with other drugs, read up and gather as much information about how they’d interact. It’s also important to monitor patients under Citalopram treatment for symptoms so as to be able to seek medical help early on. Seizures, suicidal thinking/behavior, and serotonin syndrome are some of the serious side effects to watch out for. Meanwhile, symptoms such as nausea, sleepiness, and decreased appetite (eventually weight loss) are quite common and usually not something to be worried about. Still, do call the doctor if they do not go away. Do that, too, if one is suspected of Citalopram overdose, addiction, or abuse. 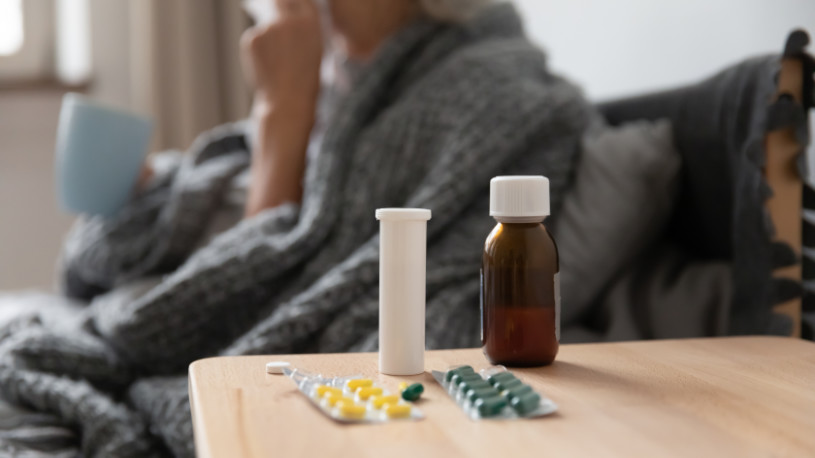 Celexa half-life is approximately 35 hours, and the concentration of Citalopram in the body falls below 1% in approximately 8 days. The feelings when Celexa wears off may sometimes be unpleasant. While discontinuation syndrome is usually seen in drugs (particularly in SSRIs) with short half-lives, it is also one of Citalopram hydrobromide side effects. It can manifest in a sudden relapse of depression or anxiety, as well as possible flu-like symptoms, fatigue, restlessness, insomnia, and difficulty concentrating.

How Long Does Celexa Stay In Your System?

The period during which Citalopram stays in one’s system is mostly determined by its half-life, but again, individual factors also play a role here. On average, it leaves the body within 10-14 days after the last dose was taken. It does not mean, however, that Citalopram is removed from hair, blood, urine, and saliva at the same rate. The remnants of the drug can stay in hair follicles and urine for a long time after the effects of the medication cease. Hence, Citalopram can still be detected by specific means after it’s cleared from the blood circulatory system.

How Long Does Celexa Stay In Blood?

Peak blood levels are usually reached in about 4 hours after ingestion. Traces of Celexa can be detected in the circulatory system from 4 to 5 days after the last dose was taken.

How Long Does Celexa Stay In Urine?

Up to 50% of Citalopram may be detected in the urinary tract system in 9-10 days following the last dose. If an individual is preparing for a drug screening and is anxious about it, they can let the person performing the test know about Celexa treatment just to be sure.

How Long Does Celexa Stay In Saliva?

Celexa can be detected in saliva for approximately 8 days after the ingestion of the last tablet.

How Long Does Celexa Stay In Hair?

Hair growth is powered by blood, and it is natural that hair follicles absorb any substances that are present in the bloodstream. Most medications can stay in the hair for up to 90 days. 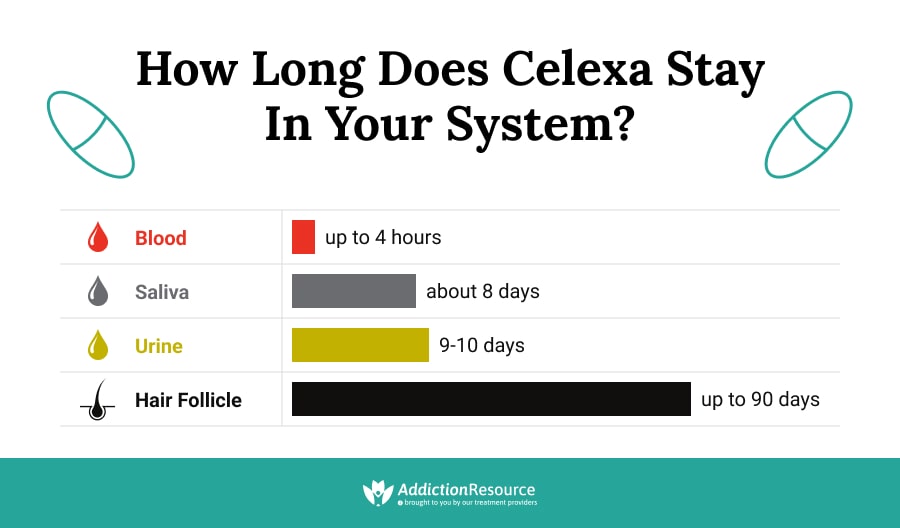 Celexa Mechanism of Action: How Does It Work?

Celexa mechanism of action is closely related to serotonergic activity in the central nervous system. It is used for the treatment of depression and related health conditions. Thanks to its mechanism of action and effects, Citalopram also can be used for pain, sleep, OCD, and other behavioral disorders. But how does Celexa work, exactly? Well, it is critical to note that being an SSRI, Citalopram influences serotonin uptake levels in the brain. Since serotonin plays a major role in many aspects of living, Celexa is also used for the treatment of panic attacks aside from being a depression medication.

Coming as a tablet meant for oral administration, Citalopram is absorbed in the gastrointestinal tract. Normally, a single dose is rapidly absorbed in one’s system. However, despite its fast distribution throughout the body, Citalopram has a rather poor penetration power to pass the blood-brain barrier. Going back to the question “how does Celexa work?”, nearly its entire metabolism process takes place in the liver.

How Long Does It Take for Celexa to Work?

Citalopram reaches peak blood concentrations at about 4 hours following oral administration. Steady-state plasma concentrations are then achieved after about a week of taking a single dose each day, and some may start to see noticeable results after just a week. It could take up to 4 weeks for some to notice the drug’s beneficial effects, though, and it’s also possible that some patients would not respond to Citalopram. So, while there is not really a definite answer to the question “how long does it take for Celexa to work?” that would apply to everyone (because there are individual influencing factors), 1 to 4 weeks is a good reference point.

This time span depends on the condition Citalopram is used for. As such, sleep- and appetite-related conditions can show improvements in the first two weeks, resulting in the fact that Celexa may cause some weight gain. However, using Celexa for pain, anxiety, OCD, and other behavioral problems can take up to eight weeks to see improvement. Studies have also found that patients who respond to this antidepressant during that initial period have a decreased risk of experiencing a relapse over the following few months of treatment.

Being an SSRI, Citalopram influences serotonin uptake levels in the brain. Since serotonin plays a major role in many aspects of living, Celexa is also used for the treatment of panic attacks aside from being a depression medication. 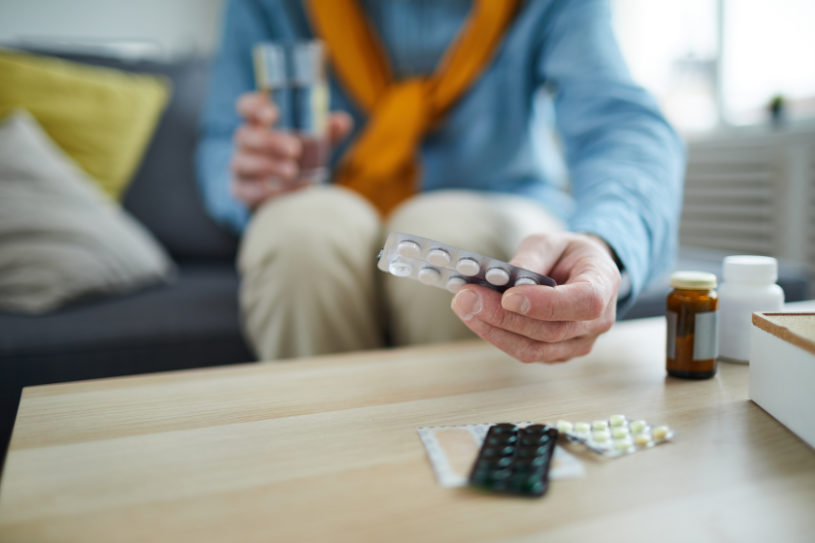 Citalopram stays in the body for approximately 7 to 10 days after the last dose was taken. According to a Harvard study, it takes roughly 7.3 days for Celexa to be 99% out of the body. The main contributor to it is citalopram half-life of 35 hours. Its half-life is merely one of many factors that affect how long it takes before Celexa leaves one’s system, as the elimination is also affected by the individual’s age, weight, lifestyle, dosage, etc.

Aging affects drug absorption, distribution, and elimination. Old age is associated with a decrease in all organs’ function, and this includes decreased renal functions and poorer hepatic function as both the liver volume and blood flow are reduced. As mentioned, the liver is where most of Celexa’s metabolism process takes place. That said, older age generally increases the time Citalopram stays in the body.

Sex can also influence the pharmacodynamics of depression medications such as Citalopram. Generally, women respond better to depression medications under the SSRI class, and hence typically require a bit less of Citalopram dosage than men. Glomerular filtration rate (GFR) is an influencing factor, too. This is usually higher in men, and a higher GFR means a faster elimination rate. Although there would certainly be slight variations in drug elimination rates between men and women, it’s hard to tell how much different elimination rates would be, but both of these factors would be of influence

How long does Celexa stay in your system if you have underlying medical conditions? One’s hepatic and renal function are the main factors that influence Celexa’s elimination rate. Celexa half-life being doubled in patients with poor hepatic function suggests that the elimination rate would be 2 times (or more) slower. On the other hand, there is currently no information available about how renal impairment affects Citalopram’s elimination. It is known, however, that the drug’s oral clearance is lower by 17% for them compared to healthy patients, which is suggestive of a prolonged elimination.

The Frequency/Duration Of Drug Administration

Patients who take Celexa more often and for a longer period of time may see prolonged elimination times. One factor that affects this is the accumulation/steady-state plasma concentrations. For instance, the accumulation of the drug in plasma for a multiple-dose patient (at steady state) is estimated to be 2.5 times the concentration of a single-dose patient. Also, a patient who takes the drug infrequently is more likely to have a faster elimination pace compared to frequent users.

Patients taking high doses of Celexa will have a slower elimination rate compared to those taking lower doses. The last dose of the drug that one takes also significantly influences how long it stays in the system. In general, a lower last dose makes for a faster elimination time.

Different drugs will affect the removal of Celexa differently, and it would be better to consult a health professional for concerns regarding this. However, since Citalopram is primarily metabolized by the CYP2C19 enzyme, drugs that are potent inhibitors of the said enzyme may slow its elimination. It’s important to note, though, that the drug’s elimination rate is unlikely to be affected significantly.

Does Celexa Show Up On A Drug Test?

Technically, Celexa can be detected. Factually, however, drug tests are performed to find specific substances in the person’s system as antidepressant medications are normally not included in that list. It means that additional tests would be required to identify specific antidepressants. False-positive results occur when the chemical structure of a prescription medicine matches that of an illicit or controlled substance. Citalopram can cause a false-positive drug test result for amphetamine, although the risk is much lower than it is with other depression medications like Wellbutrin and Prozac.

Celexa Detox And Getting Celexa Out Of The System Safely

While it’s easy to understand a patient’s nervousness, it is crucial to avoid quitting this antidepressant without medical supervision. Patients’ health must be closely observed for symptoms associated with withdrawal when discontinuing treatment. When discontinuing, it is recommended to gradually decrease the dose rather than abruptly stopping the treatment. If symptoms increase in severity and become intolerable, the doctor may continue with the dose reduction, adjusting it at a more gradual rate, or switch to another medication.  Again, all adjustments of drug use should be under close medical supervision. The same refers to drug abuse and its treatment. Only professional rehabilitation centers can effectively facilitate the recovery process.