Paxil Half Life: Does Paroxetine Show Up On Drug Tests?

Also known as Paxil drug, Paroxetine is a selective serotonin-reuptake inhibitors (SSRIs) widely used for the treatment of post-traumatic stress disorder, panic attacks, social phobia, generalized anxiety disorder, and premenstrual dysphoric disorders. With Paxil half life being about 21 to 24 hours, it can remain in the body for as long as five days for patients with an accommodating system. Those whose body system can’t tolerate it for a long time would house it for 1-3 days, which is the average elimination period. Traces of Paroxetine can be detected in urine, blood, hair, and saliva within a few hours of use.

Further in this article, Paxil half life, metabolism, and safe removal of Paroxetine in one’s system will be discussed.

How Does Paxil Work?

Two of the most commonly asked questions about Paroxetine are “How does Paxil work?” and “What does Paxil do?”. Simply put, it helps in restoring the balance of serotonin in the brain and other neurotransmitters that nerves use to communicate. It prevents the reuptake of serotonin – helping restore its balance in the brain – maintaining mental balance. This essentially means that there will be more of this neurotransmitter to attach to receptors in the brain, which, as a result, may improve one’s mood, sleep, energy level, appetite, and even restore their interest in their daily lives. The reuptake process also removes the released neurotransmitters, terminating their actions on adjacent nerves. This way, the quantity of free serotonin will be increased, creating new connections between nerve cells. That said, Paxil may decrease one’s unwanted thoughts, fear, anxiety, and panic attacks.

How Long Does It Take For Paxil To Work?

Now, how long does it take for Paxil to work? Well, it usually takes 4 to 6 weeks, but within the first 1 to 2 weeks, one may see some improvement in their sleep, energy, or appetite. Seeing some improvement in these physical symptoms is quite important as it is considered as an early indicator that the medication is working. However, significant improvement when it comes to lack of interest in activities and depression may need up to 6 to 8 weeks.

Paroxetine is known to be the most anticholinergic of all the selective serotonin-reuptake inhibitors, which means that with its use, one can expect experiencing constipation. Other common side effects of Paxil include yawning and sleepiness, headache, nausea, and decreased libido. It’s also worth noting that the elderly will be more prone to experiencing these symptoms. Aside from that, Paroxetine may cause more weight gain than other SSRIs such as Sertraline. In fact, a study has found that Paroxetine-treated patients had an average weight gain of 3.6% – greater than Sertraline 1%. 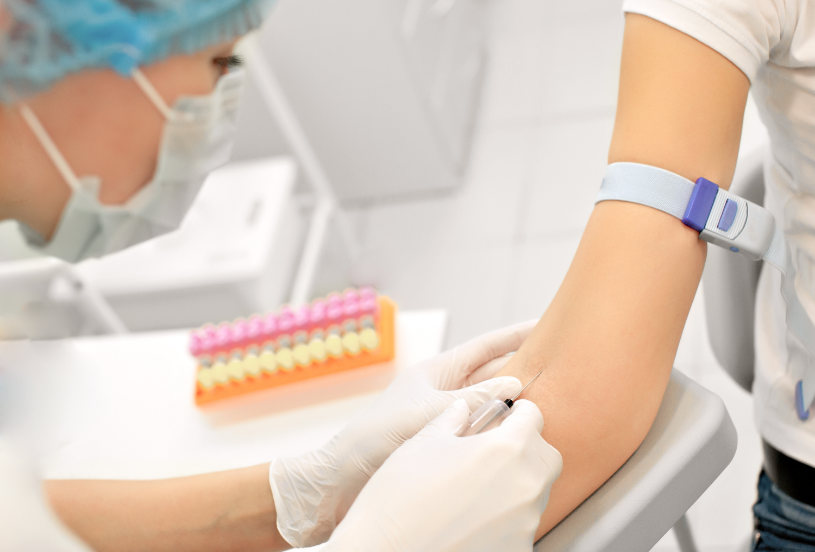 How Long Does Paxil Stay In Your System

So, how long does Paxil stay in your system? Paxil or Paroxetine is said to be 99% out of one’s body in 4.4 days, but again, it could vary from person to person depending on common factors like age, genetics, body mass, and metabolic rate, among others. The Paxil half life is approximated to be around 21 to 24 hours, depending on numerous factors. In essence, within 21 hours of use, 50% of the drug is removed from the body after stopping the medication. A patient who takes 40 mg of Paroxetine would have 20mg of it left in the body after 21 hours.

Of course, there are variables that affect the Paroxetine half life. Individual factors include age, body mass, genetics, hydration, metabolic rate, and hepatic or renal function. The Paxil dose one is taking and the term of administration will also likely affect the Paxil half life and how long it stays in their system.

Blood tests can detect the presence of Paxil within a few hours of use. At this stage, it is pretty hard to specify how long Paroxetine stays in the system or blood depending on individual factors like body mass, age, genetics, and hydration, but generally, Paroxetine would remain present in the blood for a maximum of 24 hours.

While it can be hard to ascertain the exact duration, Paroxetine stays in the urine due to different factors. Generally, it would remain in the urine for about 1-3 days depending on the dosage taken. A significant factor that influences this is hydration. Since the urinary flow is greatly affected by hydration, the excretion speed of Paroxetine in the urine is affected. But generally, Paroxetine would not be detected in a urine test. This is because Paroxetine is an antidepressant drug, and since antidepressants are not considered as drugs of abuse, urine screens are not designed to detect them. However, there may be cross-reactions that can produce false positive results.

As with most drug sensitive tests, Paroxetine will not be detected in a saliva drug test. Paroxetine might remain in the saliva for up to three days. However, this is not constant for everybody. This is due to several reasons. Basal metabolic rate plays a significant role in the duration of Paroxetine in the saliva. Individuals with high BMRs (Basal metabolic rates) tend to excrete certain drugs from their body faster than those with low BMRs. This is because those with high BMRs have lower body fat. Thus the amount of Paroxetine that can be absorbed in the body tissue is small.

Seroxat would remain in the hair for about 16 months after use. However, just like the rest, detection of Paroxetine in the hair shaft is almost not possible. Hair tests are carried out to detect the main drugs of abuse like cocaine, barbiturates, and methadone. Paxil can only be detected using a gas chromatography test, which is used rarely for specific medical purposes. This type is quite complicated and expensive for a standard pre-employment check.

Co-administered drugs may also affect the Paroxetine half life, so it is necessary to assess how other drugs affect Paxil’s pharmacokinetics. 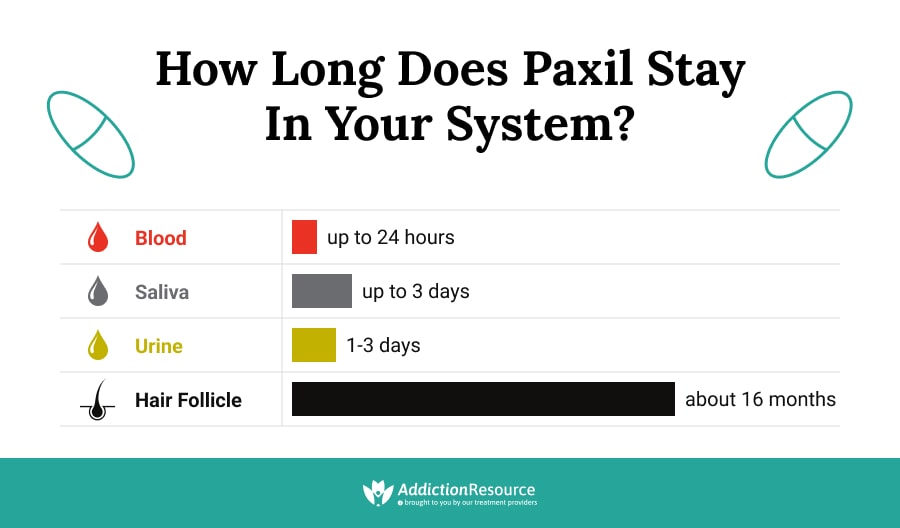 Will Paxil Show Up On A Standard Pre-Employment Drug Test?

No, Paroxetine is not a controlled substance nor is it considered a drug of abuse, and therefore will not show on any standardized drug test. Standard 5-panel, 10-panel, and 12-panel drug screens do not detect antidepressants. In addition, these tests are only commonly used to test for five drug categories: amphetamines, cocaine, marijuana, opiates, and phencyclidine or PCP. Instead, only special toxicology tests can detect traces of Paroxetine in the urine, blood, and saliva, and at this stage, it would detect Paroxetine as an antidepressant.

It is very unlikely for Paroxetine to produce a false positive drug test result as its metabolite does not have a similar chemical structure to the drugs that are usually being tested for. Meanwhile, Fluoxetine and Sertraline may do. As for Paroxetine drug interaction, it may increase the risk of serotonin syndrome when used with serotonin-increasing medications. These include antidepressants such as Buspirone and lithium and pain medications such as Tramadol. Paroxetine may also increase the effects or levels of the ADHD medication Atomoxetine, antipsychotic medications such as Risperidone and Aripiprazole, and some other cardiac medications and tricyclic antidepressants. And while it has not been proven to increase the mental health and motor skills impairment caused by alcohol, patients are advised to abstain from alcohol while on Paxil treatment.

How To Remove Paxil From The System Safely

There are different methods of removing this drug from the body. However, in a bid to flush Paxil from the body, caution must be taken. Since Paroxetine cures depression, making it a powerful antidepressant drug, swift removal from the body, especially for a long-term user, can result in severe health issues. The FDA describes Paxil withdrawal side effects as discomforting and prolonged. Hence, before switching it is recommended to ask a doctor about the possible alternatives to the drug, such as for example Paxil vs Prozac. Abrupt withdrawal also causes Paxil brain zaps, which ranges from flu-like symptoms to electric severe wave shock in the brain.

But the Following Methods Are the Safest Ways To Remove Paroxetine From the System:

Note that Paroxetine is a habit-forming substance that might require medical treatment for addiction. Do not hesitate to call any of the substance abuse rehabs in case of any signs of addiction.