Meloxicam Interactions: Dangers of Mobic with Other Drugs

Understanding Meloxicam interactions with other drugs, foods, and drinks is an essential factor for successful treatment. Numerous over-the-counter and prescription drugs are known to interact with this arthritis medication. Additionally, there are known Meloxicam interactions between the medicine and certain foods, and some diseases. A thorough understanding of these drug interactions, such as Meloxicam and Tylenol, can help make the medication’s use safer for the patient.

Tylenol is the most popular brand name for acetaminophen. It is approved by the FDA in the management of mild to moderate pain and to reduce fever. As a result, it can be used for several health conditions that cause these symptoms.

Meloxicam belongs to a class of non-steroidal anti-inflammatory drugs (NSAIDs), while acetaminophen does not. It is not recommended to mix NSAIDs with other analgesics. Still, it is generally accepted that Meloxicam and Tylenol can be used if Mobic alone is not effective for arthritis pain. There are no significant interactions between Meloxicam and Tylenol. Regardless, it is advised to inform your medical doctor before using Meloxicam with Tylenol. 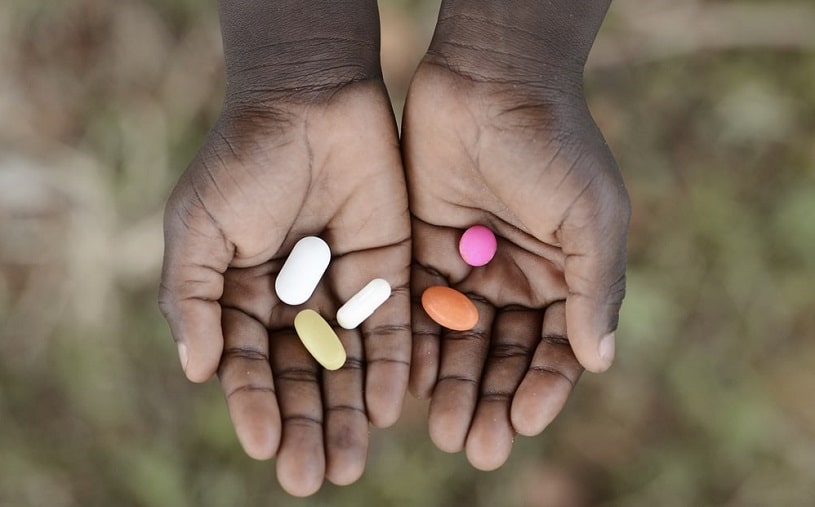 While Mobic is well-known to inhibit an enzyme called cyclooxygenase-2 (COX-2) to achieve its action, Tylenol’s mechanism of action is not certain. However, it is believed to have a mild inhibitory activity on COX-2. Acetaminophen doesn’t have the same side effect of GI bleeding as NSAIDs do, though it is more likely to cause liver damage.

Aspirin was originally a brand name for acetylsalicylic acid, though it has fallen into generic use. It is used to treat pain and fever but is also used as a mild antiplatelet agent to prevent blood clots. It makes it useful in the treatment of a lot of cardiovascular health conditions.

Both drugs are NSAIDs, which increases the chance of side effects like GI bleeding and peptic ulcer disease occurring. Meloxicam and aspirin should not be combined without informing your medical doctor. In some cases, an individual may be using low-dose aspirin for the management of heart conditions. In these cases, studies have shown that the antiplatelet activity is not affected by adding Mobic.

Meloxicam and aspirin both have similar mechanisms of action as they are both NSAIDs. However, while Mobic inhibits only COX-2, aspirin inhibits both COX-1 and COX-2. Aspirin is the only NSAID that doesn’t increase the risk of a heart attack or stroke.

Advil is a brand name for ibuprofen, an NSAID. Similar to the other NSAIDs, it is used to treat pain and fever.

Combining these drugs should generally be avoided as both are NSAIDs. If the pain relief is not sufficient, other drugs can be used as adjuncts, such as acetaminophen or mild opioids. Using Meloxicam and Advil together will increase the chance of NSAID side effects occurring. 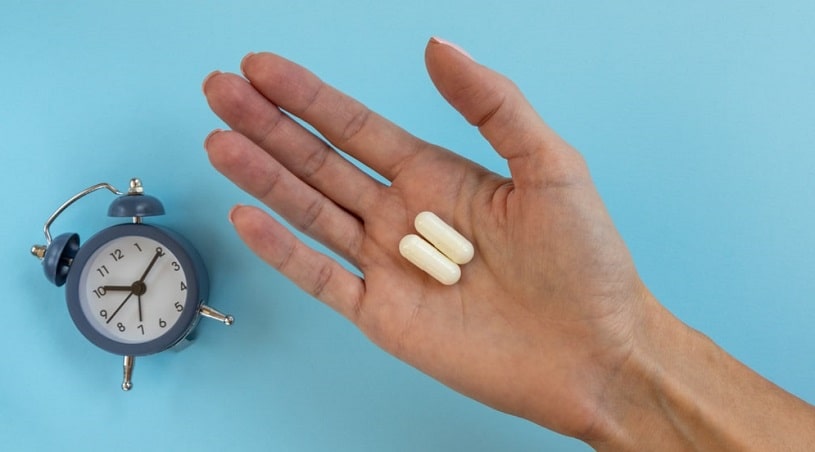 Advil inhibits both COX-1 and COX-2. Unlike Mobic, Advil can be obtained over-the-counter. It increases the risk of Meloxicam and Advil being used together without the knowledge of your medical doctor, which in turn increases the chance of heart, kidney, and GI complications of these drugs. Advil is only available in oral formulations, and Mobic can be used by injection as well.

Gabapentin is available under several brand names, such as Neurontin and Horizant. It’s primarily used in the treatment of seizure conditions, though it is also used to treat nerve pain.

Gabapentin is a GABA analog, which is a substance found in the CNS. Due to its similar structure to this neurotransmitter, it can slow down activity in the CNS by mimicking its inhibitory effect.

Mobic may interact with other oral medications, often causing a higher risk of internal bleeding, peptic ulcers, and other potential complications.

The specific interactions may depend on the Mobic pill dosage that the patient is using and the dose of other medications that the individual is taking alongside it. Both brand name and Meloxicam generic drugs will have similar interactions since the same active ingredients are utilized.

These include drugs such as acebutolol, nifedipine, bisoprolol, lisinopril, ramipril, and others.

Using it and prednisone together may cause an increase in the gastrointestinal side effects associated with NSAIDs when used over the long term. Information from one study was able to show that while corticosteroids do not pose a risk of causing side effects like peptic ulcer disease when combined with NSAIDs, the risk was higher than it would be using NSAIDs alone.

Aldesleukin is a medication known as a cytokine. It’s used in the treatment of renal cell carcinoma, a cancer of the kidney, and melanoma, a kind of skin cancer. Apixaban is an anticoagulant and prevents blood clots from forming in the veins.

The combination of Mobic and Aldesleukin poses a relatively high chance of causing the patient to suffer from nephrotoxicity. In addition, it may contribute to a reduction in kidney function.

Combining it and Apixaban causes a significant increase in the likelihood of internal bleeding.

Flexeril is known by its generic name of cyclobenzaprine, a skeletal muscle relaxant and is used to treat muscle spasms. It is a health condition where one of the symptoms tends to be pain, which explains why patients may combine it with Mobic. However, there is no information on well-documented interactions between these two substances.

This is the brand name for diphenhydramine, an antihistamine used to treat the symptoms of mild allergies. It can help with symptoms of hay fever, a cold, and allergies. 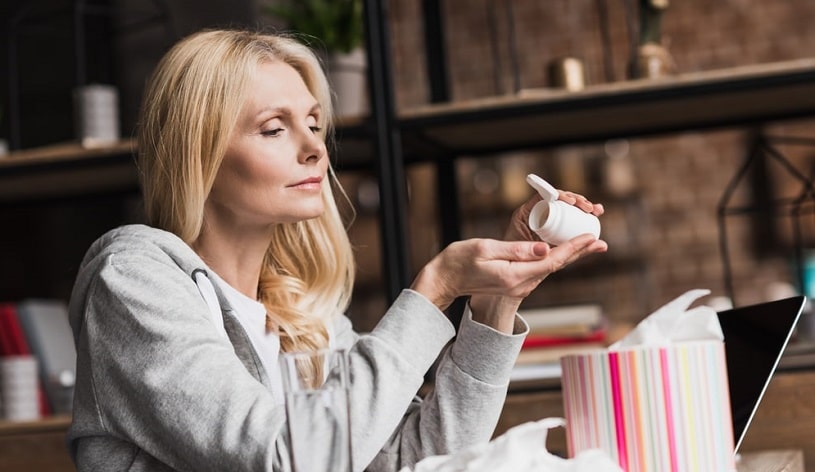 While combining these medications can result in Meloxicam interactions, they are mostly just mild in intensity. Mobic can cause the metabolism of diphenhydramine to be slowed down, which means that Benadryl may end up working for longer than intended.

Hydrocodone and oxycodone are both opioid drugs used as pain relievers. They are prescription-only drugs typically reserved for severe pain or pain that is not resolved by other analgesics alone.

Mobic and Hydrocodone may lead to peptic ulcers, gastrointestinal perforation, and other serious complications.

Similar complications may be observed when mixing Hydrocodone with different NSAIDs, such as when comparing Meloxicam versus Celebrex.

Mobic and oxycodone interaction includes a significant increase in the patient’s risk of experiencing complications with their gastrointestinal system. It is because NSAIDs and opioids both have specific GI complications that they cause. Combining the drugs has a larger effect on the gastrointestinal tract, which increases the chance of these effects occurring.

Speaking about Tramadol, which is also an opioid, it can sometimes be used together with NSAIDs and can even be more effective. However, Meloxicam and Tramadol combination should only be prescribed by the doctor.

It has been found that combining benzodiazepines, such as Xanax, with NSAIDs can reduce their efficacy in managing pain. For example, a study provided information showing that diazepam seemed to reduce the effectiveness of an NSAID in managing pain.

It is best to avoid using Mobic with any other NSAID as it increases the risk of NSAID side effects occurring. It includes the likelihood of heart attacks, strokes, peptic ulcer disease, and GI bleeding. However, there may be rare instances where a medical doctor may approve this, such as using aspirin alongside Mobic in a person with arthritis and a history of heart disease.

Mobic and ibuprofen can combine to give serious drug interactions. It can significantly increase the risk of the adverse health effects of both NSAIDs, including complications with the individual’s digestive system, so only one of them should be taken.

Interactions With Food and Drinks

How to Avoid Meloxicam Interactions

In some cases, combining Mobic with other oral drugs can be perfectly safe. Still, in other cases, it can significantly increase the risk of negative health effects or predispose to serious Meloxicam interactions. Therefore, it is better to use it exactly as detailed in the prescription information and only add other medications if approved by your medical doctor.