Alcohol Tolerance: Is Possible To Reduce It? 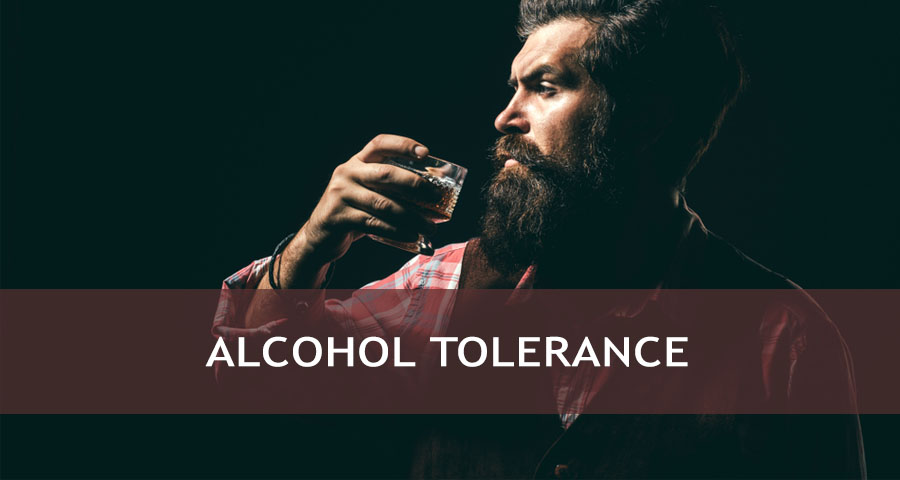 Alcohol is the most commonly consumed beverage other than carbonated soft drinks; in some countries, it is the number one drink. It is an intoxicating beverage that produces effects from excitement to narcosis depending upon the amount consumed.
Despite its known harmful effects, its addiction potential, and its ability to cloud judgment, it is being consumed by millions of people all around the world daily. A factor that is increasing consumption greatly is a physiological phenomenon called alcohol tolerance. This simply means that over time, the body develops an ability to tolerate amounts of alcohol that have dangerous effects on health.

To better understand alcohol tolerance and how it works, it’s useful to know a little more about alcohol itself, and how we measure it in drinks and the bloodstream.

All Alcohol is Not The Same

Alcohols belong to an organic class of compounds, and the one used in drinks is a spirit called ethyl alcohol, which is mixed into fermented and distilled drinks in varying percentages.

Rum, whiskey and brandy contain almost 50% alcohol, while wines have 10-15% alcohol and beers have still lesser percentage of 3-10%. Alcohol is made from grapes or mixed with molasses and grains to produce various beverages.

Monitoring of alcohol can be done by observing the person or by the use of tools like breathalyzers. The Blood Alcohol Concentration (BAC) is used to classify short-term signs and symptoms that appear after certain amounts have been ingested. Some levels are given below:

How does Alcohol Tolerance Work?

Alcohol tolerance refers to the capacity of the body to tolerate large amounts of alcohol. Due to chronic and excessive consumption by alcoholics, their bodies need more alcohol to produce the same effects that a new or non-frequent drinker would feel on taking standard units of alcoholic beverages.
Can a person build up a tolerance to alcohol? Absolutely. Tolerance to alcohol develops over time, meaning that over the weeks and months of drinking, one needs more and more of it to achieve the same physical effects.
The primary cause of alcohol tolerance is excessive and frequent consumption of alcohol, and tolerance occurs less often with people who only drink occasionally. However, body type, gender, ethnicity, and metabolism are also factors that contribute to the development of tolerance.

Like every other drug or compound, alcohol is metabolized by the liver and stomach, and the metabolism of ethanol in individuals varies. Not everyone digests alcohol in the same way. This variation is due to levels of a metabolic enzyme called alcohol dehydrogenase (ADH) in the body, which converts alcohol into acetaldehyde (a very toxic intermediate product) and later converts it into water and carbon dioxide. This enzyme is our strong defense against the highly toxic effects that non-metabolized alcohol can produce on the nervous and cardiac systems. Some people have slower variants of these enzymes, which has been linked to tolerance and dependence. Usually, one standard drink is metabolized in one hour, but people who have little or no ADH have no simple way of metabolizing the alcohol. Thus they develop effects and build alcohol tolerance faster than people who do have ADH.

People who are muscular and have large bodies need more alcohol to get the same effects that an individual with average height and build would need. This is because alcohol gets distributed in the periphery where there are a lot of tissues, before going into the brain and producing the desired sensations.

Studies have found that women get drunk faster and feel stronger effects than men. This is because they have smaller bodies and a higher proportion of fat than men, so their bodies need less alcohol to induce insobriety. They also have lower levels of the ADH enzyme. Thus the alcohol remains in their bodies longer.

For people of various ethnicities, genetic differences mean differences in alcohol tolerance levels. The majority of Asians don’t have ADH and thus cannot metabolize alcohol. Some enzymes are present that can metabolize alcohol but at a prolonged rate, and they cannot compensate for the ADH deficiency. Thus Asians tend to get drunk a lot faster than Americans or Europeans. The difference is so dramatic that if an Asian person with ADH deficiency consumes the average amount consumed by people in the West, they might develop an alcohol flush reaction. This response causes red blotches to appear on the skin or face and back and sometimes the whole body due to the accumulation of acetaldehyde that cannot be metabolized. Almost 36% of Asians experience this reaction.

Reverse Alcohol Tolerance and Other Types of Tolerance

Over time, tolerance to alcohol compels some people to use higher and higher amounts, resulting in a further inclination towards alcoholism. Eventually, such high quantities damage the liver, impeding its ability to produce the enzymes needed to break down alcohol. This phenomenon is known as reverse alcohol tolerance, and it can lead to alcoholics becoming drunk on tiny quantities of alcohol.
Some other types of tolerance include the following:

Is a High Tolerance for Alcohol Genetic?

Genetic differences do account for some differences in alcohol tolerance, which in some cases fall along ethnic lines. As described above, most Asians don’t have the alcohol metabolic enzyme alcohol dehydrogenase (ADH), which means they tend to get drunk faster than Americans or Europeans.

To reduce alcohol tolerance, a person needs to reduce the amount of booze one drinks. Refraining from drinking will lower the body’s alcohol tolerance level. As a result of lowering the tolerance, one will feel the effects of alcohol after consuming smaller quantities than before. This method is used to prevent the development of alcohol dependence and alcohol abuse.
This process is simple to understand but hard to follow, yet it works miracles in reducing alcohol tolerance. Refrain for a few days, and the body will automatically lower the level at which alcohol produces its effects. After this time, people who couldn’t previously get drunk after 5-6 drinks, feel alcoholic effects after one drink. This is done to reduce alcohol tolerance and prevent alcohol abuse.

If someone is already far down the path of addiction, it may not be secure or feasible for them to simply reduce the number of drinks they consume. For these people, we suggest:

How Long Does it Take to Reduce Alcohol Tolerance?

Well, it depends, because the time required to change tolerance level varies from person to person. However, decreasing the number of drinks per week works for most everyone. For most people, a month without alcohol works just fine to reduce someone’s tolerance. Also, the first month is the hardest, but gradually decreasing the number of drinks per week can help to bring down the tolerance level, without suffering from withdrawals.