Alcohol-Induced Depression: How to Prevent and Treat It?

Resorting to alcohol probably didn’t result in euphoria or make the circumstances we were trying to forget go away, but we did lighten up a bit. Or at least it felt that way. But this feeling is illusory because the real relationship between alcohol and depression is summed up in the following statement:

Alcoholism can CAUSE depression or intensify existing symptoms of depression.

This statement may “ring false” at first because if a user has resorted to having a drink or two when in a depressing situation, one may get an experience of how a cocktail or a glass of wine seems to lift the mood and seems to make the user forget about worries. At least for a while. So the idea that alcohol causes depression sounds counter-intuitive.
However, there is a wealth of scientific research that suggests that alcoholism indeed increases the risk of a person developing depression. Alcohol also magnifies the symptoms of any existing depressive disorder.
According to findings, about 30 to 50 percent of all people with alcohol use disorders also suffer from depression. The connection between depression and alcoholism runs both ways, and it runs deep.

Can Depression Lead To Alcoholism?

There is a reason why so many people reach for an alcoholic drink when they are feeling the blues. That’s because alcohol can genuinely lift one’s mood, at least for a while.
According to research by a team of scientists at the Ernest Gallo Clinic and Research Center at the University of California, San Francisco, drinking alcohol triggers a rush of endorphins (the “happy chemicals”) in the orbitofrontal cortex and nucleus accumbens, the areas of the brain responsible for producing feelings of pleasure and reward.
A person feels happy when he drinks alcohol because of the endorphins released in the brain. The brain recognizes the release of endorphins as a pleasant experience, and thus subtly urges the person to drink more alcohol whenever he feels depressed.
So on one level, alcohol does cause one to feel a little less sad or depressed. And because drinking results in feelings of pleasure, people tend to take refuge in it the next time they feel down in the dumps.
But this is part of an alcohol-depression cycle. Here’s how it works and how depression can lead to alcoholism: 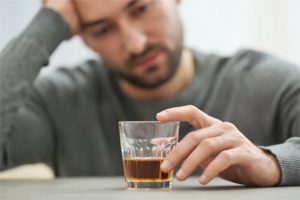 Yes, according to the American Psychological Association, alcoholism triggers depression or worsens existing symptoms of depression.
Alcohol makes one feel depressed because chemically, it is a depressant. When consumed, alcohol has a sedative effect on the brain; at the same time, it triggers the release of endorphin and dopamine – the “happy hormones.” Alcohol can cause depression because when the initial effects of drinking fade, levels of these hormones also drop, making the user feel depressed.
Although the first few glasses of wine may seem to uplift the mood, the more one drinks, the more depressed they become. Here’s why alcohol does cause depression:

Alcohol can trigger depression in several indirect ways, as well:

Alcoholism and depression is a vicious cycle. On the one hand, the depression after drinking alcohol makes a person drink more, and that worsens his or her depressive mood. On the other hand, depression can lead to alcoholism that, in turn, aggravates the symptoms of depressive disorder.
According to several research studies, binge drinking is one of the most common causes of alcohol-induced depression. Here’s why:

Alcohol and Depression: The Genetic Link 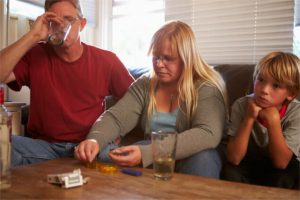 People whose families have a history of alcoholism tend to have lower endorphin levels. This means that they are more prone to depression and also have a higher chance of becoming alcohol dependent.
While it is generally agreed that alcohol does make depression worse, it is probably futile to ponder the question of which develops first: alcoholism or depression. There are as many neurological and environmental factors that trigger addiction in people with depressive disorders, as there are factors that contribute to depression in alcoholics. But what is interesting is that scientists have uncovered genetic links between alcoholism and depression.
Given below are the findings from some studies: 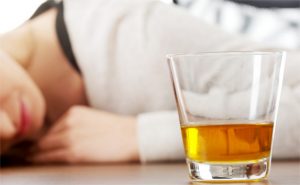 Alcoholism and depression are common co-morbid disorders, according to the findings of the Epidemiologic Catchment Area study carried out by the National Institutes of Health. The consequences of co-morbid alcohol depression anxiety are frightening:

However, the most severe consequence is the high rates of suicide amongst people who suffer from alcoholism and depression, according to research conducted at the Western Psychiatric Institute and Clinic of the University of Pittsburgh Medical Center.
The feelings of listlessness, despair, and hopelessness brought on by depression are potent enough to trigger suicidal thoughts in individuals or actually drive them to take their own lives. Ironically, many of these suicides occur as a result of alcohol withdrawal depression, in people who are trying to stop drinking but are overcome by depression after quitting alcohol. This is one of the reasons why alcohol recovery specialists recommend professional alcohol and depression treatment, and not trying to suddenly quit drinking on one’s own, especially if already depressed.
Alcoholism compounds matters. Here’s how alcohol tweaks and twists the brain and makes a person engage in self-destructive behavior:

How to deal with alcohol and depression connection: