This formulation is assigned an AB rating by the FDA (meets the necessary bioequivalence standards established by the US Food and Drug Administration). In contrast, venlafaxine hydrochloride extended-release form isn’t.

The original formula of the drug was discontinued from the US market because it was required for the patient to take 2 to 3 doses daily, while Effexor XR can be taken once daily. Moreover, it  causes less nausea than the original formula.

Most commonly it is used in the form of extended-release capsules, which are sold under the brand name Effexor XR. These capsules contain 37,5mg, 75mg, or 150mg of the active ingredient. Doctors may also prescribe venlafaxine tablets, which are sold under the generic name. These are immediate-release tablets with the following strengths: 25mg, 37,5mg, 50mg, 100mg. The same generic variant also has extended-release oral tablets, with the strengths: 37,5mg, 75mg, 150mg, and 225mg.

Below, some common venlafaxine capsules and tablets are described.

Effexor capsules have a cylindrical shape, made from dissoluble gelatin, which contains venlafaxine powder. Capsules cannot be divided or cut into pieces. 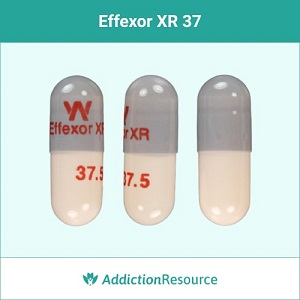 37.5 mg if the lowest dose of the branded drug available. The capsule is grey at the top, and the lower part is of peach color. The imprint on the upper part-reads W Effexor XR. The lower part has 37.5 imprinted, which indicates the dosage. Pfizer manufactures this type of capsules. 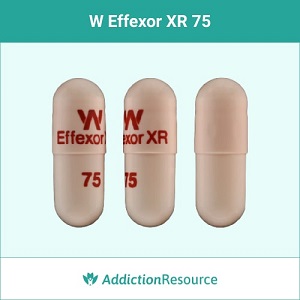 This is a peach capsule is 75mg in strength. Venlafaxine ER 75mg capsules present the usual starting dose for most patients with generalized anxiety disorder. The imprint is printed in red with X Effexor XR on the upper part and 75 on the lower. It belongs to the group of SNRI (Serotonin-norepinephrine reuptake inhibitors) antidepressants.

The strength of such capsules is venlafaxine 150 mg, which is a high dose. This capsule is red and has W Effexor XR imprinted on the upper part.

Tablets are essentially compressed powder and can take on a lot of shapes and colors: 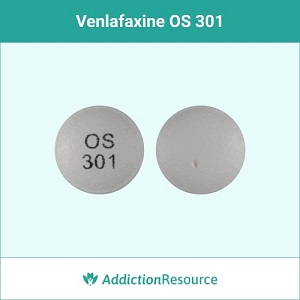 This is an extended-release formulation containing venlafaxine 37.5 mg. The pill is white and round. It has an imprint of OS and 301 below it. Upstate Pharma LLC supplies this type of tablet. Effexor side effects include constipation, insomnia, dry mouth, and fatigue. 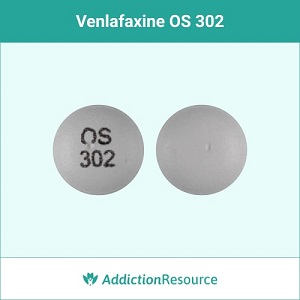 OS 302 tablet is also supplied by Upstate Pharma LLC and has the same color and shape. Venlafaxine 75 mg is a mild dose of the medication. 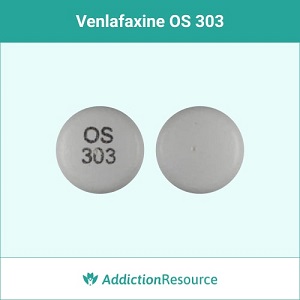 This formulation contains venlafaxine er 150 mg, which is a strong dose. Withdrawal symptoms after taking such an amount long-term will be more pronounced. Therefore it is advised not to try to get off the medication without a doctor’s assistance. 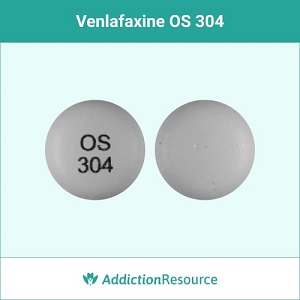 OS 304 pill contains 225 mg of the active ingredient. This is the strongest dose available, and it is not available in the form of Effexor capsules. 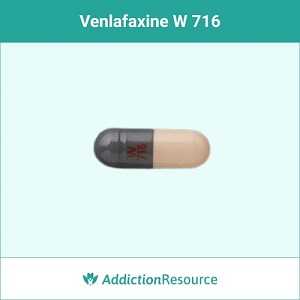 The gray & white capsule with a red imprint W 716 contains 37.5 mg of the active ingredient. Effexor can cause weight gain or loss. It’s advised to consult a doctor if such side effects disturb the patient. 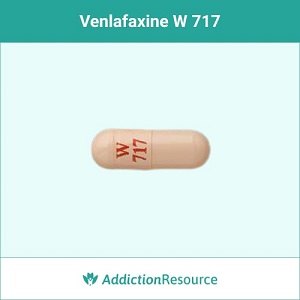 The capsule with a red imprint W 717 on the upper part is identified as a venlafaxine 75 mg capsule. It is an extended-release formulation supplied by Wockhardt USA LLC. 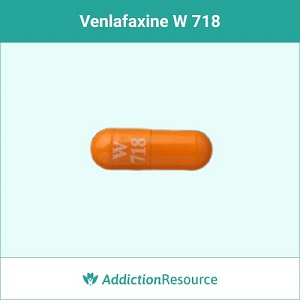 This capsule contains venlafaxine 150 mg, and is also an extended-release formulation. It is orange and has the letter W and number 718 imprinted. It is not recommended to combine Effexor and alcohol, because it can lead to the development of more adverse reactions. Moreover, alcohol potentiates symptoms of overdose, which can lead to increased lethality in such cases. 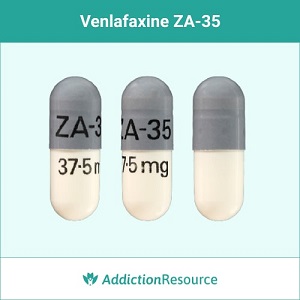 The strength of this type of capsule is identified by the imprint on the lower part, which is 37.5 mg. The imprint on the upper part reads ZA-35. It is an extended-release formulation of the generic drug. 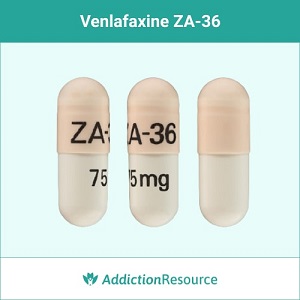 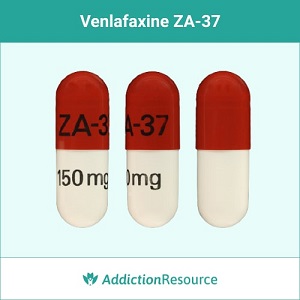 This capsule contains venlafaxine 150 mg. The upper part is red and has ZA-37 imprinted. The lower part is white with the strength imprinted. 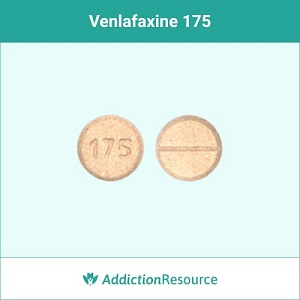 The pill with an imprint 175 on one side and a horizontal line on the other contains 25 mg of the active ingredient. It is identified as venlafaxine hydrochloride immediate release. 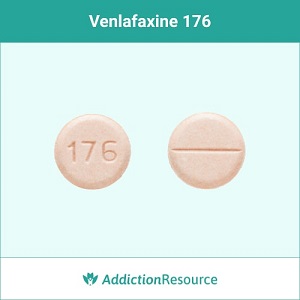 A round tablet with an imprint 176 is identified as venlafaxine 37.5 mg. The supplier is Northstar Rx LLC. 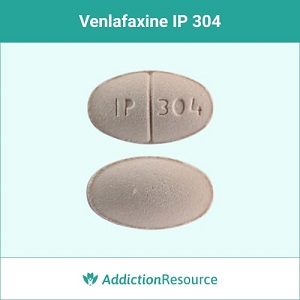 The imprint on venlafaxine 75 mg tablet is IP on the left side and the number 304 on the right. There is a vertical line between them. The tablet is oval. 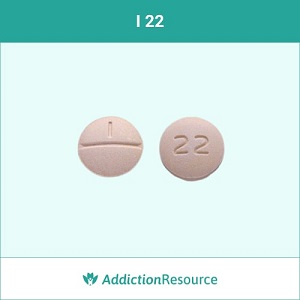 I 22 pill is peach and round. There is a horizontal line under “I,” and the number 22 is imprinted on the other side. It contains 100 mg of the active ingredient, which is a strong dose.

Effexor tablets are usually stored in standard carton boxes. Larger amounts of capsules can also be found in plastic bottles, which is more convenient. All medicines should be kept in their original packages and stored at moderate room temperature (from 20 to 25 degrees C, or 68 to 77 degrees F) away from moisture and heat in a tightly sealed container. Avoid storing this medication in areas where it could get damp or wet, such as bathrooms.

How To Choose The Best Form?

Only a doctor can choose the best form of Effexor tablets or capsules for each patient. Still, the ones with graver mental health problems might find it more beneficial to use extended-release pills. One study has shown that this is more efficient than immediate-release formulation. Another study proved that ER pills have fewer risks than IR tablets. However, only a doctor can appropriately weigh the pros and cons of Effexor tablets vs. capsules. Moreover, only a professional can assess the contraindications and determine whether a patient should take these pills.

Various withdrawal symptoms may appear if one stops taking this medication without consulting with a doctor. People addicted to Effexor tablets can treat their condition with psychotherapy, support groups, and numerous other addiction treatment programs. There are drug rehab centers with diverse addiction programs across the states, which might be particularly efficient in helping people with addiction to this medication.