Addiction Resource » Drugs of Abuse » Soma » How Long Does Soma Stay in Your System?

How Long Does Soma Stay in Your System? Carisoprodol Half-Life

Soma (Carisoprodol) is a muscle relaxer that helps relieve pain due to skeletal muscle conditions. Soma half-life is relatively short, and it takes 11 hours on average to eliminate it from the system. However, these numbers can vary between different patients. Soma drug tests are not common, but some population groups may be tested for this medication.

How long does Soma stay in your system? How does it work? And what should you know about Soma drug testing?

Will Soma Show Up On a Standard Pre-Employment Drug Test?

Does Soma show up on a drug test? Carisoprodol is not included in a pre-employment drug test and on the SAMHSA-5 screening. The substance will only be detected if the employer asks explicitly for Carisoprodol to be included in the panel.

However, Soma drug tests may be required in case of an overdose to determine exactly what drugs have caused it.

Who May Be Tested

As stated above, employers do not usually test Carisoprodol drug, and the medication is not part of the SAMHSA-5 screening. But even if the drug is rarely assessed in a standardized panel, there are some situations where individuals are tested for it.

Some military members have to operate heavy machinery and are frequently involved in missions where they need optimal cognitive function, alertness, and vigilance. 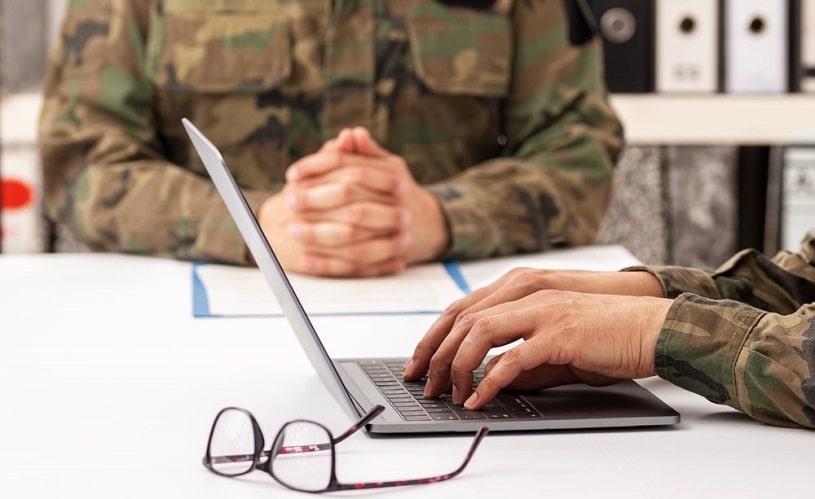 Carisoprodol side effects could make the military member endanger other troops and even compromise the mission. That is why military members might be subject to a random Soma drug test.

Rehab patients are usually subject to extensive drug tests. Even though Carisoprodol is not labeled as a significant drug of abuse such as amphetamines or opioids, it is frequently abused. That is why if an individual in rehab has used or abused CNS depressants, Soma drug tests are necessary.

Because this muscle relaxer has similar effects to benzodiazepines, criminals might use this for intoxication, as a date rape drug, or for other illicit means. That is why if an individual is considered a suspect in a case or a criminal, the Soma drug testing will be conducted along with the potential victim.

Employees who have to operate machinery, heavy-duty equipment, or motor vehicles, such as machine operators, bus drivers, pilots, or truck drivers, might be subject to extensive drug testing. Employees who are under the effect of the substance are prone to injuring themselves and others or damaging equipment. 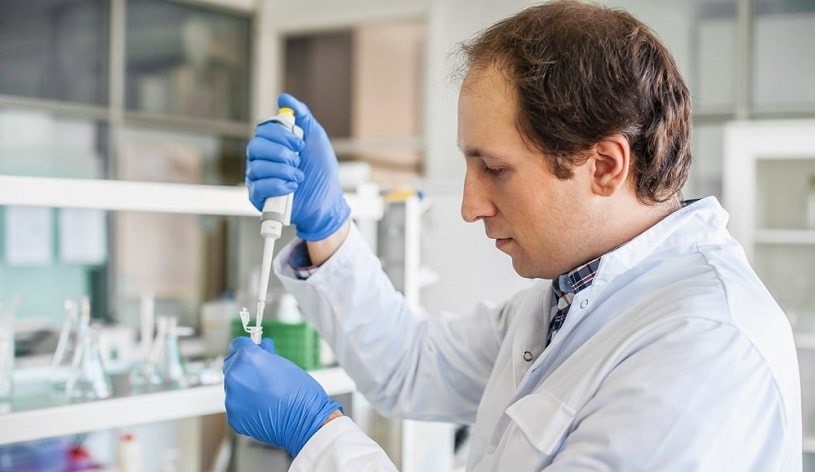 Because the side effects of soma muscle relaxer include tremor, dizziness, drowsiness, and blurred vision, it has been included among the ten most common drugs associated with DUI. That is why drivers might be tested to see if Carisoprodol causes their driving impairment.

The half-life of Soma varies between 1 and 3 hours, so it will take around 11 hours to eliminate a dose of this substance.

The drug’s metabolites, such as Meprobamate, will take longer to be excluded from the system. Therefore, it will take almost four days to eliminate these metabolites, even after eliminating the parent drug.

How Long Does Soma Stay In Your System?

This question depends on several factors, such as the dosage administered. Doctors recommend 350 mg or 250 mg doses two or three times per day for no longer than three weeks due to its risk of abuse and dependence.

Carisoprodol could show up in a blood test for about 24 hours after a single dose. If the blood sample is collected up to a maximum of 4 hours after ingestion, the amount of the medication that patient took can be determined.

How long is Soma detectable in urine? Due to Soma half-life, in a urine test, it shows up for 2-3 days after a single dose and for longer in chronic users. For some individuals, the carisoprodol level might be more prominent, while at others, the meprobamate metabolites can appear in higher concentrations depending on the person’s metabolism.

The saliva test shows Carisoprodol up to 4 hours after administration. A saliva test will reveal precisely the quantity of meprobamate metabolites in the saliva.

Because this test is efficient for a short duration after the medication is ingested, it is usually applied when an intoxicated individual refuses to take the urine or blood test.

Carisoprodol can be detected in a hair test up to a month after the last dose. However, there is a drawback to this test; it will take longer for the metabolites to appear on the hair follicle after ingestion. It means that if an individual used Carisoprodol recently, the urine test would be more efficient in detecting the drug. Still, if it were ingested within the past three days, then the hair test would be valuable. 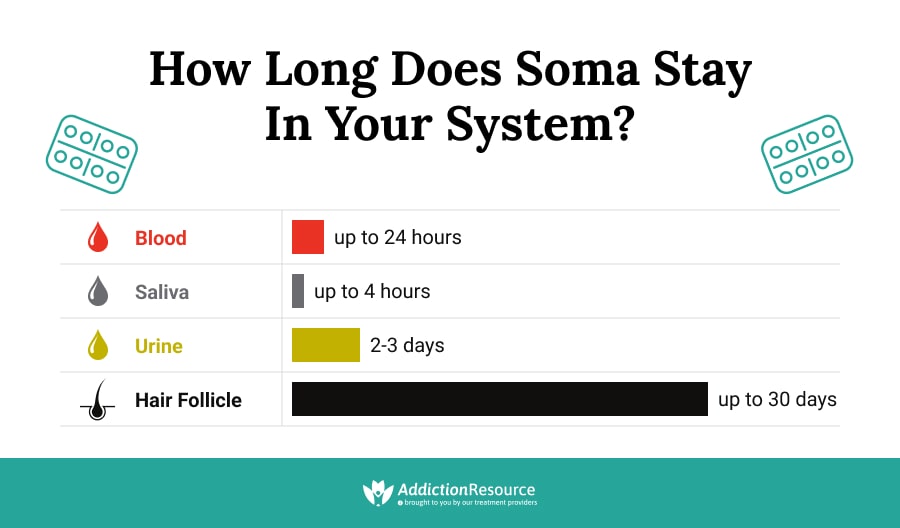 Factors That Affect How Long Soma Will Stay In The System

Although the half-life of Soma can be approximated, the estimated time on how long it stays in the body varies from individual to individual and depends on some factors.

Several Variables Can Influence the Time This Medication Stays in the System, Such As:

Co-administered drugs also play a role. Some Carisoprodol interactions may cause the drug to stay in one’s system for longer.

Carisoprodol is a centrally-acting muscle relaxant. The exact Carisoprodol mechanism of action is still not fully understood. However, it is thought that it inhibits the interneuronal activity in the spinal cord and the descending reticular activating system. This way, it provides muscle relaxation.

With the standard prescription of 250 mg and 350 mg, the absorption time of Carisoprodol is 30 minutes. The drug’s effects will last between 4 and 6 hours. It is widely distributed in the system, and it is metabolized in the liver.

Carisoprodol is excreted in urine under the form of metabolites, and only 1% of the medication will be excreted unchanged.

Although the Soma drug class is a skeletal muscle relaxant, the drug’s metabolites might cause a false positive test. Meprobamate is the primary metabolite that plays a role in the Carisoprodol mechanism of action. Its effects are similar to barbiturates when it comes to how they affect the body and brain. 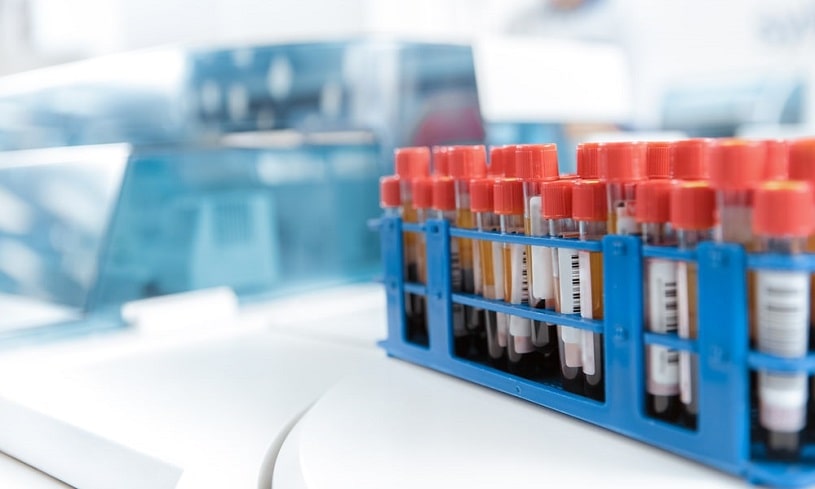 Meprobamate is a sedative-hypnotic frequently used for the treatment of anxiety. Later it was classified as a schedule IV controlled substance by the DEA, and now it is rarely used. Meprobamate might lead to a false positive test.

How To Remove Soma From The System Faster

It is worth mentioning that there are ways to remove Carisoprodol from the system faster. However, one should try these only after asking a doctor about their safety and efficacy.

Here Are Some of the Tips:

Note that these options should be previously discussed with a medical professional. Do not hesitate to ask for help if suspecting substance abuse in a loved one. Contacting a treatment center can prevent a person from suffering severe consequences of drug abuse.

The most effective option will be to stop taking the drug and ask a doctor about Soma alternatives, to make the treatment more comfortable.