Addiction Resource » Drugs of Abuse » Seroquel » How Long Seroquel Stays In Your System?

Seroquel Half-Life: How Long Does Seroquel Stay In Your System?

Seroquel is a drug often prescribed to patients with schizophrenia. The drug is sometimes used in the treatment of other mental health conditions, too, including bipolar disorder, for example. Individuals who take the medication may be at risk of developing abusive behavior. Understanding how Quetiapine metabolism works is essential for people who want to stop the use of Quetiapine. The chemicals in the drug may remain in one’s body for some time. By understanding Seroquel half-life, a person can know when the chemicals will be out of their body.

Quetiapine is classified as an antipsychotic medicine. The resulting calming activity from the drug administration is believed to be down to the combination of antagonism at specific brain receptors. These include the 5HT2A receptors in the frontal cortex and D2 receptors in the mesolimbic pathway. These effects become dangerously increased when one overdoses on the medication.

How Does Seroquel Work For Mental Diseases? 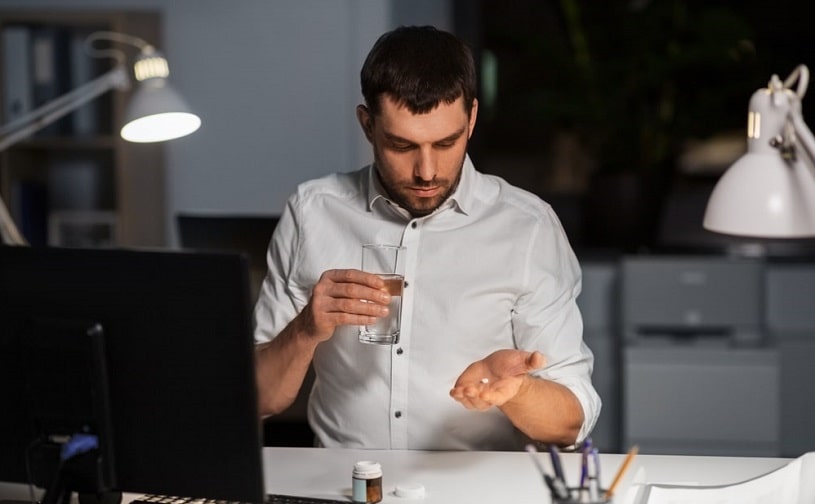 Serotonin and dopamine have differing roles regarding the effect of Seroquel on the brain, and the introduction of Quetiapine into the system directly affects the production of both. It happens because an excess of dopamine in the mesolimbic tract is believed to be a major cause of the positive symptoms of schizophrenia. Thus, the introduction of Norquetiapine – an active metabolite of Quetiapine that causes antagonism of dopamine in the D2 receptors – directly suppresses dopamine levels, consequently reducing or eliminating the positive symptoms of schizophrenia.

Quetiapine mechanism of action shows the effectiveness of administering Seroquel for depression and other mental health conditions, such as major depressive disorder. It is believed to be down to the potent inhibitory effects and high affinity of the norquetiapine metabolite at the norepinephrine transporter.

How Long Does It Take For Seroquel To Work?

The period it takes for the Seroquel mechanism of action to kick in depends on the medication variant that is administered, and it may also vary according to the condition suffered by the user. The tablet is available in immediate-release (IR) and extended-release (XR) states, and both variants require different amounts of time to reach peak levels in the body. The immediate-release tablets typically reach peak levels at one and a half hours after administration. In contrast, the extended-release tablets may take up to six hours to reach peak levels. Due to the Seroquel mechanism of action, it can take up to three months for the full effects of the medication to show. However, the first improvements will be seen just after one week.

Quetiapine overdose deaths can happen; that is why patients should not intake more Quetiapine than a physician prescribed.

When a person stops taking Quetiapine, they need to realize that the active chemicals found in this medicine will not be expelled from their system immediately. It can take a while for Seroquel metabolites to be removed from the body effectively. Recognizing Seroquel half-life can help a person to understand when 50% of all active chemicals will be removed from their body. At this point, some Seroquel drug test may yield a negative result.

Quetiapine MOA is relatively short-lived. The drug is metabolized in one’s body, and the active chemical goes to work within the first hour after the person taking medicine. It takes between one and two hours for Seroquel to reach a peak concentration in a patient’s body. 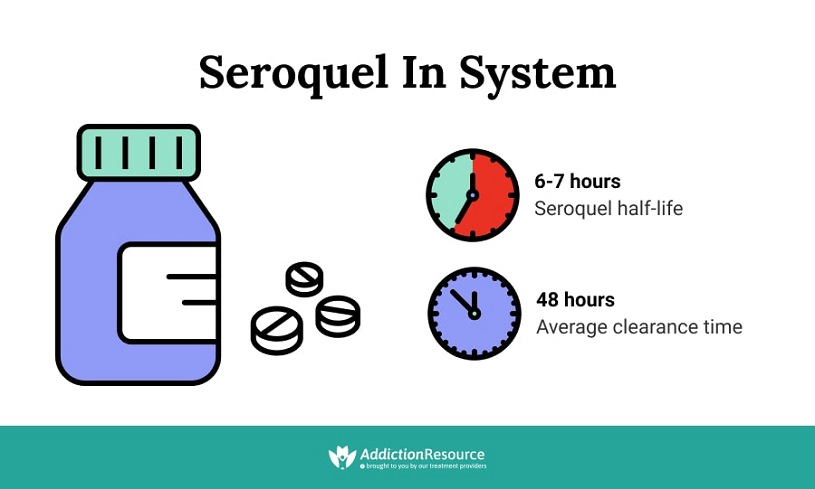 When a person asks what Seroquel half-life is, they should note that about half of all active chemicals will be removed from their body within the first 6-7 hours following the last administration of Quetiapine.

Observing the drug’s half-life, people should note that this only refers to half of the substance that was administered. Following this six-seven-hour period, there are still some traces of the active chemicals in the drug circulating in patient’s body.

Many people may find that the chemicals in this drug are expelled from their bodies within 48 hours after the last administration. It does not refer to the Quetiapine half-life but rather to the body’s ability to eliminate all traces linked to the drug. The specific time varies from one person to the next, however. The classification of Seroquel means some factors may affect how the body metabolizes the drug.

How long does Seroquel stay in your system? A few factors should be considered. Below are the important factors that may affect the period during which the drug will still be present in a person’s body:

One of the most critical factors is age. Older people have reduced hepatic blood flow. This can alter the way that Quetiapine is metabolized. It may also affect how long the medicine will remain present in a person’s system. The poor metabolism in the elderly further contributes to an extended medication half-life.

A person’s weight also presents as a factor in determining Seroquel half-life and how long the medicine stays in your system. A person with a higher body weight may find that their body takes longer to metabolize and dispose of the active chemicals in this drug.

Food intake also seems to play a role in the period it takes the body to remove all traces of Quetiapine. In addition to food, hydration also appears to have a role to play. Inadequate hydration affects urinary flow, which may cause the drug to circulate in one’s body for a more extended period.

A person with hepatic impairment may also find that Seroquel remains in their system for longer. When a person has a liver problem, a high dose of this drug can cause poor metabolism. It extends the half-life and time it takes the body to clear the substances from the system too.

The specific dosage that a person takes also affects how long it will take for the body to get rid of the chemicals. Quetiapine 25mg dose will undoubtedly be removed from the body significantly faster compared to a higher amount, such as 200mg, for example.

Another factor that comes into play when considering the Seroquel drug test is the treatment duration. A person who has been taking it for a longer period will find that it takes their body longer to get rid of the chemicals.

The chemical accumulates in various areas of the person’s body. Quetiapine half-life refers to how long it takes for only half of the substances to leave the body. Following this period, the person will still find that some drug’s active compounds are present in their body. 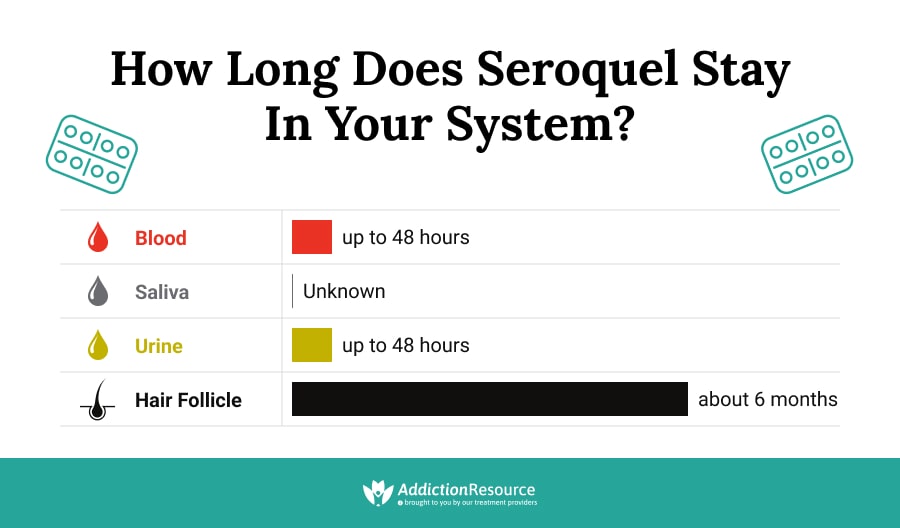 Standard drug tests are not designed to detect Quetiapine. They can detect illicit substances or some prescription medications, like opioids. However, different other types of tests may be performed to detect the presence of Seroquel in a patient’s body. Some parts of one’s body may have remaining drug compounds for an extended period compared to other parts. Thus, it is important to differentiate between blood, urine, hair, and even saliva.

How Long Does Seroquel Stay In Your Blood and Urine?

It is generally thought that Seroquel will leave the system entirely within 48 hours. In one study about the detection of Quetiapine in a person’s blood, urine, and hair samples, the initial test was done in 43 hours following the drug administration. The researchers describe that traces of Quetiapine were found in both blood and urine samples.

This was within the 48 hours during which the drug is metabolized by the body. This period already exceeded the Quetiapine half-life, which explained the low concentration of the chemicals detected in urine and blood samples.

How Long Does Seroquel Stay In Your Hair Follicle?

At six months following the drug administration, traces of its active chemicals were still detectable in the patient’s hair samples. Thus, Seroquel does seem to remain active in hair follicles and in hair itself for a much more significant period compared to urine and blood samples.

Clearing Quetiapine From The System

When it comes to detoxing from the drug, it’s not advised to quit it cold-turkey. It will lead to Quetiapine withdrawal, and to make it easier, the dose should be tapered off gradually.

It is crucial that the patient initially considers factors that affect the metabolism of Quetiapine in their body.

The person should also have a thorough understanding of Quetiapine warnings and consider the dosage – high doses lead to more serious adverse effects and causes the drug to remain active for longer. Speaking about such a side effect as Seroquel weight gain, it is not dose-dependent. So, even with a low dose, a patient can experience this side effect.

While one is tapering off the drug, withdrawal may still appear. It is advisable to undergo medical detoxification to manage it faster and more effectively. If one feels unable to function daily without this drug, they may be addicted to Seroquel. This condition may lead to irreversible health damage and needs to be observed by addiction treatment experts. Help from a rehabilitation center should be admitted to begin a healthy and addiction-free life.