Quetiapine Interactions: Can One Take Alcohol and Seroquel?

Seroquel belongs to the class of antipsychotic drugs that are used to treat schizophrenia, bipolar disorder, and other mental illnesses. Like all medicines, Quetiapine interactions can  occur with certain medications and substances. Read along further to find out about the interactions of Quetiapine and alcohol, other Seroquel drug interactions, and how to use it safely to avoid these dangerous Seroquel interactions.

Since the Seroquel pill is prescribed for certain mental illnesses to improve one’s mood, sleep, and self-esteem, some patients might combine it with alcohol to enhance its effects. However, according to the guidelines of the Food and Drug Administration, alcohol should not be consumed while taking Quetiapine as it can worsen the side effects. 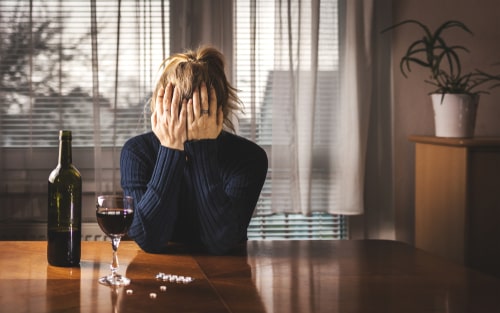 Drinking on Seroquel can affect the way the body metabolizes Quetiapine and can make even small amounts of the medicine more potent. This can result in the worsening of its side effects. Both of these substances can cause the effect of each other to increase, which can result in a dangerous overdose condition.

The use of Seroquel with alcohol may not pose a threat in some cases of alcoholism, where the medicine can be used to relieve the symptoms of alcohol abuse. However, it is still not advisable to use both these substances together without consultation from a doctor.

The use of weed with Quetiapine can increase side effects such as dizziness, drowsiness, confusion, and difficulty in thinking. Seroquel and weed can also cause impaired judgment and difficulties in motor coordination in some individuals, especially the elderly. The ingestion, inhalation, or smoking of any of these drugs can increase the risks of the mental illness for which Quetiapine is being taken, or it may cause a relapse in the condition.

When cocaine is used while taking Seroquel, it can increase the side effects of Quetiapine even when taken on low doses. The most commonly experienced side effects which can worsen include dizziness, drowsiness, and difficulty in concentrating.

Benzodiazepines are a class of medication that is used to treat conditions such as anxiety and insomnia. They work by having a sedative effect on the central nervous system. Such medicines that can cause drowsiness and sleepiness can worsen these effects when taken with Seroquel.
Seroquel and Xanax (which belongs to benzodiazepines), when taken together, can interact with each other and cause dangerous side effects such as the worsening of dizziness, drowsiness, and sleepiness.

Operating vehicles and heavy machinery in such a situation can prove life-threatening.

Quetiapine also interacts with other benzodiazepines such as Klonopin and Valium. When Seroquel and Klonopin are taken together, it can cause dangerous interactions by worsening the side effects of drowsiness and dizziness. The same kind of interaction is observed in the case of taking Seroquel and valium together.
Ativan is another benzodiazepine, which, when mixed with Quetiapine, can cause dangerous interactions. The combination with Ativan can cause excessive sedation, confusion, dizziness, and lack of coordination that can put the patient’s life and the lives of other people around him at risk.

SNRIs (Serotonin-norepinephrine reuptake inhibitors) are a class of antidepressant drugs that are used to treat different types of depressive disorders, including anxiety, OCD, social phobia, ADHD, and depression along with the treatment of long-term, chronic pain. They work by affecting brain chemistry and help to regulate mood. Seroquel mechanism of action is relatively similar since it also works by restoring the balance of neurotransmitters in the brain.
According to this study about Quetiapine augmentation in depressed patients on SNRIs, it showed an improvement in depression when Quetiapine was combined together with SNRIs. Cymbalta and Seroquel, when taken together, complement each other well with mild interactions. The side effects of sleepiness and drowsiness may increase a bit, but not to that extent, which can become dangerous. However, in some cases, this combination of Seroquel and Cymbalta can cause serious interactions.
When Seroquel and Effexor are taken together, they can increase the risk of an irregular heart rhythm that can be quite serious. Although it is a rare side effect, the possibility of such a dangerous interaction is present. 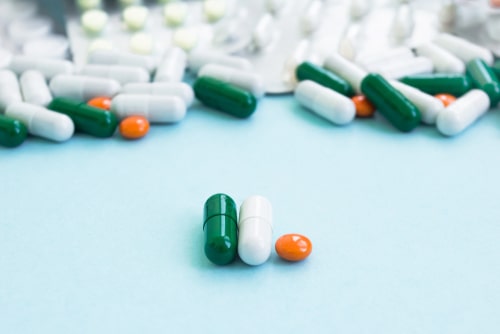 Taking Zyprexa and Seroquel together can result in a slight worsening of the side effects, including weight gain. A doctor may prescribe these two medications together if he believes that the patient will benefit from this combination as compared to taking any of them alone. However, losing weight on Seroquel and a combination with another antipsychotic drug can become a challenging task.

SSRIs are selective serotonin reuptake inhibitors that are used as antidepressants for the treatment of various depressive and anxiety disorders. SSRIs work by increasing the levels of serotonin (a neurotransmitter) in the brain. Through recent studies and research, it is shown that combining quetiapine with SSRIs can prove to be beneficial in treating neuropsychiatric conditions such as depression and schizophrenia.
An extensive study was carried out to determine the safety and efficacy of using quetiapine with SSRIs on patients of major depressive disorders. Through this study, it was concluded that quetiapine and SSRIs are well-tolerated, and no significant drug interactions were found:

Quetiapine drug interactions can appear with certain other drugs as well. Some of these interactions may be mild and can be well-tolerated if Seroquel XR dosages and the doses of other medications are taken as prescribed by the doctor. However, in some cases, drug interactions of Seroquel with other medicines may be severe, which should be avoided entirely. 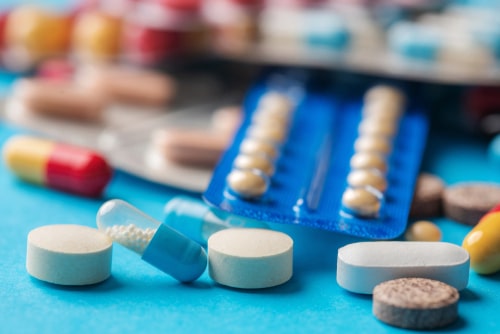 Some of the medicines that cause mild or no drug interactions when used with Quetiapine are listed below:

Some of the serious Quetiapine drug interactions with other medicines are further described below:

Adderall belongs to the drug class called stimulants, whose objective is to boost dopamine levels. Quetiapine, on the other hand, is an antagonist of serotonin and dopamine. Thus, both Seroquel and Adderall are opposites of each other. Taking them both together can cause severe interactions since both will be working to negate the other’s effect and can send the brain transmitters into a frenzy.

Lithium is commonly used for the treatment of manic depressive disorders and bipolar disorders. When lithium and Seroquel are combined together, it can cause serious drug interactions. It can lead to delirium and acute lithium intoxication, which can be avoided by not taking these medicines together.

Benadryl is an antihistamine that is used to treat allergies and to induce sleep. Since Seroquel also causes drowsiness and sleepiness, taking Seroquel and Benadryl together can worsen the side effects and cause dangerous interactions. Severe side effects such as dizziness, dry mouth, reduced heart rate, confusion, blurred vision, and fever may occur.

Tramadol is an opioid that is used for chronic pain medication. Taking tramadol and Seroquel together can cause serious interactions resulting in severe side effects such as seizures, respiratory distress, coma, and even death. Similarly, Methadone is also an opioid. Taking Seroquel and methadone together can cause serious drug interactions and should be avoided. It can cause increased sedation and a dangerously slow heart rate.

Caffeine has been shown to interact with certain drugs. However, Quetiapine has not been established to be one of them.

Seroquel works well with some medicines, whereas it can cause serious drug interactions with others. The combined effects of some medicines with Seroquel can cause an overdose of Seroquel that could result in severe side effects.

Patients who are on Quetiapine should always inform their doctor about using this drug so that the doctor can prescribe medicines that do not interact with quetiapine. The doctor can guide patients about what drugs should not be taken with Quetiapine along with other substances that should be avoided while on Seroquel.

Quetiapine should always be taken according to the dosage prescribed by the doctor. Some people abuse it also by crushing and snorting Seroquel pills. This behavior can increase the risk of overdosing and should be avoided. Snorting or taking large doses of quetiapine may be a sign of addiction to this drug. This condition should be examined by an addiction treatment expert as soon as possible. If it takes place in a patient, they will be sent to a rehabilitation facility where they will get help to overcome the addiction successfully.