Addiction Resource » Drugs of Abuse » Salvia » How Long Does Salvia Stay In Your System?

Salvia Drug Test: How Long Does It Stay In System?

Salvia or magic mint is the common name for the hallucinogenic plant Salvia divinorum. It is a short-acting hallucinogenic herb. It is listed as a Schedule 1 controlled substance in many states owing to its potential dependence and physical and mental addiction. Due to the rising risk of magic mint abuse, its legal status is restricted in 22 states in the USA and its abuse is being closely monitored. Testing for magic mint addiction is taking place at various companies before employment and at the government level to reduce its use. Due to its legal disparity and ambiguous legal status, one might wonder how long after can the plant show up on the Salvia Drug Test and how long does Salvia stay in the system?

Like any other drug, many factors influence how long Salvia stays in the system. These factors include body mass, dosage and duration, a person’s metabolism, health status, previous medical condition, and co-administered drugs like alcohol.

This plant is a short-acting hallucinogen. It exerts its effect by converting into its active component, Salvinorin A, this active component is responsible for the psychoactive properties of the herb. It has hallucinogenic potency similar to LSD.  Salvinorin A has no structural resemblance to any known hallucinogen and it has a unique mechanism of action. It acts by exerting potent selective agonist activity on k opioid receptors also known as KOR. These receptors are entirely different from the receptors acted on by other opioid-acting drugs. These receptors have a powerful nerve-cell activating capacity which is responsible for its hallucinogenic effect. It has no efficacy for any other psychoactive receptors such as the serotonin receptors which are usual molecular targets for other hallucinogenic drugs like LSD. This is why its effects experienced by users are different from other opioid receptor agonists as well as hallucinogens. 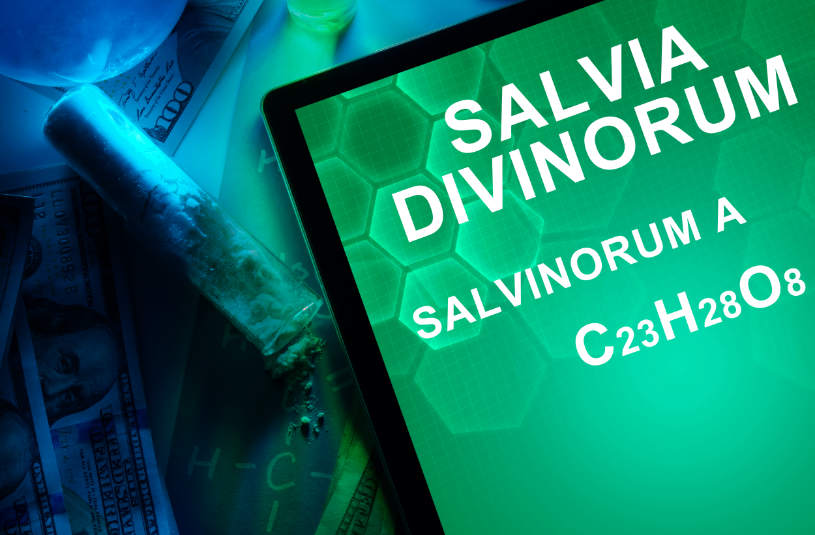 A drug’s half-life means how long it takes for its concentration in the system to drop by 50%. One of the new studies about the effects of Salvia divinorum on opioid receptors has reported that the Salvia half life is between 40 and 90 minutes. It depends on the variability of Salvinorin dose, the potency of the substance taken, and pharmacokinetics. Right after that, the body begins to eliminate the substance through urine. However, this does not mean it has completely been removed from the body. Its presence is still detectable several hours later in the blood, through specialized Salvia drug tests.

Salvia divinorum testing is considered to be somewhat complicated. This is because standard routine drug tests are not so capable of catching the active ingredient inside the product. Specialized Salvia drug tests are not widespread and usually are only available in states where the plant is fully criminalized. The only exception is certain government organizations like the US Army and its branches that banned the use of the substance. They can perform screenings across the country. It is not included in the usual 5 and 10 drugs panel for employment. 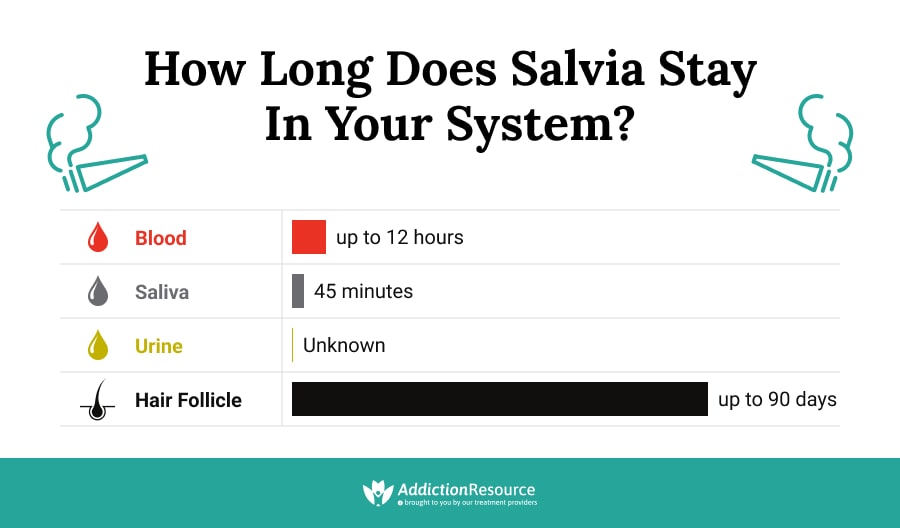 Detection of Salvinorin in the body is an expensive and uncommon procedure.  Specifically ordered drug test has to be done in a short time immediately after its use as it has a very narrow detection window owing to its short half-life. Salvia drug test can detect it in blood for up to 12 hours. In usual cases, it is very hard to detect even its trace amounts after 12 hours. Furthermore, the absence of extensive research means little to no information on how long it takes for Salvinorin to show up on drug tests.  It can be detected by Salvia drug testing in oral fluids for 45 minutes. It gets degraded and absorbed quickly because of its short half-life. Hair testing is not a reliable way of Salvia drug testing because of how quickly it leaves the system and only chronic abuse shows up in hair.

Factors Affecting How Long Salvinorin Stays In The System

Like any other drug, many factors influence how long divinorum stays in your system. These factors include body mass, dosage and duration, a person’s metabolism, health status, previous medical condition, and co-administered drugs like alcohol.

Just as with any other fast-acting drug, Salvia Drug testing is a complicated task. The duration depends on individual metabolism, health, amount, and the form of drug being used. Another factor is the kind of Salvia Drug Test being carried out. The visibility of Salvinorin on drug tests is possible as it can stay in one’s system for 12 hours after consumption. Available Salvia Drug Tests are complicated and expensive which is why they are not done regularly and they have to be specifically requested.

Salvia is not an illegal plant in some states while in some states its use is considered illegal and it is scheduled as a controlled substance. It is one of the most powerful natural hallucinogens which can cause severe physical and psychological side effects. It may also lead to addiction and abuse of sage which can deteriorate one’s health.  Although Salvia testing is new and uncommon, still some employment places and government agencies test for it if they suspect addiction or abuse. This is why the information one can need for its testing is important.

In case one is experiencing troubles regarding Salvia abuse, they should seek medical attention. With the help of specialized professionals, a person is guaranteed to receive the best treatment for drug addiction that produces a positive and lasting outcome. So to be on the safe side, getting detoxed at the drug addiction rehab center is the best option.