Addiction Resource » Drugs of Abuse » What is Kratom? » Overdose

Kratom is a name used to refer to Mitragyna speciosa, a tropical evergreen tree native to Southeast Asia and becoming increasingly popular in the United States. Its active chemical is mitragynine which gives opioid feeling to users, a feeling that can cause addiction. Kratom overdose occurs when this substance is either taken in high quantity or due to Kratom drug interactions that occur when combined with other substances.

In general, mixing Kratom and alcohol at low doses produces mild effects. However, this interaction at high doses can be hazardous. Drinking too much liquor with Mitragyna speciosa products can cause an overdose. One may feel nauseous with some spinning sensations and headaches. Fainting is also very common. Even people who abuse this openly warn about health threats posed by the mix.

Why Do People Mix Kratom And Alcohol?

People mix Kratom and alcohol for different reasons. This way, they can try to reduce alcohol intake, as taking this substance helps decrease the frequency of use of other substances. For some, this mix also helps to treat pain or other symptoms. This is because both substances have a sedative effect. Some users mix the substances for recreational purposes. Sometimes, they can do it accidentally. The half-life of Kratom alkaloids is relatively long, and users can consume alcohol without knowing that the drug is still in their system. No matter the reason, this mix is not harmless and can pose a risk to its users.

Why Is It Dangerous?

Alcohol’s depressive effect can block the transmission of signals from the receptors to the brain. It alters the central nervous system functions. Users may experience loss of senses, difficulty in body movements, and clouded perceptions as a result. 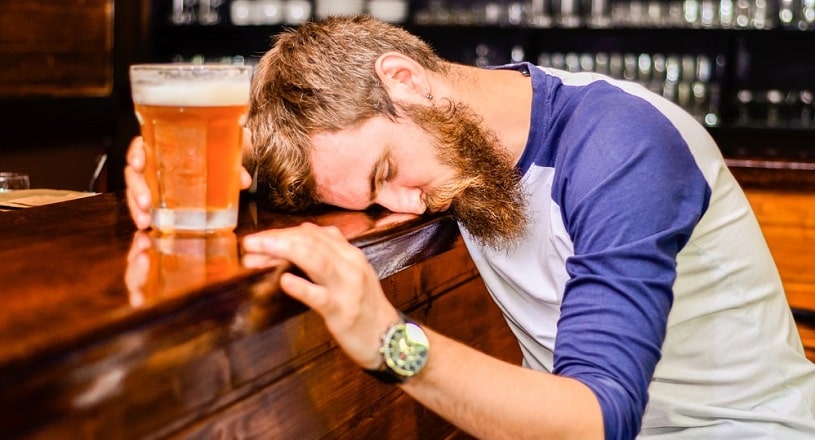 On the other hand, it can act as both a depressant and a stimulator, depending on the dose. Hence, mixing the two is dangerous.

Mitragyna speciosa is not safe on its own, and mixing it with alcoholic drinks can intensify the dangers of this substance and lead to life-threatening conditions. When combined with alcohol, especially in large quantities, this substance can irritate the stomach lining, causing stomach ache, nausea, and vomiting.

Other Common Side Effects Include:

Drinking after using this substance, especially in large doses, results in an overdose.

Not everyone will experience the same side effects. It is difficult to determine the exact symptoms due to the different strains that produce mild to severe adverse effects.

Abusing the herb with alcohol regularly can lead to what is called polysubstance abuse. In this case, the addiction treatment will have to address both substances. Kratom withdrawal symptoms will be accompanied by alcohol withdrawal, meaning it will bring more discomfort than quitting one substance.

Experts know little about how Mitragyna speciosa interacts with substances other than alcohol, including prescription drugs, vitamins, supplements, and herbs. Because it is a legal substance in most states, people tend to assume it must be safe.

While even taken on its own, its safety is debatable, those taking prescription medications should never consider it safe for use.

When weighing the pros and cons of Mitragyna speciosa use, individuals must consider the medications they are taking. There are numerous substance interactions that can have negative and even deadly consequences.

Opioid drugs, like codeine and morphine, have particularly been known to deliver such unfavorable Kratom drug interactions. A study to characterize exposures to this substance reported to poison centers between January 2010–December 2015 was published by the Centers for Disease Control and Prevention, CDC. In this study, 232 of 660 cases involved the use of this substance in combination with other substances like ethanol, narcotics, and acetaminophen. The effects of these ranged from minimal symptoms to one reported death.

Apart from the CDC report, a study was conducted on deaths associated with Mitragyna speciosa use. Of 156 cases, polysubstance use was noted in 87% of these. These other substances used alongside Mitragyna speciosa included alcohol, recreational drugs, and therapeutic drugs.

It is possible to overdose on this substance, especially when abuse is involved. Different factors cause this possibility.

Causes Of Kratom Overdose Include:

Regarding the doses and frequency of use, there could be a wide range of Kratom overdose symptoms, which manifest in various ways.

These Symptoms, Which Indicate a Departure From a Normal State of Health and Are Suggestive of Substance Abuse, Include:

If a person took too much Kratom, they should be taken to an emergency room as soon as possible. Following substance abuse, the first thing to do is contact emergency operators via 911 and follow the operator’s instructions. In the case of overdose, there should be immediate medical attention with further treatment.

Frequently, it is not reported as toxicity, and medical investigation reports the reason for overdose as “acute mitragynine intoxication.” Several fatal overdose cases could be recorded as “Kratom-related deaths.” For now, there is no specific treatment for Mitragyna speciosa overdose; the patients get therapies and medications to ease the symptoms.

According to the CDC report, death statistics show the number of overdose deaths in which Mitragyna speciosa is detected on postmortem toxicology testing. Also, there were cases in which the substance was the only factor that has caused lethal outcomes ascertained by a medical examiner. In 2016-2017 there were 152 (0.56%) of 27,338 overdose deaths in which the postmortem toxicology stated mitragynine-positive results. The number of related deaths was 91 of the 152.

Seven Kratom deaths were determined as those that have happened from using Mitragyna speciosa as the only substance with a positive testing result.

In almost 80% of related deaths, the descendants had a history of misuse, and there is no confirmed information they had addressed the complaints to the medical centers. That is why a timely visit to a drug rehab center can save a life. In general, Kratom-related fatalities were less than 1% of all the State Unintentional Drug Overdose Reporting System overdose deaths from July 2016 to December 2017.

The US Department of Health and Human Services has recommended changing its schedule to the controlled substance of the 1st schedule, making it illegal as heroin and LSD.

How To Prevent Drug Misuse

To prevent Kratom overdose or misuse, use it in small quantities infrequently, avoid mixing with other substances, get it from verified sources who do not sell dubious content or simply stay away from use for more optimal health.

The dangers of Mitragyna speciosa and alcohol use, abuse, and addiction, as well as Kratom overdose, are severe. If this use has started, you can quit by first deciding to stop. Back this decision by making contact with health professionals or therapy centers. This could help you by either giving one-on-one sessions or group therapy at the center, as they deem necessary. They could also prescribe addiction treatment.

Kratom deaths are avoidable, and doing the earlier mentioned is a good way to avoid their occurrence.