15 Warning Signs Of Alcoholism: Knowing When To Stop 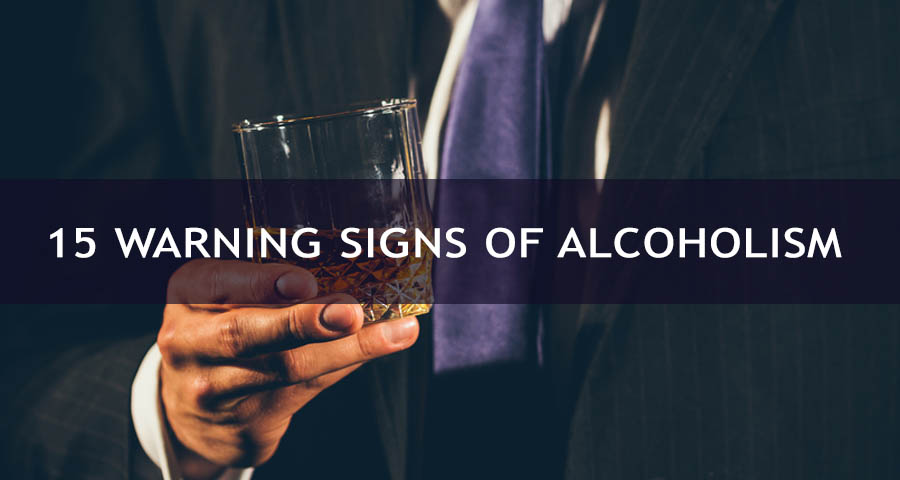 One probably got away with nothing more than a mild tick off from the teacher or parents after getting drunk at a college campus party. One probably doesn’t raise the eyebrows oneself or the roof when a loved one gets drunk at a New Year Eve’s party.
Drinking is socially acceptable in many cultures around the world. This is probably one reason why the signs of alcohol abuse and problem drinking are so often overlooked.
Alcoholism carries a stigma with it. So those who abuse alcohol and their loved ones sometimes find it comforting and assuring to rationalize problem drinking behavior or deny the signs of abuse. It is a dangerous tactic. Both binge-drinking and chronic daily use—whether a person drinks a can of beer or down four bottles of whiskey every day, down tequila shots on the weekend or gulp down a bottle of wine—increase their risk of becoming an addict.

The warnings signs of alcoholism include:

Signs of alcoholism include:

It is important to recognize the warning signs of alcoholism and seek help before it is too late.

The following are the signs to watch out for:

1. Hiding or Lying About Drinking Habits

Those who have a drinking problem tend to hide or lie about their habits hoping that people around them won’t notice or those who are suspicious will be convinced that there is nothing to worry about.

Those with a drinking problem tend to exhibit the following secretive behavior:

If drinking leads to a temporary blackout and an individual emerges from the episode with no memory of it, it indicates that one has been drinking too much. If these episodes are too frequent, they point to a drinking problem.

3. Binge Drinking and Not Being Able to Stop

If an individual can’t stop drinking till they have gulped down a full bottle of whiskey or a whole crate of beer and still crave “one more,” they have a drinking problem. Not being able to control how much they drink is a sign of a problem.

If a person has a drinking problem, they will drink despite knowing about the consequences their actions may lead to. A person will exhibit the following behavior:

Risk-taking behavior indicates that the person is so intoxicated that he is unable to gauge the consequences of his actions or prioritizes alcohol over his well-being or the safety of others.

Those who abuse alcohol tend to dismiss that they have a problem. They do so either to rationalize their actions or to assure their loved ones that their drinking habits are not problematic.

The following are the characteristics of denial:

Alcoholism wreaks havoc on the body and destroys all the major organs. The following are the tell-tale physical signs of alcohol abuse especially when some of them occur together:

When these signs are visible, it is likely that alcohol has already started to affect the brain.

7. Making Alcohol the Focus of Life

Alcohol takes over not only the body of the person but also his mind. The person who has a drinking problem has only one thing in mind—alcohol. Here’s how a person can be preoccupied with alcohol:

People who have a drinking problem often begin to forego their hobbies and favorite activities. It could be the effect of some of their physical symptoms. It is also likely that after overindulging in alcohol-related activities, these people usually have no time or energy left over for their cherished activities.

9. Drinking as an Escape from Problems or Stress

Many people who take to drinking do so as a way to escape from the stressful conditions in their environments or to alleviate negative feelings like depression, frustration, anger, resentment, or sadness.

These are the signs of a possible drinking problem:

According to research, alcohol use disorder can intensify depression. Besides, alcohol abuse creates problems at the workplace or school and home. The user is caught in a vicious cycle where stress aggravates his drinking problem that, in turn, adds more stress in his life.

10. Not Performing to Earlier Standards at the Workplace or in School

Chronic alcohol abuse takes over the life and energy of the user. Focusing on and spending time and energy procuring alcohol and grappling with the physical and emotional side effects of alcohol abuse render a person incapable of performing in other areas of his life.

The following developments may indicate a drinking problem:

Those who abuse alcohol tend to neglect their personal and professional duties and responsibilities. They do so for one or more of the following reasons:

People who abuse alcohol find it difficult to form and sustain relationships. They tend to exhibit the following behavior that strains relationships:

Chronic alcohol use leads to tolerance. This means that a person progressively needs more drinks to be intoxicated. This is a sign that abuse has developed into an addiction.

The presence of withdrawal symptoms is a tell-tale sign of alcoholism. It means that the body has gotten so used to having alcohol in the system that it reacts violently when an individual stops drinking.

The following are the classic alcohol withdrawal symptoms:

Alcoholics are often drunk even in the morning. They have to. To cope with their withdrawal symptoms.

15. Not Being Able to Quit Despite Trying

The physical and psychological damages of alcoholism are well documented. Many with a drinking problem are aware of these consequences and want to quit. Many others want to reclaim their lives, careers, and relationships that alcohol has destroyed. It is a definite sign of alcoholism if a person is unable to quit despite trying hard.

Is it hard to break an alcohol habit?

Yes, it is hard to break an alcohol habit, due to the physical and psychological dependencies that develop. Without professional help, it can be very difficult to quit drinking and further damage to the person’s health, career, and relationships can occur.

Physical and psychological dependence on alcohol makes it difficult to quit the habit without professional help.

The line between problem drinking and full-blown alcoholism is blurred. It does not take many more drinks for a person abusing alcohol to cross the line. Knowing about the early warning signs of alcoholism will help ещ prevent oneself or a loved one from tumbling over the precipice.