The Risks of Drinking Alcohol During Pregnancy

Miranda is not an alcoholic, but she loves a glass of wine. She recently found out that she is pregnant, but she is unsure whether she can still enjoy an occasional drink. She did some online research and found websites that say it’s okay to have a little wine or a beer once in a while during pregnancy.

Miranda wouldn’t mind giving up alcohol for the sake of her baby. But she would also love it if she could drink on certain occasions during her pregnancy. She wants to know for sure. What she and other expectant mothers need to know is that there is no amount of drinking alcohol during pregnancy that is safe and that drinking at all can pose serious risks to the baby.

Alcohol is one of the many substances that can have a severe, negative impact on fetal development. When a pregnant woman drinks, it not only affects her but also all the developing organs in the fetus. And, alcohol stays in the baby’s body much longer.
For this reason, there is no safe amount a woman can drink during her pregnancy. Any amount of alcohol can reach the baby through the placenta and cause serious harm. 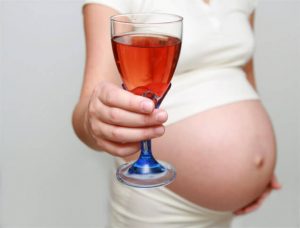 According to the Centers for Disease Control and Prevention (CDC), drinking alcohol during pregnancy can adversely affect the physical and mental growth and development of the baby.
Drinking alcohol during pregnancy is associated with fetal alcohol spectrum disorders (FASDs), a group of irreversible diseases that cause physical abnormalities and impair mental, functional, psychological, behavioral, and cognitive development in the baby.
The statistics on FASDs show that many children are affected by drinking. According to the CDC, two to five out of 100 school-aged children in the United States have a form of FASD. About six to nine out of 1,000 school-aged children in the U.S. are afflicted with fetal alcohol syndrome (FAS), the most severe type of FASD. Drinking alcohol during pregnancy is the only cause of FASDs in children.
In addition to FASDs, there are other dangers of alcohol use during pregnancy:

Fetal alcohol syndrome is one of the most severe potential consequences of combining pregnancy and alcohol. Babies who are born with FAS have permanent damage that ranges in severity but that may affect physical development, physical health, behaviors, intellectual development, and mental and emotional health for their entire lives. 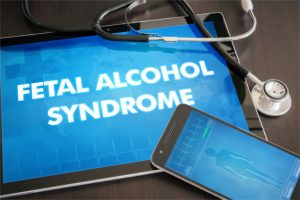 Some of the symptoms and complications of FAS include:

The alcohol effects on pregnancy cause children with FAS to grow and develop more slowly than their peers and to have delayed development of motor skills and language. Moreover, these children tend to have memory problems, learning difficulties, and seizures.
There are no diagnostic tests for FAS; doctors rely on observation of symptoms and information about maternal drinking to diagnose the condition. Early interventions, such as special education services can help a child catch up, but there is no cure or way to reverse the damage caused by FAS. Interventions and treatments for children with FAS include:

In addition to fetal alcohol syndrome, drinking during pregnancy can cause different types of FASDs, such as alcohol-related neurodevelopmental disorder (ARND). It causes neurodevelopmental issues, problems with self-regulation and adaptive skills, as well as behavioral problems. Issues with intellectual development can cause children with ARND to perform poorly in school.
Alcohol-related congenital disabilities, or ARBD, are a group of physical congenital disabilities caused by alcohol. These may include:

Pregnancy and Alcohol Use Statistics

Though many women know drinking while pregnant is not a good idea, many still drink and even binge drink during this crucial developmental period. The CDC Behavioral Risk Factor Surveillance System study found that:

These statistics are surprising and indicate that there may be a lot of misinformation about how much alcohol can cause a miscarriage and other complications. For instance, many women tend to believe that it is okay to drink a glass of wine once in a while during pregnancy. Some doctors may even give the go-ahead to have a drink here and there. And some women falsely believe that it is safe to drink after the first trimester.

There is NO Safe Amount of Alcohol During Pregnancy

Many women want to know, how much alcohol can a pregnant woman safely consume? But, the truth is that there is no safe level of drinking. According to the CDC, any amount of alcohol is harmful to the developing baby because:

When Does Alcohol Affect Pregnancy? 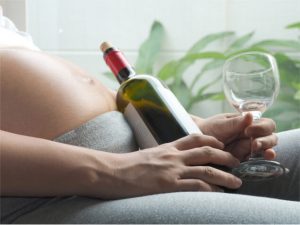 Drinking During the First Trimester

How early does alcohol affect a baby? According to the National Institutes of Health, alcohol is most harmful to the baby during the first three months of pregnancy. The baby’s facial features, anatomical structures, and the brain and spinal cord develop during this period.
An increase in alcohol consumption by one drink per day during the first trimester of pregnancy causes:

According to researchers at the University of California, San Diego, the developing fetus is harmed the most when the mother drinks during the second half of the first trimester.

Drinking During the Second Trimester

There seems to be a popular false belief that drinking alcohol during pregnancy is safe after the first trimester. But researchers warn that the brain and spinal cord of the baby develop throughout pregnancy, so alcohol consumption at any stage can harm the baby. According to theNational Organization on Fetal Alcohol Syndrome, prenatal exposure to alcohol can cause severe neurological defects in the child. Drinking alcohol during the second trimester of pregnancy leads to:

Drinking During the Third Trimester

It is not even safe to drink during the third trimester. During this period, alcohol will only increase the risk of premature delivery and the risk of other complications. In addition to the continuing development of the brain and spinal cord, the baby’s lungs are also maturing during the third trimester of pregnancy. Drinking excessive amounts of alcohol during this period leads to an increased risk of premature delivery and an increased risk of physical complications in the baby that may require longer hospital stays and supervision by a critical care team.

How to Stop Drinking During Pregnancy 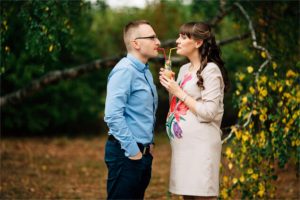 To cut out drinking leading up to and during pregnancy, use some of these tips, and seek professional help if needed:

All women who are pregnant or who may become pregnant need to be aware of the serious risks of pregnancy and alcohol consumption of any amount at any time. There is no safe amount to drink, and alcohol should be entirely avoided.