Addiction Resource » Drugs of Abuse » Trazodone » How Long Does Trazodone Stay In Your System?

Trazodone Half-Life & MOA: How Long Does Desyrel Stay In Your System?

Sold under different brand names, Trazodone belongs to the drug class called serotonin modulators. These drugs are used for the treatment of depression and some doctors prescribe them for patients experiencing insomnia. In 2019, around 24 million prescriptions of Trazodone were issued in the United States. With these statistics, it is important for every patient using this medication to know how this drug works and how long it stays in the system.In this article, information about the Trazodone MOA and its effects, Trazodone half-life, its relation to drug tests, and how to safely remove it from one’s system will be provided.

In this article, information about the Trazodone MOA and its effects, Trazodone half-life, its relation to drug tests, and how to safely remove it from one’s system will be provided.

All medications, including Trazodone, have a mechanism of action: the way the medication acts on the body to produce the desired effects. However, the Trazodone mechanism of action is not perfectly understood. The medical community understands quite a bit about how this medication does work and what are its effects, but as is true for all serotonin reuptake inhibitors, there is still some mystery there.

When studied in animals, what Desyrel does is selectively inhibit serotonin uptake by brain synaptosomes and then amplifies the changes in behavior caused by 5-hydroxytryptophan. It does this by binding to the 5-HT2 receptor. Moreover, how it impacts serotonin depends on the dosage taken; at a low dose, it functions as a serotonin antagonist, while at a high dose it becomes a serotonin agonist. When there is a serotonin uptake (recycling), the tendency is that serotonin levels might become low and this may lead to depression. Because of this, Trazodone moa works by inhibiting the uptake of serotonin, thereby preventing depression. 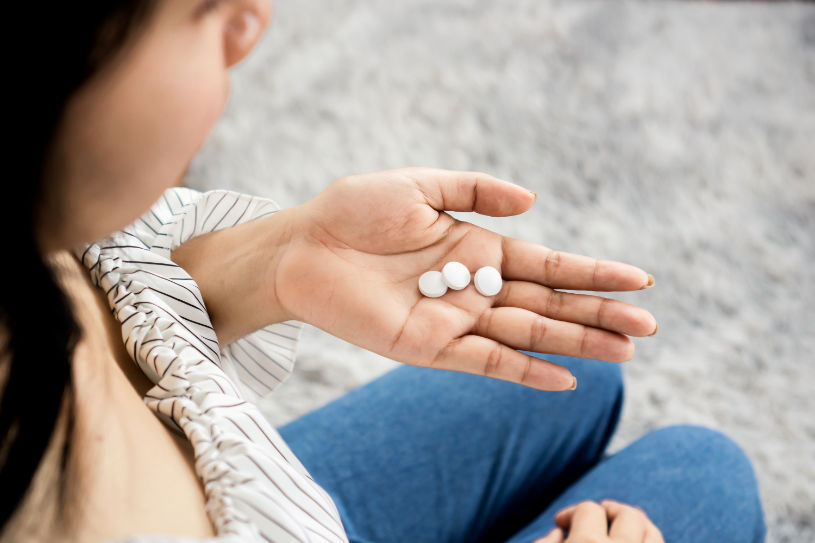 How Long Does Trazodone Take to Work?

Many patients wonder how long does Trazodone take to work. The answer to this depends on what the medication is being used to treat. For example, when treating depression, this medication works in approximately one to two weeks before the benefits are noticeable. But, when treating insomnia, the effects take anywhere from 30 minutes to a couple of hours. While the Trazodone mechanism of action results in effective treatment for many, it is not successful in every case. Patients should always work closely with a doctor when using the drug.

How Long Does Trazodone Stay In Your System?

If one is wondering, how long does Trazodone stay in your system? The answer may vary depending on different factors such as the dosage of Desyrel consumed and the biological factors of the patient. Moreover, there are different tests where Desyrel can be screened.

A blood test is usually done when there is a suspicion that the person is still actively under the influence of a drug. Every 5-13 hours, the medication loses 50% of its concentration in the blood. Therefore, Desyrel metabolites can be traced in the blood for up to three days.

The parent drug, Trazodone, is eliminated from the body in a maximum of two days, but some of its metabolites can linger for longer. That is why urine tests can trace metabolites even 26 days after the last dose.

Saliva testing can show drug use in the first few hours after administration, a time window that could be missed by urine testing. As of today, there is no study yet about how long Desyrel can stay in the saliva. However, its primary metabolite, meta-chlorophenylpiperazine, often causes false positives on amphetamines and this can be tested in the saliva for up to 3 days.

It is preferably safer to stop Desyrel, like any other medication, for about three months before going for any drug screening, as any substance one takes may remain in hair cells for up to 90 days. The standard hair drug testing offers up to a 90-day window for drug detection. However, when stopping a medication, a doctor’s medical intervention is required. 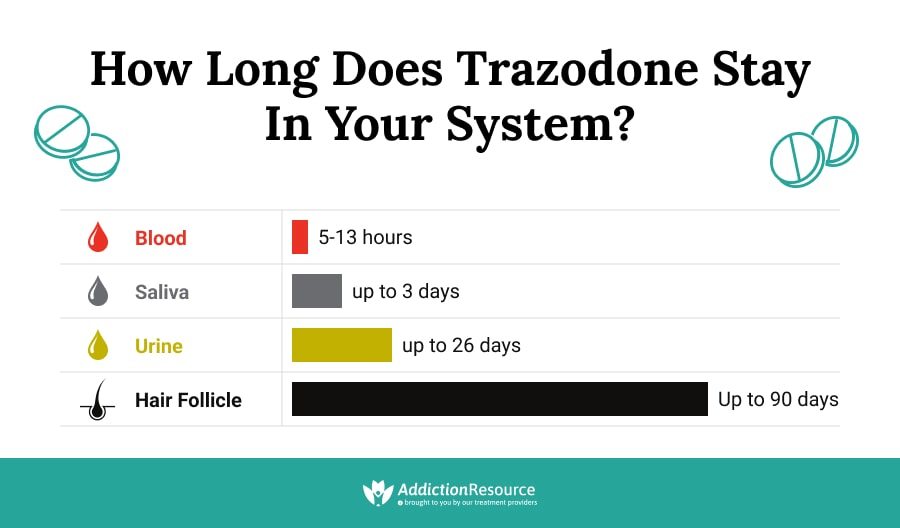 Drug testing is usually used in the workplace, criminal settings, and health care, and has become frequently used over the past ten years. In fact, in the United States, there are different drug-testing programs such as pre-employment testing for job applicants, cause-testing of employees during accidents, and post-employment testing where there is a random call for a drug test. These programs led to an increase in the productivity of every worker. Furthermore, drug testing is mostly done using urine screening because of the ease of sampling.

The false-positive test result is possible with the Trazodone drug. This happens when a drug with a similar chemical structure is fragmented into a component that is similar to the targeted drug. Unfortunately, the screening test sometimes fails to differentiate an antidepressant, such as Desyrel, and crystal methamphetamine. Although Desyrel is not a prohibited substance, one thing to know is that one of its by-products, the meta-Chlorophenylpiperazine, is a powerful hallucinogen and an abused stimulant. In a standard drug test, this compound has the cross-reaction with amphetamines, and this leads to a false-positive result.

Hence, Desyrel is among antidepressant drugs that are highly prone to false-negative results. This result can be affected by several factors such as the quantity of the drug ingested, dilute urine, and the duration between ingestion of Desyrel and the time of testing. According to the study of medical doctors from the United States, 3 out of 6 patients who took Desyrel tested falsely positive for meth.

Moreover, take note that false-positive test results with Trazodone also depend on the dose consumed. According to medical doctors from Boston, USA, consuming 3 micrograms per mL of Trazodone could already yield a false-positive result, owing to the active metabolite mCPP as this has a similar structure with MDMA (ecstasy).

Removing Trazodone From The System Safely

Although the best thing to do is to wait for the drug to be customarily eliminated from the organism, there are some steps to take to make this process faster. Note that this should be done only after asking information from a medical professional about the efficacy and safety of the following suggestions since they might be detrimental for those using other medications besides Desyrel.

Knowing that a Desyrel false-positive test result is a possibility, the worst thing one can do is to stop the medication or even reduce the dosage without medical advice. Even a short-term interruption of Desyrel dosage for insomnia or depression can imply side effects and complications to the health, such as antidepressant discontinuation syndrome or ADS. This syndrome may require drug abuse treatment. Anyone concerned about Trazodone on a drug test should first talk to a health provider so that the drug screen is taken safely and without any stress. The drug rehabilitation clinics also offer detoxification methods to flush the medication from the body faster.