Trazodone Overdose: Symptoms and Other Risks To The Health

Trazodone, sold under the brand name Desyrel, belongs to the drug class serotonin modulators. These medications are intended for the treatment of major depressive disorder. Moreover, when it comes to this drug, toxicity is possible. Although Desyrel toxicity is a rare type of drug toxicity, this can lead to fatality. According to the study of medical doctors from the USA, 9 out of 88 patients who overdosed on Desyrel died and this risk can be increased when people take it with alcohol. Furthermore, this antidepressant medication cannot produce feelings of euphoria, so, toxicity is usually consequent to accidental ingestion or an attempt to expedite relief from depressive symptoms by taking too much of the drug. This separates it from the majority of psychoactive drugs, where toxicities result from addiction or recreational use.

In this article, information about the risk factors for Trazodone overdose, signs and symptoms of OD, Desyrel fatality, and how to treat this toxicity will be provided.

Can One Overdose On Trazodone?

Most people who use this drug have had to ask their doctors at some point whether they can overdose on Trazodone. It is possible to overdose on this antidepressant. However, this is not so common, as, according to the American Association of Poison Control Centers, there is only a 1% rate for people to overdose on this drug. Additionally, the Desyrel drug class, with other different brand names including Oleptro, Molipaxin, and Trazorel has no recreational value, so toxicity rarely results from addiction, abuse, or accidental ingestion. An overdose may, however, result from attempting to cause harm to the health and commit suicide with Desyrel.

Take note that the maximum dose of Trazodone for the treatment of depression is 400 mg per day in divided doses and the maximum dose of Trazodone for insomnia is 25 mg per day. So, any amount beyond the recommended dose for this drug may already cause toxicity. The range of toxicities varies: The trazodone overdose amount of up to 2-3 g may cause respiratory failure and a Trazodone overdose amount of 4-5 g may cause severe CNS depression and coma. Much lower doses produce toxic symptoms when combined with other drugs. If any of these signs are observed, it is important to seek immediate care or help in order to avoid dangerous health events. 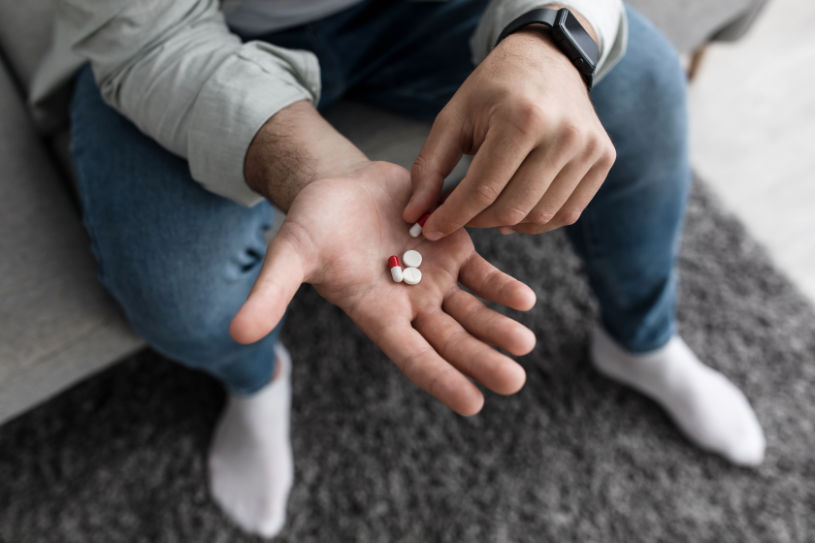 Take note that for all medications, accidental and intentional consumption are not the only factors that can contribute to OD. In terms of Desyrel, drug abuse, personal factors, polypharmacy, and impaired liver or kidney diseases greatly contribute to Trazodone overdose. In this section, these factors will be elaborated on.

Desyrel has no recreational value, and there are no Desyrel addictive effects. Therefore, it is not a drug of abuse, even though it may cause discomforting withdrawal symptoms and psychological addiction to the drug. So, how can the abuse of Desyrel be related to toxicity? When people ingest more significant amounts of the drug than the maximum dose of Trazodone allowed, or when they co-administer the medication with other depressants or drugs that can alter its metabolism, that is already considered misuse and this may cause toxic effects. For this reason, it is a must to strictly comply with the doctor’s medical instructions and policy when using the drug to avoid the occurrence of toxicity.

Age, body weight, and the metabolism of people using Desyrel affect how long it stays in the system. According to the study of medical doctors from Spain, patients ages 18-63 years old who intentionally consumed around 30 mg/L of Trazodone experienced mild and nonfatal toxicity. This means that patients ages below 18 years old and patients above 63 years old are more at risk of experiencing severe and fatal Desyrel OD. Moreover, all age groups must use this drug with care, as this drug may cause weight gain and loss.

Co-Administration with Other Drugs

Desyrel drug interactions are a common risk factor for toxicity. Mixing Desyrel with other psychoactive substances may prolong its stay in the blood. Some of these include alcohol, opiates, and antihistamines such as Diphenhydramine. For instance, Desyrel and alcohol death results from the interaction between both drugs: alcohol prolongs Desyrel’s stay in the system, increasing the risk of toxicity.

Also, Desyrel is metabolized in the liver by the enzymes CYP3A4. Therefore, co-administration with drugs that inhibit the function of these enzymes may cause Desyrel to accumulate in the body. Eventually, this will lead to an increased risk of toxicity. Examples of these CYP3A4 inhibitors include Ketoconazole, Clarithromycin, and Itraconazole. For this reason, every healthcare provider, including pharmacists, must make a policy about the proper dispensing of these types of drugs.

Lastly, take note that Desyrel is a serotonin modulator. This means that it affects the levels of serotonin in the brain. So, when it is combined with other medications that increase the levels of serotonin, such as selective serotonin reuptake inhibitors (SSRIs), a condition called serotonin syndrome may occur. According to medical doctors from Minnesota, this condition will cause too much serotonin accumulation in the body and this is associated with Trazodone overdose.

As mentioned above, the liver is the organ that is responsible for the metabolism of Desyrel. Aside from this organ, the kidney also plays a big role when it comes to Desyrel toxicity as this organ is responsible for 70-75% excretion of the drug. In simple words, the liver degrades Desyrel, and the kidney excretes its metabolites. If the liver’s capacity to metabolize Desyrel or the kidney’s excretory function is impaired, the drug may accumulate in the system, increasing the risk of toxic Desyrel side effects even from a small dose.

Can one overdose on Trazodone and die? Yes, one can die from an OD of this drug and that is why care and caution with the use of the drug are important. However, this is not so common.

Signs And Symptoms Of Desyrel Overdose

There are many signs and symptoms of Trazodone overdose which every patient using the medication must know. Since drug toxicity may also be caused by unintentional ingestion, being able to identify the following signs and symptoms below will be of great help in preventing fatal health events. According to medical professionals from Tucson, USA, the most common sign of Desyrel OD is severe hypotension.

Furthermore, Other Signs and Symptoms of Od Include the Following:

According to the study of medical doctors from California, one of the fatal signs of Trazodone overdose is abnormal heart rhythms or arrhythmias. Patients who are using this medication and are experiencing changes in heart rhythms are advised to seek immediate care as soon as possible in order to avoid dangerous health events. 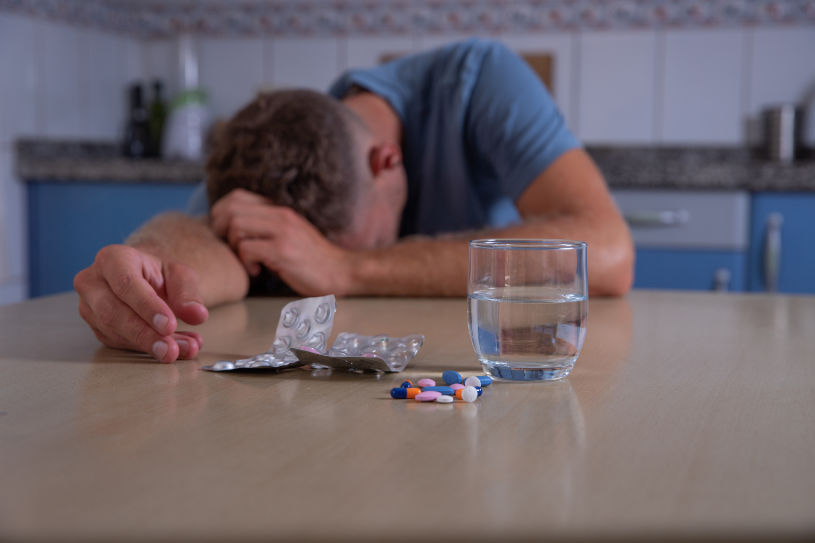 Trazodone overdose death is more likely when it is combined with other central nervous system depressants than when used alone. How the drug causes death is better understood when one knows how it works. It reduces the reuptake of serotonin in the nerves of the brain, thereby increasing its concentration in the brain. This increases the transmission of excitatory impulses in the brain.

One of the significant causes of death from its toxicity is serotonin syndrome. Although rare, serotonin syndrome is a life-threatening condition associated with the use of two or more drugs that increase serotonin concentration in the brain. When serotonin becomes too much in the brain, it causes high fevers, muscle rigidity, abnormal heart rhythm, and seizures, which may lead to death.

There are a few cases of deaths from ingesting Trazodone alone. In many of these cases, the individuals deliberately ingested large amounts to harm themselves. In one report, a 37-year-old woman ingested a Trazodone overdose amount of 6.45 g in a suicidal attempt. The patient developed seizures and severe cerebral edema, which led to her death.

As with most psychoactive drug toxicities, the treatment for Trazodone toxicity begins at the site of the incident. There is no Trazodone antidote. Therefore, time is the best bet in recovering from its toxic effects.

Ensure Emergency Help Is Contacted as Fast as Possible:

To prevent an overdose, ensure to take doses prescribed by the doctor and to check with the doctor before using any other drug with it. Increasing the dosage without the doctor’s prescription may be a red flag for developing an addiction. Contact the rehabilitation facility and get the consultation whether it is time to seek help. The sooner the drug abuse treatment is initiated, the more effective it will be.