Marijuana Withdrawal: What Are the Symptoms and Timeline? 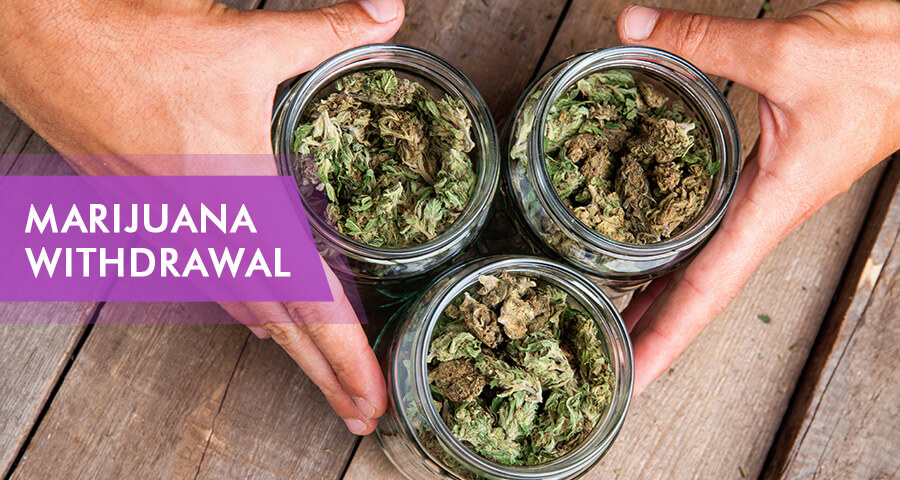 Many people falsely answer the question “Is marijuana addictive?”; this belief comes from the fact that the withdrawal symptoms of marijuana are not as dramatic as other drugs.
But research over the last 15 years suggests that marijuana does have a potential for addiction, especially in teenagers. Current estimates indicate that one out of ten regular cannabis users develops a psychological addiction to the drug.
People who smoke marijuana (or “vape” it using a vaporizer) regularly for long periods of time – several months to years – often experience marijuana withdrawal symptoms when they suddenly stop. And that is a sign of physical dependence.

In a study done on nearly 500 marijuana users who attempted to quit using the drug, about 30% relapsed because the withdrawal symptoms were too much to handle. This result provides some evidence that cannabis withdrawal is a legitimate problem, and that it involves both psychological and physical addiction.

Marijuana does have addictive potential, especially for teens and individuals who frequently use the drug. There are few legitimate studies on the physically addictive qualities of the active ingredient in marijuana – tetrahydrocannabinol or THC. But this is largely because there have been so few legitimate studies on cannabis use, period, due to repressive U.S. federal restrictions that prevented researchers from having access to the drug to test it.
What we do know is that unlike most other drugs, including alcohol, THC is stored in fat cells and therefore takes longer to fully clear the body than other common drugs. This means that some parts of the body still retain THC even after a couple of months, rather than just the couple of days or weeks required to eliminate water-soluble drugs.
Also, we know that addiction is a brain disease, which means that marijuana use chemically alters the brain to make it believe that THC is a necessary substance, one that it not only wants, but needs. These chemical changes are why a person might have uncontrollable cravings to use marijuana, and also why their body may have violent reactions when they stop using it. Such reactions are part of withdrawal, the process that occurs during detoxification or detox, the body’s natural process of removing toxic substances from the system.

THC is the primary psychoactive ingredient of cannabis. If it is consumed repeatedly over an extended period, the brain will develop a tolerance to the drug.

In response to this growing tolerance to THC, the user needs higher and higher doses to achieve a similar effect. The brain and the body become accustomed to regular marijuana intake, and begin to rely on the drug. This is how physical dependency becomes a reality.
From that point forward, the weed user will experience unpleasant sensations when they go too long without the drug: weed withdrawal symptoms.
Fortunately, the drug withdrawal symptoms associated with pot withdrawal are not very dangerous, although they can be unpleasant.

What Are The Symptoms Of Marijuana Withdrawal?

Symptoms of withdrawal from marijuana include:

These sensations are similar to the experience of breaking a tobacco addiction. They are not life-threatening, but can be disruptive enough that the user may have a difficult time being fully functional until the symptoms stop.

The marijuana withdrawal timeline begins one day after the last intake of the drug. The most difficult withdrawal symptoms will occur on the second and third days and may include headaches, cravings, sweating, chills, and gastrointestinal distress. The withdrawal timeline will continue for up to two weeks while the symptoms slowly fade.

The first symptoms of weed withdrawal appear immediately after the active molecules of THC have been processed. The body and the brain expect another dose, having learned to rely on a regular supply of the drug. Not receiving the expected dose of marijuana, the body’s expected chemical balance is disrupted.

At this point, the first symptoms of THC withdrawal begin to kick in, typically several hours after the last marijuana dose, or at latest the following day.

The user will begin to experience:

The period of peak withdrawal symptoms occurs between 48 and 72 hours after the last cannabis use.

Marijuana consumers in that early stage of detox will likely face some unpleasant consequences:

Symptoms start to fade gradually, but some may persist, such as:

After two weeks, most of the withdrawal symptoms should disappear.

However, some symptoms may continue for several months until they fully dissipate. That is especially the case for severe addicts. They can expect:

So the answer to the question “How long does it take to detox from weed?” has to be “It varies, depending on many factors.

Many factors can impact the duration and the intensity of the withdrawal phase. Not every person will necessary experience all the same symptoms as others.

How To Reduce The Weed Withdrawal Discomfort

Fortunately, quitting marijuana is not as difficult as withdrawing from other drugs. Medical supervision is usually unnecessary because the symptoms, while unpleasant, are not dangerous. In many cases, people manage to quit on their own when properly motivated.

Depending on the situation, there is a lot one can do to ease withdrawal period.

What One Can Do At Home

Here is what a user can try at home to soothe milder detox symptoms during weed withdrawals:

How to detox from weed? Will marijuana detox kit help?If one is ready to give marijuana detox a try, start by contacting the people who can help one do it successfully, and with the least discomfort.

Addiction Resource » Addictive Substances: The Anatomy of Drug Addiction » Is Weed Addictive? Marijuana Use, Abuse, and Addiction » Marijuana Withdrawal: What Are the Symptoms and Timeline?