Addiction Resource » Drugs of Abuse » Is Marijuana Addictive? » How Long Does Marijuana Stay In Your System?

Marijuana Half-Life: How Long Does Marijuana Stay In Your System?

There is no single, strictly-defined window for marijuana detection. Although it’s a common belief that 30 days is enough to get clean, in reality, it’s not as simple as that. So how long does marijuana stay in your system?

Many variables influence whether or not one’s cannabis consumption can be detected and when. One will find a general guide on how long weed stays in the body here, but keep in mind that these factors vary from person to person.

How Weed Can Be Identified In System

Each of the screenings has its own advantage. But the Substance Abuse and Mental Health Services Administration (SAMHSA) recommends the urine analysis, so that test is typically applied.

The experimenter must determine the cutoff concentration (the threshold level) of the researched substance. The conventional cutoff for urine analysis is 50 nanograms per milliliter. But they can vary between 15-100 ng/mL.

In fact, examiners often repeat urine exams. The first time typically has a cutoff of 50 ng/mL, and the second examination, as a confirmation of the first, usually has a cutoff of 15 ng/mL. Any of these exam methods could be used at any time, hence ensuring that the system is completely free of drugs.

Testing for Immediate Use

When it comes to testing for weed intoxication, blood and saliva tests are sufficient.

Blood Serum Test is the easiest to implement. It is often used as an investigative tool in car accidents. However, THC does not bond with blood cells and does not stay in the blood for long, so it can only check for active intoxication.

Saliva Test is the most recently-developed and is not yet as common as a blood check. It is often used by police, however, because it is relatively quick and easy to undertake. The weed chemicals fade from the system after several hours, so this assessment is primarily used in accident investigations.

Testing for Past Use

The study of past marijuana use utilizes very different types of screening. By that time, THC will have completely decomposed in its metabolites, so what the tests look for is the THC-COOH molecule.

Hair Follicle Tests provides the most accurate results. Its principal benefit is that it can detect traces of marijuana many months after the last pot consumption as cannabis stays in hair for long. A single hair from anywhere on the body is sufficient for a hair drug test. The major inconvenience of the test is its price – a hair follicle check is the most expensive marijuana test.

Urine Test is the most common method used to screen for the presence of cannabis in the body. The screening is very simple: urine samples are examined in a laboratory and checked according to a chosen threshold level. If the degree of the targeted chemical (usually THC-COOH) is higher than the standard threshold, the test returns positive. 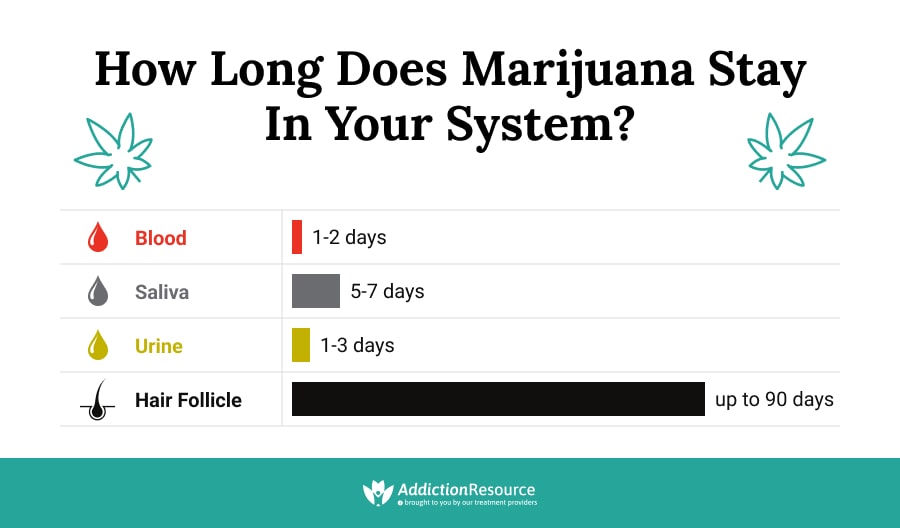 How Long Does Weed Stay In Your System?

Marijuana, due to its high solubility, stores in various fluids and tissues of the body and breaks down at a varying period of time. Detection times for marijuana vary from test type.

How Long Does Weed Stay In Your Blood?

Marijuana can be detected in the blood of a user within seconds of the first use. Depending on the frequency and duration of use, it can be detected for 1 – 2 days or up to 25 days in some chronic heavy usage cases, i.e., multiple doses in a day.

How Long Does Marijuana Stay In Your Urine?

How Long Does Weed Stay In Your Saliva?

When smoked or ingested, the metabolites of marijuana remain in the saliva. Smoking marijuana can result in a positive test for saliva of occasional users for 1 to 3 days, while for a chronic user, it can be from 1 to 29 days.

How Long Does Weed Stay In Your Hair?

The average growth of human hair is around 0.5 inches a month. Hair follicles measure drugs’ use during the past 90 days by using a 1.5-inch piece of hair close to the scalp.

How Is Marijuana Metabolized?

There are many different names for marijuana; however, the compounds responsible for cannabis high are the same: tetrahydrocannabinol (THC), cannabidiol (CBD), and their metabolic byproducts (metabolites). Most drugs have water-soluble ingredients, so drinking water theoretically helps to flush the drug out of the system quickly.

But that is not the case for marijuana metabolites. All of its chemicals are fat-soluble, meaning that they accumulate in fat cells throughout the body, and water will not eliminate them from the system. 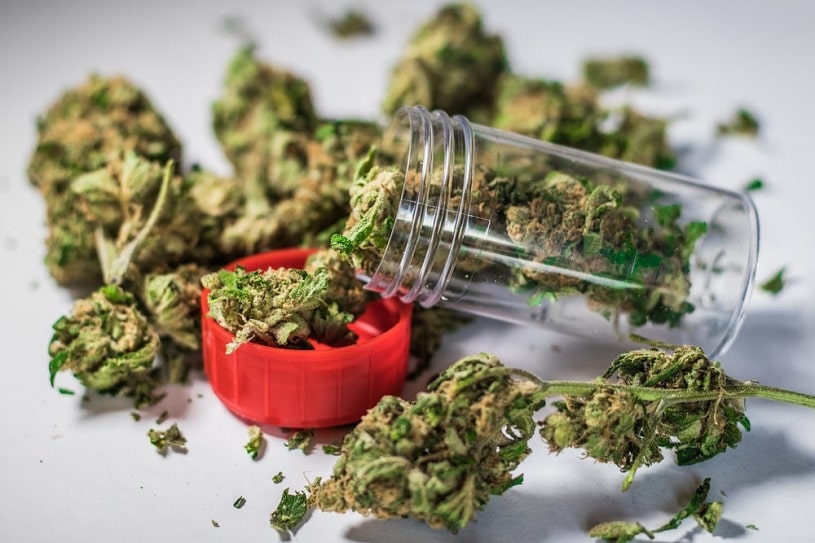 After the liver processes the primary compounds of cannabis, they are divided into metabolites. THC, for example, produces the metabolite 11-nor-delta9-carboxy THC-COOH. These metabolites, being fat-soluble as well, can stay in the system and be detectable in a marijuana drug test for weeks and even months.

They can remain dormant in fat cells and become reactivated due to the person’s behavior (e.g., running, changing the diet). This means that one can turn out positive even if a person has only smoked a small amount of weed, and was in recent weeks.

After inhaling cannabis smoke, THC levels rise for several hours. During that time, the presence of THC in the user’s body is easily detectable, even after a single inhalation. THC (or THC-COOH) concentration drops over time but remains detectable for quite a long time, even after the individual stops using marijuana.

Factors that influence a marijuana drug test result include the frequency of consumption, individual physiology, user lifestyle, and the type of compound. Essentially, since THC metabolites are stored in body fat, the amount of body fat a person has determines how long cannabis is detectable.

Despite the standards set by the SAMHSA regulating urine analysis, the results can still be difficult to predict. Since each exam type has a different detection window, there are other complications to consider when predicting how long marijuana can stay in the system.

First-time or occasional weed smokers can expect to test positive on a marijuana test for up to three days. By day four, no traces of cannabis should be detected in urine below the typical threshold of 50 ng/mL.

Regular and frequent cannabis users that consume marijuana for pain from time to time can usually be positive for up to a week after the last use. After ten days, these people’s chemicals will not be visible at the standard 50 mg/mL threshold. However, in extremely heavy and long-term use cases, users can find marijuana in their systems for up to 70 days.

Lifestyle choices can be highly influential for the storage time of metabolites in one’s body as well as marijuana half-life. If the body has more fat cells due to lifestyle, their body can store more marijuana metabolites and for longer periods. People who eat a lot of fatty foods and do not exercise will likely store more metabolites than their peers. Moreover, sport and exercises can cause the release of THC metabolites from the fat cells, which can result in a positive drug test result.

The standard test usually focuses on analyzing THC or THC-COOH. This means that people consuming a cannabis strain dominated by cannabidiol (CBD), or hemp oil, are less likely to test positive in a marijuana test. Hemp oil still contains small amounts of THC, so if a person consumes huge quantities, they may test positive for THC. Given all these variables that can influence a drug test, the results are often unpredictable and sometimes even surprising.

Second (or Third) Hand Smoking and Cannabis In System

There are large populations of dedicated weed consumers who are compelled to engage in public weed smoking. The conversation revolves around non-weed smokers who often find themselves in public places where weed smoking occurs. So a logical question would be: “is it possible to test positive for THC through second hand or even third-hand inhalation of marijuana? 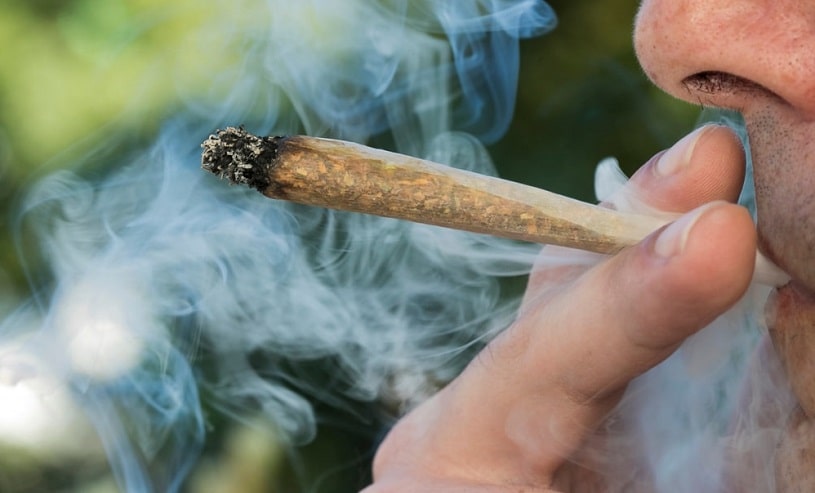 It has been confirmed that second-hand smoking can lead to a positive result for THC. This is because exhaled smoke contains reasonable amounts of cannabinoid metabolites, which are the main components of weed. This is especially possible in a poorly ventilated room or air deficient spaces. A person who may have been involved in second-hand inhalation of smoke- fumes from weed may need marijuana detox before going for a drug test.

Thus, it is challenging to say exactly how long the drug will stay in a user’s system. It depends on various factors, including metabolism, body fat, frequency of consumption, etc. Moreover, being stored in the body’s fat cells, THC metabolites can remain in the system for large amounts of time. The most effective way not to test positive in a marijuana drug test is to quit the drug before the addiction develops. Continual indulgence in the drug increases tolerance, addiction levels and leads to substance abuse, that carries a risk of weed overdose.

Treating substance abuse requires a lot of commitment and professional help. There are quite many facilities today offering in-house treatment and all forms of addiction treatment programs. There are a lot of free drug addiction rehabs, especially in the United States. These facilities provide programs to get all the help individuals may need.