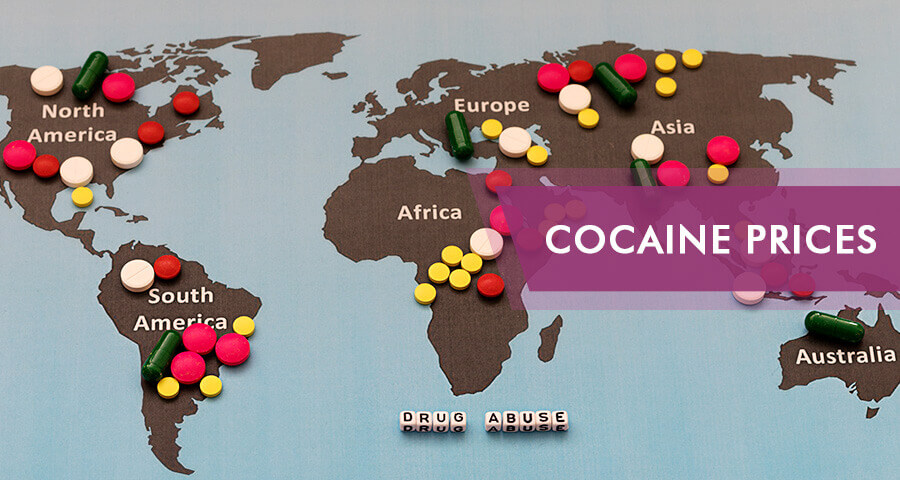 Before we get into the talk about actual cocaine prices, it is important to note that in the last decade a new trend in drug trafficking has arisen.
While drug trafficking was always associated with shady backstreet meetings and gang conflicts, it has started to make a shift off the streets and into the online world. This does not mean that we will be able to find eBay-like websites all over the web, but it can be found on the Internet.
This being said it is important to make a distinction between street-bought and internet-bought cocaine as there are several factors that influence price ranges in both cases.

Where Is The Cheapest Cocaine?

When it comes to buying cocaine from a dealer, the most price determining factor is the geographical location, or rather the country in which the buyer is in. If we start from the bottom, the lowest cocaine prices are found in Bolivia, Colombia, and Peru. The reason for this is the fact that these countries are the biggest cocaine producers in the world. The product bought here does not have to go through several customs and then through several dealers’ hands before getting to the customer. This means that the purity will remain high without impacting the price. But what does that mean, when it comes to hard numbers? It means that, on average, a gram of cocaine in these countries goes for $3.5 to $4.5 USD. There are also different values for 8 ball of coke, which is a popular way to count the price of the drug.


Despite cocaine is cheaper in some countries, it is still illegal to buy it for any purposes.

So why is cocaine considered the most expensive “party” drug on the planet if an average person can get their night’s supply for less than $2? The answer is obvious if we look to the other side of the price list. As much as cocaine is cheap in the South American countries, it is much more expensive in Europe and Australia. Besides, there is a connection between the drug’s availability and history of cocaine.
To put the numbers in perspective, the same gram of coke that costs $4 in Columbia, costs $80 in France and as much as $300 in Australia.
The reason for this is that getting cocaine out of the original country of production and exporting it to another one is very difficult. Considering how much cocaine can be acquired in some countries it may seem that customs officers aren’t doing anything to prevent this, it is a very laborious process to smuggle in a large quantity of coke. The almost ten times higher cocaine prices in Australia and New Zealand are due to the fact that these two countries are essentially islands with very heavy security on their borders, making smuggling anything across their borders almost impossible. Unsurprisingly, The Netherlands and Portugal are amongst the cheapest countries in Europe to buy cocaine. This is likely due to their liberal views on drugs. They both also poses many ports, ready-made for trans-Atlantic trade with South America. In any case, buying cocaine is legally prosecuted.

Prices Of Street-Bought Cocaine By Country

Still, the prices of cocaine vary and even the lovest one is not a reason to buy the drug as it is highly addictive, and its abuse entails legal consequences as well.

How Much Cocaine Does The Average Abuser Consume?

All cocaine begins as a mere leaf on one of the four coca plants in the Erythroxylaceae family.
Coca leaves themselves are just a mild stimulant that is chewed or brewed to suppress hunger or fatigue, something that is carried out by thousands daily in and around the Andes. Less than 1% of the leaves actually contain the alkaloid that is needed to produce cocaine.
A kilo of cocaine requires nearly a ton of fresh coca leaves to be produced. These leaves are then dried out. At sources in Colombia, Peru or Bolivia they usually cost between $400-$500.
If a farmer then went through the process of turning that leaf into a base paste then the value would double to around $800-$900 when sold to drug traffickers. Many people in South America actually smoke the base paste which is arguably even more addictive than crack cocaine itself.

The price of cocaine continues to rise throughout the process and by the time it is turned into cocaine and shipped abroad, it can cost a staggering $10,000-$20,000, depending on the nation it is shipped to and, of course, what is cocaine made of.

Once cocaine reaches dealers, in the US for example, it can be worth as much as $70,000-$80,000. If cut up into grams then up to $150,000, which highlights the substantial difference in price for cocaine throughout the process, despite its gradual loss of purity.

Coca cultivation in Colombia is arguably the biggest industry in the country. Colombia produces more coca than the second and third biggest producers (Peru and Bolivia) combined. Despite the incredibly high market and value of what the plant is to become, in Colombia many farmers actually trade it for daily food and goods, such as a supply of fish or meat. Many of these farmers are living in poverty, despite the high value of what they are selling. This is due to the cartel’s ability to demand a consistent price, and being their only buyer.
On behalf of the cartels, the traffickers may then sell the coca paste locally or turn it into cocaine for even higher profit. Local coca base paste brings in considerably less income, however, is much easier to sell and there is less to the process. Selling coca as the base paste is often chosen as a last resort.

Since the primary cocaine trading route has changed, from the Caribbean to Mexico, Colombian farmers have been making considerably less money from their cocaine production, due to the influence of the Mexican cartels. This change was enforced on Colombians because the route through the Caribbean was much easier to monitor than the one through Mexico. However, because the Mexican cartels began to assume more responsibility for the cocaine, they then demanded more money. Furthermore, this gave them more influence. This influence has led to their even bigger involvement in the cocaine trade within South America. Therefore, they can increasingly force prices and production to be on their terms.
The increased Mexican influence isn’t popular with farmers or Colombian authorities, who had previously been making efforts to put an end to the cocaine business. However, they now have far fewer resources than those they are trying to stop.

Cocaine Prices in the US – A Monopsonistic Situation

During the last two or three decades in the US, cocaine prices have rarely fluctuated very far from the $150 per pure gram mark. It is likely that the main reason for this is that cartels in South America, that most US sellers buy from, are monopolizing their markets demand, otherwise known as a monopsony. They are the producer’s only buyers in the region, therefore they can dictate the price they are willing to pay, regardless of restraints placed on the growers. Simply put, if they don’t buy the cocaine, nobody will. This means that the cartels are the only way for coca farmers to make a living. Therefore, any pressure or crop interruption from authorities are usually only temporary as the farmers will grow crops again to restore their income. However, the attempt to cut off the cocaine supply doesn’t hurt the cartels at all, merely farmers trying to make a living.

All this aside, buying and selling cocaine over the internet is becoming more popular with every passing year.

Why Would Anyone Buy Cocaine Over the Internet?

People buy cocaine over the internet for multiple reasons:

However, buying cocaine is banned by law and entails criminal liability.

While this may not seem like too much of a difference, it is very important to note that almost all well-reputed online vendors have their cocaine imported directly from the producing countries. This means that the purity of cocaine bought from the internet far exceeds that of its street-bought counterpart. Many vendors go as far as to send their product for a monthly purity testing by a third party laboratory, whose results are publically accessible by anybody once the test is completed.
This means that internet-bought cocaine usually has the purity of over 85% often exceeding 90%. The purity of street-bought cocaine usually falls below 50% and rarely exceeds this number. If we put all of this data into a simple calculation, we get that street-bought cocaine of the same purity as internet-bought cocaine costs around 55% more. There are some tricks to identify whether one bought real or synthetic cocaine.
The downside to this method is having to learn quite a lot of technical tricks and what to look out for so as to not accidentally reveal one’s identity over the Internet.

No matter the method of purchase cocaine remains one of the most expensive drugs on the planet. Aside from a select few countries that have a steady supply, its price continues to fluctuate due to the ever-increasing harshness of customs controls. Drug-fighting law enforcement is also constantly fighting to keep it from leaving the production countries. Sadly, the increasing prices and difficulty of obtaining the drug have hardly diminished its popularity in today’s culture, and there are still many individuals left with crippling addictions after irresponsible use.