According to a survey done on more than 46,000 individuals, almost half of all 12th graders admitted to having used an illicit drug at least once in 2012. Among the many used substances, Marijuana takes the top spot for teenagers.
On average, the age at which Marijuana is first used is 14, while the first alcohol intake occurs at 12.
Often, teenagers use illegal substances due to peer pressure, to feel better amidst different life challenges or to experiment. Environmental factors, such as having parents and relatives who use illegal substances, are substantial contributors as to why teenagers take on the habit themselves. There are too many reasons why and how a young adult may begin his or her addiction early on, and it is vital for parents to do their part in preventing any form of addiction that will damage their children’s lives.

Getting involved in illegal drugs is dangerous. It does not only put the individual’s health in jeopardy but also risks his or her future in jail. There are plenty of negative implications in drug abuse, which happen long before and after the person use the substance.
Knowing common street names for illegal drugs will not only help to understand drug addiction and its harmful effects. It is very useful in determining whether a loved one is hooked, or about to get hooked on drugs. Being aware of the many different names and terminologies used in activities related to drugs is tantamount to drug abuse and addiction prevention at the earliest possible time.

Why should One know the common drugs street names?

People should know the common drugs street names because it will help them determine if a loved one is using illegal drugs. Knowing their names is also a way of preventing drug abuse and addiction at the earliest possible time.

Street Names Used for the Most Common Drugs 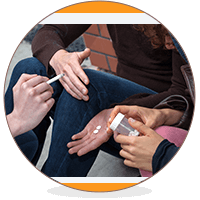 Due to the illegality of drug abuse, people who buy and sell them use highly variable terminologies to avert law enforcement, concerned citizens, parents, and teachers. Every day, the list of street names for the following substances increase and change; nonetheless, familiarizing oneself with the following will enable one to know if a loved one is involved in drug abuse.
Cocaine – Also known as candy, coke, C, girl, freeze, Mama Coca, nose, shot, snow, pimp, sugar, white powder, and sweet stuff, Cocaine is a very powerful stimulant that is injected into the blood stream using a syringe or snorted through the nose. Cocaine causes increased heart rate, excitement, body temperature, blood pressure, alertness, and energy. It lessens one’s appetite, increases metabolism, and puts the user at high risk of psychosis, schizophrenia, panic attacks, and other serious medical conditions.
Heroin – The most popular and abused opiate, heroin is used through smoking, snorting, or injecting into the vein. Heroin is also called big H, capital H, Aunt Hazel, dope, Charley, China White, H, hero, the good horse, hard stuff, little boy, perfect high, mud, stuff, tar, and smack. Using heroin can cause the person to feel relaxed after experiencing a short period of euphoria. The mouth is dried up, pupils are dilated, and the skin is flushed. When the drug is in full effect, the person feels drowsy, senses are impaired, and others experience vomiting and diarrhea.
Marijuana –Street names of marijuana include boom, baby, chira, aunt Mary, grass, ditch, herb, ganja, hash, pot, Mary Jane, rip, weed, nigra, stack, root, torch, skunk, zambi, and many more. These street names are used to market the drug and its use in the streets.
Although the drug has been legalized in some parts of the country, and other parts of the world, Marijuana remains an illicit drug in most states. To continue its marketing and use in the streets, Marijuana is also referred to as boom, baby, chira, aunt Mary, grass, ditch, herb, ganja, hash, pot, mary jane, rip, weed, nigra, stack, root, torch, skunk, zambi, and many more.
The effects of marijuana vary among users, depending on the amount that was taken, the psychological condition and mental state of the individual, and the like. Nevertheless, the most common effects are relaxation, euphoria, altering of the senses, paranoia, increased heart rate, appetite, and panic.
Methamphetamine – A stimulant that makes the user feel energized, methamphetamine is also called meth, crank, ice, jibb, speed, glass, tina, chalk, fire, crystal meth, or crystal. Meth is sold in crystal, powder, or tablet form, and used via smoking, snorting, or swallowing.
Studies have shown that methamphetamine has a specially addictive property that exceeds most other stimulants and puts the user at risk of developing violent behavior, depression, psychosis, and other mental conditions that may end up in death and suicide.
Inhalants refer to readily available and highly addictive substances like paint thinners, nitrates, spray paints, lighter fluids, helium, whipped cream, propane, and cleaning agents. They are also called bolt, bullet bolt, air blast, boppers, discorama, laughing gas, heart-on, huff, honey oil, whiteout, moon gas, thrust, satan’s secret, and hardware.
Depressants include barbiturates, alcohol, and benzodiazepines, which sedate or tranquilize a user’s senses. In the black market, they are referred to as blue heavens, green dragons, backwards, downie, idiot pills, peanut, m&m, drowsy high, no worries, stoppers, tooles, red bullets, yellow, and stumbler. The most popularly purchased commercial brands for depressants, which are prescribed for persons with certain mental conditions, are valium, xanax, Nembutal, and Amytal.
Hallucinogens – Aside from Marijuana, there are many other hallucinogens that are sold in the streets. They include mescaline and Peyote, which are also called cactus, buttons, and mesc; lysergic acid diethylamide which is also known as acid, blue heaven, white lightning, microdot, and sugar cube; hashish or hash; psilocybin, also called shrooms or magic mushrooms; and amphetamines called ecstasy, essence, adam, MDM, PMA, 5-DMA, STP, TMA, DOM, EVE, DOB.

What is the drug called Candy?

The drug known as Candy is cocaine, a very powerful drug injected into the bloodstream or snorted through the nose. Its other street names include coke, C, girl, freeze, Mama Coca, nose, shot, snow, pimp, sugar, white powder, and sweet stuff.

What to Do When Suspecting Drug Addiction?

If someone hears any of these terms from the teenager or loved one, it is imperative to seek medical help immediately. Drug addiction develops quickly, and once it happens, it becomes harder to stop in the long run. No matter the stage or degree of addiction, finding the right inpatient treatment where the loved one will receive proper care and support is the most effective way to help him or her stop abusing any addictive drug.
Inpatient rehabilitation centers enable the patient to focus on the treatment, undergo continuous therapies, and get external support from people who are trained in addiction treatment. Drug addiction can start very early in life, but more than that, it can be treated without delay, with the right actions and choices.