Every year, tens of thousands of Americans die through suicide. Also, much larger numbers of people attempt to kill themselves or experience suicidal thoughts. There is a demonstrated connection between alcohol dependence (i.e., alcoholism) and the chances of thinking suicidal thoughts, attempting suicide, and committing suicide. This means that anyone with alcoholism may have an increased level of risk. However, the link between suicide and alcohol is complex. Factors that can play a part in any given situation include genetic tendencies, personal background, and various types of environmental stress. Alcohol tends to play a contributing role in suicidal behaviors, and relatively few people attempt to end their own lives with a purposeful alcohol overdose.

Key Statistics on Alcohol and Suicide

Every few years, the CDC compiles figures on the number of Americans who die from factors related to alcohol use. The agency breaks these factors down into acute (short-term) causes and chronic (long-term) causes. Suicide is one of the most common forms of acute, alcohol-related death. The CDC’s most recent available statistics show that only poisonings not stemming from alcohol use occur more often. 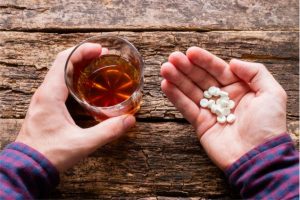 However, the use of alcohol as a direct means of intentional death is not that common. Compared to the overall number of alcohol-related fatalities, suicide by alcohol overdose — or any other cause directly related to drinking — ranks low as a contributing factor. Instead, most affected people kill themselves in different ways while under the influence of alcohol.
There are several reasons why people under the influence of alcohol might think about killing themselves. Examples of these reasons include:

Alcohol use may also increase the risks for a fatal outcome in people who decide to make a suicide attempt. In these situations, a person under the influence may rely on drinking to:

Depression is well-recognized as a contributor to suicidal states of mind and suicidal behavior. Unfortunately, people affected by alcohol use disorder (alcoholism and non-addicted alcohol abuse) have increased chances of developing depression symptoms. The National Institute on Alcohol Abuse and Alcoholism reports that major depression, the most severe form of depressive illness, occurs in people suffering from alcoholism roughly 3.8 times more often than in people not dependent on alcohol. People suffering from non-addicted abuse experience a much smaller bump in their significant depression risks. 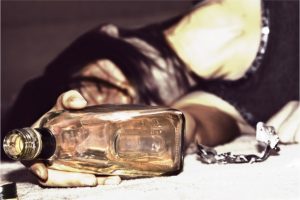 Suicide tends to run in families. People whose bloodlines include relatives who tried to kill themselves are more likely to act suicidally and end their lives. The same family factors hold in cases of alcoholism. People whose bloodlines include relatives affected by alcohol dependence have increased chances of becoming dependent themselves. In both cases, some of the risks stem from cultural influences. However, genetic predisposition also plays an important role.
Research shows that alcoholism and suicidal tendencies are interlinked in complicated ways. For example, common genetic factors can make it more likely that the same person will develop both alcohol problems and suicidal thoughts and behaviors. Many shared environmental factors also help explain the connection. In addition to the presence of depression or some other form of mental illness, these factors may include:

The connection between alcoholism and suicidal behavior also appears to have roots in alcohol’s damaging effects on healthy brain function. People who habitually consume excessive amounts of alcohol experience a lasting disruption in their typical levels of several essential chemicals. These chemical disruptions affect several of the brain’s most important regions, including the cerebral cortex, limbic system, and cerebellum. Also, nerve cells in these regions can shrink by a considerable amount in anyone who drinks heavily for years or decades. Specific emotional/psychological consequences of these brain changes include:

Any of these problems can increase suicide-related risks, and in combination, they may have an even more significant effect.

Alcoholics may also have increased suicidal tendencies as a result of heavy drinking’s impact on stress regulation. Stress is a known contributor to substance consumption and substance abuse. Many people begin a pattern of excessive alcohol consumption because they are looking for some way to keep their stress-related feelings under control.
In the short run, this approach may appear to work. However, eventually, the brain of a habitual heavy drinker will change its response to the presence of large amounts of alcohol. Among other things, this altered reaction can include a spike in the output of hormones that increase stress levels. In turn, an inability to relieve stressful feelings may make suicidal thoughts or behaviors more likely.

The Link Between Binge Drinking and Suicide

Another potential factor in alcohol-related suicide is a dangerous pattern of consumption known as binge drinking. Binge drinkers distinguish themselves from other alcohol users by imbibing beer, wine or hard liquor at a pace that leaves them legally intoxicated in anywhere from less than an hour to two hours. The Centers for Disease Control and Prevention identify increased suicide risks as one of the known consequences of this type of rapid drunkenness. This is likely true because people who binge on alcohol experience a sped-up version of some of the mentally impairing symptoms of advanced intoxication. 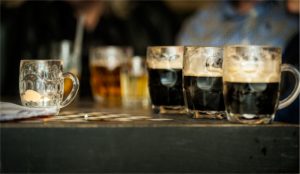 Most drinkers who kill themselves do not use alcohol as their short-term method of choice. Intentional suicide by alcohol poisoning is relatively rare, although suicide by pills and drinking may occur more often. Alcohol use tends to form part of a larger picture of suicide-related factors, and people typically have multiple conscious and unconscious reasons for killing themselves. Still, research demonstrates a clear link between alcohol abuse, alcoholism, and increased chances of engaging in suicidal thinking, suicidal planning, or outright suicidal behavior. 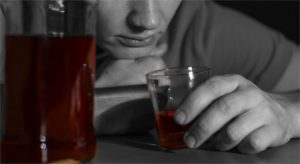 In any given case, it can be difficult to say exactly what role alcohol plays. Nevertheless, alcoholism leads to brain changes that could set the stage for suicide-related actions. Some of these changes are chemical, while others involve physical alterations in the brain’s shape and size. Also, alcoholism often co-exists with depression and other mental health conditions known to increase the odds that people will try to kill themselves. In light of these facts, successful alcohol treatment could play an important part in suicide prevention.