Diphenhydramine Side Effects. Is Benadryl Safe During Pregnancy?

Diphenhydramine, the active compound found in over-the-counter Benadryl, is a   first-generation antihistamine primarily used to treat seasonal allergy symptoms such as sneezing, as well as itching and watering of the eyes, nose, or throat. However, due to its mechanism of action, and the time Benadryl stays in the system, it can have other less desired effects on health. These effects can be particularly undesirable for some subset of patients, such as those women who are pregnant or breastfeeding. Read further to find out more information about various Diphenhydramine side effects and warnings, and how they can be managed and minimized, as well as whether or not Diphenhydramine can be used in special populations, such as pregnant women and women who are breastfeeding.

There are numerous Benadryl side effects, that a person may experience because of diphenhydramine overdose, or due to drug intolerance.

Diphenhydramine(DPH), is the active compound found in Benadryl. In addition to its antihistamine activity used to alleviate symptoms and signs of seasonal allergy, it also has potent anticholinergic action. Anticholinergic, means that DPH blocks the effects of acetylcholine. Acetylcholine is a neurotransmitter found within our Autonomic Nervous System, neuromuscular junctions, and at various sites within the Central Nervous System. It is the anticholinergic property of this medication that most of the undesirable Diphenhydramine side effects can be attributed to.

There are numerous Benadryl side effects, that a person may experience because of diphenhydramine overdose, or due to drug intolerance. However, as Benadryl is an over-the-counter medication that is not specifically regulated by the U.S Food and Drug Administration(FDA), accurate statistical information regarding Benadryl side effects is lacking. Regardless, information still exists from various organizations, but the incidence rate is unfortunately unavailable.

The Most Commonly Encountered Mild Reactions, Of Which the Statistics Are Known, Include:

Patients have also self-reported the following symptoms, but their incidence and prevalence rates with DPH use are unknown, thus making it difficult to establish a true causal relationship between medication use and their emergence. Nonetheless, they merit a mention:

Moderate and Severe Benadryl Side Effects

If patients are using Benadryl for an allergic reaction, and experience any of the following moderate to severe Benadryl side effects they should consult their medical doctor or contact emergency medical services to minimize injury to their health:

Effects of Long-Term Diphenhydramine Use

The information regarding the effects of prolonged Benadryl use is once again not known, as prospective studies analyzing its prolonged use do not exist. There are some exceptions to the above statement, however, the following are related to the long-term use of any antihistamine medication and anticholinergic drugs, not just DPH.

One study reported a positive association between chronic antihistamine use and the risk of developing malignant gliomas, which are the most common primary brain tumors in adults. 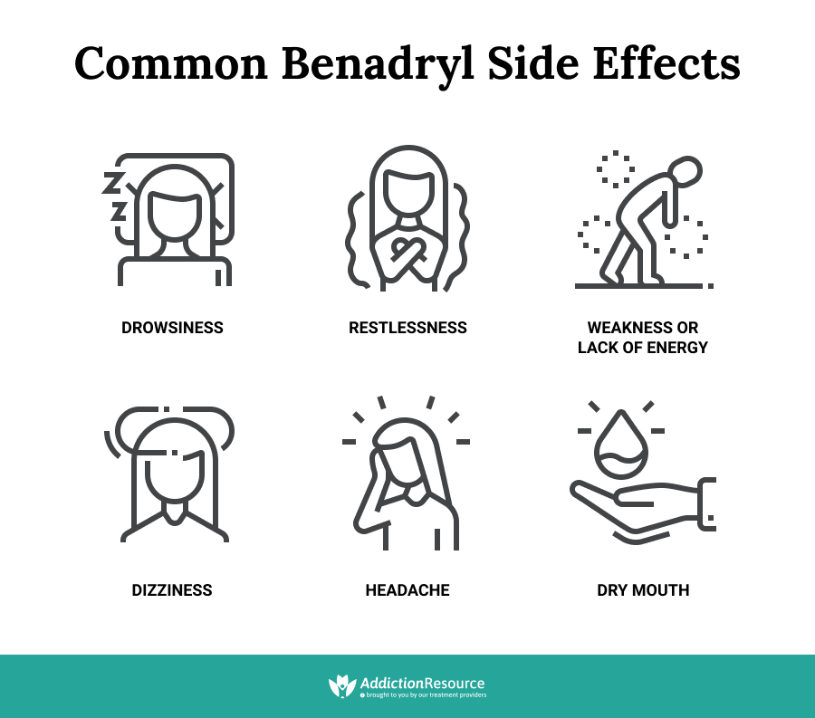 Use Of Benadryl While Pregnant

Allergies are pretty common during pregnancy. It is reported that 20-30% of women who are of childbearing age are affected by allergies, and in a subset of women, pregnancy can even aggravate some preexisting allergy symptoms such as allergic rhinitis. As a result, antihistamine drugs are often employed to treat these allergic symptoms. This gives birth to a question of whether the use of antihistamines or specifically Benadryl while pregnant is safe?

Thus, the short-term use of Benadryl while pregnant under the supervision of a qualified medical doctor is relatively safe. However, it is not recommended to use Benadryl during the last trimester of pregnancy, due to the possible risk of developing fetal ocular birth defects associated with the proliferation of fibrous tissue immediately behind the lens of the eye, leading to blindness. Due to this, during the last trimester of pregnancy, the American College of Obstetrics and Gynecology suggests substitution with a newer generation of antihistamine such as Loratadine, or any other diphenhydramine alternatives.

The current data suggest that first-generation antihistamines, like Diphenhydramine, are minimally excreted in breast milk. As such, a short-term or occasional combination of Benadryl and breastfeeding, would not be expected to cause any effects in breast-fed infants. Regardless, the overall or regular combination of Benadryl and breastfeeding is not recommended, as some mothers reported irritability, drowsiness, and unusual excitement in their infants after the use of antihistamines. Thus, it is preferable that alternatives, such as loratadine, be considered if symptomatic relief is required. As always, a physician should always be consulted and the need for DPH use should be weighed against the risk of development of Benadryl side effects in infants and the benefits of breastfeeding.

Due to potent anticholinergic properties, there are several health-related Diphenhydramine warnings and precautions patients should be aware of before using it. Furthermore a person should always consider dangers of Benadryl interaction with other drugs.

Pediatric Use of Diphenhydramine

As per the FDA, non-prescription allergy or cold medications containing Diphenhydramine should not be used in children less than 6 years of age due to the possibility of causing paradoxical CNS stimulation or seizures.

Diphenhydramine should not be used in the elderly as they are particularly susceptible to its  anticholinergic properties and the associated adverse health effects( falls, cognitive dysfunction, delirium, loss of independence), their clearance of DPH is lowered, and the risk of drug-to-drug reactions is particularly high.

Patients with bladder obstruction, urinary retention, gastrointestinal obstruction, or benign prostatic hypertrophy should avoid Diphenhydramine use, as its anticholinergic properties can worsen these conditions and cause detrimental effects on the patient’s health.

Metabolism of Diphenhydramine primarily occurs hepatically. Thus patients who have liver disease, may not be able to metabolize DPH leading to its accumulation and development of toxicity. Therefore, a dosage reduction may be needed.

As always patients should not drive or operate machinery until they know how the drug affects them or its effects have worn off.

Certain adverse reactions of Benadryl may affect the normal routines of patients. There are a few ways these undesirable effects can be minimized and managed so that patients can continue with their day-to-day activities in an efficient manner. The following tips can help in managing with them:

Benadryl and Dementia: Is There Any Connection?

Due to their Anticholinergic activity within the Central Nervous System, a possible link has been found between anticholinergic drug use and the development of dementia.

Is Allergic Reaction to Benadryl Possible?

An allergy to a drug used to treat allergies does not seem logical. However, as with all medications, a hypersensitivity reaction is possible. If a person experiences trouble breathing, itching or swelling of the face, tongue, or throat, and severe dizziness he should immediately contact emergency medical services.

A rare side effect of Diphenhydramine use, also related to its anticholinergic property,  is the development of tachycardia or an increased heart rate.

Does Diphenhydramine Cause Weight Gain?

Histamine is one of the regulators of our appetite, specifically signaling satiety or the feeling of “fullness”. Thus, an antihistamine medication interferes with this regulation and causes overeating, leading to weight gain. Furthermore, DPH causes sedation and sleepiness, decreasing the amount of energy and calories we use, which both contribute to weight gain.

What Are The Diphenhydramine Side Effects While Pregnant?

Although pregnancy is associated with numerous physiologic changes and adaptations, the Diphenhydramine side effects are expected to be the same as in those individuals that are not pregnant. As such, the common Benadryl side effects listed above would be experienced.

Does Benadryl Make You Sleepy?

Yes, one of the most commonly encountered effects of Benadryl use is drowsiness and sedation.