How Long Does Benadryl Last And Shows Up On Drug Tests?

Diphenhydramine stays in the system for up to two days. However, this period may change depending on different factors.

How Long Does It Take for Benadryl to Work?

The body absorbs Diphenhydramine in 20-30 minutes via oral administration. According to a study, the initial effects of this anti-allergy drug can be seen within 15 minutes. For injectable routes, according to the United States Pharmacopoeia, this anti-allergy medicine starts to kick in rapidly. For the treatment of skin allergies and related symptoms, topical administration of this medical substance is used, and results will be seen within the day.

Benadryl half-life determines the time after which 50% of the drug is flushed out of the system. Different antihistamines have different half-lives. The half-life of Benadryl ranges from 2.4 hours to 9.3 hours. The median Benadryl half-life turns out to be 4.3 hours in healthy, young adults. Depending on this median value, it can be estimated that the drug will be completely flushed out of the system between 13.2 hours and 49 hours. The concentration of this medical drug is on a maximum level between 2 to 4 hours after taking a dose.

What Factors Influence the Half-Life of Benadryl?

The half-life of Benadryl depends on the age and health conditions of patients. In children, this value is 5.4 hours. For adults, the elimination half-life of this drug is 9.2 hours, whereas, for seniors, this value turns out to be 13.5 hours. 50% of the common side effects of this medicine start to wear off after this elimination half-life. The long-term effects of this drug, however, do not wear off this easily.

How Long Does Benadryl Stay in the System?

After 12 hours of oral administration, half of this antihistamine will be eliminated from the body. According to a study, for an average healthy adult, this anti-allergy drug stays in the body for up to two days. In unhealthy individuals, especially those with liver and kidney problems, this medication stays in the body longer than two days.

Does Benadryl Show Up On A Drug Test?

There is no specific drug testing kit for Benadryl to be detected on a drug test. However, this antihistamine can cause false positives during drug screening and may show positive results of opiates, methadone, and phencyclidine or PCP. According to a study, Diphenhydramine is the medication that frequently gives false-positive results on drug tests compared to the other antihistamines. Below, there is some information about how long does Benadryl last in the urine, blood, and saliva:

How Long Does Benadryl Stay In The Urine?

How long this medicine is detectable in urine depends on its Benadryl half-life. After 1 or 2 days, most of this antihistamine medication will be flushed out of the system. However, urine tests would still be able to detect Diphenhydramine in the urine for up to 4 days after the last dose of Diphenhydramine was taken.

How Long Does Diphenhydramine Last In The Blood?

When a patient takes this antihistamine, it reaches its peak level between 2 to 4 hours in the blood. After 4 hours, the level of this medicine in the blood starts to decrease. After taking the final dose, it will take almost 3-4 days for Diphenhydramine to last in the blood.

How Long Does Diphenhydramine Stay In The Saliva?

The time for which this anti-allergy medicine stays in the saliva is the same amount that it stays in the blood or urine. This is approximately up to 3 to 4 days after discontinuing the drug Diphenhydramine as determined by the elimination half-life of Diphenhydramine. 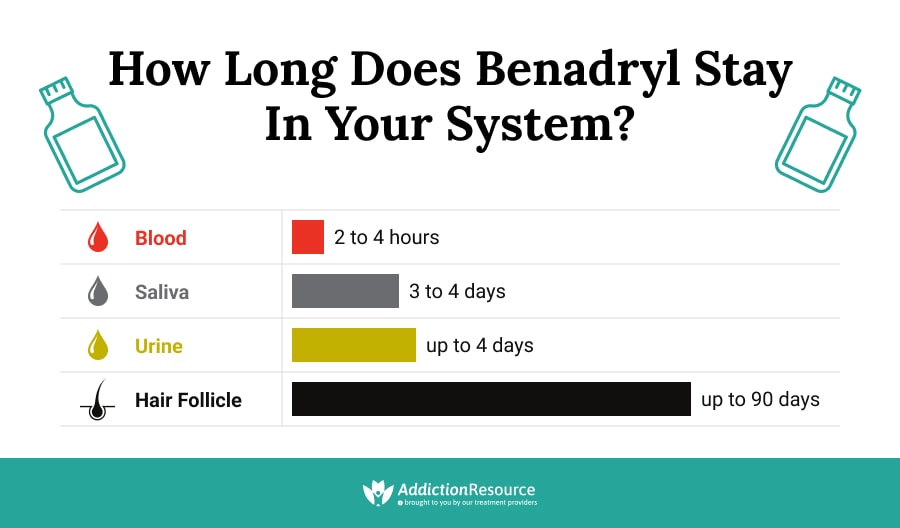 What Influences the Period for Diphenhydramine to Stay In the System?

Diphenhydramine stays in the system for up to two days. However, this period may change depending on different factors. Aside from the route of administration, below are some variables that affect how long this medical drug lasts in the system:

The amount of dose of any antihistamines determines how long it stays in the system. A person who took a higher dose of Benadryl (or overdose) of this medicine for the treatment of severe allergies will most likely take more time to rid of the system from the drug than the person who took a lower dose. For example, a patient who took 100 mg of this medication will still have 50mg of the drug in the system after the elimination half-life time. Conversely, the patient who took a 50mg dose will only have 25 mg in his system after the same amount of time, so it will take less time for the patient who took the lower dose to flush his system out of Diphenhydramine. According to a study, the elimination half-life of Diphenhydramine increases when the dose is increased.

The frequency with which the drug Diphenhydramine is taken also determines the time for which it will stay in the system. The usual dosage of Benadryl suggests it be used every 4-6 hours. Frequent use or overdose of this medical drug affects the time it stays in the system. On the other hand, if it is taken once daily, its effects will start wearing off soon as compared to when taken several times a day. However, taking it once a day may not prove to be effective for the treatment of the condition for which it was prescribed. Depending on Diphenhydramine half-life, this medicine will stay in the system longer if it is taken every 4 to 6 hours.

Interactions With Other Drugs

When Diphenhydramine is used in combination with other drugs, it affects the period of how it lasts in the system. When taken with antidepressants such as Monoamine Oxidase Inhibitors, the anti-allergy medicine increases the time it stays in the system. This results in more significant and prolonged side effects and exacerbation of symptoms as well. Other drugs which interact with this anti-allergy medicine by increasing the time it stays in the system include Lorazepam, hypertension medicines, and other cough and cold medicines. Taking Benadryl and Zyrtec together may also increase the time for the effects of the former to wear off.

Diphenhydramine is used for the treatment of sleep problems and anxiety because of its sedative properties. Irrespective of the half-life of Benadryl, taking it together with alcohol can have extreme and dangerous side effects. This information about the interaction of Diphenhydramine and alcohol is very important because alcohol increases the sleep effects of the antihistamine. Do not use alcohol and Diphenhydramine together as the former slows down the metabolism of antihistamine. According to a study, when this happens, the latter will have more time to stay in the system.

Age plays a crucial role in determining the Benadryl half-life. The information about Benadryl half-life is much shorter in kids and adults as compared to the elderly. In the case of children and young adults, their bodies can rid their system from Diphenhydramine faster as compared to the bodies of individuals aged 65 and above. Additionally, a prescriber will have to use the age of a patient to determine the dose needed.

The overall health of an individual also determines the time for the antihistamines to stay in the system. Since all drugs are metabolized in the liver and excreted via urine through the kidneys, the health of both the liver and the kidneys play a role in this regard. If they are healthy and functioning correctly, they would be able to flush this medicine out of the system faster. If there is some problem in any one or both of them, it will lead to a higher time for the anti-allergy drug to stay in the system. Similarly, for the flushing of Diphenhydramine, the metabolism of an individual also affects it. A faster metabolism rate will lead to faster expulsion of the drug from the body as compared to individuals who have a slower metabolism. 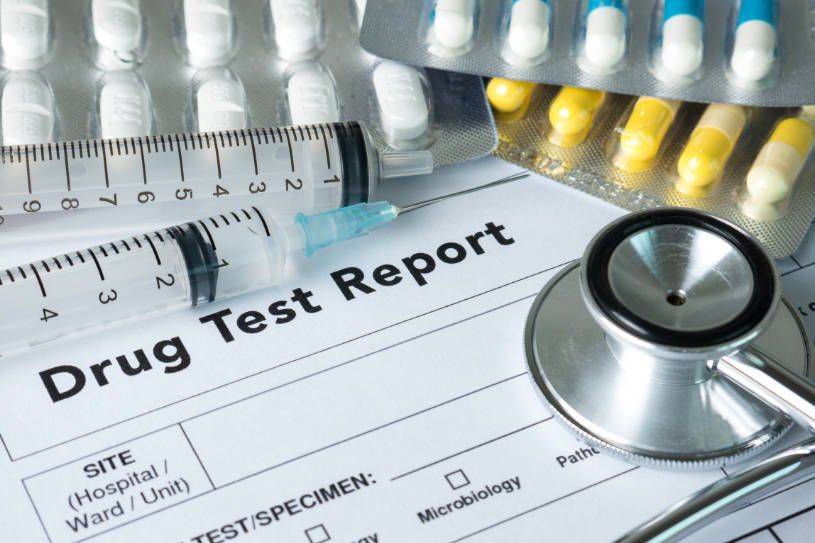 Benadryl detoxification requires a lot of effort, primarily when a patient has used this medication for quite a long time or in overdose cases. According to a study, proper detoxification eliminates withdrawal symptoms. Here are some tips on how to flush it out from the system in a safe and effective way: