Addiction to alcohol and domestic violence or DV are the two main serious problems that plague people all across the globe. The causes of alcohol addiction aren’t fully known but could be rooted in various factors. Violent relationships are one factor that may contribute to an individual choosing to use substances and may lead them to eventually seek treatment for substance abuse and domestic violence. Professional treatment programs are offered at many facilities to help individuals heal from drugs and violence.

This article covers everything related to domestic violence and substance use in detail.

What Is Domestic Violence?

DV is violent behavior committed by someone (partners and ex-partners, family members, family friends, and other relatives) in the victim’s domestic circle. It is a term used when there is a close relationship between the victim and the offender; in this case, the victim is dependent on the offender. It is typically manifested as a pattern of behavior towards the partner in a relationship, where the abuser gains control over the victim. 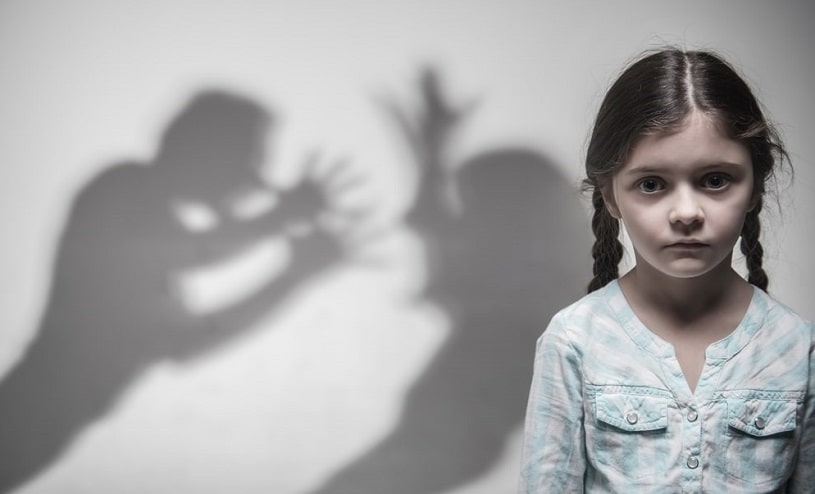 Research also agrees with the connection between substance addiction and domestic violence. Drug and alcohol abusers generally turn violent when they feel out of control. The relationship between alcohol and domestic violence can be seen because moderate drinking shows involvement in intimate violent behavior. However, alcoholism doesn’t always lead to violence. Many people who drink don’t abuse anyone as a result. Similarly, many domestic abusers don’t drink or take drugs.

DV is a severe problem with no religious, cultural, racial, or economic boundaries. Victims of any form of DV can be of any age, sexual orientation, gender, race, or marital status and can represent any socio-economic background and education level. Although violent behavior is known to affect women, men, children, and elders, it is confirmed that women are the most affected victims, with over 1.5 million women assaulted by a partner or loved one each year.

The Causes Of Domestic Violence

There is not a single reason why DV occurs. It can happen as a combination of factors.

Some of Its Common Causes Are as Follows:

Children who grow up in families with violent behavior may suffer from behavioral and emotional disturbances and are more likely to develop abusive behavior later in life. A study has revealed that the risk of being an abuser was positively correlated with reported abuse victim experiences. According to that study, the overall rate of being the victim was 35% for perpetrators and 11% for non-perpetrators.

People diagnosed with any mental illness, like schizophrenia or bipolar disorder, may go through highs and lows when they fail to control their anger and develop aggressive behavior. As a result, the risk of their becoming an abuser gets higher. It is especially true if they are not properly following a medication regimen.

The Desire for Power or Control

DV usually occurs in relationships where an individual has a desire to control another. For example, the abuser may try to control others’ money, social life, and travel. Studies have shown a correlation between individuals exposed to perpetrators attempting to control their lives and those who find difficulties managing family relationships. According to the reports, almost 10-20% of adolescents experience dating violence in general.

There is a connection between the risk of becoming an abuser and low self-esteem. Abusers usually attempt to cover their low self-esteem by degrading or humiliating others. While it doesn’t make sense to people who are affected, it does make sense in the mind of abusers.

children, that most abusers were themselves abused. Victims are likely to develop several problems, just like those who were bullied. These include depression and alcoholism. Such people with substance use disorder are more susceptible to becoming abusive. The need for acceptance or money to support one’s habit may develop an abusive behavior pattern.

Signs That One Is in Abusive Relationship​

Violent behavior and abuse can happen to anyone; however, the problem is often excused, overlooked, or denied, and it is true, especially in the case of psychological rather than physical abuse. The first step to ending abuse is noticing and acknowledging the signs of an abusive relationship.

One Is in an Abusive Relationship If:

Substance-related violence affects individuals, families, and communities everywhere in the world. There is evidence of a connection between excessive consumption of alcohol and violence. Even those who consume moderate amounts suffer from aggressive behaviors.

Alcohol and drug use heightens the risk of violent death and violence between people, including child abuse, violent relationship, assault, homicide, and sexual violence.

Though the link between the use of drugs and violence is not direct, these substances usually cause disinhibition and make people angry or aggressive, which may trigger acts of violent crime. In addition, they may cause or worsen mental health issues and exacerbate any family or social problems.

The relatedness of substance abuse and domestic violence has been well documented. According to one study published in the Journal of Health Care for the Poor and Underserved in 1995, alcohol and violence usually go hand-in-hand. The article described the link between alcohol addiction and domestic violence as a relationship between cause and consequence. Another article shared in the Journal of Substance Abuse Treatment noted that over 75% of individuals who seek treatment for substance addiction report having performed different violent acts, including physical abuse to others. 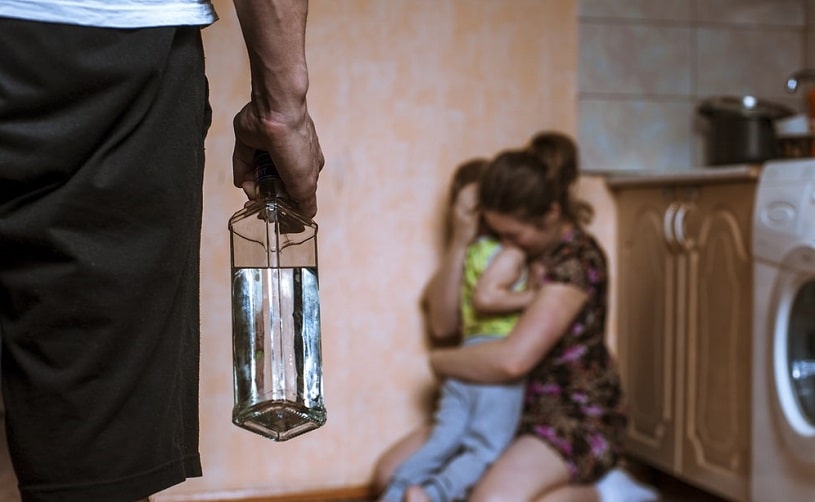 Some researchers suggest that people who control negative emotions and rage might act violently as drinking alcohol can lead to the loss of self-control and make somebody more likely to act angrily. On the other hand, the American Journal of Public Health found that substance abuse tends to be more common among women who suffer violence.

Alcohol and domestic violence are often paired; however, alcohol and violence aren’t directly related. When a person is under the effect of alcohol, they are more prone to lose control and act violently. Consequently, someone who may otherwise be able to control violent behavior will be more likely to show violent behavior when intoxicated. Nearly 55% of domestic abusers were drinking before the incidents of assault, as per the World Health Organization (WHO) estimation. However, there is no consensus on the cause and effect – whether drinking alcohol and domestic violence have a strong connection or alcohol misuse is used as an excuse to justify the violent act. 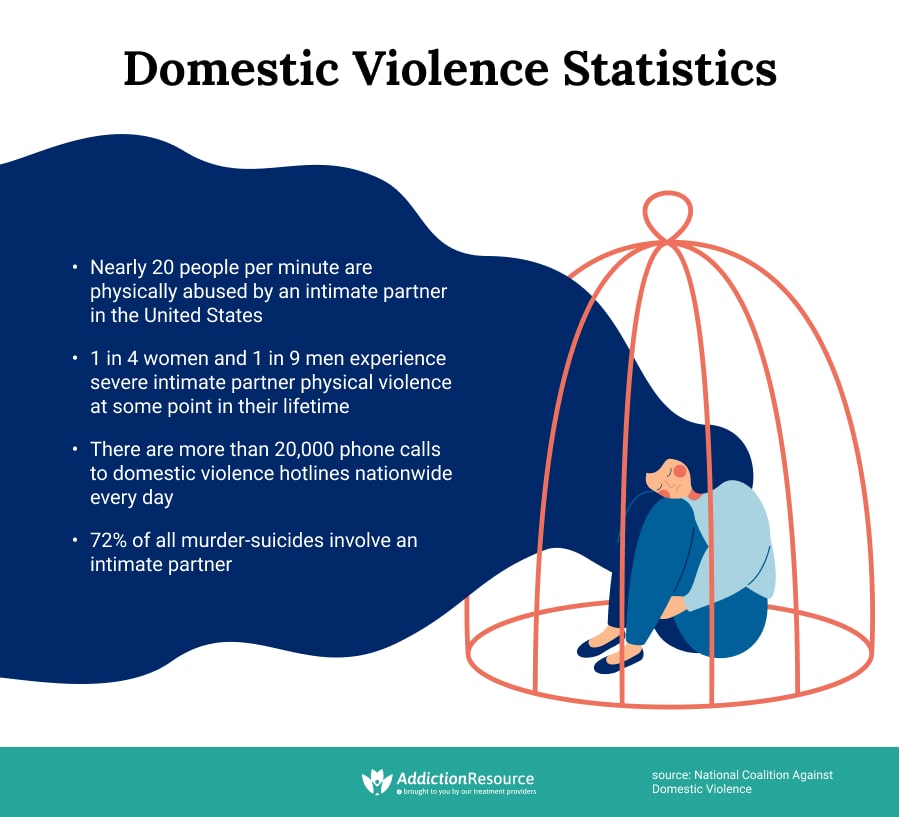 Experiencing violent behaviors can lead to addiction because of how stressful events affect the brain. The brain may repeatedly replay the memory of the traumatic event, and as a result, many survivors turn to alcohol or drugs to find relief. PTSD and substance abuse often come together, and being a victim of violence can become a cause of PTSD. Statistics have shown that abused women are 15 times and 9 times more likely to abuse alcohol and drugs than those with no history of abuse.

The Cycle of Domestic Abuse

The timeline (which ranges from some hours or days and extends to months) and frequency (which occur once a year or once a week) of the cycle stages can vary in every relationship. Unfortunately, many victims don’t contact professionals to seek help hoping that their partner will change in time to come. 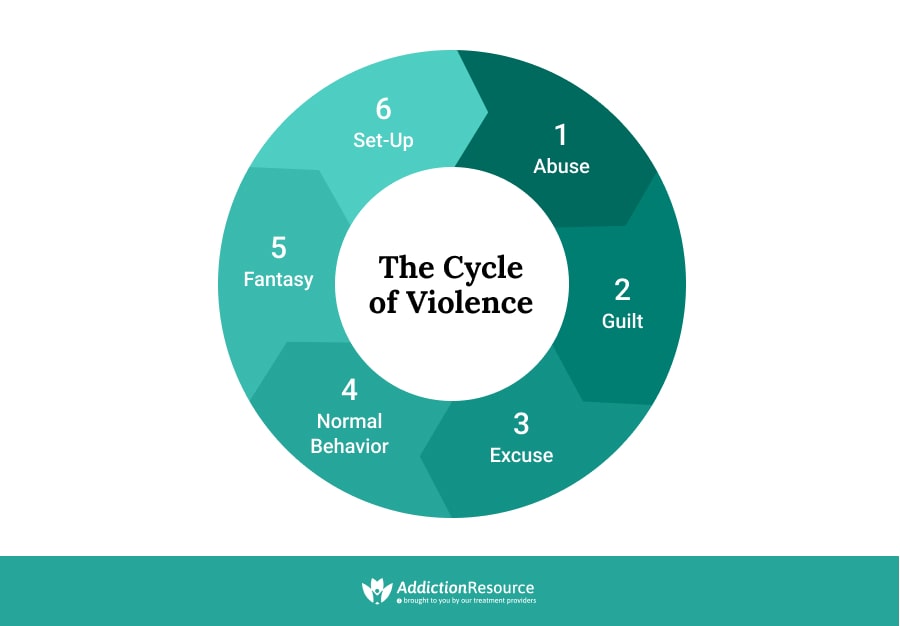 Often, the abuser manifests calm and caring behavior, and the cycle of domestic abuse makes it hard to realize that this is a serious issue that needs to be addressed. The cycle of violence in domestic abuse falls into different stages or a common pattern.

These Stages Are Listed Below:

In this stage, an abusive partner comes out and shows his aggressive, belittling, or violent behavior. The stress from everyday life (including work, children, worries, and finances) begins to mount and increase in the abuser and create tension and pressure. They begin to feel angry towards the victim, and they will feel as if they should not have met the person.

After the abuse stage, an abusive partner feels guilt. Although this guilt is not about what they have done, they will feel bothered about the possibility of being caught in the long run and being allowed to face the consequences for their abusive behavior.

In this stage, the abuser rationalizes what they have done. The abuser may come up with different excuses for the fights, physical altercations, and violent outbursts they have caused. They may even blame the victim for the abusive behavior. This way, they are not trying to be responsible for the violence or damages they have caused.

After the excuse stage, the abuser goes into the “normal” behavior stage. In this stage, the abuser will look for all the possible means to regain control and keep the relationship in perfect working condition. They will try and convince the victim for another chance. However, they generally exhibit guilt over their previous actions and promise never to do it again.

The abuser begins to look for a way to abuse again. In this stage, the abuser will start collating all the wrongdoings and look for a way to make a victim pay. They will then create a plan to turn the fantasy into a real abuse scene.

After the fantasy and planning stage, the abuser sets a victim up and puts their plan into action. This way, they will set a victim up with a situation where they can give a good reason for their abuse. This whole cycle of abuse shows how difficult it is to leave an abusive relationship. The abuser shows many loving gestures between the stages. 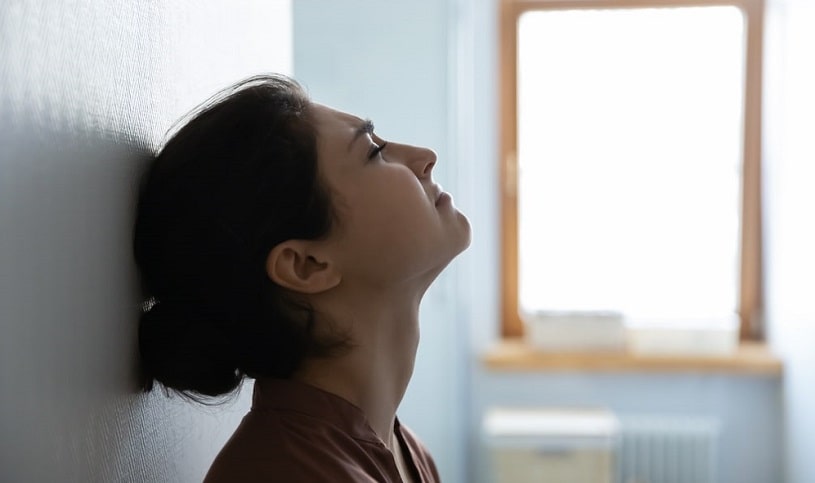 The apologies will make the fearful feelings die down. They will make victims understand that things will be different this time, and one must be available to help them. They will shower a victim with gifts and show that they truly love them. Meanwhile, the dangers of staying are very real.

Where To Seek Help for Addiction and Domestic Violence?

Remember that nobody deserves to be abused. In case of experiencing DV, victims should contact resources in their community to get help. The National Domestic Violence Hotline (1-800-799-7233) has several resources for assistance. If an individual is struggling with substance abuse and domestic violence, getting treatment in rehab is highly advised. Professional addiction treatment helps abusers find the root of issues related to the need for control leading to the cycle of domestic violence and substance use. Abuse survivors should contact a certified therapist to get help with processing the abuse, rebuilding the sense of safety, and beginning to live, instead of only surviving.