Norco Half-Life: How Long Does It Stay In Your System?

How long it takes for Norco to leave the system will differ from one person to another. While the half-life of Norco and individual factors may significantly influence the timeframe, it can be anywhere from 18-24 hours. Knowing Norco drug test information is fundamental, as medication may bring risks of dangerous side effects and interactions with several different substances. So, how long does Norco last in one’s system? How does it work? Can drug tests detect it? Read further to find out.

How Long Does Norco Last?

After using Norco, the drug’s analgesic effects should start to be felt in as little as 10 minutes after taking it orally. This is due to the fast onset of action of hydrocodone, which acts in 10 to 20 minutes. The acetaminophen component takes closer to an hour before its effects are felt.

Once the effects are felt, they last for about four to six hours. Both Acetaminophen and hydrocodone share a similar length of action when taken orally. However, hydrocodone can last as long as eight hours in some cases.

The half-life of Norco refers to the amount of time needed for half of the dose to be excreted from the bloodstream. As the medication’s ingredients include hydrocodone and Acetaminophen, it is necessary to consider both their half-lives.

The half-life of hydrocodone is approximately 4 hours. It is well absorbed in the gastrointestinal tract. Acetaminophen, on the other hand, has a half-life in the blood of 1-3 hours. Most Acetaminophen will be passed out of the system through the urine after 24 hours.

Norco drug testing is typically done for evidence of misuse. The presence of opioids like hydrocodone and their metabolites is what will show up on a drug test. If one has to be clear from this medication, he or she will have to wait for at least 18-24 hours. However, Norco drug testing detection may still vary significantly, depending on the area of the body being tested. Traces of this drug can remain in certain areas well beyond 24 hours.

Norco will reach its peak levels within approximately 1.3 hours. Blood tests can detect this drug up to 24 hours after intake.

A urine test is popular for screening and effective at detecting short-term use. The result of a urine test dramatically depends on the dosage used and its peak plasma concentration. The body can quickly excrete a 10 mg dosage of this medicine in the urine.

Evidence showed that hydrocodone can reach its peak concentration in the urine from 3.5 to 7 hours after the last use and can remain detectable for a range of about 2-4 days.

Like other drugs, traces of hydrocodone are detectable for the most prolonged period in the hair follicles, 90 days or approximately three months after intake.

Oral tests that use a swab to collect a saliva sample from the inside of the cheek can detect hydrocodone anywhere between 12-36 hours after the last use. However, the positive detection rate of hydrocodone is lower for oral fluid tests than for urine tests. 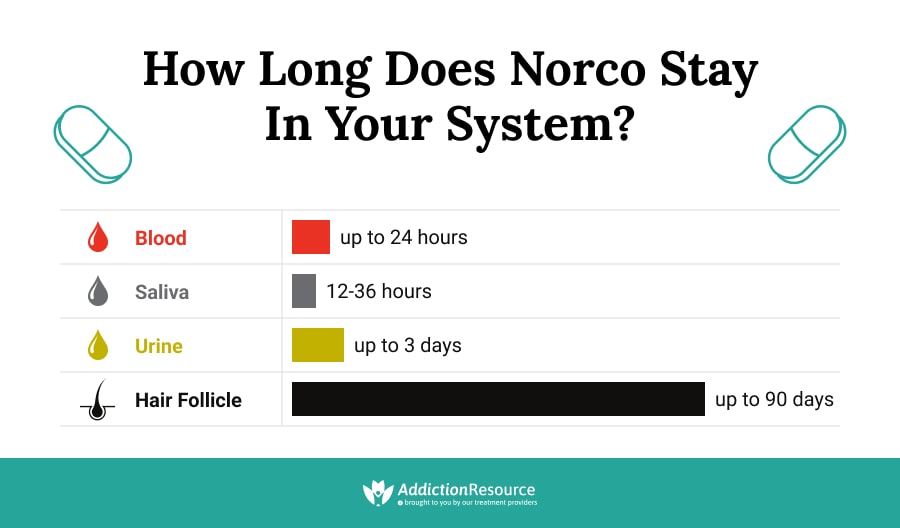 Norco is a combination medication consisting of an opioid Hydrocodone, and Acetaminophen. These two components act differently in the body and produce different effects.

Hydrocodone is an opioid pain-relieving medication and a cough suppressant. Like any opioid, it can cause addiction. It acts by blocking the brain’s nerve cells receptors responsible for giving rise to the pain sensation. The drug binds to the MOR (mu-opioid receptor) and the DOR (delta opioid receptors). By activating the MOR in the PAG (periaqueductal gray), hydrocodone inhibits the GABAergic tone on medulla-spinal neurons allowing them to suppress pain. MOR also contributes to sedation, respiratory depression, and suppression of the cough reflex.

Acetaminophen is a fever reducer and non-narcotic pain reliever. It acts by increasing the threshold to pain. In other words, the pain is felt when there is an increase in the nerve’s stimulation responsible for this sensation. By increasing this threshold, the pain will be perceived at less intensity than before. It also reduces fever by acting on the temperature-regulating center in the brain.

The hydrocodone-acetaminophen combination is efficient in improving moderate and moderately severe pain, therefore being frequently used for both temporary and chronic pain management. 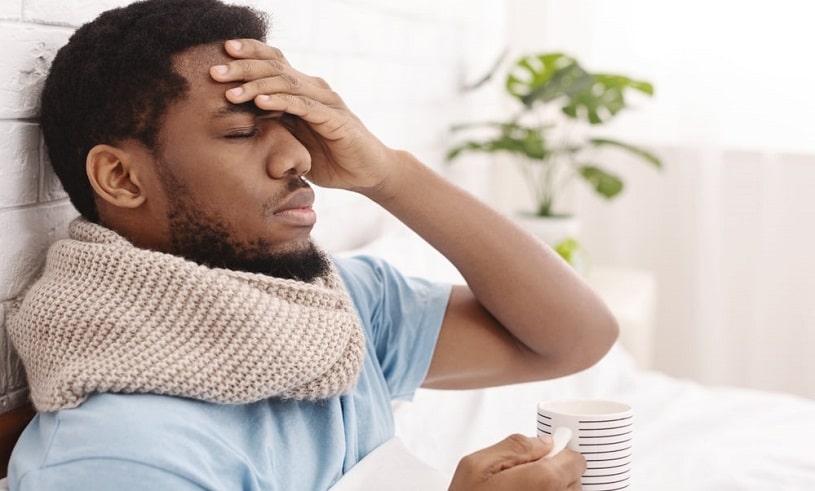 Factors Affecting The Duration Of The Drug In The Body

How long does Norco stay in your system? While two people can take precisely the same dosages at around the same time, excretion may still vary. That is because some individual factors can influence it.

Depending on the user’s age, some organ systems and other body functions may work better than others. The half-life of Norco is age-dependent as the rate of metabolism also changes over time.

Genes also play a huge role in determining how long it takes for drugs to get out of the system. Along with other opioids, this medicine is metabolized through two significant enzyme systems, CYP450 and UDP-glucuronosyltransferases (UGTs). Genetic variations, causing differentiation in the quality and quantity of coenzymes, can significantly affect how one metabolizes drugs.

Prescribed dosages also depend on one’s weight, height, and fat composition. Someone taking more than what is prescribed will take longer to get rid of hydrocodone from the system. The type of drug used is also significant because of varying strengths.

Norco drug testing detection is also affected by the rate of intake. Someone who has been using too much of it for months or years will take longer to get rid of the drug than people who have only taken a few doses. Frequent users of this drug can develop tolerance.

The usual concentration being used by regular people would yield less effect on them. It will result in taking more doses, making it extremely difficult to flush them all out from the system.

Both the kidneys and the liver are essential for drug metabolism and excretion. Well-functioning organs can be considered the safest and the fastest way to get drugs out of the system. Any damage in either organ will significantly affect and prolong the elimination process.

Another factor that may affect the eliminati the system is the use of combinations. Using Norco with alcohol may prolong their presence in the body and cause more side effects. The use of tramadol and hydrocodone together will cause a heightened effect. The same is valid when it is mixed with ibuprofen. This combination is often used for a short time, usually less than ten days, to help relieve moderate to severe pain. However, to reduce the risk of stomach bleeding and other side effects, they must be taken at the lowest effective dose for the shortest possible time.

There can be several reasons one might want to know about Norco drug testing and how long the drug can be detected in the system.

How to Get Rid of Norco From the Body

With all this Norco drug test information, one might want to know the fastest way to get rid of this drug from the body. There are several ways to speed up the removal of drugs from the system. It has to begin by cutting off the source.

However, this has to be done slowly because if one abruptly stops taking the drug, Norco withdrawals may cause anxiety, trouble sleeping, irritability, unusual sweating, and muscle aches.

Besides abstinence, another effective way to flush out the system from this drug is to take fluids regularly. Apart from water, herbal teas and fruit juices can also help remove toxins. Weight loss can help, too, because fat cells often serve as storage for poisons and drugs. Exercise can help burn fats and lose weight.

These are just some natural ways on how to get it out of the system faster. However, detox programs from the best drug rehabilitation facility, with the help of health care professionals, remain the most effective drug users’ treatments.