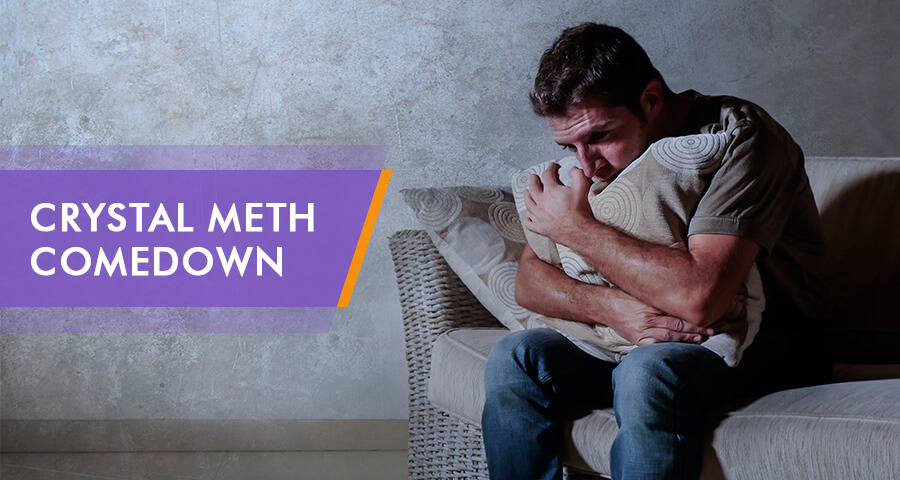 Amphetamines are a class of stimulant drugs used to treat medical conditions such as narcolepsy (a sleep disorder) and attention deficit hyperactivity disorder (ADHD). Some people become addicted to methamphetamine which is also known as meth, speed, crank, or chalk. It is a bitter-tasting white powder or pill. Crystal meth has the appearance of shiny whitish-blue rocks or shards and is commonly referred to as ice, crystal, rock, or glass.
People take methamphetamine by inhaling, smoking, or snorting the powder form, swallowing the pill form, or injecting the powder dissolved in a liquid such as alcohol or water. The high from the drug fades quickly, and in order to avoid the come-down, abusers often take repeated doses. This pattern of binging and crashing is called a “run” and can be extremely dangerous. How to come down off meth with a less painful feelings? Is there an ice comedown cure? What are the meth comedown symptoms in a first-time user? Read on to find out more.

It is one of the most highly addictive illegal drugs available on the market. There are an estimated 1.5 million active users of methamphetamine in the United States. The human body quickly develops a tolerance to the stimulant effects of this substance. Addicts experience extremely strong cravings. The most common effects of a crystal meth high include:

Methamphetamine has dangerous effects on the brain and central nervous system. It targets a neurotransmitter known as dopamine, which is the body’s pleasure chemical and is responsible for feelings of motivation and reward. Methamphetamine causes a large amount of dopamine to be released, resulting in the characteristic “rush” or high experienced by users.

The come-down from methamphetamine is just the opposite of the high. When someone binges on methamphetamine, they go through two distinct phases. The first is a high, followed by a low. The come-down corresponds to the low phase. After a single dose, the comedown is similar to a hangover following a night of drinking alcohol at a bar.
Both comedowns and withdrawals are caused by an imbalance in neurotransmitters in the user’s brain. A comedown, which is also called a crash or a down, is a common occurrence amongst addicts who abuse methamphetamine. It is a bit different and typically less severe than withdrawal symptoms which can be life-threatening. Nevertheless, the psychological strain of a methamphetamine comedown could lead a person to harm themselves or others.

Crystal Meth Comedown: What are the Symptoms?

Coming down off meth is associated with intense feelings of sleepiness, hunger, anxiety, and depression. A depressed mood or dysphoria is the most characteristic sign of meth come-down. These feelings of despair are often more severe than those seen with cocaine withdrawal or heroin comedown. Essentially, it is a short-term effect of excessive drug intake. During this phase, the blood level of the drug drops down drastically. The result is a series of unpleasant symptoms, including:

Other serious signs and symptoms when someone is getting off meth could include:

Hallucinations, delusions, and disorganized behavior are the hallmarks of stimulant psychosis. It is important to seek immediate medical help if someone has persistent signs of psychosis.
Long-term effects of sustained crystal meth use include dangerous health consequences such as restlessness, anorexia, dry mouth, headache, insomnia, gastrointestinal disturbance (diarrhea or constipation), convulsions, stroke, heart failure, and death. The drug has a severe drying effect on the skin and dry gums lead to grinding of teeth and jaw collapse. This gives users a characteristic skeletal appearance.

Meth Comedown: How Long Does It Last?

Methamphetamine produces a fast and intense high. The drug also wears off fairly quickly. This leads to an addiction because the user craves the feelings of euphoria. In general, the effects of methamphetamine last for about 8 hours. Once the drug begins wearing off, the user experiences psychological and physical symptoms.
How to come down from meth and how long does it take? Unfortunately, it is almost impossible to tell precisely how long a meth come-down will last. This is because there is a wide variation in the dose typically taken by addicts. The higher the dose, the longer is the duration of the withdrawal symptoms.
Most users tend to take the drug consistently to sustain feelings of euphoria and avoid symptoms of 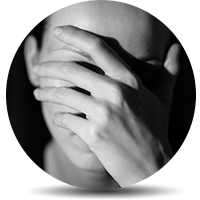 withdrawal. This is a dangerous practice that feeds the addiction. How to come down from crystal fast? An important factor that influences the duration of symptoms during withdrawal is how the person takes the drug. Injecting or ingesting it usually result in effects that last for up to 6 hours. On the other hand, smoking or snorting it extends the effects for up to 12 hours.
Withdrawal of methamphetamine after long-term abuse results in an inability to feel pleasure because of a lack of dopamine and dopamine receptors. It can take up to two years to restore dopamine balance in the addict’s brain. Methamphetamine addicts frequently relapse because they struggle with severe depression and are unable to continue recovery.

Meth Comedown Remedies: How to Come Down Off Methamphetamine

Unfortunately, there is no “miracle” medication crystal meth addiction that can make a come-down easy or erase the effects instantly. It takes time and effort for an addict to feel better again. Most of the approaches to addiction recovery from this drug are supportive in nature. The aim is to improve the addict’s general health and nutritional status. It is also a good idea to take some over-the-counter sleep aids when someone is trying to come off methamphetamine. Consider the following tips to ease meth come-down:

The keys to a faster recovery from meth come-down are good food, enough water, and quality sleep.
Many abusers of methamphetamines wonder how to come down off ice fast? There is an ongoing trend to use prescription sedatives or hypnotics, such as Xanax and OxyContin, to counter the high. This is an extremely hazardous practice and can be habit-forming. It increases the risk of overdose significantly. It is best to stick to over-the-counter sleep aids or sleeping pills prescribed by a healthcare provider. The key to a fast recovery from meth come-down is good food, plenty of water, and quality sleep.