Caffeine and alcohol are among the most used drugs in the world. Due to their widespread use, most individuals fail to note the potentially significant effects both drugs have on our health, such as the possible link between coffee and high blood pressure. Caffeine is a stimulant drug, while ethanol works as a CNS depressant. Combining both a stimulant drug and a depressant may have significant adverse health effects, which will be explored in this article.

What Happens When you Mix Alcoholic Drinks with Caffeine

Caffeine and alcohol have different effects on the central nervous system. Caffeine is a CNS stimulant that functions by acting as an adenosine receptor antagonist. Adenosine is a substance found within the brain which promotes sleep. By blocking the activity of adenosine at its receptors, caffeinated drinks promote wakefulness and act as a centrally-acting stimulant. 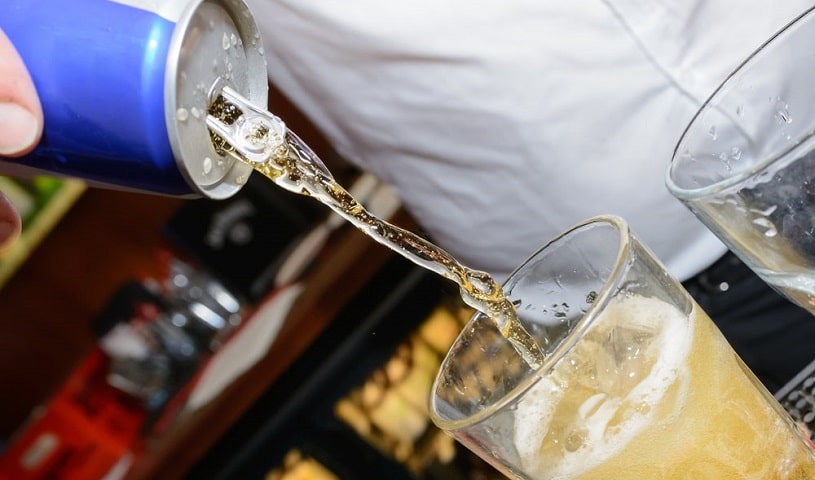 On the other hand, ethanol functions as a CNS depressant, but its effects are not as straightforward as that of caffeine. Ethanol affects several neurotransmitters within the brain. It causes CNS depression by enhancing the activity of GABA and inhibiting glutamate. GABA is an inhibitory neurotransmitter, while glutamate is an excitatory neurotransmitter. The net effect is slowing down the transfer of information within the brain. However, during the first hour, when blood-ethanol concentrations are high, ethanol triggers the release of dopamine, which has a stimulant effect, hence making drinkers become more alert when they first start drinking. After the peak, the high ethanol levels will begin to fall from two hours onwards, and objective measures of sleepiness begin to show up.

Current information indicates that the harmful health effects of ethanol can be exacerbated by mixing alcohol and caffeine, such as a coffee alcohol mix. Caffeine can antagonize the unwanted effects of ethanol by blocking adenosine receptors, which are mediators of ethanol’s somnogenic and ataxic effects. This, in turn, makes drinkers feel more alert than they should otherwise should by masking these effects. Drinkers become more intoxicated due to the delayed onset of these tell-tale signs of alcohol intoxication, increasing the risk of alcohol-related side effects and possible alcohol-related injuries. Hence the Food and Drug Administration does not recommend mixing caffeine and alcohol and has campaigned to educate both manufacturers and consumers on the potential dangers of combining both products.

Dangers Of Mixing The Two

Mixing coffee and alcohol is a dangerous combination. Evidence showed that by mixing coffee with alcohol, the risk of experiencing several adverse health effects increases, as well as the occurrence of risky behavior and also the possibility of alcohol-related injuries.

People who mix energy drinks and ethanol or consume coffee alcohol mixtures are also six times more likely to binge drink. Drinking too much can lead to a nasty hangover at best, and ethanol overdose or caffeine poisoning at worst.

Watch Out for the Following Symptoms:

In any of these adverse health events, immediate medical attention is required.

While some manage to appear normal or practice functional alcoholism while consuming more significant amounts of liquor with caffeinated beverages such as energy drinks daily, many get into an unexpected event, like a drunken-driving accident.

The findings of a study published in 2008 found that those who chose a caffeinated alcoholic drink such as Red Bull and vodka were two times more likely to get involved in accidents and are more than twice as likely to get a lift with a driver going over the speed limit. 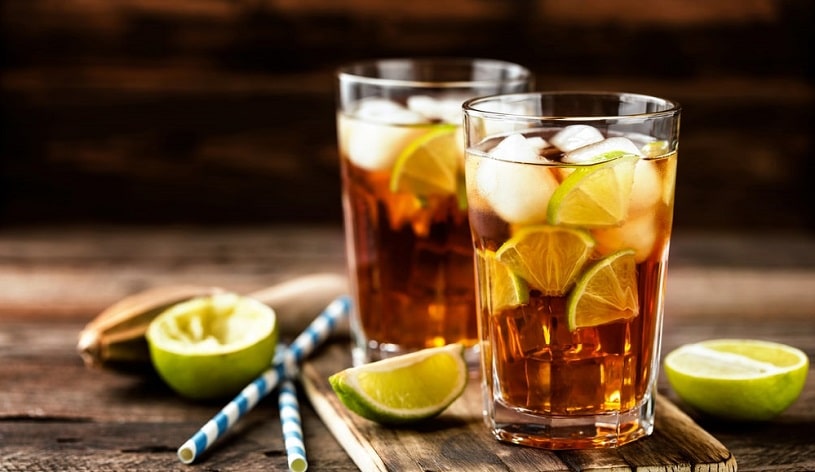 Others engage in promiscuous activities such as having unwanted or unprotected sex or sharing used needles, which increases the risk of blood-borne infections.

Ethanol and coffee are both diuretics, which means substances that increase the production of urine. Therefore a coffee alcohol mix may also cause dehydration in individuals who consume it. One may feel excessively thirsty, have a dry mouth, pass dark-colored urine, and feel dizzy.

Despite the release of guides on alcoholic drinks, mixing caffeine and alcohol became increasingly popular over the past few years. Restaurants and bars are now also offering many alcoholic coffee drinks as part of their menu. Coffee and alcohol mixing has become a common practice in the US, especially among young adults.

Energy drinks like Red Bull are also packed with caffeine, usually about 80 milligrams, equivalent to 3 cans of classic coca-cola or a mug of instant coffee. Therefore, mixing energy drinks with alcoholic drinks is not advisable because caffeine increases the total amount of alcoholic beverages consumed by masking the sedative effect of ethanol. Some studies have shown a positive correlation between alcohol and caffeine consumption among adolescents and college-age individuals.

Despite the health dangers of mixing caffeine with alcohol, several brands have introduced caffeinated alcoholic beverages. The FDA has issued warnings concerning such drinks due to the ability of caffeinated drinks to mask the sedative and ataxic effects of ethanol. It has been associated with an increased risk of consuming dangerous amounts of alcohol, getting involved in risky behavior such as having unwanted or unprotected sex, drunk driving, or riding in a vehicle with a driver who was intoxicated or sustaining alcohol-related injuries. The FDA has stated that enough studies have not been carried out to ensure the safety profile of caffeinated alcoholic beverage consumption among the general public.

Can Caffeine Help People Sober Up?

Caffeine’s ability to increase the perception of alertness and wakefulness has led to the idea that drinking a cup of coffee can cancel out the sedative effect of a pint of ethanol.

Studies designed to obtain more details about the effects of mixing alcohol and caffeine have varying results. Caffeinated drinks are believed to offset the acute effects of liquor, but evidence suggests that cognitive processes remain impaired when both an alcoholic beverage and coffee are co-administered. To diminish drunkenness, ethanol has to be metabolized by the body and broken down into inactive components. The body does this in many ways. Mostly, it is broken down in the liver by ethanol dehydrogenase and aldehyde dehydrogenase, which break alcohol down into acetate. 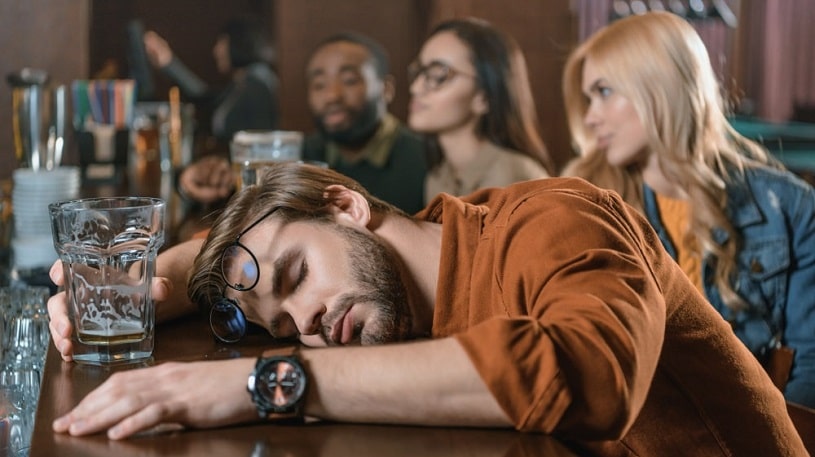 Does mixing coffee and alcohol help with ethanol overdose? No, despite popular belief, it doesn’t have any effect on ethanol toxicity.

Drinking coffee after drinking an alcoholic drink can make one feel less sleepy, but it will not accelerate ethanol metabolism or ameliorate its effects.

Combining coffee and alcohol is a practice that the US Dietary Guidelines cautions against. Another study published in 2002 found that large doses of caffeinated beverages can counteract the adverse effects of ethanol on memory, but dizziness remains. Therefore a coffee alcohol mix is not very effective in offsetting the negative impact of excess ethanol consumption and may increase the risk of acute alcohol intoxication.

While combining caffeine with alcohol is certainly not advisable, consuming low doses of caffeine and alcohol is unlikely to significantly mask the effects of sedatives like ethanol. Also, the half-life of caffeine ranges from 1.5 to 9.5 hours depending on how the individual’s body handles caffeine metabolism; therefore, consuming caffeinated beverages several hours before ingesting ethanol may still mask the effects of the ethanol to some extent. However, this is primarily dependent on the dose of each substance consumed, and the individual themselves as the alcohol and caffeine side effects may vary considerably among different individuals.

However, consuming a cup of coffee before going to a bar is unlikely to significantly increase your risk of engaging in risky behavior or sustaining alcohol-related injuries. Moreover, caffeine is not found explosively in coffee or energy drinks. A wide range of beverages and food items also contain significant amounts of caffeine, such as black tea, dark chocolate, Guarana seed, and so on.

Drinking too much liquor is pervasive in society, and its impact dramatically affects the quality of life, health, and individual productivity. Further complicating this issue is the common occurrence of consuming other substances with an alcoholic drink, including caffeinated beverages such as energy drinks and coffee.

As caffeinated beverages antagonize the effects of ethanol, it makes people feel more alert and capable than they are. This effect is said to be dose-dependent and increases one’s risk of drinking more than usual. It puts one at high risk of engaging in dangerous behaviors. Drinking caffeine with alcohol is highly discouraged, and yet even with this information, many are still indulging in rum and Coke at parties. Those who are dealing with a coffee addiction should seek help from professionals in rehab facilities. They will provide you with the medical expertise to deal with the alcohol and caffeine withdrawal symptoms, information, and support you need. Getting on the path to a healthier and sober life is achievable with the right treatment programs.