How Long Do Benzos Stay In Your System: MOA and Drug Testing

Benzodiazepines are central nervous depressants that are prescribed to treat anxiety, seizures, panic attacks, alcohol withdrawal and for inducing anesthesia. They are also used as muscle relaxants and to treat sleep issues and insomnia. Despite its potential benefits, failure to understand benzodiazepines mechanism of action or ignoring drug interactions can seriously endanger a patient’s life, with a high potential for benzo overdose leading to death. Based on figures revealed by the National Institute on Drug Abuse, about a third of all cases of opioid overdose also involve benzos. The time for which benzos stay in one’s system depends on the half-life of benzos and several other factors, as there are short acting benzodiazepines and long acting benzodiazepines.

Drug Testing: How Many Days Do Benzos Stay in Your System?

Benzodiazepines can be detected in the urine, blood, saliva, and hair samples of an individual during drug testing. Answering the question of how long do benzos stay in your system, one should notice that the detection time varies depending on the type of benzo being tested and the medium in which it is being tested. The average detection times of different benzos in various mediums are further described in the following sections.

How Long Do Benzos Stay In The Urine?

How long benzos stay in urine depends on their half-life. After it is metabolized by the body, about 1/5th of the medicine stays in one’s urine for some time. The detection time may vary depending on the medicine or its metabolite in the urine sample. For slow-acting benzos, the detection time is approximately two days. For intermediate-acting benzos, the drug test will be able to detect the drug for up to 5 days. A benzo urine drug test will be able to detect long acting benzodiazepines for up to 10 days after discontinuing the drug. A standard benzodiazepine urine test may not be able to detect every benzo or its metabolite. For such benzodiazepines, a urine drug test will be inconclusive, and other conclusive tests may be required for confirmation.

How Long Do Benzos Stay In The Blood?

How Long Does Benzodiazepine Stay in The Saliva?

A saliva test will be able to detect benzodiazepine in the saliva of an individual for up to 2 and a half days after its intake. This makes the detection window of saliva more than blood but less than urine. Saliva drug tests are relatively expensive and less common than blood, urine, or hair drug testing.

How Long Does Benzodiazepine Stay in The Hair? 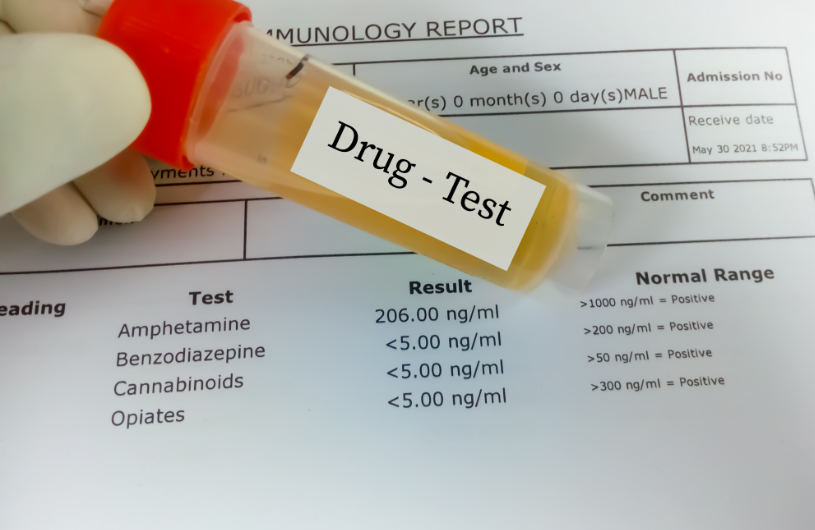 Do All Benzodiazepines Show Up The Same On A Drug Test?

What Can Cause A False Positive Drug Test Benzodiazepines?

Benzodiazepine drugs comprise several types of drugs with their mechanism of action and the types of disorders they treat. According to the study about the pharmacokinetic properties of benzos, the time drugs stay in the system and benzodiazepines half life is different and depends on its different types. Benzodiazepines can be classified into three categories, each having its own average half-life duration.

Factors That Influence How Long Benzos Stay In The System

Several factors affect the process of benzodiazepines elimination from the body. Some of these are general factors, whereas others are individual factors that vary from person to person. These are described in detail below:

Benzodiazepines mechanism of action work by the following:

Benzodiazepine structure is characterized to be a combination of a benzene ring and a diazepine ring. It is consistent across different types, and all deliver their therapeutic benefits by increasing GABA receptor activity, which, in turn, inhibits neuron function. This results in a calming effect.

Benzodiazepines Detox And Getting Drugs Out Of The System Safely

Based on the benzodiazepines mechanism of action, benzos can be beneficial in many ways if taken with care. However, patients should consult health professionals on how to safely get benzodiazepines out of the system. Such methods may include hydration, nutritional support and physical exercise to boost metabolism.

Benzos are powerful medications that can be addictive and the side effects of benzodiazepines can be quite annoying. This may be more likely if a patient takes it inappropriately or for a long time. It is critical to talk to an addiction counselor at a benzodiazepine rehab facility. They can teach ways to deal with the cravings, prevent relapses, since abrupt benzodiazepines withdrawal may be risky, dangerous to health, and possibly lead to life-threatening conditions. Finally, the addict will be on their way to a full recovery.